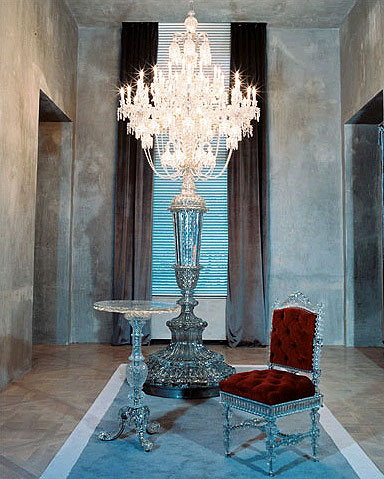 cutting end engraving – has been awarded the title of Master Artist presented by the Minister of Culture and Communication Mr Frédéric Mitterrand on November 22nd, 2011. Yves Parisse started in 1975 at Baccarat as apprentice cutter. Two years later he was promoted to the rank of cutter, a position Yves kept untill 2004. In 1982, at the age of 25, he was honoured with the title of Best Workman of France in the Cutting category. This title awarded every three years to the winners of a competitive examination on a set theme crowns a competence, a career path and high technical skills that are demonstrated by the execution of a masterpiece.

Concerning this nomination, Mr Markus Lampe, Managing Director of Baccarat, declared: “This distinction demonstrates the ability of Baccarat to ensure the preservation and passing on of its know-how, essential to keep up its heritage and preserve its creative dynamism. It reasserts the status of Baccarat, a luxury brand with a tradition of excellenc,e and  the symbol of a unique know-how”.

Jean-Claude Mathiot a Baccarat glassworker since 1998, was originally destined to be a cutter had been working several years with Daum and Artistar France before he joined Baccarat in 1998. Jean-Claude was awarded on November 25th, 2011, the medal of Best Workman of France, handed over by the President of the Republic Mr Nicolas Sarkozy at the Palais de l’Elysée. In 2003 Jean-Clause Mathiot was appointed assistant at the Best Workmen of France competition. This experience, repeated twice when fellow glassworkers from the factory applied for the examination, proved useful when he in turn decided to take part. In March 2010, he resumed his work as a workstation instructor. This year in May, Jean-Clause Mathiot successfully applied for the Best Workmen of France competition, in the hot glassworking group. It took him over 250 hours to complete his project with his two assistants, from its development to the different stages of the making, to give light to a unique, exceptional all-crystal piece. 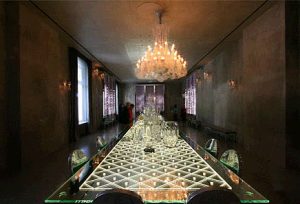 The friendly cooperation and competitive spirit of team work are essential to this man, who insists on the fact that “one needs to be pragmatic” and that “even bad times, for instance when you break a piece, are beneficial for they force you to put yourself into question and to go about it differently.”

Watching the factory’s other Best Workmen of France taught him a lot, he adds, and preparing the examination – a goal you set yourself very young – demands to take time to think about it, on top of humility and patience.  “There is no room for error, your sole enemy is yourself.”. Jean-Claude Mathiot is, in addition, corporal at the Volunteer Firemen Corps.

Concerning this nomination, Mr Markus Lampe added: “The factory, that will be celebrating its 250th anniversary in 2014, is perpetuating its know-how from generation to generation. Today, Baccarat can boast 24 Best Workmen of France, the highest number of elite craftsmen for a French luxury brand. This is a symbol of exceptional craftsmanship and unique know-how that will never end.”

Master Artist : this title was awarded for the first time in1994.  It distinguishes an exceptional intangible legacy by encouraging the handing down of skills. The Master Artists nominated this year particularly bring to light the collaboration between design and contemporary artists. Holder of an exceptional artistic know-how, Yves Parisse committed himself to passing it on to a qualified apprentice, who will in turn perpetuate the skills of the trade.

Best Workman of France : recognized the world over, this title is awarded every three years to elite craftsmen, the winners of a competitive examination on a set theme. It crowns a competence, a career path and high technical skills that are demonstrated by the execution of a masterpiece.