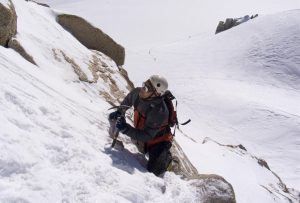 THE LAST GREAT ADVENTURE ON EARTH.
Zenith watches journey across the globe on the Pole2Pole expedition. North Pole to South Pole.

Precisely one hundred years ago, in 1911, Roald Amundsen became the first man to reach the South Pole. Fifteen years later, in 1926, he conducted the first confirmed exploration of the North Pole. With this dual accomplishment, the last unknown regions of the planet were reached and explored, begging the question: what other challenges remained for explorers in the future? A century later, however, there remains one feat that no one has yet accomplished: traveling the globe from one pole to the other. This Last Great Adventure, which is beset with all types of physical and technical difficulties, represents a journey of incredible extremes that the Swedish explorer Johan Ernst Nilson will undertake in just a few weeks when he sets off on his Pole2Pole expedition. Swedish explorer Johan Ernst Nilson is one of the most experienced explorers in the world today. He has successfully conducted 28 expeditions that have taken him to over 100 different countries around the world. Zenith Watches has entered into a partnership agreement with the Johan, an obvious alliance considering that Roald Amundsen also used a Zenith chronograph. And Johan Ernst Nilson, his worthy successor, is very likely the explorer who can best perpetuate the pioneer values and spirit that also drive the Zenith Manufacture.

The adventure which Johan Ernst Nilson is about to embark on is a true modern odyssey that will represent the last chapter in the history of the conquest of the poles. The schedule the Swedish explorer has set for himself, however, would cause even the toughest of athletes to cringe: starting at the North Pole on March 30, Johan will walk 200 kilometres over the Arctic sea ice to the Svalbard Archipelago to the east of Greenland. From there, he will travel and sail through the Arctic Ocean to Canada and then bicycle south through both North and South America, passing through the Amazon jungle along the way and arriving finally in Patagonia. He will set sail again to Antarctica where the last leg of his trip will begin—a two-month journey on skis and by parafoil to the South Pole. The entire journey should take about one year to complete—one year to travel through every degree of latitude on earth, starting at the northernmost point on the globe and finishing at the exact opposite southernmost point. 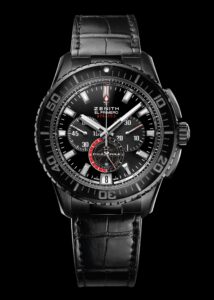 To accomplish a feat such as this, Johan Ernst Nilson must be able to rely on exceptionally resistant and stable equipment, capable of withstanding not only extreme conditions, but also massive variations in temperature and humidity. Precise timekeeping is key in such a long adventure, where success depends on progressing at a perfectly regular pace, even in climes such as those found above the polar circles, where the typical reference points used to mark the passage of time can no longer be relied on. Faced with these problems, which watch manufacture could Johan Ernst Nilson possibly choose to accompany him on his adventure other than Zenith? The Swiss brand has founded its reputation on the precision, accuracy and stability of its timepieces, even in extreme conditions (one of its chronographs, the El Primero Striking 10th caliber, is currently functioning in orbit around the earth on board the International Space Station!). For this reason, zenith watches have played a role in the history of polar explorations for a century now: Roald Amundsen, who conquered both poles, also used a Zenith chronograph watch, and most recently, the brand joined forces with Jean-Louis Étienne, the French doctor who flew solo over the North Pole in a balloon. The partnership between zenith watches and Johan Ernst Nilson represents the continuation of an already prestigious history of accomplishments that will very likely enable us to further refine our expertise in extreme technology.

In today’s world, the worrisome issues linked to global warming should be a cause for alarm for each one of us. The Pole2Pole project set outs with the ambition of increasing the public’s awareness of climate change. For example, the expedition will be able to observe first-hand the accelerated melting of the Arctic sea ice. Obviously, an environmentally friendly adventure such as this would make no sense if it also affected the climate adversely, even in the slightest way, which is why the Pole2Pole project will be “Climate Neutral”. This means that Johan Ernst Nilson, who likes to call himself the “environmental explorer”, will make the entire journey using nothing but the energy provided by the forces of nature—water, wind, and the sun—and, of course, his own muscles. His use of a chronograph whose steadfast operation relies solely on the power stored within its mechanical movement symbolizes the care taken on this expedition to use only clean energy. This partnership reminds us that Zenith Watches has long supported environmental causes throughout its history: the brand accompanied the “Prince Savant” and oceanographer Albert 1st of Monaco as he laid the foundation of ecology as a discipline. Over the last several months, Zenith Watches have had a part in the development of Alain Thébault’s Hydroptère, the high-tech sailing craft with an exceptional level of performance. This fast and totally self-propelled means of transport could revolutionize intercontinental passenger service in the future.

It is natural that Johan Ernst Nilson shares a personal connection with the Zenith watch brand: since the very beginning, the brand has accompanied discoverers on their adventures: sailors used Zenith marine chronograph watches during their expeditions to calculate their ships’ position at sea; later on, pilots would use Zenith chronograph watches to guide them in their exploits. Most of all, however, the Zenith Manufacture has always shown its unflagging spirit of discovery by constantly setting out to go beyond the limits that others deem insurmountable: a pioneer in high frequency, Zenith is the inventor of the El Primero chronograph caliber, the most accurate automatic movement in the world. It is the only production caliber that beats at 10 vibrations per second; its closest competitors beat at only 8 vibrations per second.

Johan E. Nilson will wear a special edition El Primero Stratos on his wrist during his Pole2Pole journey. Designed to withstand the harshest of conditions, this crafted chronograph will be tested in the most hostile conditions on earth. Only 500 of these numbered Stratos Pole2Pole limited-edition chronographs will be produced.