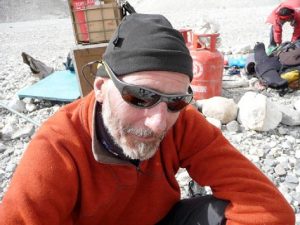 Since its very beginnings, Zenith Watches have accompanied Explorers, Discoveres and all those who seek to go beyond the bounds of existing limits. It has guided sailors on their seagoing expeditions, when marine Zenith chronometers were used to calculate the positions of ships in the sea ; and it has also aided pilots. But above all, the Zenith Watches have always demonstrated a tireless spirit of discovery! Now in its latest adventure Zenith Watches will assist world renowned climber Antoine Cina to achieve his goal of climbing to the very top of Mount Everst and subsequently pagaglade off the summit and back down.

The pilgrimage of the seven summits
Antoine Cina has decided to take on the dream of many born mountaineers : to climb the ‘Seven Summits’ – the highest peaks on the seven continents on the planet. The adventure began in Africa when he climbed Kilimanjaro and continued in South America on Aconcagua (6,962 m) ; then ultimately on Mount McKinley in North America (6,194 m), in extreme conditions, since the descent on skis took 12 hours along a gully between crevasses called the ‘Orient Express’ – a 1,000 m drop with a continuous 42° gradient. Antoine Cina then felt up to taking on the highest summit on the planet – Mount Everest (8,848 m), which he climbed from the Tibetan side, with an international team.

Take off from the highest point on the planet
Once he had come down from the top of the world, Antoine Cina could have chosen to pursue his Seven Summits pilgrimage – an epic journey that he will indeed continue after his next feat – by taking on the last three : Mount Elbrouz in Europe (5,633 m), Mont Vinson in Antarctica (5,140 m) and the Carstensz Pyramid (4,484 m) in Australia. But the call of Everest, and his current excellent mental and physical condition after ten days of climbing, gave him the idea of this new challenge – to return to the world’s highest summit and attempt to take off on a paraglider. 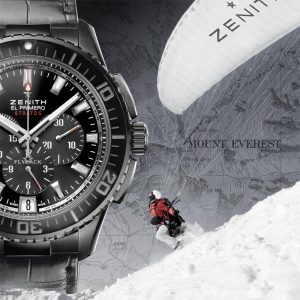 Everest 2011
Following two years of preparation, Antoine Cina is going back to Everest on a second expedition that will begin on April 23, 2011, with the same international team that participated in 2009. He will follow the same Tibetan route. The expedition will need about a fortnight to reach its Base Camp in the village of Rongbuk, situated at 5,050m. After this, they will take about another ten days to reach the summit via the North Col at 7,000m. Antoine Cina will carry two Zenith flags in his baggage: the first to be raised at the Base Camp ; and the second on the summit of Everest. Here, right on top, 25 days after the start of the expedition, he will attempt the challenge that is his reason for returning to the highest point on the planet – namely, to take off on a paraglider emblazoned with Zeniths starred logo.
The expedition will be covered on a daily basis by journalist Nathalie Lamoureux from the French weekly Le Point, who will post reports and videos on the climbers’ progress on www.lepoint.fr.

These interviews and videos will be transmitted by the Arab station, Aljazeera, who are following a member of the expedition sponsored by the Emir of Qatar. Finally, Antoine Cina himself will be equipped with a camera in order to transmit pictures of his take-off and his flight. These images will circle the globe!

Antoine Cina, a life dedicated to mountains Like all Zenith Watch ambassadors, Antoine Cina is first and foremost a man driven by a passion. Born in Montana in 1955, he has always lived from, and for the mountains. He gradually turned to ski mountaineering, which he practised to competitive levels. His expertise in this domain has resulted in him being an international judge at ski mountaineering competitions. He was also head of the Crans Montana mountain rescue team.

Subsequently, depending on the acclimatisation process, a climb is planned directly to the designated advance base camp (6,400 m), where a rest for at least four days is on the agenda. Following this, climb to 7,000 m on the North Col and spend the night there. Come back down to 6,400 m to pick up equipment, and await an ideal window in the weather, in order to reach the summit between May 19 and 23.
Go back up to 7,000m for one night, then climb to 7,700m for another night. Finally, climb to 8,300m to the last camp for a 6-7 hour rest, followed by the climb to the summit at 8,848m before the big paraglider jump.
Weather permitting, the flight will last 45 minutes from the summit to the advanced base camp at 6,400m!
Here, a couple of nights will be spent before returning to 5,500 m and then 5,050 m, the meeting place with the vehicles, to drive back to the
Nepalese border and Kathmandu.