Need inspiration for your barbecue? Alabama’s the place to go, with a BBQ trail that features more than 100 restaurants on a smartphone app, based on the book “Alabama Barbecue: Delicious Road Trips.”

As well as restaurants with secret sauces and others with the best side dishes including decadent macaroni and cheese include gas pump BBQs; the perfect pit stops on a BBQ road trip. Need something to drink? Follow the craft beer trail in the foothills of the Appalachians.

There’s much more on Alabama’s menu, too, with soul food and slow-cooked Southern dishes, some of it served in traditional ‘meat and threes’ (meat with a choice of three side dishes), which were originally established to replicate farm food for office and factory workers. Expect the freshest seafood on the Gulf Coast and gourmet dining in Birmingham, aka the Dinner Table of the South.

Visit the hotdog shop in Montgomery that has served everyone from Elvis to Franklin D. Roosevelt and eat in the place that inspired the book and film “Fried Green Tomatoes at the Whistlestop Café” in Irondale. And, for somewhere a little different, dine in a cave at Rattlesnake Saloon or head to Ezell’s Fish Camp in the city of Lavaca to enjoy fried catfish and hush puppies in a historical wooden cabin that was once a trading post in the American Civil War.

Gas pump pit stops
While the food at UK petrol stations might conjure up images of roadside sandwiches or fast-food joints, Alabama excels at the gas station BBQ. 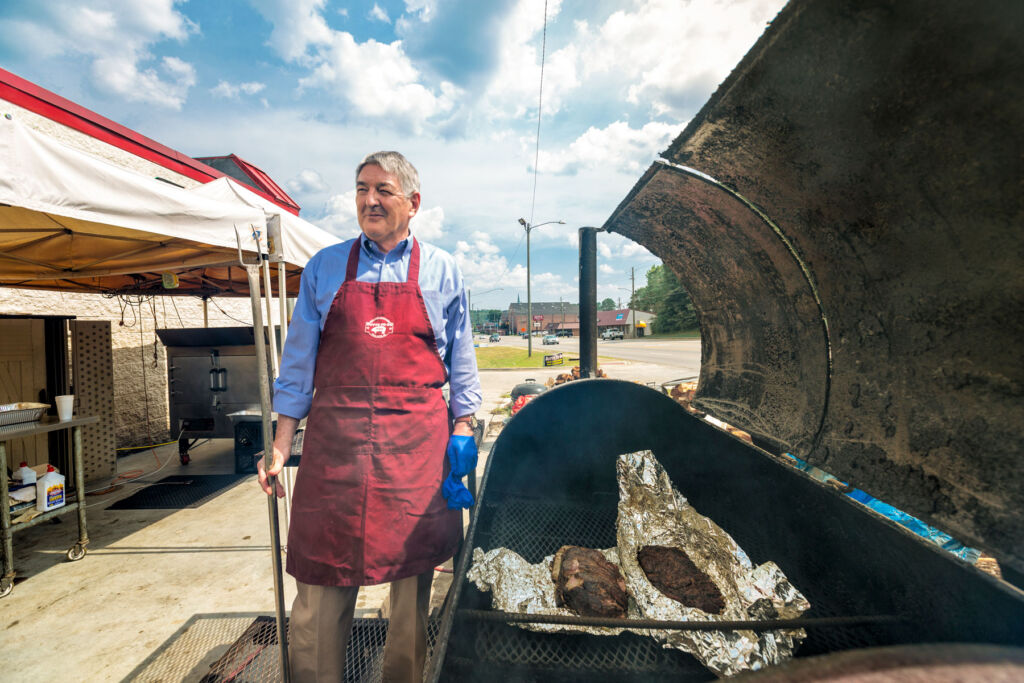 Take in four of them on the five-hour drive from Pell City heading south to Foley on the coast. Start at Butts To Go at a Texaco garage in Pell City, which slow cooks its pork, brisket and chicken over hickory; call ahead if you want to order the drunk chicken, with the meat cooked over a can of beer for three hours. A two-hour drive leads to the Shell service station at Greenville, and BBQ 65, known for its variety of side dishes, from butter beans to fried okra; the mac and cheese gets rave reviews.

Be sure to arrive before lunchtime is over at Soul Ful Deli Depot in Fairhope, a couple of hours further south, as it closes after that. Within the Chevron gas station, its menu changes daily, but with chicken wings in 12 flavours on offer, there’s certainly something to suit everyone’s taste buds. Another Chevron station is the home to the nearby Depot in Foley – you’ll know you’ve come to the right place when you see the huge plastic pig in front. Smoked for 12 hours, its pulled pork is fantastic. 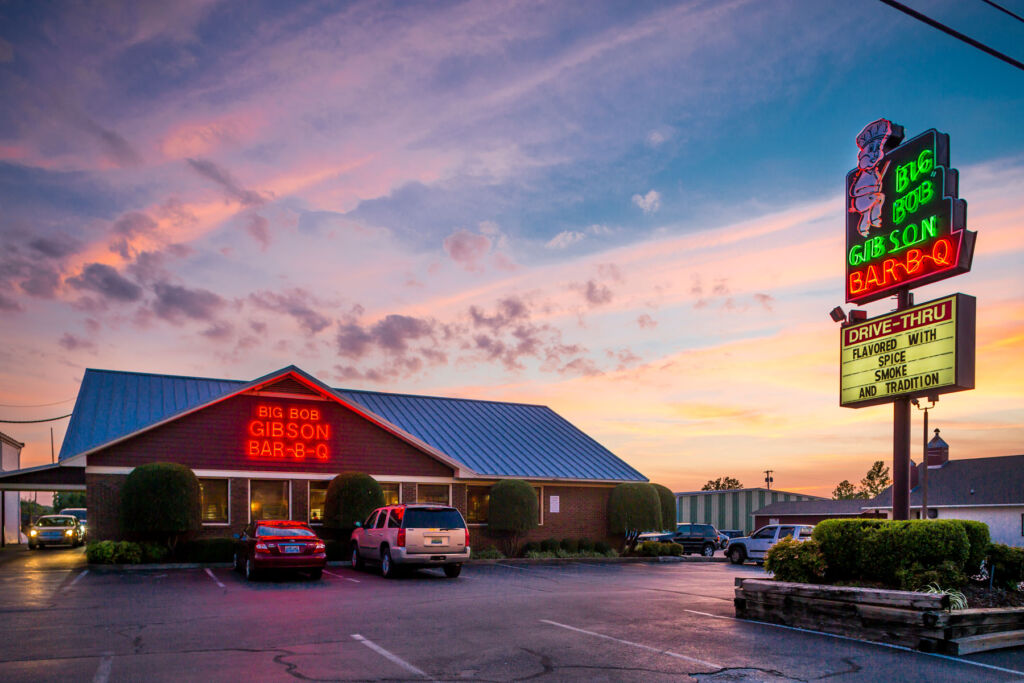 It’s all in the sauce
At Big Bob Gibson Bar-B-Q in Decatur, Bob developed the Original Alabama White Sauce in 1925 because he felt the traditional vinegar-and-mustard-based sauce didn’t work with chicken. Now Bob’s descendants are keepers of the flame and have won five grand championship titles at the Memphis in May World Championship Barbecue Cooking Contest, the Super Bowl of barbecue. 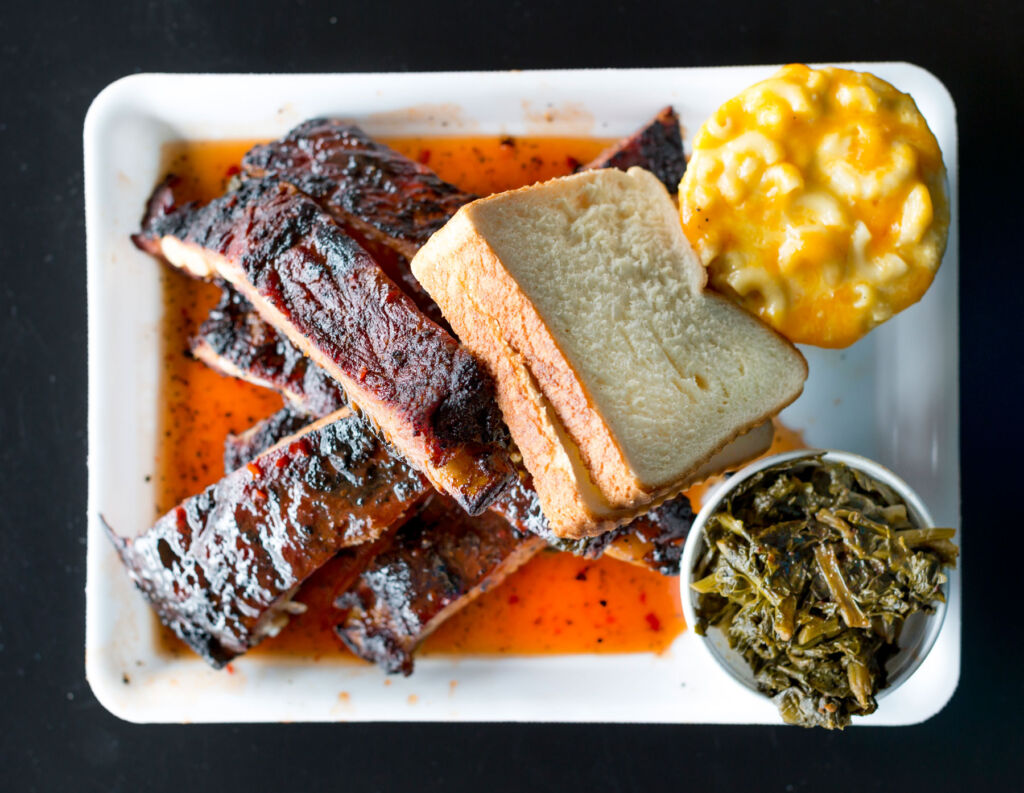 At SAW’s, short for Sorry Ass Wilson, the moniker founder Mike Wilson earned himself in high school; they make a vinegar-based secret sauce that is thinner than most and is good for dipping. Try it in one of the Birmingham restaurants or buy it bottled in shops across the US.

BBQ specialities – pig ears and camp stew
Pig’s ears are the biggest seller at Brenda’s Bar-B-Q Pit, a small brick building with a take-out window that opened in Montgomery in 1942. The speciality at Brooks Barbecue in Muscle Shoals is the homemade slaw which tops its pork and chicken sandwiches, while at Dobb’s Famous Bar-B-Que in Dothan, the side of camp stew, which reportedly was first created in Alabama, is the dish they say will never leave the menu.

The house favourite at George’s Steak Pit in Sheffield is the special ribeye, grilled over hickory wood in a well-seasoned open pit and served inside with candles and white tablecloths. And at Full Moon BBQ, throughout Alabama and Mississippi, it’s the Full Moon cookies that get the customers raving – they feature in the list of 100 Dishes to Eat in Alabama Before You Die .

Slow cook or fire it fast?
While many a Southern barbecue favours the low-and-slow method of smoking meat, cooking it for up to 12 hours, at Archibald’s BBQ in Northport and Greensboro, they say that if you know what you’re doing, a 45-minute blast over a bed of hot hickory is ample.

Ribs are grilled in a brick pit behind the front counter and are served with sliced pork and white bread with an orange sauce as part of the mixed plate. 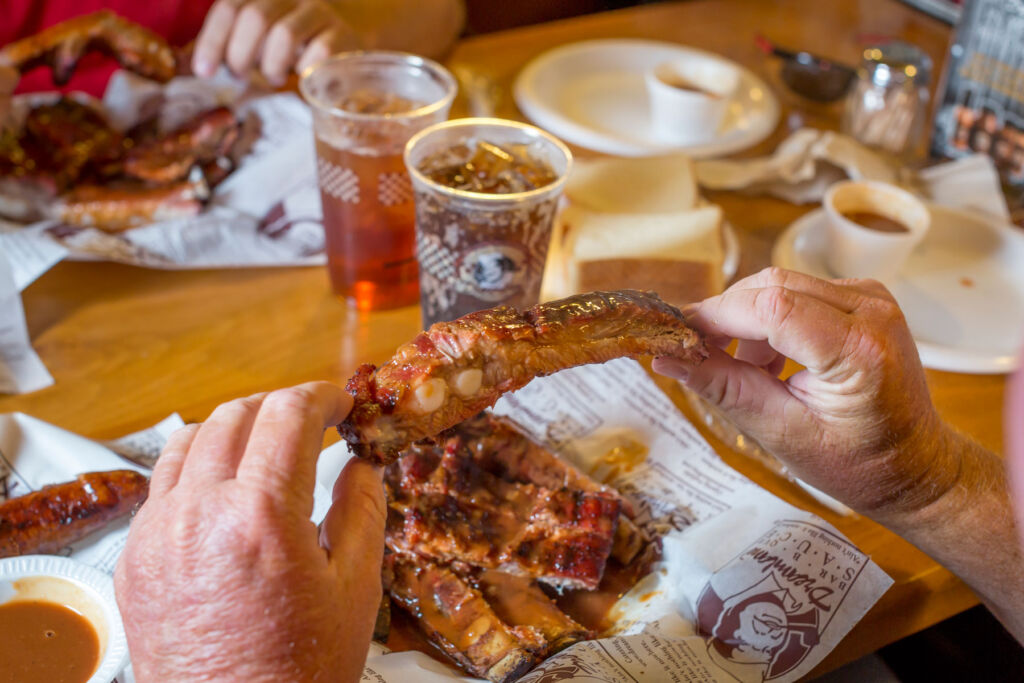 The dream BBQ
It was a dream that prompted John’ Big Daddy’ Bishop to build a restaurant next to his home in Tuscaloosa back in 1958, which was consequently named Dreamland. Now his hickory-fired ribs are served in 11 locations; in Tuscaloosa, you can still see his big red chair where he held court with customers for four decades.

Beer for your barbie
Wash it all down with a beer on the North Alabama craft beer trail. Try Peanut Butter Porter and Truck Stop Honey Brown Ale at Back Forty Beer Company in Gadsden and enjoy a flight of four beers in a post-prohibition era brew house and taproom at the Bowler Hat Brewing Company in Huntsville.

Don’t miss Straight to Ale with its Monkeynaut IPA, whose label features a monkey in a space suit as a nod to Huntsville’s U.S. Space and Rocket Centre and the harder-to-come-by Unobtanium – an old ale aged in bourbon barrels. Prefer wine? The North Alabama wine trail features six wineries, including White Oak Vineyards, which makes sparkling muscadine, and fruit wines featuring strawberries, blueberries, blackberries and peach. 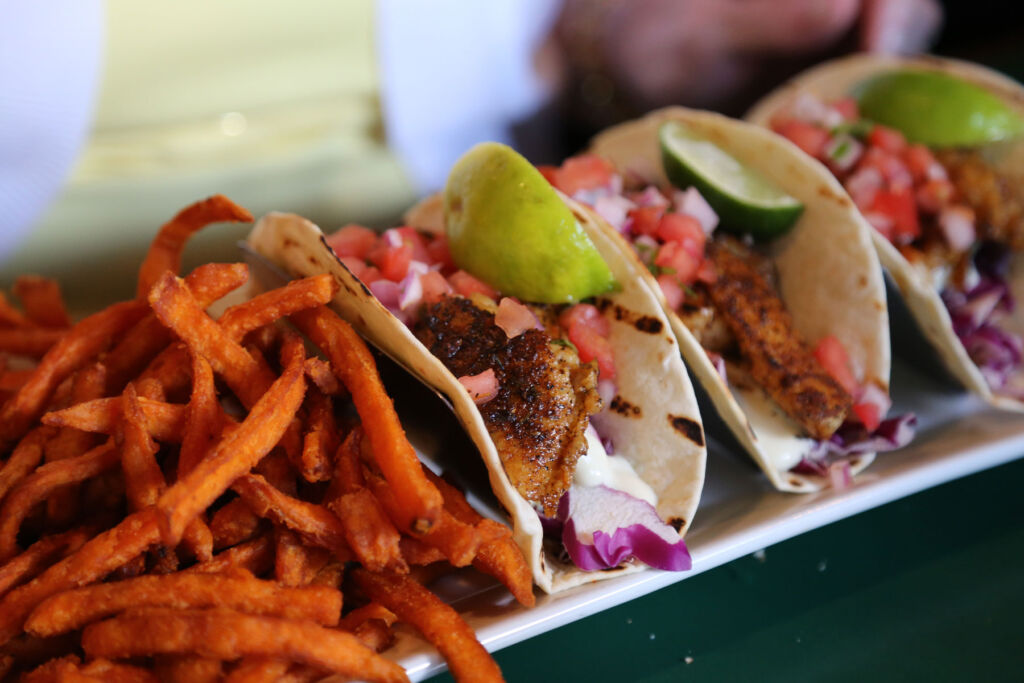 Stacks of seafood
Sup on the freshest of seafood on Alabama’s Gulf Coast. Try the Royal Red shrimp, which is tastier than other varieties, or fish for your supper at Orange Beach, the Red Snapper Capital of the World, where many restaurants will cook your catch for dinner. Some of the state’s best seafood is in Mobile, along the causeway just outside town.

Several hours inland is the historic cabin once used as a trading post during the Civil War that is now Ezell’s Fish Camp, where you can enjoy fried catfish and hush puppies – deep-fried corn balls.

Hot dog and fried green tomato fame
Everyone from Elvis and Clark Gable to Franklin D. Roosevelt and George W. Bush has eaten at Chris’ Hotdogs, which has operated in Montgomery since Greek immigrant Christopher Katechis opened it in 1917. Its famous chilli sauce remains a closely guarded family secret.

And what started as a hotdog stand in 1928 became the restaurant whose name became famous after Alabama author Fannie Flagg wrote “Fried Green Tomatoes at the Whistle Stop Café.” There are still fried green tomatoes on the menu and buttermilk fried chicken.

Go gourmet in Birmingham
Known as The Dinner Table of the South, Birmingham is home to one of America’s best restaurants. Highlands Bar and Grill won the prestigious James Beard* award as America’s Most Outstanding Restaurant in 2018. Its French-inspired Southern food might include dishes featuring soft-shell crabs or venison and quail. The Hot and Hot Fish Club, also a James Beard Award winner, is another of Birmingham’s many gourmet restaurants. Bag a seat at the chef’s counter to sample its blend of Southern, French and Californian cuisine.

Dine in a cave
A unique eatery nestled beneath a natural stone bluff that once sheltered Native Americans, Rattlesnake Saloon in Tuscumbia might feature snake tails on the menu (actually fried green beans), but the nest of serpents that gave the place its name has long since gone. Among the burgers and sandwiches on offer is the $60 Gigantor – if you eat the 2lbs of Hereford beef plus ample sides of fries and onion rings in 45 minutes, it’s on the house.

After that, you may want to rest at the sister venture, Seven Springs Lodge, a great base for hiking and riding. Stay in a converted silo or cabin for $150 for 4-6 people.