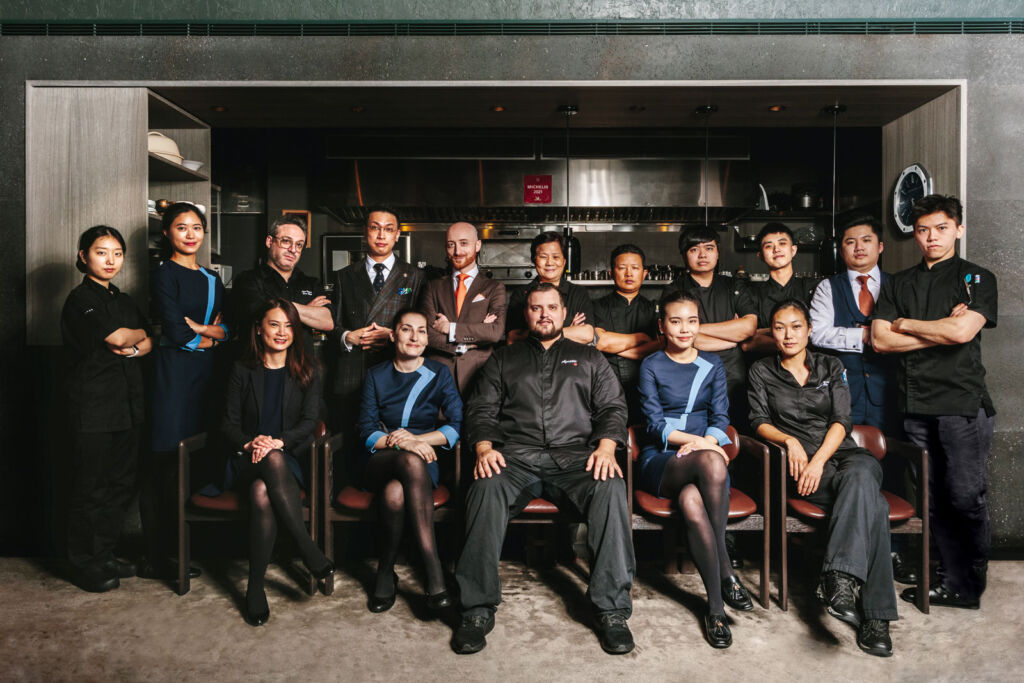 Japanese and Spanish cuisine is not the most obvious bedfellows, but that’s not what Chef Augustin Balbi and his team at Andō think. The restaurant is known for its expertise in both cuisines and has recently unveiled its new seasonal menu.

The Spanish x Japanese restaurant Andō opened in July 2020 with the JIA Group and is now in its second year. Since its opening, it’s gone from strength to strength, earning a Michelin Star after only six months and retaining it. Its continued success is a testament to the team’s pursuit of gastronomic excellence and the chef’s deeply personal cuisine based on his Spanish roots and training in Japan. 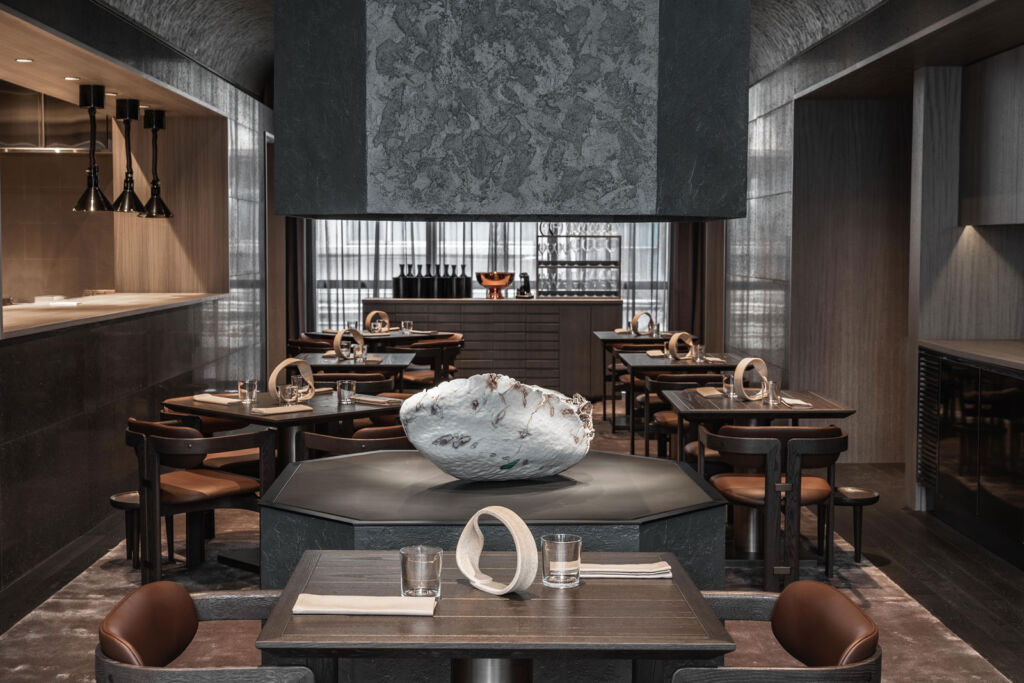 The continued evolution of Andō’s Innovative Spanish x Japanese cuisine
Derived from Chef Agustin’s Latin surname Ferrando, Andō in Japanese connotes a sense of relief, while in Spanish, it is the equivalent of ‘-ing,’ the verb participle to describe the act of doing in the present. Agustin was born into a Spanish and Italian family. His passion for food was borne at his grandmother’s dining table, where fond childhood memories of his late Lola’s homemade dishes would inspire much of his innovative cuisine today at Andō. 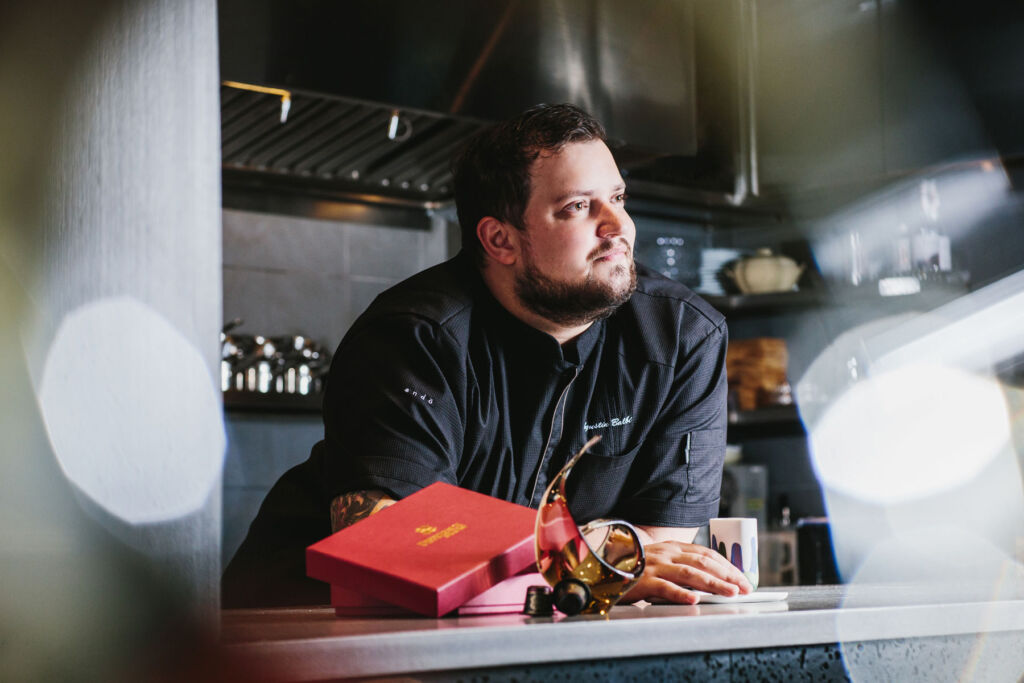 During his formative years as a chef, Agustin’s rebellious streak took him eastwards to Japan, where he honed his craft in Tokyo’s veritable kitchens, including 2 Michelin-starred Zurriola, 3 Michelin-starred Nihonryori Ryugin and 2 Michelin-starred Cuisine Michel Troisgros. Aside from shaping his culinary philosophy, Agustin’s time in Japan holds a special time in his heart, as the place where he met the love of his life Yoshika, now his wife and the mother of his two children.

Andō’s modern Spanish x Japanese Tasting Menus
Andō’s modern tasting menus contain complexity and diversity, inspired by his ancestral roots while gazing at the lands that shaped his craft – Japan. With no printed menus in the restaurant, guests leave the fate of their meal in the chef’s hands. Every course is deeply storied and grounded in the precious memory of Chef Agustin’s unorthodox journey as a chef, and new dishes include: 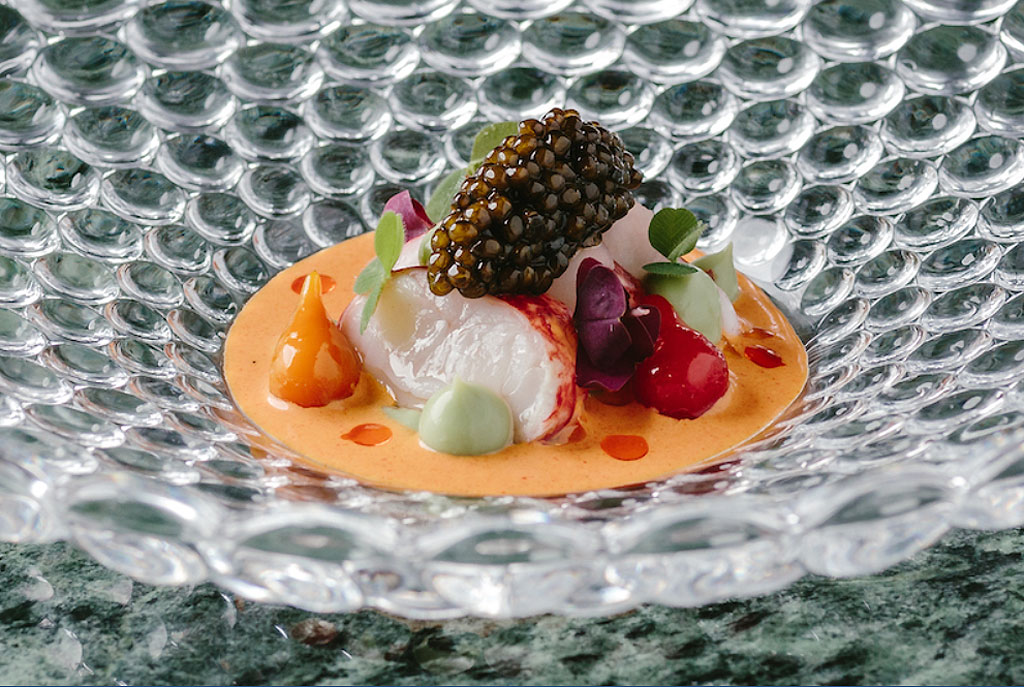 Tardes en Palermo – This takes its name from the largest neighbourhood in Buenos Aires, where the chef began his training in a Nikkei restaurant, Osaka Buenos Aires. This course highlights French Blue lobster, cauliflower, Kristal caviar, Spanish plankton, baby peppers for the sweet notes and a roasted piquillo pepper sauce for a deep umami flavour.

Que Raro Este Flan (What’s Wrong with This Flan) – This dish was inspired by Chef Agustin’s afternoons playing football with his friends, after which he would enjoy a snack of sweet, homemade flan. At Andō, Chef showcases a savoury version of this nostalgic treat with Japanese Ama Ebi, which is steamed in chawanmushi egg custard with umami from clams. 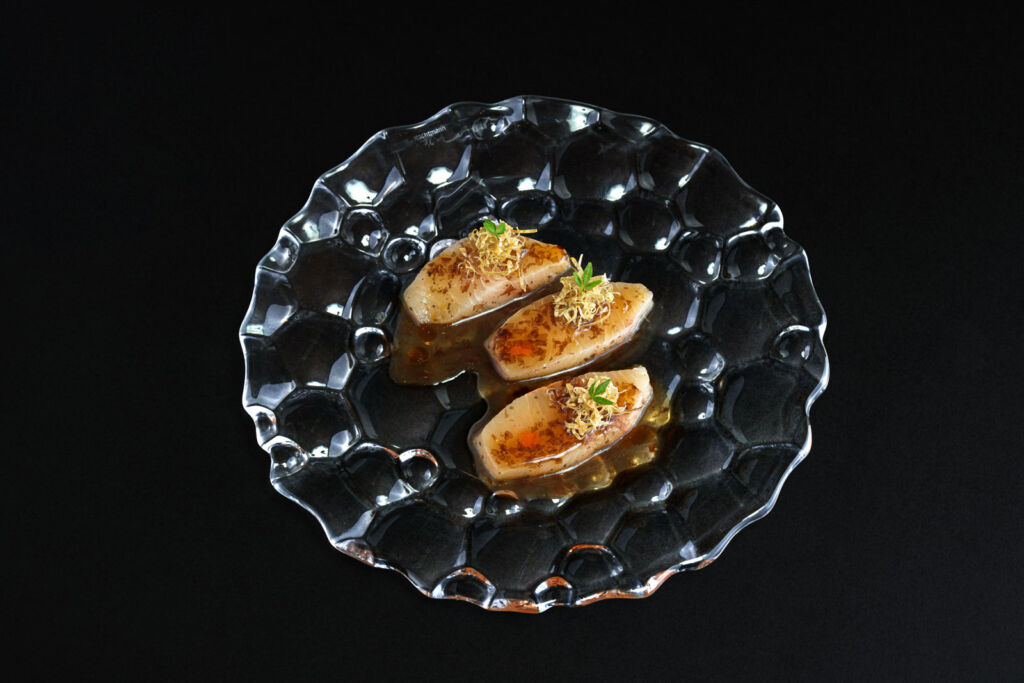 Departir (Departure) – Agustin left home for Japan to learn how to treat and cook seafood, marking an important milestone in his culinary journey. An expression of his learnings from Japan, PARTIR showcases a selected seasonal fish cured with black olive salt, seasoned with mirin and soy sauce, and crispy batter kombu. In a traditional Japanese high-end Kaiseki cuisine, Otsukuri is a raw fish course, showcasing one of the 5 Japanese main techniques. As Ando is not a traditional Japanese restaurant, this dish is not an Otsukuri dish but an illustration of Agustin’s travel and experience.

Cien años no son Nada (Hundred Years are Nothing) – The sourdough and brioche selection of bread deserves its own course at Andō, served with a unique trio of salted butter, white sesame butter and seaweed butter. Guests are also served an exclusive Spanish olive oil made from trees over 1000 years old.

Medio Mundo (Half World) – Named after the fishing net that Agustin used to fish with his father on their summer break, Medio Mundo is a new stunning showcase of line-caught seabass prepared with Agustin’s training in Japan, served with white beans, Tocino Ahumado (Spanish Smoked Bacon) and Japanese nameko mushrooms Cocido. 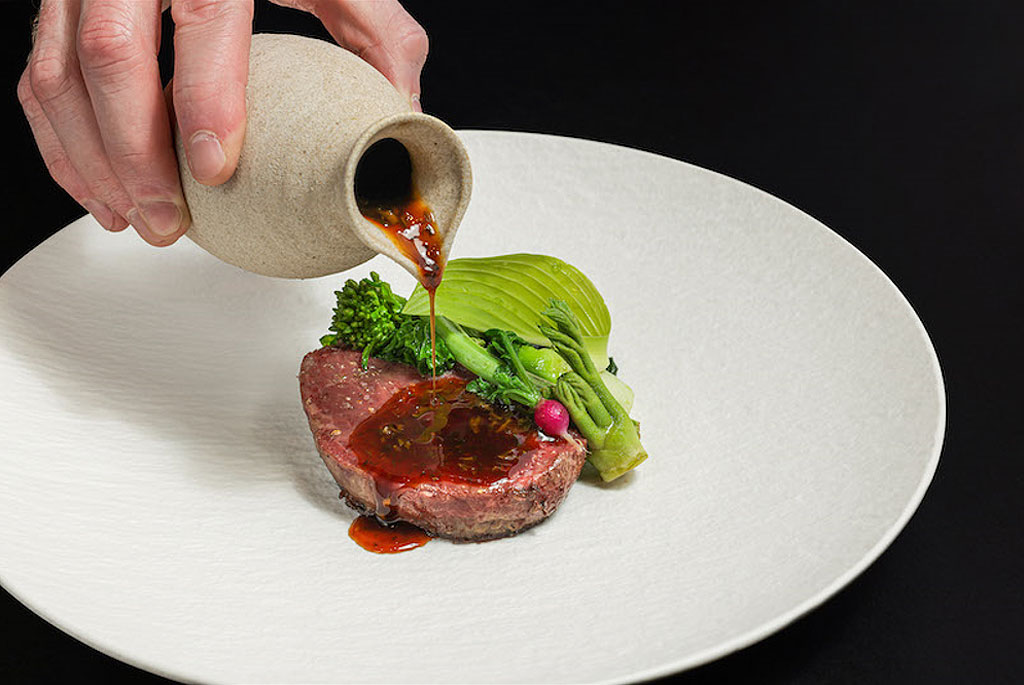 Risas Del Jardin (Garden’s Laugh) – As a child, Agustin often spent Sundays having Asados (grilled meats) in the back garden with his family and friends. This course is a nod to Agustin’s predilection for grilled meats and features his country’s Argentinian Hereford beef dry-aged for 21 days, served with seasonal Japanese mountain vegetables, served with a rich, vegetable beef sauce. 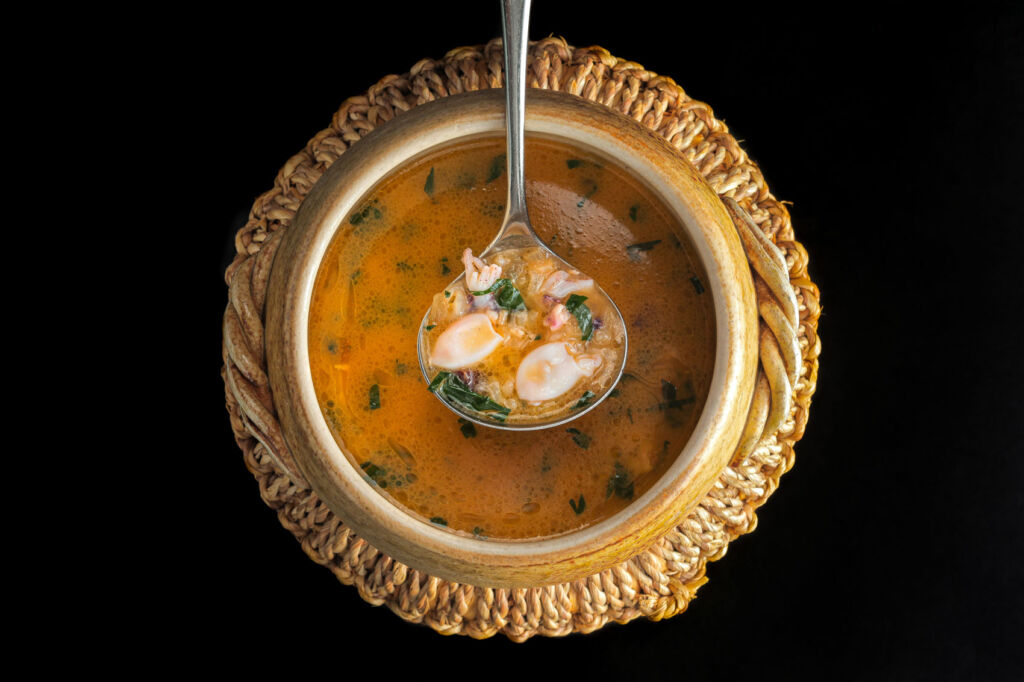 Sin Lola (Without Lola)- Agustin’s take on Spanish Arroz Caldoso, SIN LOLA is a loving tribute to his late Spanish grandmother, Lola (nickname for his grandma), who often made this for lunch after school and who inspired him to pursue his culinary career. An enduring signature at Andō, the new winter iteration features Hokkaido Yumepirika rice with Brittany blue lobster, Cecina, snow crab and chilli. 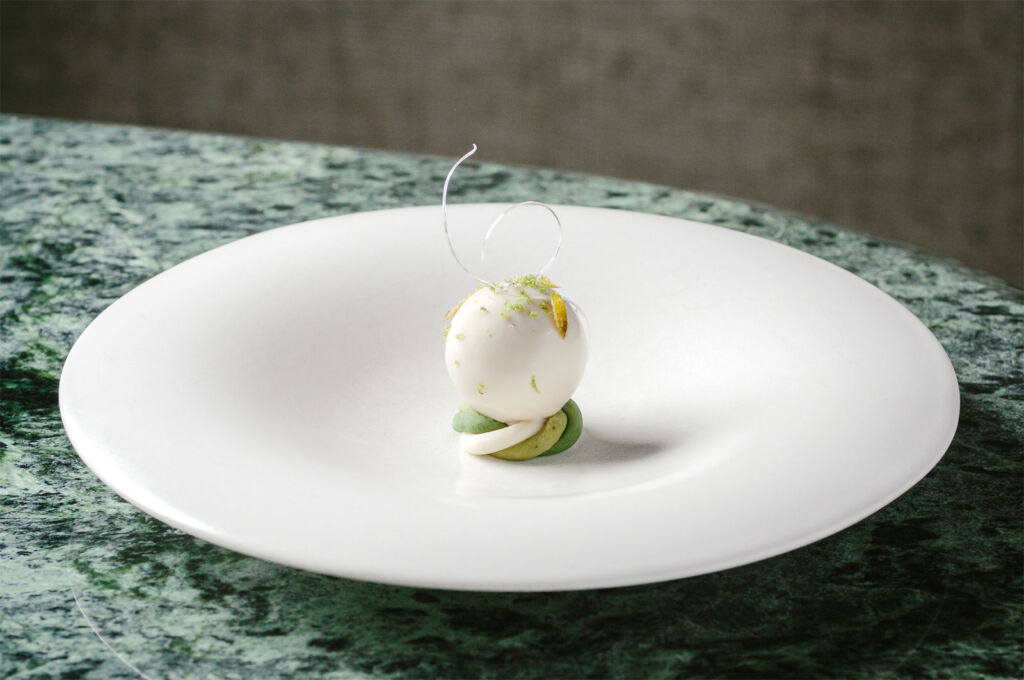 Mi Domingo Favorito (My favourite Sundays) – The ability to engage all five senses from sight to touch. This season, Andō presents a pleasant presentation of garrapiñada, maple syrup, caramelized pecans nuts. The dessert combines the Japanese technique of wagashi and his childhood memory of garrapiñada.

Sustainability Drive at Andō
Working together with Zero Foodprint Asia, Chef Agustin accentuates the finest produce by boutique purveyors, local farmers and producers who share his fervent respect for seasonality and heritage. In a bid to minimize carbon footprint and to support the local community, seasonal ingredients are sourced from Hong Kong where possible.

With the increasing reality of overfishing and the looming risk of tuna going commercially extinct, Andō has also removed all forms of tuna from the menu. Additionally, Andō has installed Nordaq’s sustainable water filtration system throughout the restaurant, which purifies water on-site without the need to ship, move and store heavy bottles. 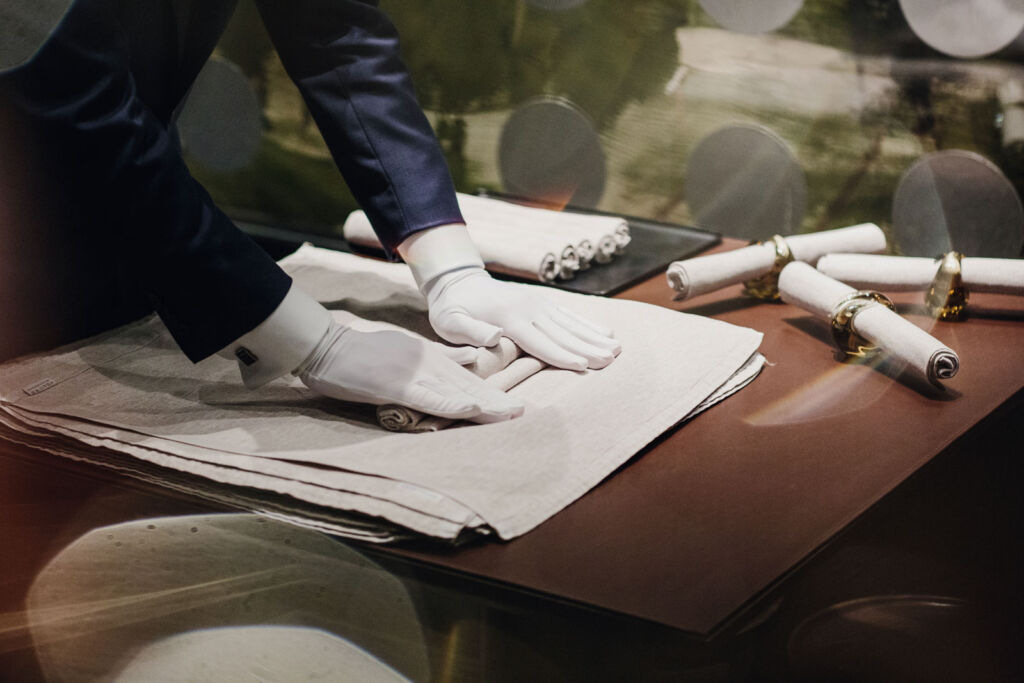 Andō adopts a uniquely interactive dining format, encouraging guests to trust the chef to guide them through seasonal dishes of his choosing without the usually printed menus on the table to reduce paper printing and consumption.