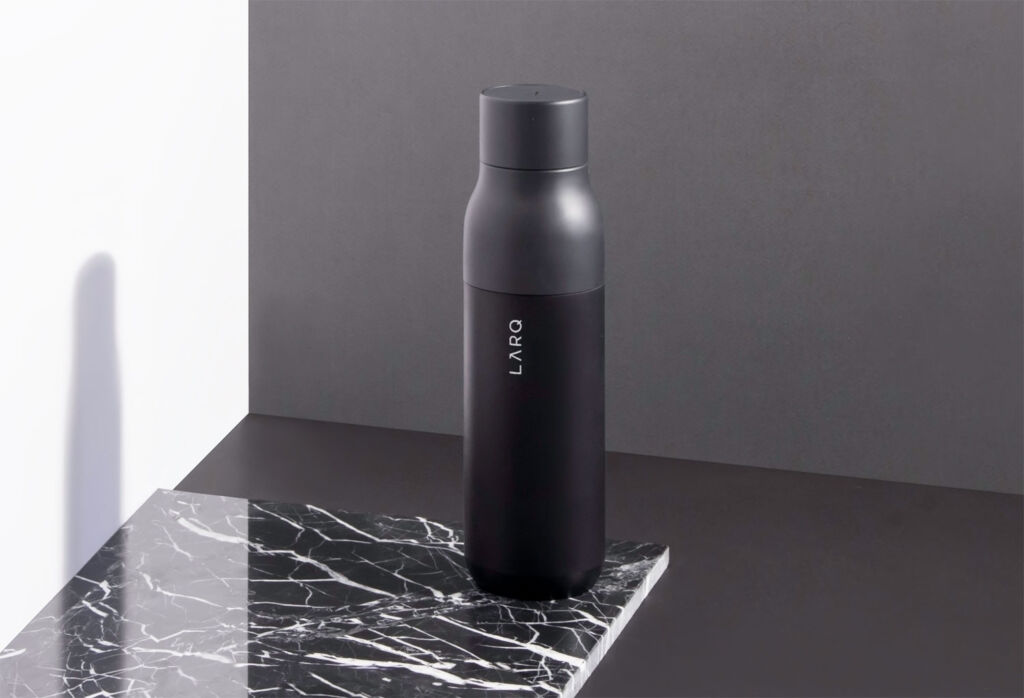 In this day and age, germs, bacteria and all sorts of nasties are at the forefront of people’s thoughts. The LARQ Bottle is designed to provide peace of mind as it has its own in-built technology that eliminates all the contaminants and impurities inside the bottle automatically.

This year has been a wake-up call for all of us. There’s a nasty virus out there, too small to see with our eyes and you don’t know where it is lurking. We know it’s a stretch to write this, but If there was something positive to come from it, its that people are far more aware when it comes to staying healthy.

This year has seen more and more manufacturers creating products with health and safety in mind, and one of the leaders in the field is leading health and wellness hydration brand, LARQ.

LARQ’s desire to bring fresh cleaning water to the world is making waves throughout the business community. So much so, they recently announced $10 million in Series A funding which will help them to continue expanding in 2021 and lowering dependency on single-use plastics. In addition to this, they also picked up the coveted ‘Best of the Best’ reddot award in 2019 for their innovative bottle. 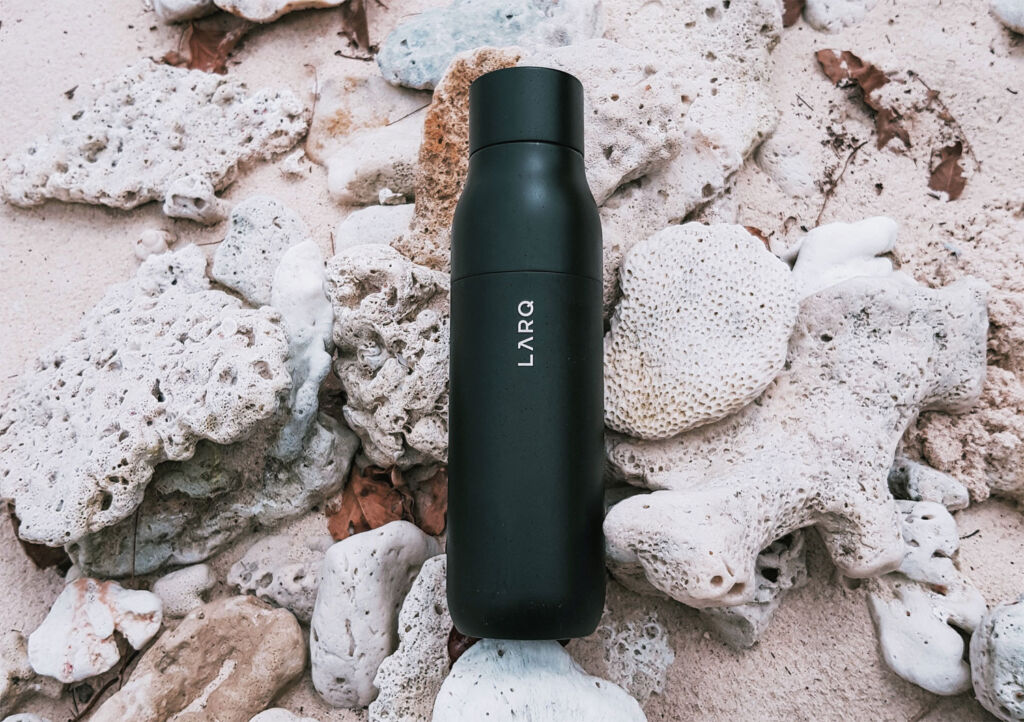 Although the company is relatively new, in 2019 they sold more than 75,000 units and are expecting to double the business by the end of 2020. We have no doubt they’ll achieve this as their products are now stocked by 88 retailers including Bloomingdale’s, Nordstrom and Net-a-Porter.

We’ve been so impressed by what LARQ has achieved in its young life; we couldn’t resist taking the opportunity to review one of their self-cleaning bottles.

What is the LARQ Bottle?
In simple terms, the LARQ Bottle is a bottle that cleans itself. Yes, you did read that correctly, it is a self-cleaning water bottle and purification system that eliminates 99.9999% of bio-contaminants from the water and bottle itself. It is said to be able to kill harmful and odour-causing germs, ensuring you have fresh water whenever you need it.

How does it eradicate contaminants and impurities?
The LARQ Bottle has PureVis™ UV-C LED technology built into it which was in development for more than a decade. The purifications system automatically engages every two hours bathing the liquid in light, ridding the water of impurities. The technology can also be manually operated, and with a touch of a button, you can have pure drinking water in under 60 seconds. The patented UV-C light emitted inside the bottle is specifically designed to break down the DNA of biological contaminants. 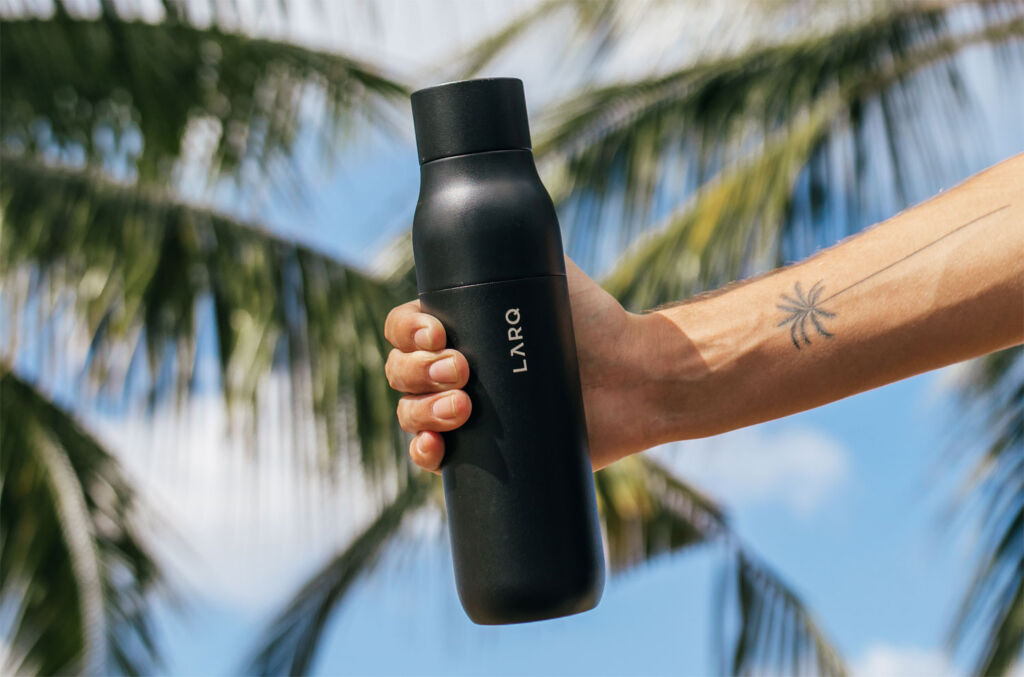 Using the LARQ Bottle
Make no bones about it, the LARQ Bottle is a premium product and sits head and shoulders above any other water bottle we’ve experienced. In our household, we have probably ten different types of water bottles and consider them an essential item to take on any car journey.

The bottle we received was the matt black version and to the touch feels very high quality. It is a little heavier than the other bottles we have, but this is, of course, due to them not having any cutting-edge technology inside them. The bottle comes in a quality box with instruction booklets and leads for charging. 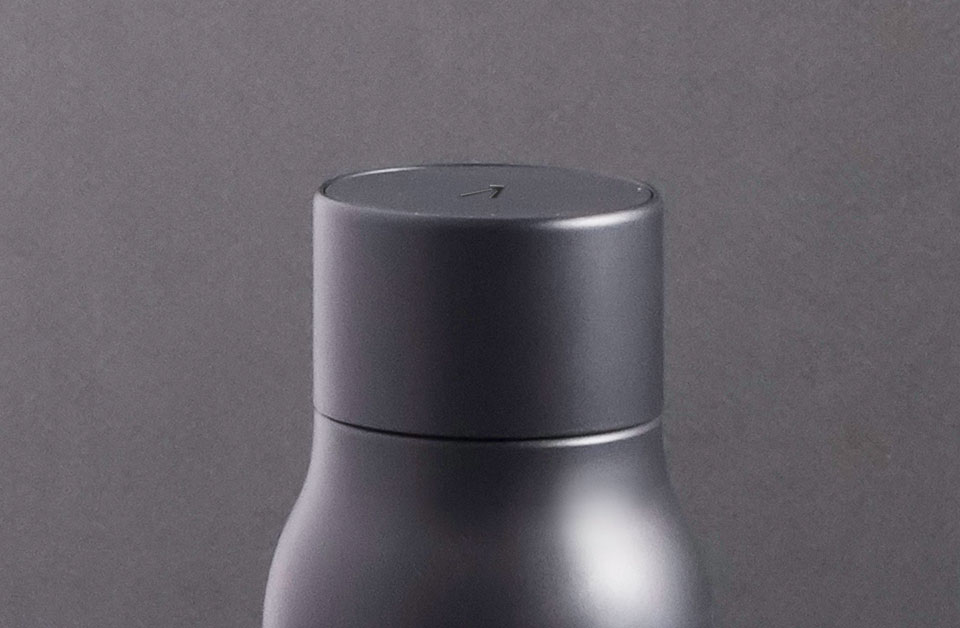 The lid of the bottle is where you press to turn on the water filtration manually. Once engaged, the lid produces a pulsing blue ring to let you know the contents are being purified. On the side of the lid is the USB socket for charging. The brand states that the bottle will last between 1-2 months on a single charge which is frankly mindblowing.

The LARQ Bottle is double insulated keeping drinks cold for up to 24 hours. It is available in two sizes, 740ml and 500ml, it was the 500 ml version we were trying. After two days of use, I found myself opening the bottle and taking a sniff, hoping to get the whiff of something nasty, I found nothing which is precisely what I hoped for. We’re still waiting to hear how effective the water purification system is. For example, if you could take one while hiking and then filter fresh water from a stream, it would be astonishing.

Thus far, we’ve only tried it with common or garden tap water, but according to representatives of the brand, any water can pretty much be purified. This raises the bottle to a completely new level. Imagine feeling thirsty while you’re out and about; you could head to the nearest freshwater stream, fill it up, press the purifying button and drink away – simply amazing!

The only minor issue we had with the LARQ Bottle relates to its height. The manufacturer states the bottle can keep liquids hot for up to 12 hours which is fantastic. Our preferred method to make a hot drink is to pop a herbal tea bag in followed by some hot water. As expected, this part of the process is simple. It’s not as straightforward when it comes to taking the teabag out.

The bottle, as we mentioned previously, is taller than most other models due to the technology packed into the lid. It also has a smaller neck opening than the others we have. Even with the largest long-handled teaspoon, we found it difficult to reach the teabag at the bottom. My husband had to use a good deal of patience, coupled with some luck and a touch of swearing before he eventually spooned it out! 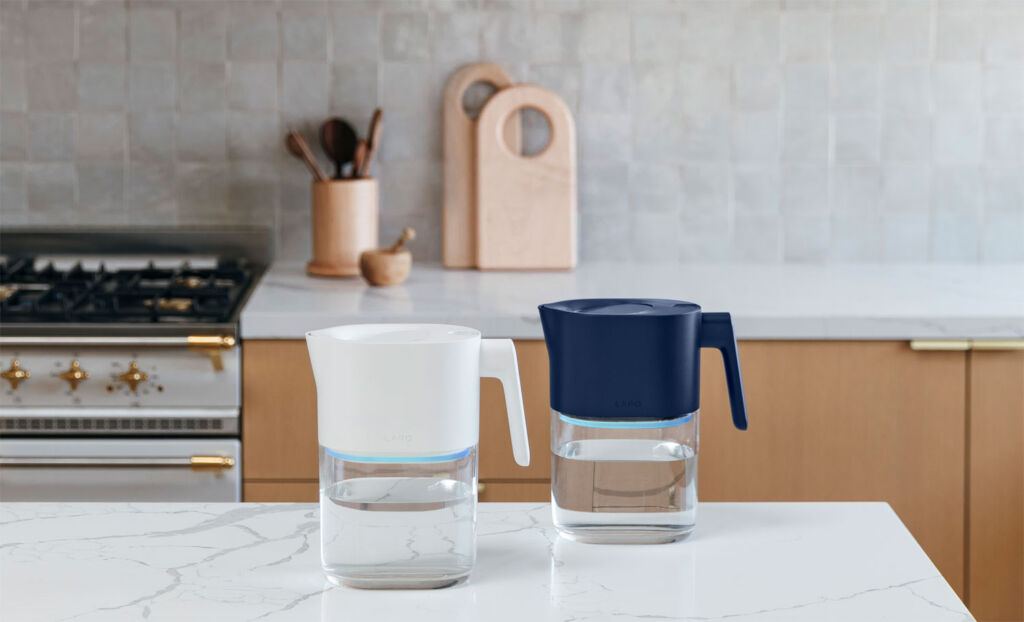 The LARQ Pitcher
While compiling this piece, we received news that LARQ has added to its portfolio of products with the unveiling of the LARQ Pitcher. This too has the Proprietary PureVis™ UV-C LED technology found in the LARQ Bottle along with a unique two-stage filtration and purification process that removes >90% of lead, chlorine, mercury, cadmium, copper, zinc, VOCs, Radon, and more through its Advanced filter. 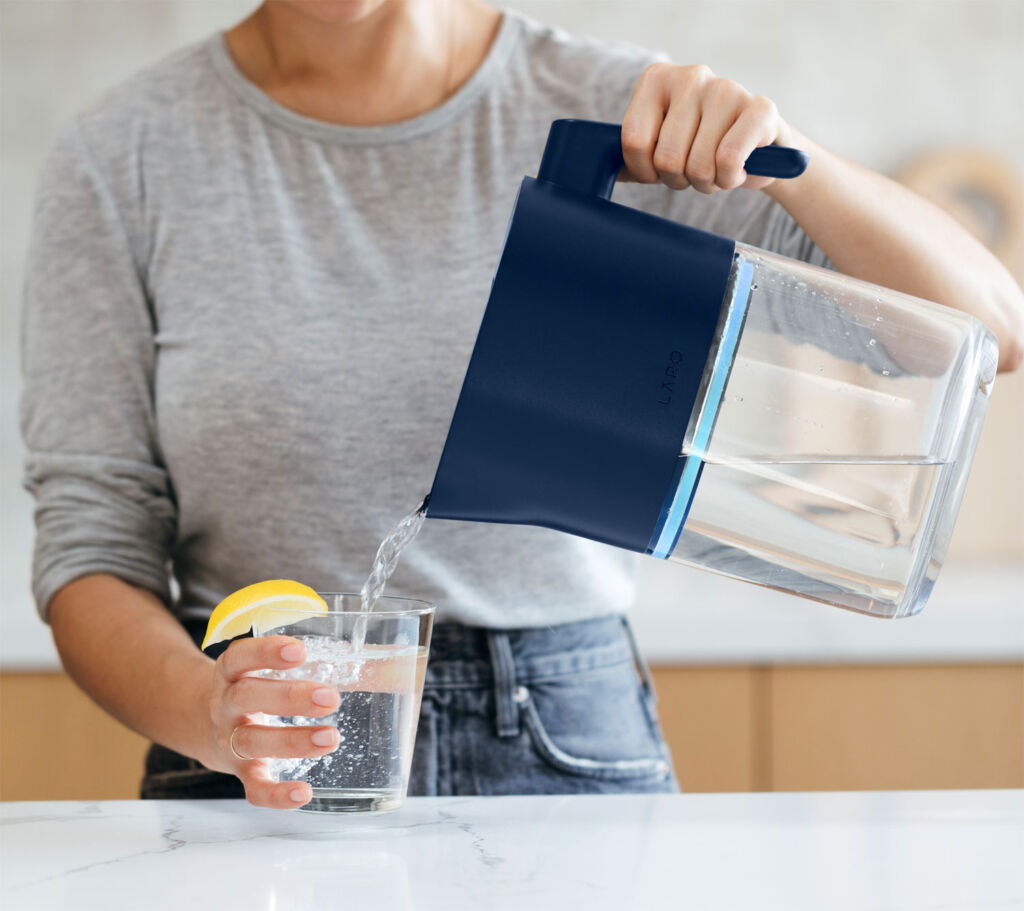 The LARQ Pitcher has two filter options, essential and advanced and each is capable of purifying 60 gallons of water which is a third more than a conventional filter can. It also has built-in intelligent filter tracking, which measures water usage and reminds you when it is time to replace the filter.

LARQ’s desire to not only bring fresh drinking water to the world but to also be a driving force in eliminating plastic bottles is vital to the planet’s future. To highlight this, in the time it took you to read the previous sentence, more than 500,000 plastic bottles were added to landfill sites.

It might also surprise you to know that in the US, more than 27 million people are exposed to contaminated drinking water. Freshwater is vital to all of us, and the LARQ Bottle is a very simple way to ensure you can have it. 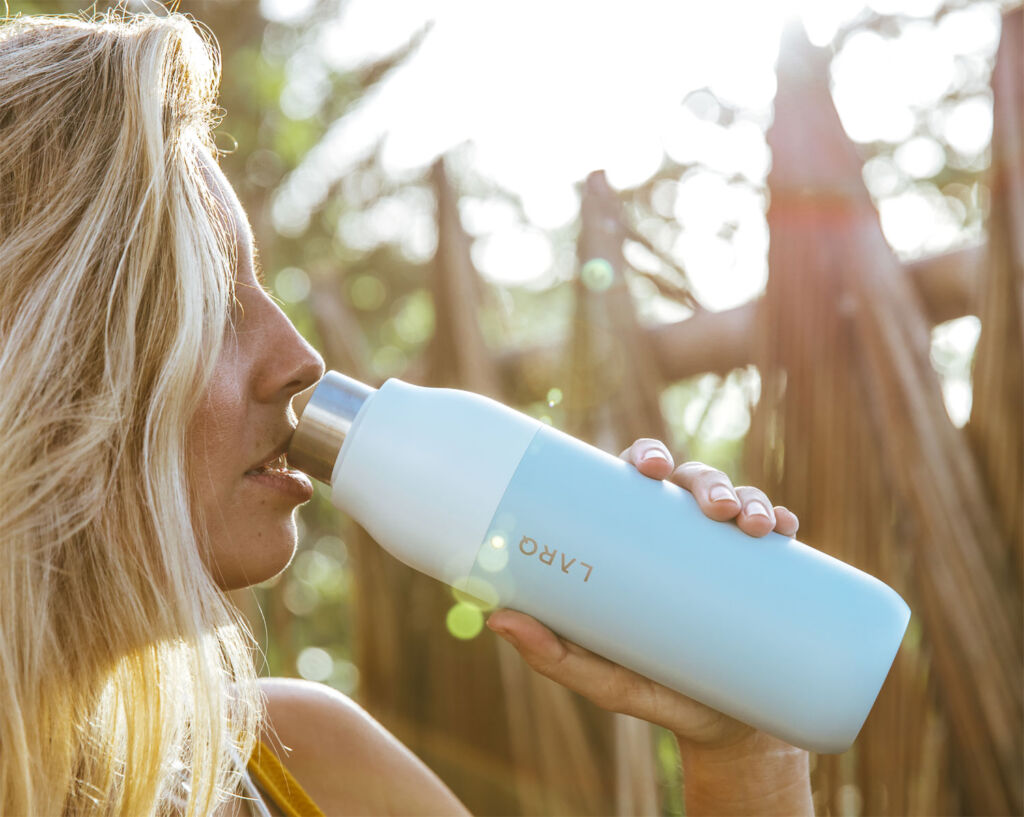 For more information on the LARQ Bottle and Pitcher and to buy online, visit www.livelarq.com.