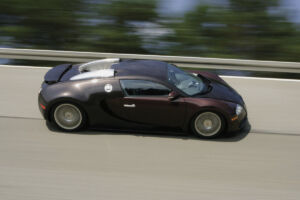 Attending the launch are senior executives from Bugatti Automobiles S.A.S and Bugatti China, affirming the company’s confidence in the future of China’s ultra-luxury sports car market. The Bugatti Veyron 16.4 Grand Sport is the latest version of the already-legendary Veyron model series. With a formidable 16 cylinder engine operating alongside four turbo-chargers, the Grand Sport can achieve a power output of 1,001-horsepower.

Four turbochargers and four valves per cylinder, 1,250 Nm at 2,200 rpm and permanent 4-wheel drive for a top speed in excess of 400 km/h (250 mph) with its roof in place. Because of this impressive power unit, the Grand Sport boasts an acceleration rate of 0-100 Km/h (0-62mph) in less than 2.7 seconds: greater than that of any production car in the world. It decelerates from 100 km/h to 0 in 2.3 seconds. Full braking from 407 km/h brings the Bugatti Veyron 16.4 to a halt in less than 10 seconds. It consists of a high-performance brake unit generating up to 180 bar brake pressure with ceramic discs and 8-cylinder monoblock brake calipers.
The resilient and weight-efficient body design of the Grand Sport marks a milestone in the history of automobile safety technology. With its exterior shell consisting of a carbon fibre monocoque suspended from an aluminium frame at the front of the chassis and carbon fibre/stainless steel frame at the rear, the open top version of the renowned Veyron coupe can justifiably claim best-ever crash performance for super-sports cars of its class. Complete driver and passenger cockpit protection is also enhanced by the strengthened carbon design of the A frame and doors. A seven speed double-clutch gearbox and carbon-ceramic brake discs ensure optimum performance in conjunction with the maneuverability and flexibility provided by the innovative Bugatti Electronic Stability Program (ESP). Interior features include accessible gear-change paddles on the steering wheel, Puccini audio system (designed especially for the demands of driving a convertible) and quilted leather upholstery for an elegant and classically sporty interior. Design features such as a new swept-back windshield and refashioned running lights minimize turbulence while improving visibility to further distinguish the Grand Sport from the original Bugatti Veyron 16.4. purpose in mind to cement the luxurious and noble image of the brand for all those in China that appreciate the spirit of Bugatti: ‘Art – Forme – Technology’.

Selecting Auto China 2010 as the venue for the landmark launch of the Bugatti Veyron 16.4 Grand Sport in the Asia Pacific region is the latest step in the continuing success of Bugatti China. Since the March 2008 agreement between Bugatti Automobiles S.A.S and Bentley China – a subsidiary of the Dah Chong Hong Group- authorizing it as the exclusive distributor of Bugatti in China, the brand has enjoyed continuous and steady growth. Widespread economic development, coupled with increasing appreciation for finely crafted, luxury sports cars among premium consumers has made China to a strategically highly important market for Bugatti worldwide. The Grand Sport arrives at Auto China 2010 at the tail-end of two successful years for Bugatti in the Chinese market. A first appearance at Beijing International Auto Show in 2008 made headlines worldwide, as an eager sports car enthusiast became China’s first owner of a Bugatti Veyron 16.4 less than two hours after the model’s Asia Premiere. Other Bugatti masterpieces have also found an appreciative audience in China, with the successful launch of such beautiful and innovative models as the Bugatti Veyron 16.4. Centenaire Edition car “Malcolm Campbell” and Bugatti Veyron 16.4 Fbg Par Hermès: the product of a collaboration with classic French luxury fashion house Hermès of Paris. Following these events, the 2009 opening of the world’s first Bugatti showroom in Beijing provided a platform for Bugatti to establish its reputation for excellence in the Chinese market. Furthermore, with highly-exclusive customer relations events such as the VIP Shanghai Test Drive, Bugatti truly distinguished itself as the luxury sports car for drivers of refined and sophisticated tastes.

Reflecting on the projected future development of Bugatti in China, Mr. Kingston Chang, Business Director of Bugatti China said, “We believe the operations systems that Bugatti China has in place will bring new levels of efficiency and synergy to the relationship between our sales and after-sales service teams. Also, by making use of Bentley China’s excellent distribution network and state-of-the-art after-sales service centre in Shanghai, we will be able to offer Bugatti owners in China the ultimate in personalized service and customer care.”

With China’s ultra-luxury car market set to reach new heights in 2010, Auto China 2010 and the launch of the Grand Sport demonstrate the commitment of Bugatti to its devotees in China. Following the exhibition in Beijing, the Bugatti Veyron 16.4 Grand Sport will tour the country, appearing in Shanghai and other major cities. In the future, Bugatti will continue to bring the best in ultra-luxury sports cars to China, and offer even more opportunities for lovers of the world’s most sophisticated sports cars to sample the driving experience of a lifetime. After celebrating a remarkable 100 year history last year, Bugatti continues with the purpose in mind to cement the luxurious and noble image of the brand for all those in China that appreciate the spirit of Bugatti: ‘Art – Forme – Technology’.