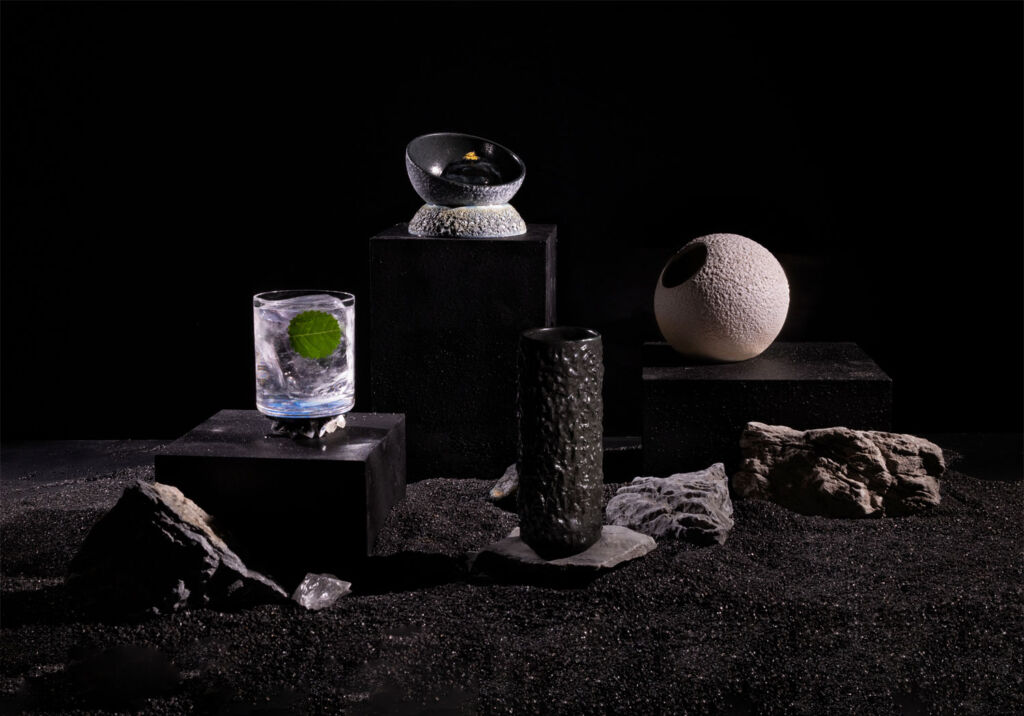 DarkSide at Rosewood Hong Kong, the sophisticated, sultry jazz and cocktail parlour has introduced a groundbreaking new cocktail menu that has been inspired by the eight phases of the moon and their mystical powers.

As part of its commitment to local innovation, DarkSide has partnered with Australian ceramic artist Ryan Foote of R L Foote Design Studio and Polish abstract resin artist Magdalena Klim who have designed unique vessels for each cocktail and its representative moon phase.

Adding to the deliciously ethereal experience, guests will bear witness to the first cocktail menu presented via a high-tech hologram video. The video also includes an interactive segment that gives indecisive guests the chance to shake a Moon Magic Ball to reveal a moon phase, suggesting which moon cocktail is “meant” for them. 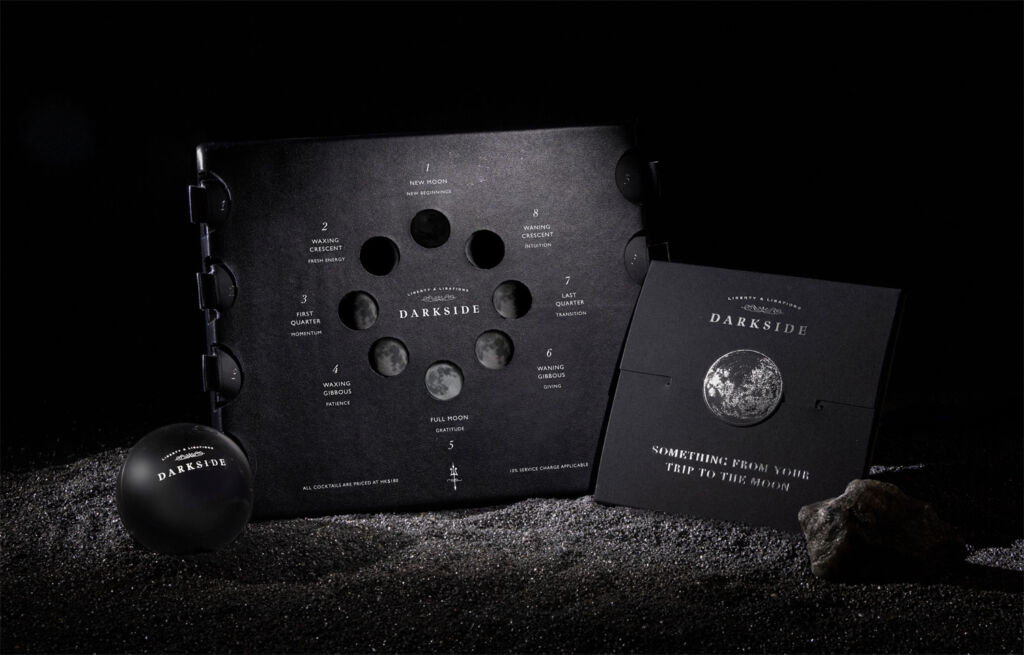 The Moon Menu – Cocktails Inspired by the Eight Phases of the Moon
According to astrology, yoga practice, and ancient philosophies, the moon’s different phases influence human emotions and behaviour during each lunar cycle. This belief inspires DarkSide’s new menu.

Each cocktail corresponds to a different moon phase, and its brightness or darkness determines its intensity. As the moon becomes brighter, the drink becomes lighter, and likewise, as the moon gets darker, the drink gets stronger. 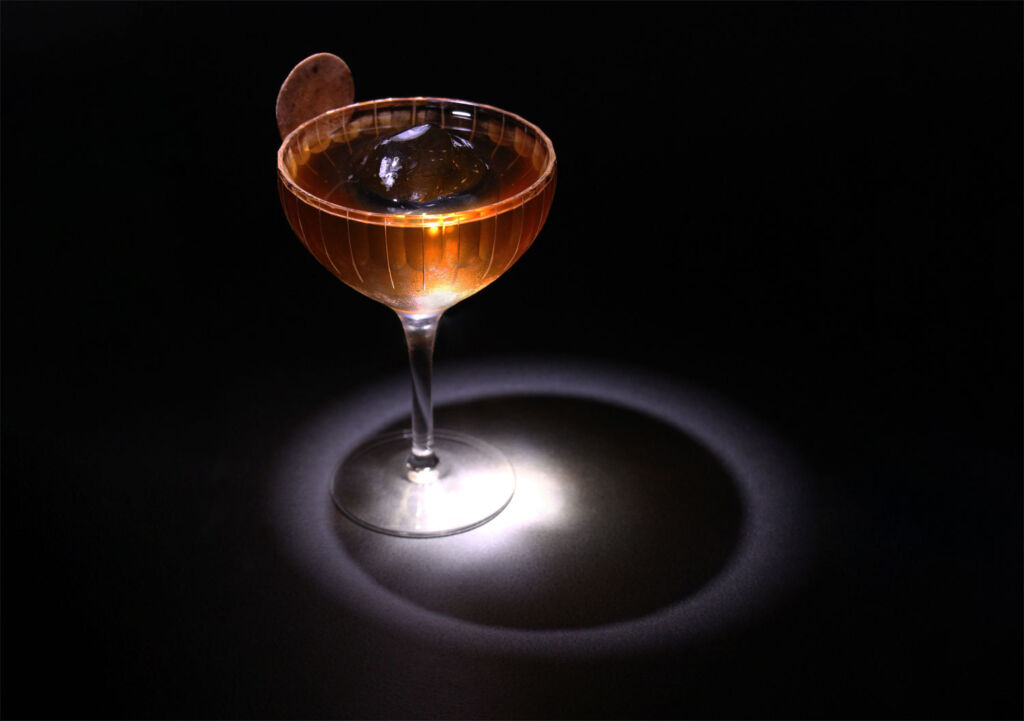 “NEW MOON – New Beginning”
The first phase of the moon cycle is New Moon, invisible to those on earth. It is believed to be a time for new beginnings and a time for setting one’s intentions for the month ahead. The corresponding cocktail is a stirred drink with a base of Johnnie Walker Black Label and Fernet Hunter, with aromatic notes provided by Japanese hinoki wood.

The blend is approachable yet complex on the palate with the addition of Cantine Intorica Banana Aromatic Marsala Wine served in an elegant Coupette glass with a single ice ball. 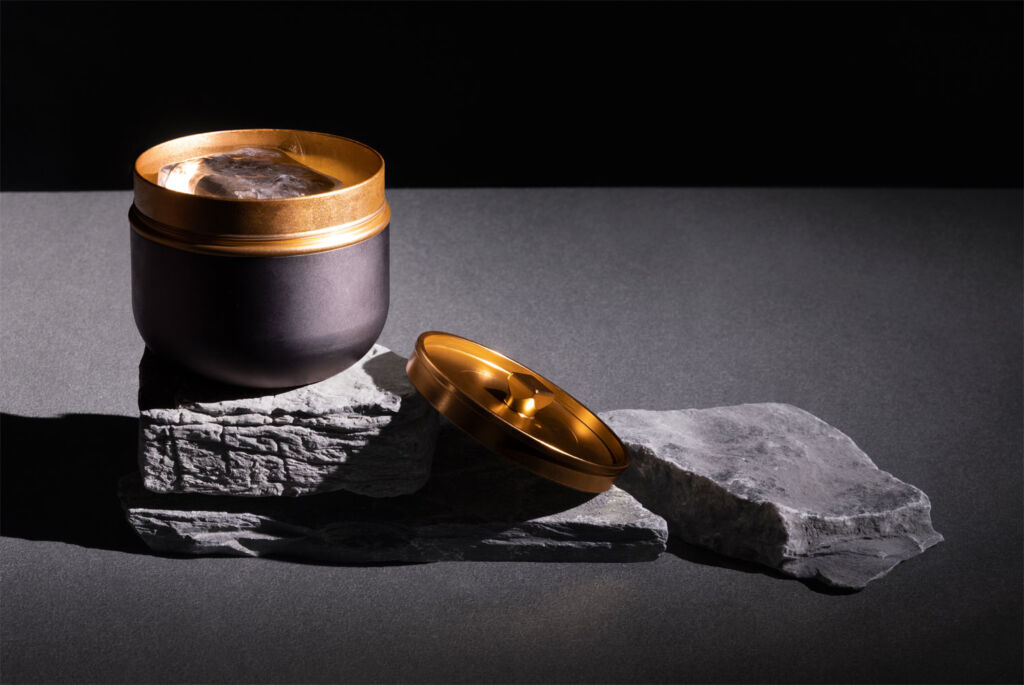 “WAXING CRESCENT – Fresh Energy”
The Waxing Crescent phase is the moon’s first step towards fullness, consistent with a build-up of personal energy. The matching stirred cocktail is based loosely on an Old Fashioned with a Remy Martin VSOP cognac base. The nuttiness from tonka beans interacts with the complexity of Graham’s Fine Ruby Port wine and Bourgoin Pineau des Charentes. The aromatic cocktail comes in a teacup with a block of ice and spritzes of myrrh mist. 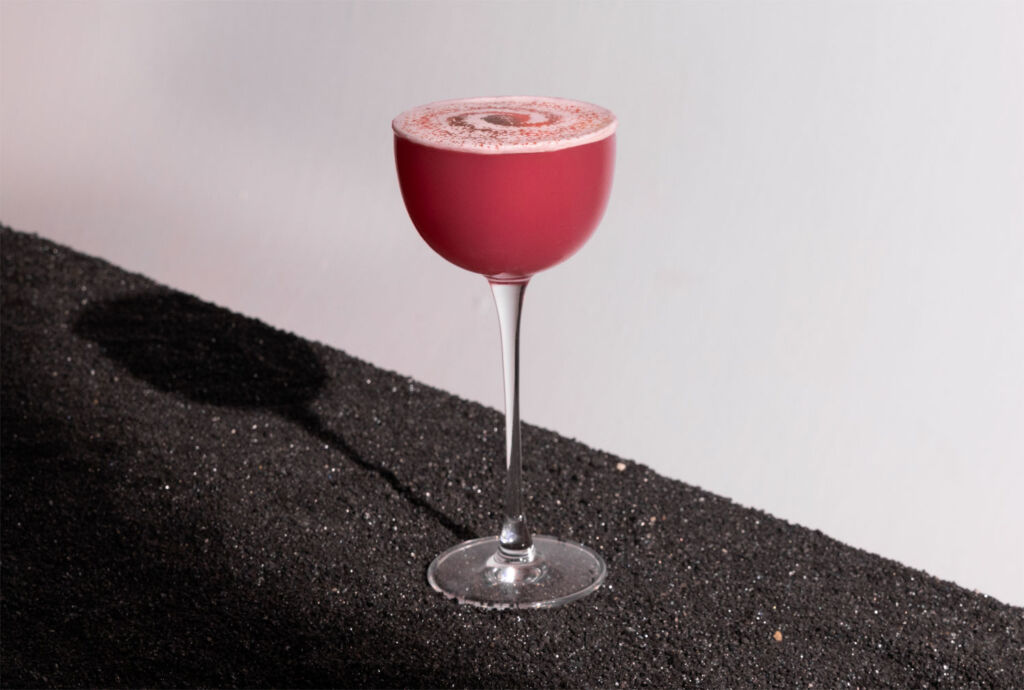 The First Quarter – Momentum
The First Quarter is the phase where the entire right side of the moon becomes illuminated. It is said to be the perfect time for people to revel in what they’ve been working on. “Momentum” is a shaken drink with fruity notes and hints of acidity from raspberries and herbal notes provided by fig leaves and distilled whisky. The drink is served in a pony glass and garnished with rice paper. 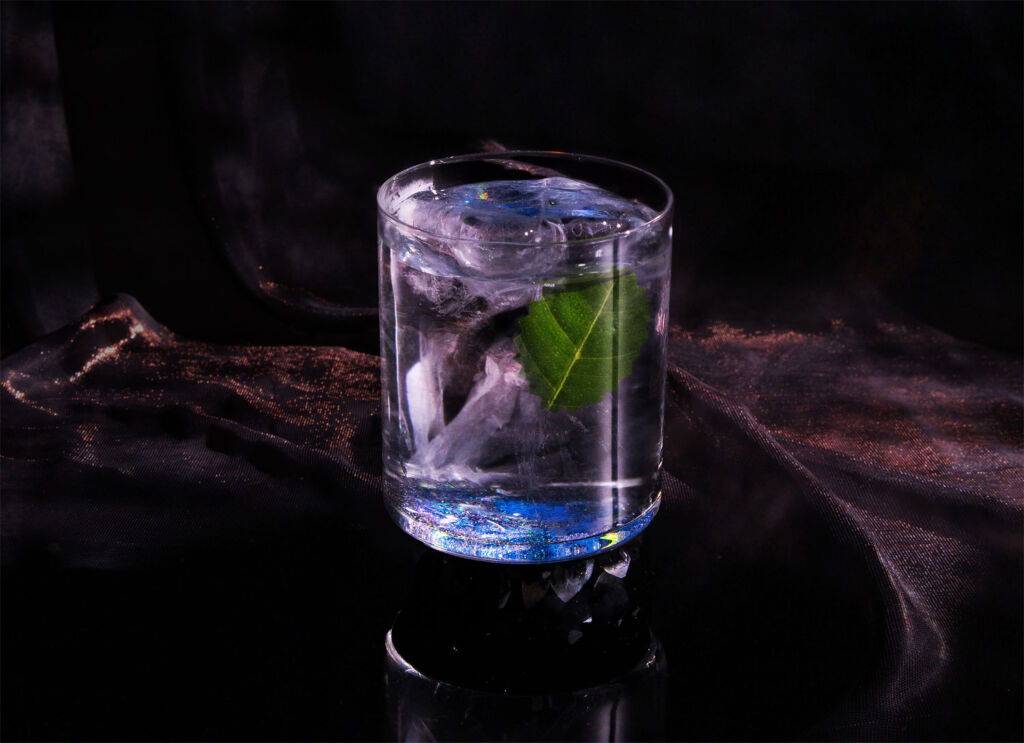 The Waxing Gibbous – Patience
The Waxing Gibbous phase follows the First Quarter, just one small step away from the moon’s full power. It is said to be a time to persevere and be patient. The corresponding cocktail is a refreshing and tropical stirred Grey Goose vodka and Tio Pepe sherry libation, with exotic notes from coconut and pandan vinegar, balanced with sweet and fruity lychee.

Taro provides a soft undertone of flavour, while a drop of sandalwood creates a complex aroma. The drink is garnished with a single pandan leaf, and served in a rocks glass over a block of ice that symbolises the Milky Way galaxy. 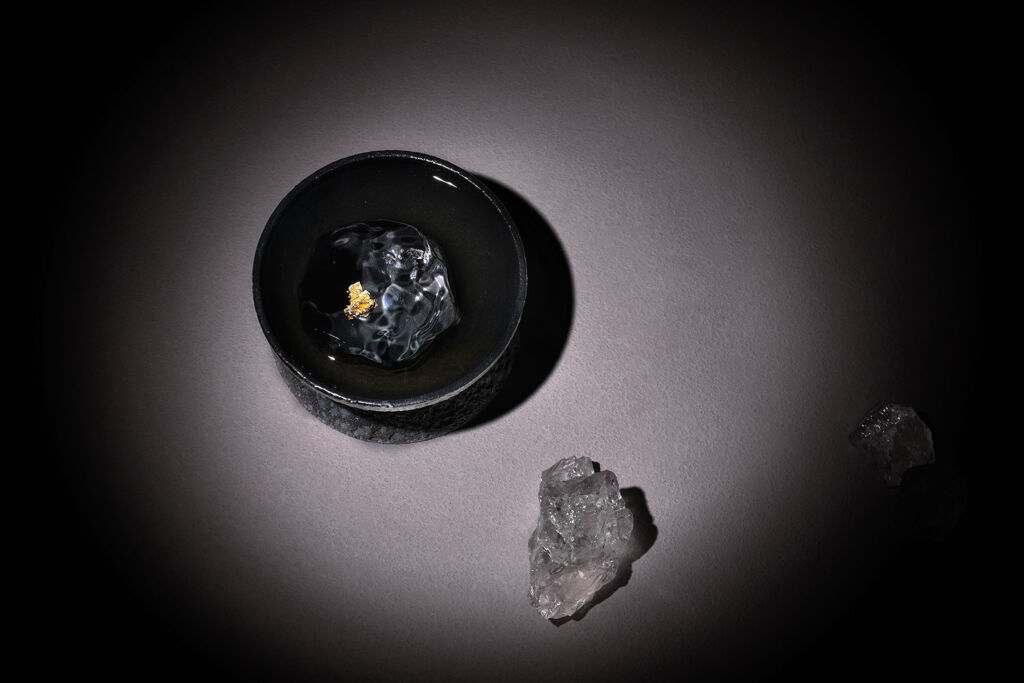 Full Moon – Gratitude
During the Full Moon, the orb is at full power; this is an occasion to be grateful and add extra strength to intentions. “Gratitude” has a base of Star of Bombay gin with a clarified milk punch and a touch of nuttiness and acidity from sour cherry wine. The drink is served in a ceramic cup designed by Ryan Foote to symbolise the rough and ridged texture of the moon’s surface. 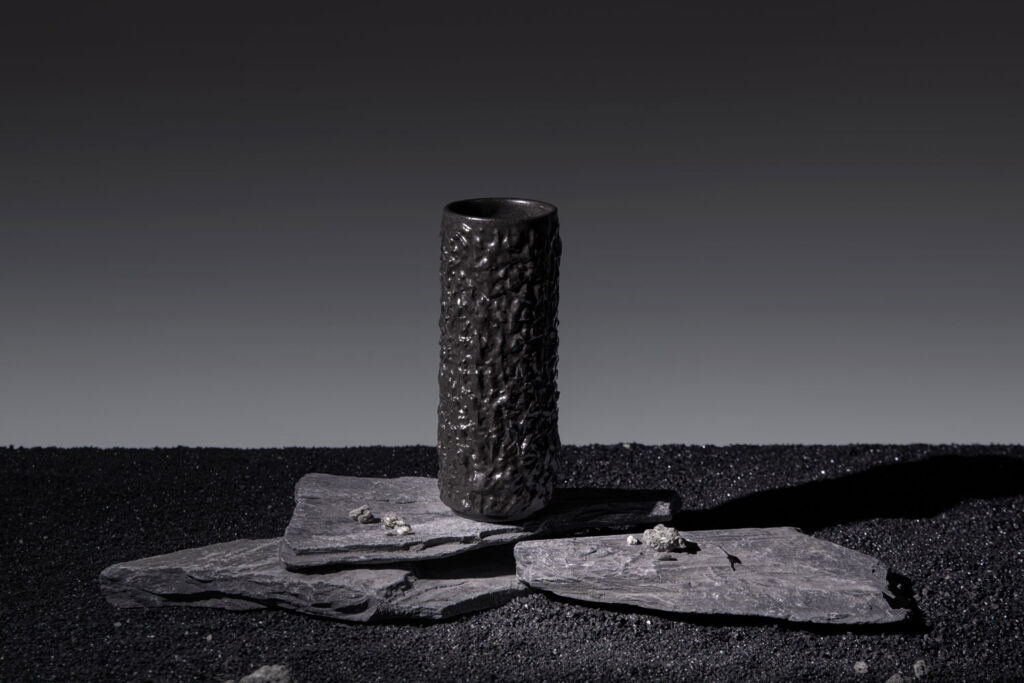 Waning Gibbous – Giving
Waning Gibbous marks the winding down of the moon’s power, with a shadow on the right-hand side of the sphere. The related cocktail is a fizzy and refreshing take on a whisky highball. Created with Michter’s Bourbon and Mancino Bianco Vermouth, the cocktail exudes delicate herbal notes from Rosewood’s signature blend tea of passionfruit and cherry blossom, with a hint of acidity from strawberry gum. The drink is served in a ceramic rock-textured highball mug whose design was inspired by the form of a meteorite. 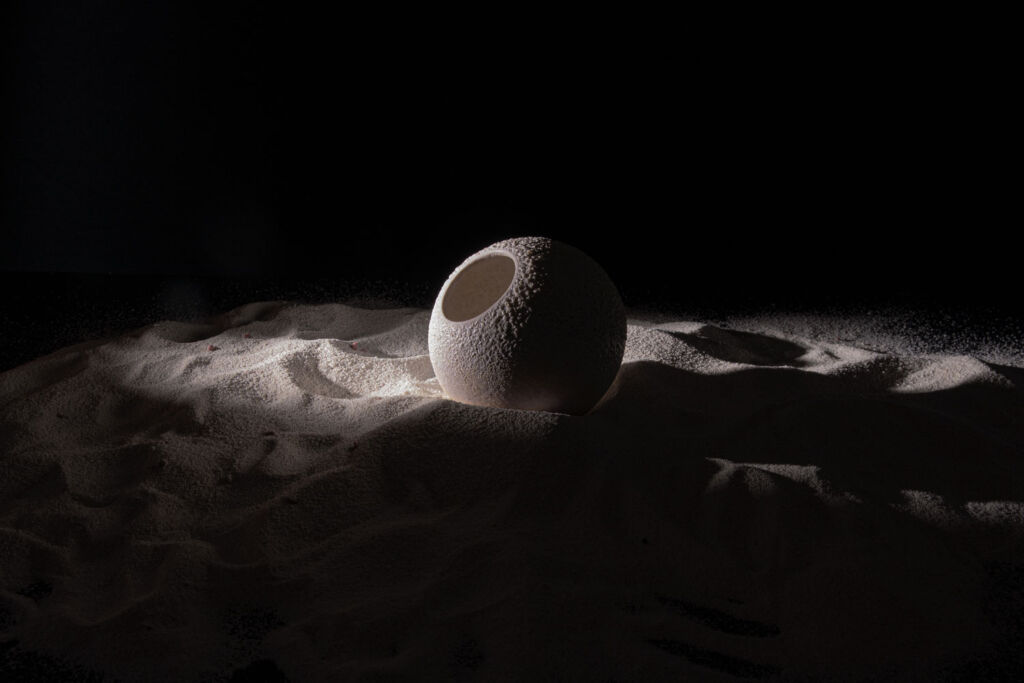 Last Quarter – Transition
The third-quarter moon, or the Last Quarter, is illuminated on the left-hand side. The moon is now back to half-power, and this is supposedly the ideal period to let go of any negativity. The complementary “Transition” is a creamy shaken cocktail with ruby chocolate cordial. Aromatic and floral notes are derived from the shea butter calvados, and a touch of London Essence soda water opens up the complex flavours. The drink is served over ice in a ceramic textured moon cup with a straw. 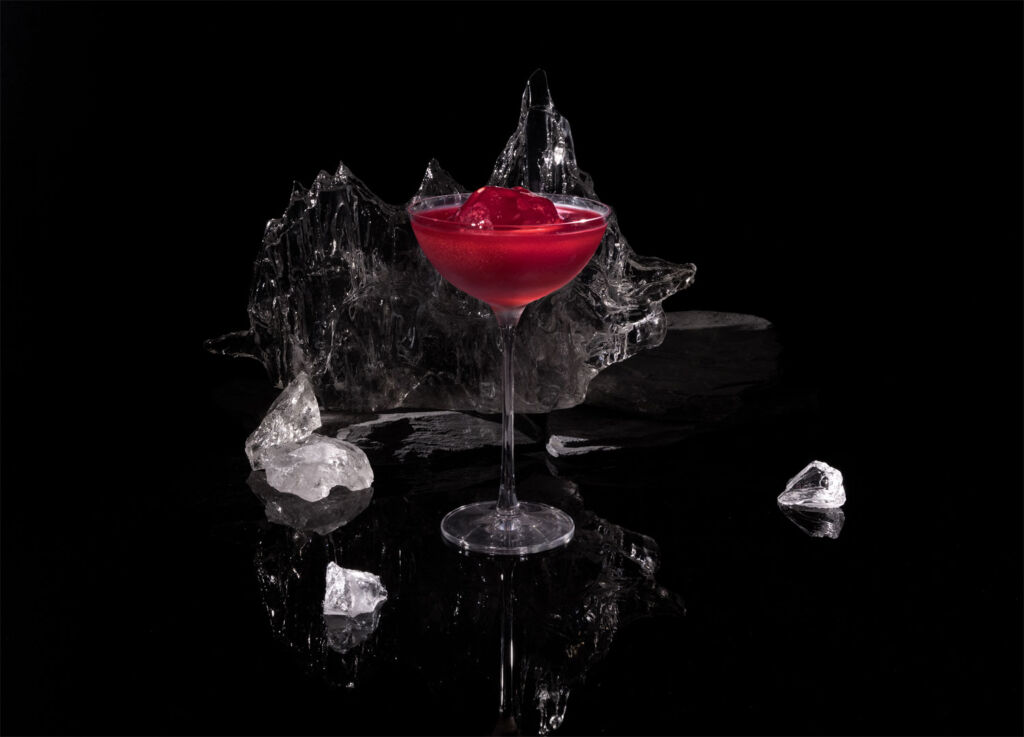 Waning Crescent – Intuition
The power of the moon is nearly at its end, with just a small left-hand crescent visible in the sky, known as Waning Crescent. The cocktail that is linked is a stirred drink, earthy and herbaceous from beetroot and Pipiroka with just a hint of acidity from the vinegar.

Gentle coffee notes from Mr Black coffee liqueur blend with the aroma of coffee water spray added on top of the cocktail that is served in a Coupette glass with an ice ball. The presentation of the cocktail is in deep red colour with gold and silver edible glitter garnish that reflects the galaxy’s mesmerising sparkle.

The Moon Menu Artists
Australian artist Ryan Foote, whose design studio in Melbourne is focused on delivering unique and contemporary ceramic tableware and drinkware, teamed up with DarkSide to create a series of porcelain vessels that convey the dark side of the moon while also tantalising the visual, tactile and taste sensations of the cocktails. He fashioned three special cups for The Moon Menu experience — one inspired by moon craters, one by the actual moon and one by the universe’s meteorites.

Polish Resin artist Magdalena was tasked with the enormous challenge of creating the illusion of an entire galaxy within each drinking glass. Her work fuses art, nature and the science of chemistry to create multi-dimensional art pieces. For DarkSide’s Moon Menu, Magdalena created a milky way effect in each glass by layering resin with sparkling glitters, mysterious ghost pigments and handmade crystals. The brilliant combination of mixed media in each glass adds a new and as yet unseen dimension to the cocktail-drinking experience.

The Moon Menu will be exclusively available at DarkSide at Rosewood Hong Kong from 12 July, with all cocktails from the menu priced at HKD180 plus a 10% service charge. 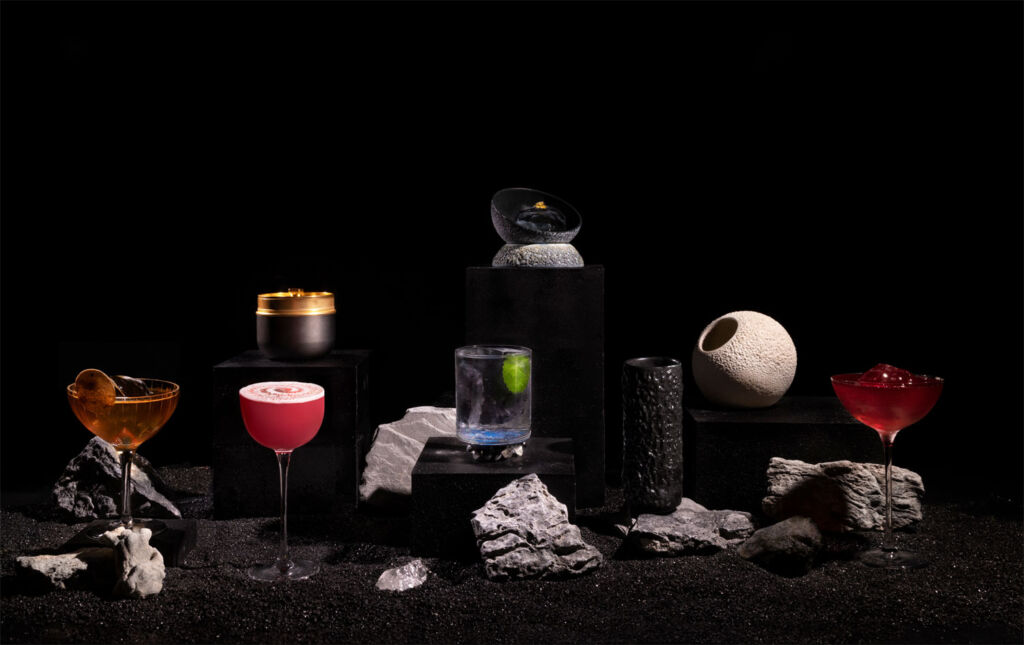 Read about other great places to socialise in Hong Kong in our dining section here.