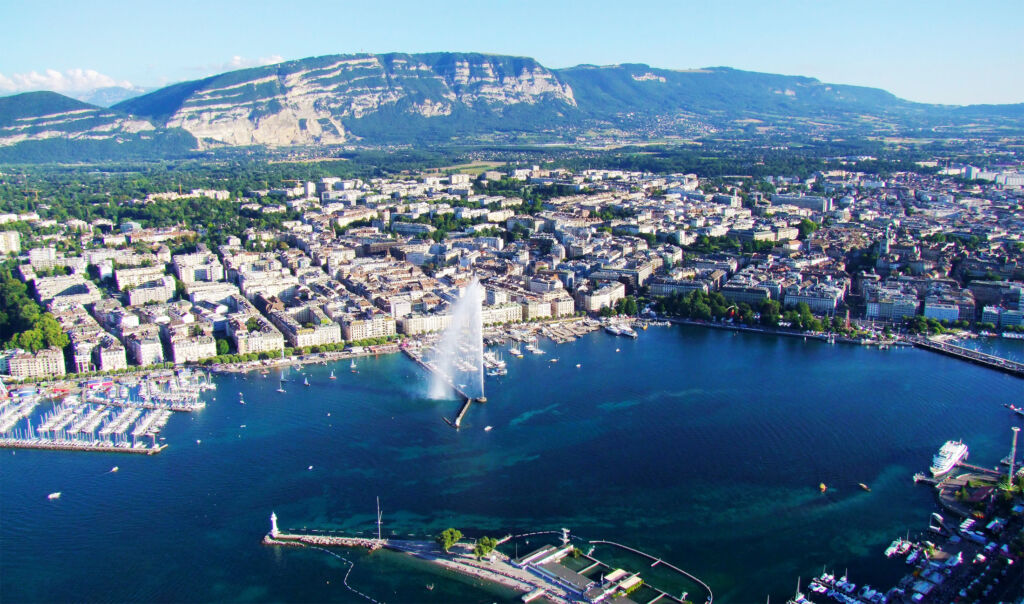 When you think of a city break, Geneva probably doesn’t rank at the top of your list. The city is often seen as just the gateway to the alps, but the next time you’re heading there, stop, stay and explore, which is what Sabi Phagura did when she flew to the Swiss destination.

Hands up, I am guilty of bypassing Geneva on numerous trips to Switzerland. I’ve always been in a rush to get ‘somewhere else’ when flying into the city’s airport, but when I was invited to explore Geneva itself, I thought it was high time I gave this city, nestled between mountains and lakes, my full attention to see what I have been missing out on all these years.

Geneva is Switzerland’s most international city as it is where the European seat of the UNO is based and is home to the International Red Cross, from where it directs its humanitarian campaigns. Around 40 per cent of the inhabitants don’t hail from here and are a mixing pot of nationalities who came to the city for one reason and never left. 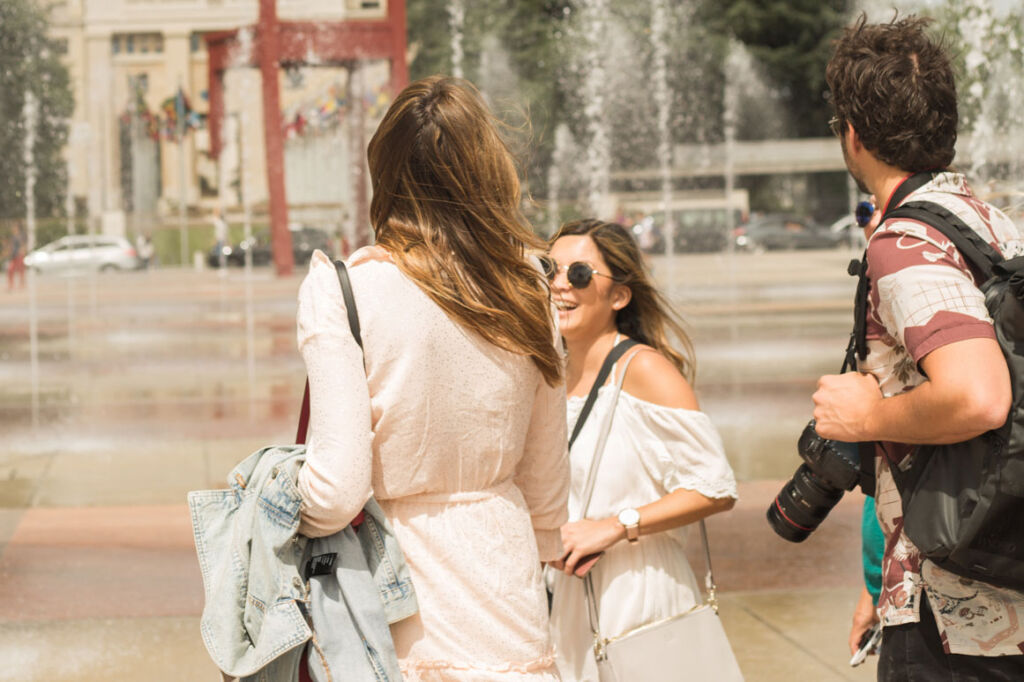 Perhaps it has something to do with the fact that there are a plethora of things to do and see here when you start to scratch deeper beneath the surface. And it’s this that makes Geneva more of a resort than a city. Let’s take a look.

Two of the instantly notable things, as you enter the city are the glorious views of Lac Léman (Lake Geneva)) and the mountains as far as the eye can see. On a clear day, Mont Blanc, the most famous of them all, can be seen in its full glory on the horizon. Again, if the weather is good and the wind favourable, the sky is punctuated with Jet d’eau – an eye-catching fountain with a 140-metre-high water jet at the periphery of Lake Geneva.

Another thing to look out for with your gaze held firmly above eye level is St Peter’s Cathedral. It’s a real historical treasure situated within the old town’s cobbled streets. The effort to climb the 157 steps to the top of the towers will be well worth it, with 360 degrees of panoramic views of the city and the lake. 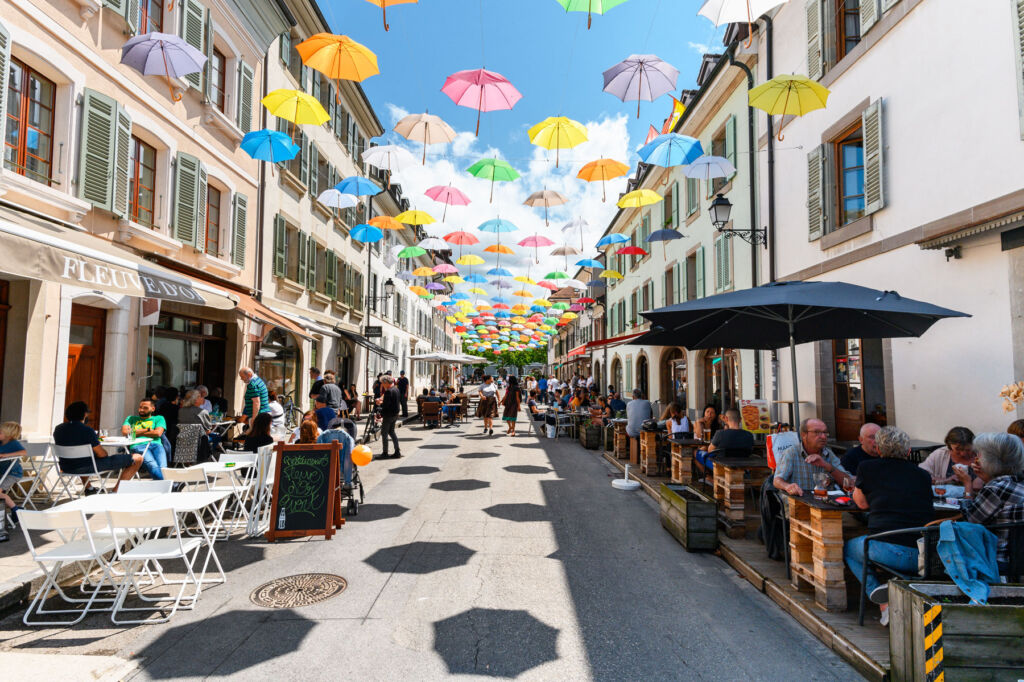 The actual centre of the old town, however, is the Place du Bourg-de-Four, which is the oldest square in the city. Quays, lakeside promenades, countless parks, lively side streets in the old town and elegant shops are a joy to stroll around in. You’ll also find one of the best-maintained streets here, the Grand-Rue, where philosopher Jean-Jacques Rousseau was born.

While it’s a joy roaming around the streets, you can always hop aboard one of the four Mouettes (seagulls), a type of water taxi enabling crossings from one shore to another. My friend Katy and I had no problem with our legs but just enjoyed jumping aboard them whenever we fancied. Besides, with so little time and much to cram into our itinerary, it was quicker to get across the banks with the water taxis running every 10 minutes.

The Swiss are super punctual, and the famous Flower Clock created with 12,000 seasonal flowers sitting pretty at the corner of Jardin Anglais is a nod to the Swiss’s timekeeping. Built in 1955, the clock is not just aesthetically pleasing but tells the time with Swiss precision – the time you see is transmitted via satellite. You can get a cracking view of it from the Big Wheel just yards away. Want to know another fact? The seconds-hand is 2.5 metres long, making it the world’s longest—one for the quiz night. 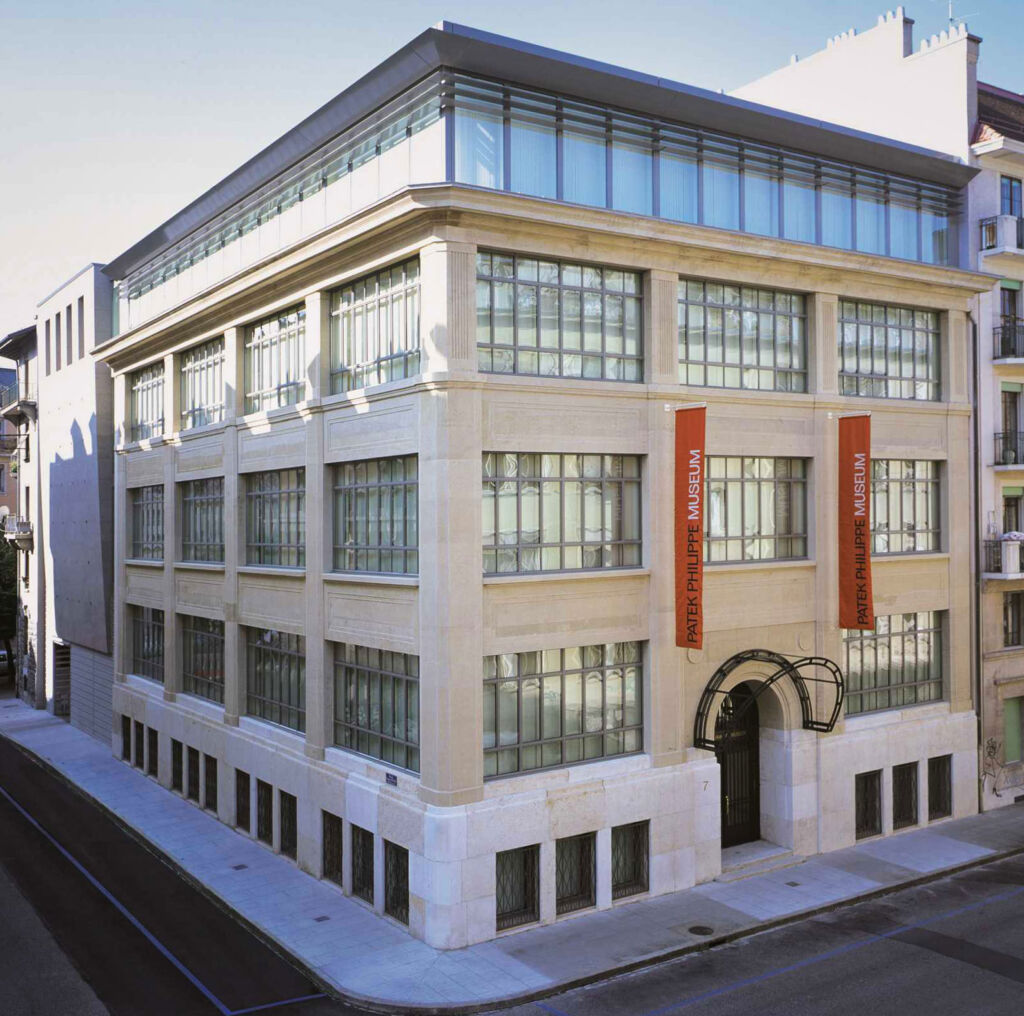 If you’re a watch enthusiast (and we know the Swiss are very good at making them), you may want to head to the Patek Philippe Museum, which takes visitors on a journey through time, exploring 500 years of watchmaking history. Housed in the building is a beautiful collection of Genevese, Swiss and European watches and enamel works dating from the 16th to the 19th centuries.

Talking of clocks, the tallest pendulum clock in the world is mounted on the lobby wall in Hotel Cornavin, where I stayed during my visit. Covering nine floors of the hotel, the clock comprising of steel circles is 30 metres long (the pendulum itself is 26 m long) and weighs about 350 kg. 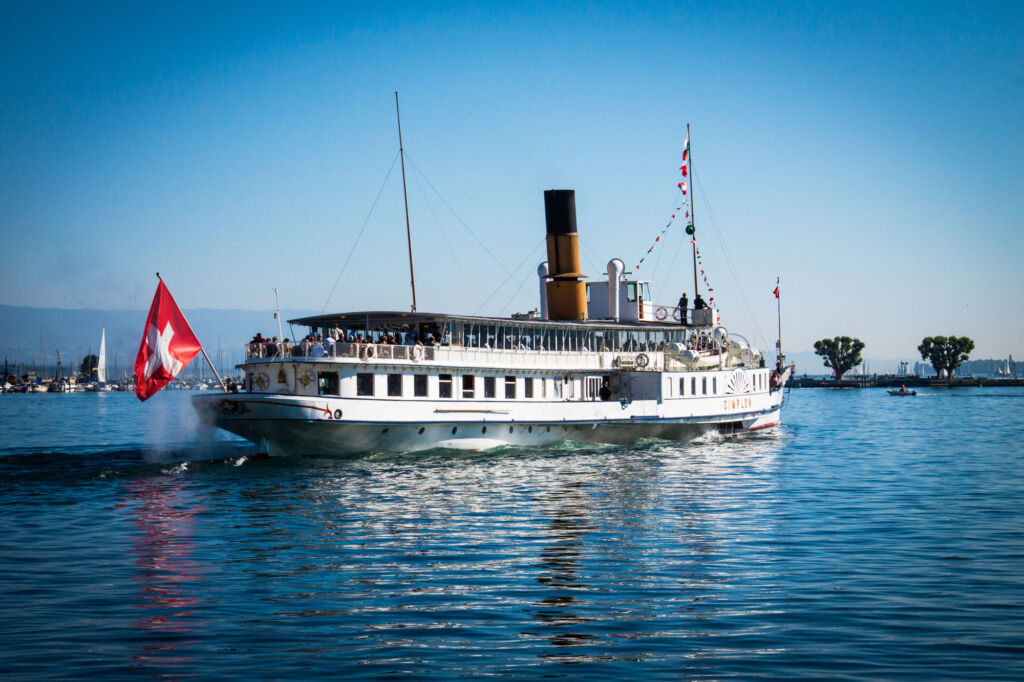 If, like Katy and I, you’re lured by the Lake, why not treat yourself to a cruise? Being on Lac Léman is a true marvel, especially if you are partial to a cruise. We decided to leave land behind and boarded one of the seven Belle Epoque paddle cruisers, where we enjoyed a lavish lunch in the first-class lounge on the upper deck. The Belle Époque boats have been navigating Central Europe’s largest inland lake for 140 years and offer fantastic cruises between France and Switzerland.

The views from aboard the “SAVOIE” were nothing short of spectacular., We could admire the parks, the magnificent villas, the monuments and the Palais des Nations that border the Petit-Lac. All of these splendid delights were savoured as much as the food. Boaters can choose from a set menu or from the a la carte with wines, spirits or soft drinks to match before having a post-lunch nap on one of the sun loungers on the deck.

Beach lovers will be delighted to know that there is a dedicated sandy space within the city. Some of the aforementioned sights, including Jet d’Eau, the harbour and St. Peter’s Cathedral, are best viewed from the Bains des Pâquis (Pâquis baths) without as much as leaving your sun lounger. This genuine peninsula on the lake is popular with Genevan and visitors alike. 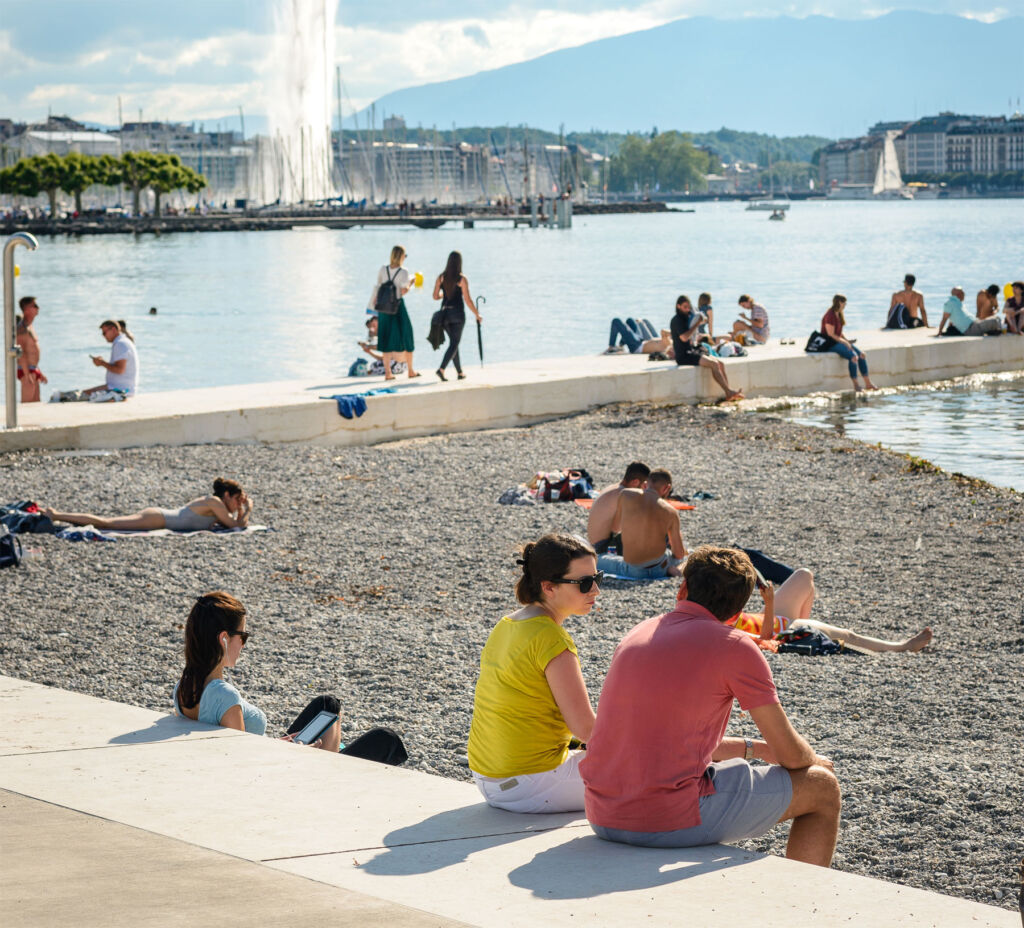 It’s a favoured spot for bathers in the summer, while in winter, it’s an ideal place to head to for a heartwarming cheese fondue. Hammam and Turkish baths complete the experience and are open all year round. It’s most certainly more than just a beach. 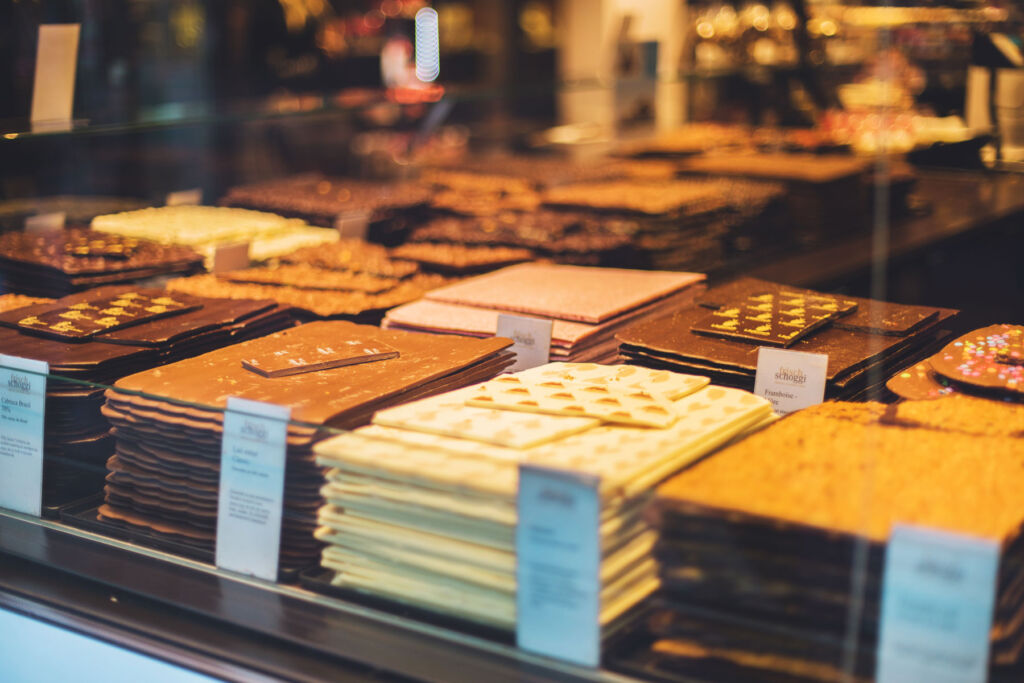 The Swiss are lauded for their mountains of chocolate, and there is no shortage of chocolate shops here. Lovers of the sweet stuff can get their hands on the Choco Pass, which helps them to push open the doors of Geneva’s greatest chocolate makers to taste their most delicious specialities. 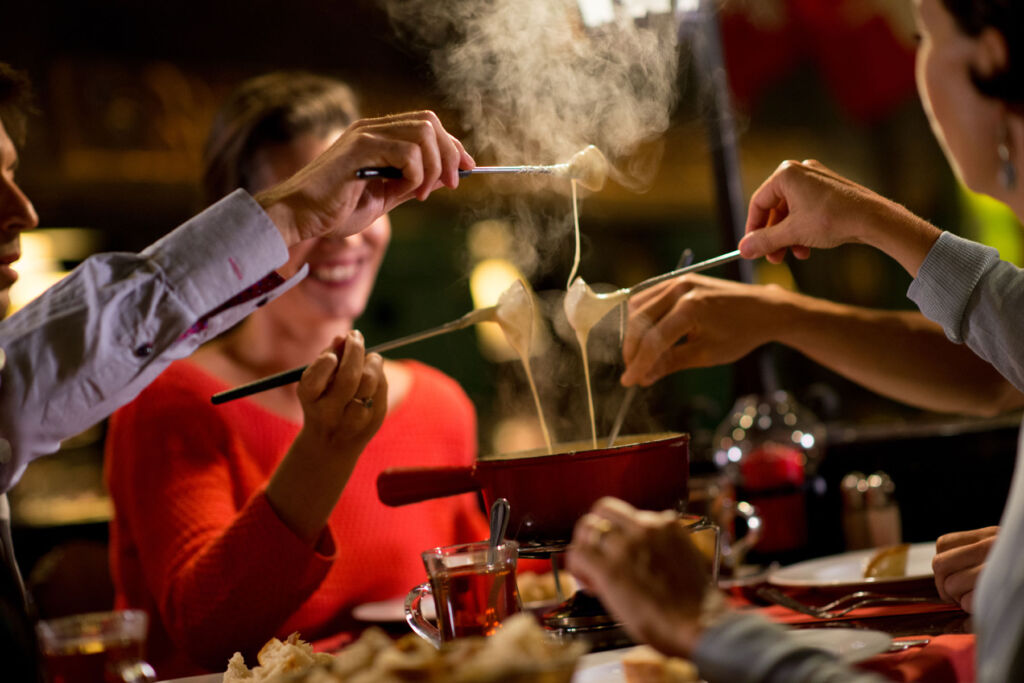 The good news is that gastronomy is taken equally seriously, and I had the envious task of sampling some of the best foods on offer. I’d make a very poor food critic here as I found it difficult to fault any of the food I sampled. 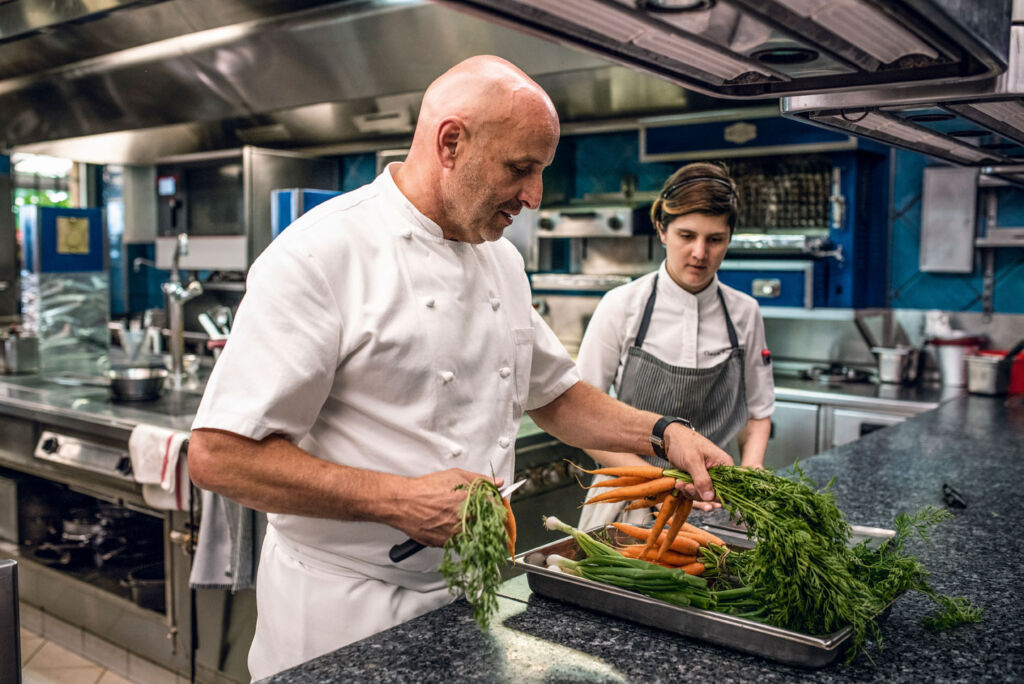 To name a few of my favourites, the Hotel-de-Ville (with its creation of Swiss specialities in huge portions) and the Chez Philippe left a mark on me. The latter was reminiscent of a micro-enclave of New York in the heart of Geneva and served up one of the best-slow-cooked lambs I have ever tasted. Meanwhile, La Potiniere, located on the banks of the lake near Jardin Anglaise, served up the freshest tuna steak one can get with a side of chips and coleslaw. 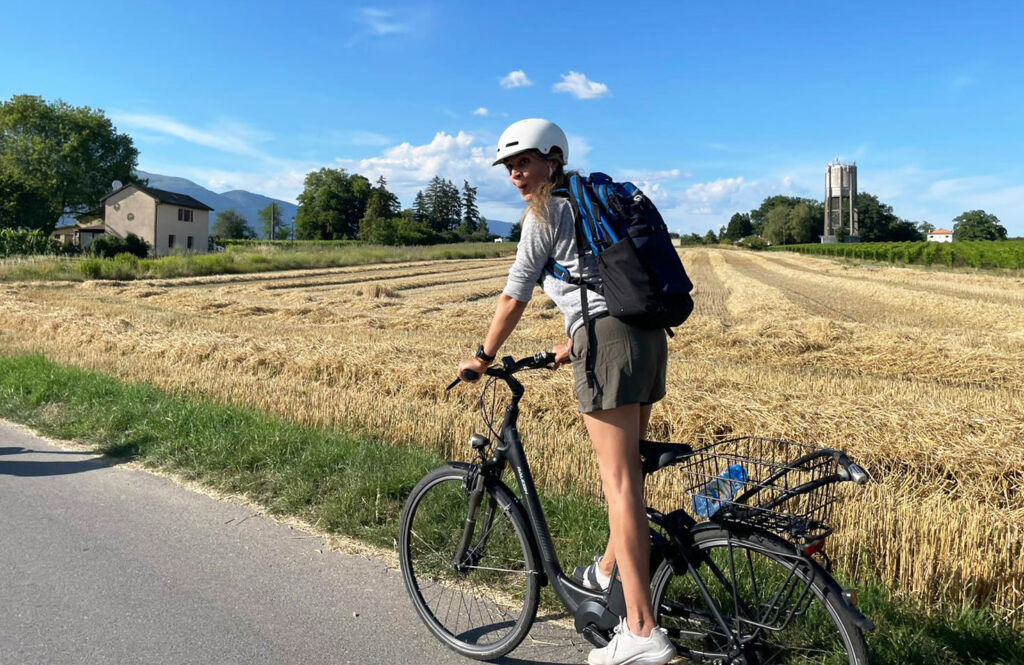 Being in the city of Geneva may feel like it’s hours away from nature. But 15kms away, you can find yourself immersed in the countryside. Should anyone wish to take a break from the city and inhale the countryside air, I recommend taking an e-bike tour. There are plenty of guided tours to be had around Geneva’s vineyards. Katy and I were sold as we strapped on our bike helmets for some exercise with a pit stop at Les Perrieres Cave Domaine for a wine tasting session.

Who knew Geneva had an art district? Nope, neither did I until I arrived in the city. Swapping the two-wheel bike for a chauffeur-driven taxi two-wheeler, I booked myself in for a couple of hours touring the urban art district. Art is hidden everywhere, from walls and fences to pavements. 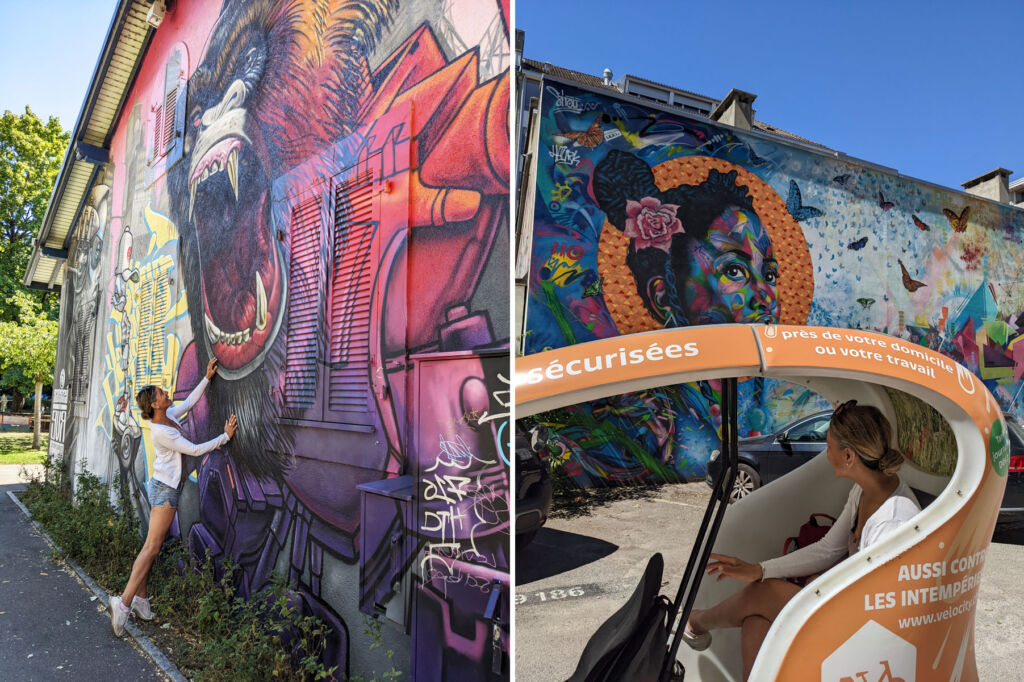 Sometimes it’s enough to take a few side roads to see the art right in front of you, while at other times, you have to look a little harder for the hidden gems. There are some talented artists in the area, but it was rather upsetting to see that some of the walled pieces had graffiti plastered on top of them, which the city council is determined to tackle. My guide told me they have daily ‘graffiti patrol officers’ who seek out fresh scrawls and eradicate them within 24 hours. 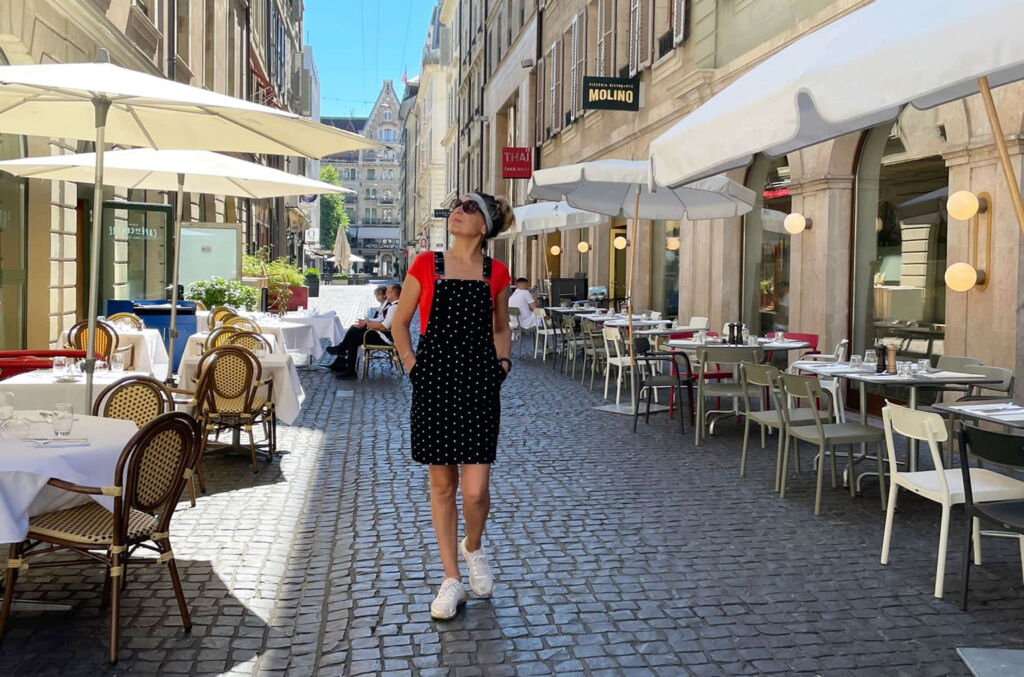 I can’t believe it’s taken me this long to get ‘on the ground’ in Geneva, and I only scratched the surface. Geneva has enough energy of a big city yet is small enough to offer tranquillity and life at a slower pace. Visitors can make the most of the City Pass, which offers more than 50 attractions. From August, the City Pass (24, 48 or 72 hours) is available via email before you fly. Whether it’s a whistling stop or a weekend break, Geneva is a city that’s worth making a stop for. As the saying goes, ‘it’s the journey and not the destination that matters.’

Geneva – Where and How?

The Resort Pass website can be found here: www.geneve.com/en/plan-a-trip/special-offers/resort-pass.

Flights from London to Geneva start from £46 return, with direct flights available with EasyJet, British Airways and SWISS.

Read more guides, reviews and features in our travel section. 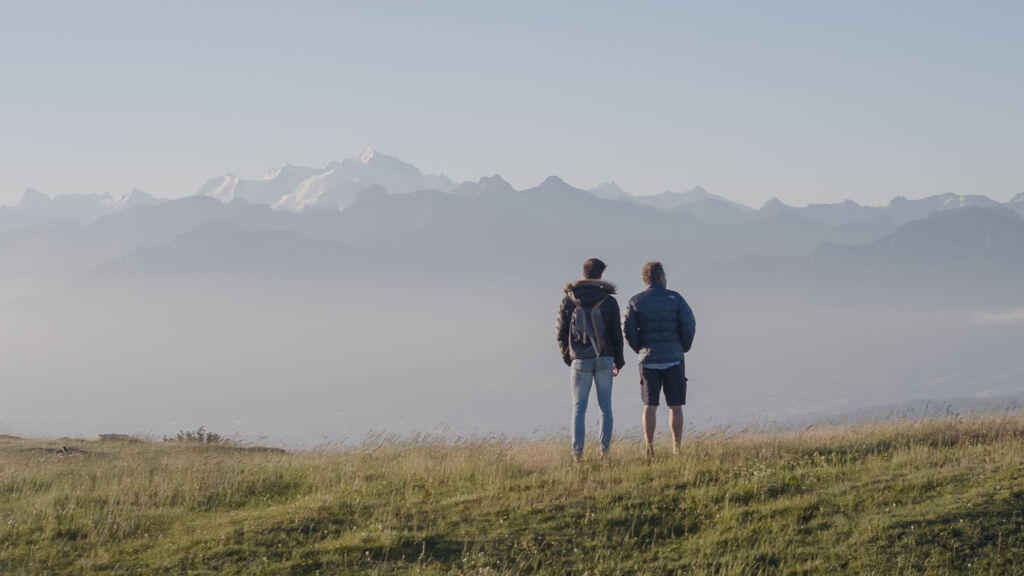