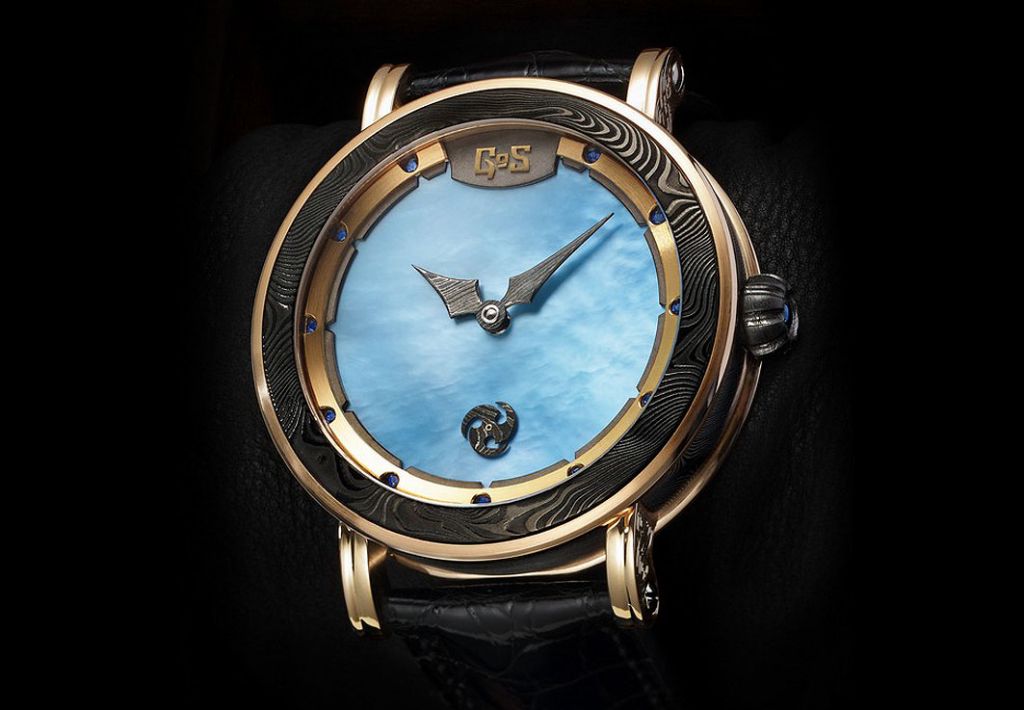 GoS, the Scandinavian watch brand which became famous for their artistic use of Damascus steel is back with a brand new Norse-inspired model called Skadi.

This new model from GoS combines black Damascus steel with red gold and glacier-blue luminous Mother of Pearl to illustrate the landscape ruled by Skadi – the Winter Goddess in Norse Mythology.

The name Skadi is pronounced ‘Skah-dee’, and it personifies strength, courage, and endurance. Her most mentioned attributes are her bow and skis as she is very skilled at using them both to hunt and to engage in battle. 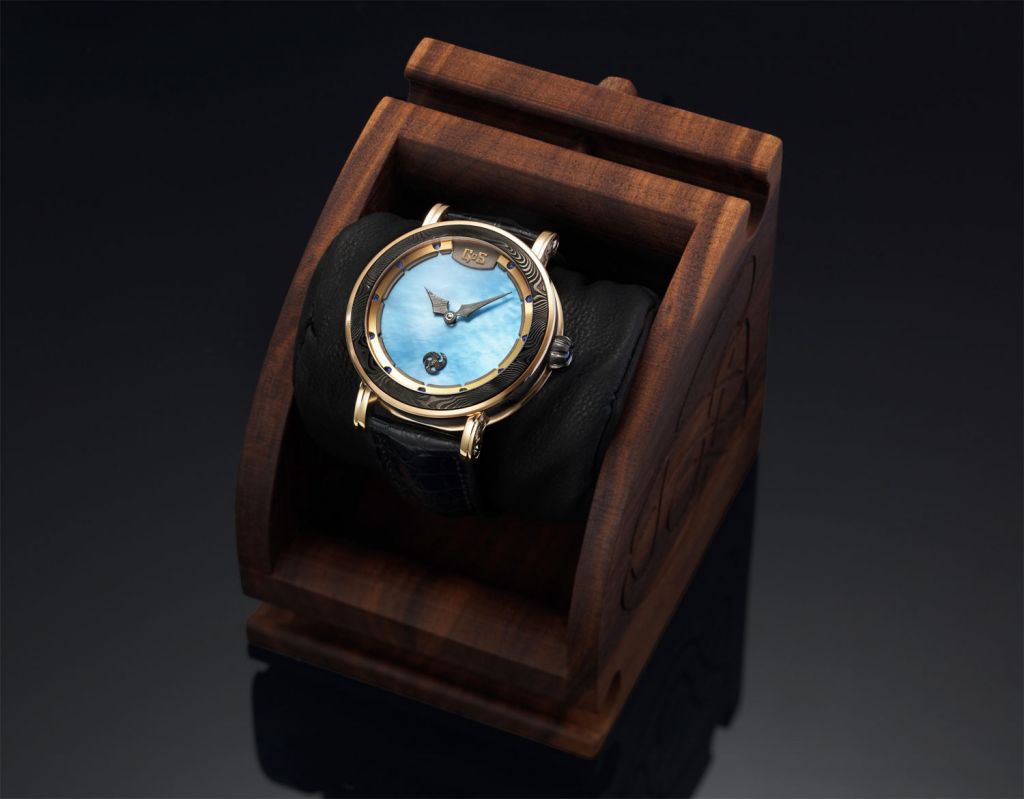 The hands and movement components utilise Johan Gustafsson’s Damascus steel which is evident in previous GoS models. The engraving on both case lugs and movement is done by master knifemaker Anders Hedlund, who’s also done the outstanding engraving work on Sarek Trollius.

Another master craftsman joining the GoS collective is master goldsmith Peter deWit. Peter casts the 18k gold parts for the case and has his jewel fitters apply the premium quality blue sapphires in all indexes and the hand-sculpted Damascus steel crown. 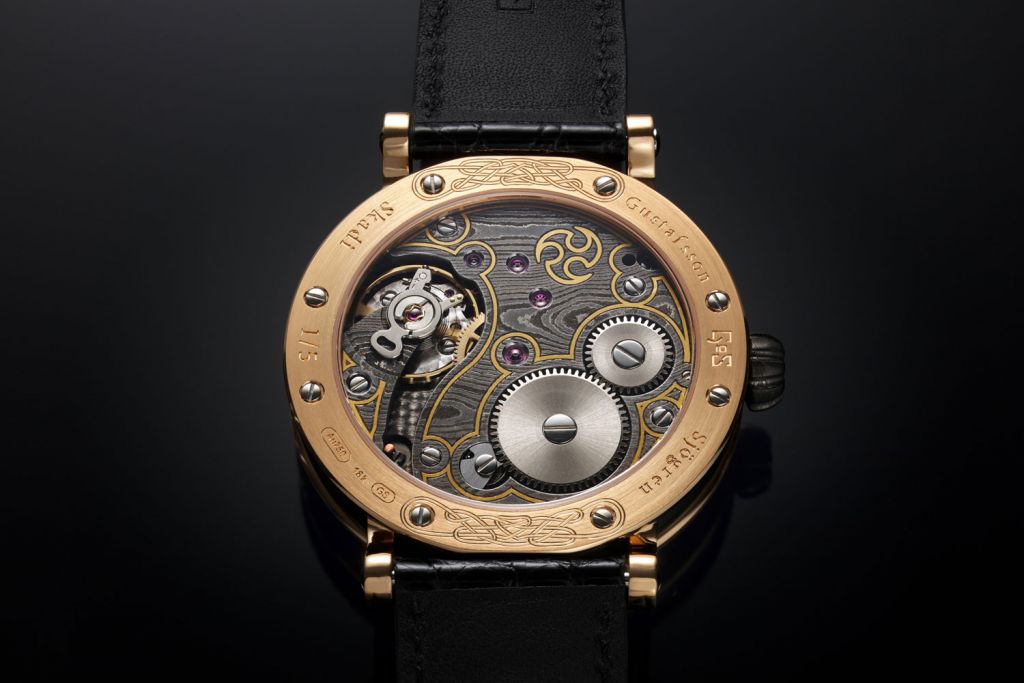 A Damascus steel pattern usually looses most of its contrasts within the pattern if the material is coated. However, the industry strength PVD coating that GoS is developed in Sweden and has superb qualities that enhance the contrasts. The black polished elements of the pattern-welded steel are deep black but also sparkle with light reflections.

The dial is made from white Mother of Pearl, which is both coloured and backlit through clever use of modern Swiss Super-Luminova. This technique was developed by Patrik Sjögren during 2018 and was first introduced in Sarek Glacier during Baselworld 2019.

The icy blue glow has a close resemblance to the light reflections in a snowy landscape during a moonlit night.

The dials consist of three layers; a brass base dial, a thin mother-of-pearl disc and the hand-applied SuperLuminova in between.

The collaboration with Master knifemaker Anders Hedlund continues as he engraved both the sides of the lugs with a Viking knot pattern and the Damascus steel bridges of the movement.

In 2018, Anders Hedlund was awarded “Best in Show” at the Solvang Invitational custom Knife show and also received the “Wooden Sword award” presented by the book “Knives 2018”. These awards underline the general view that Anders is the worlds best knifemaker.

The movement bridges are manufactured from one solid piece of Johan Gustafsson’s unique Damascus steel. 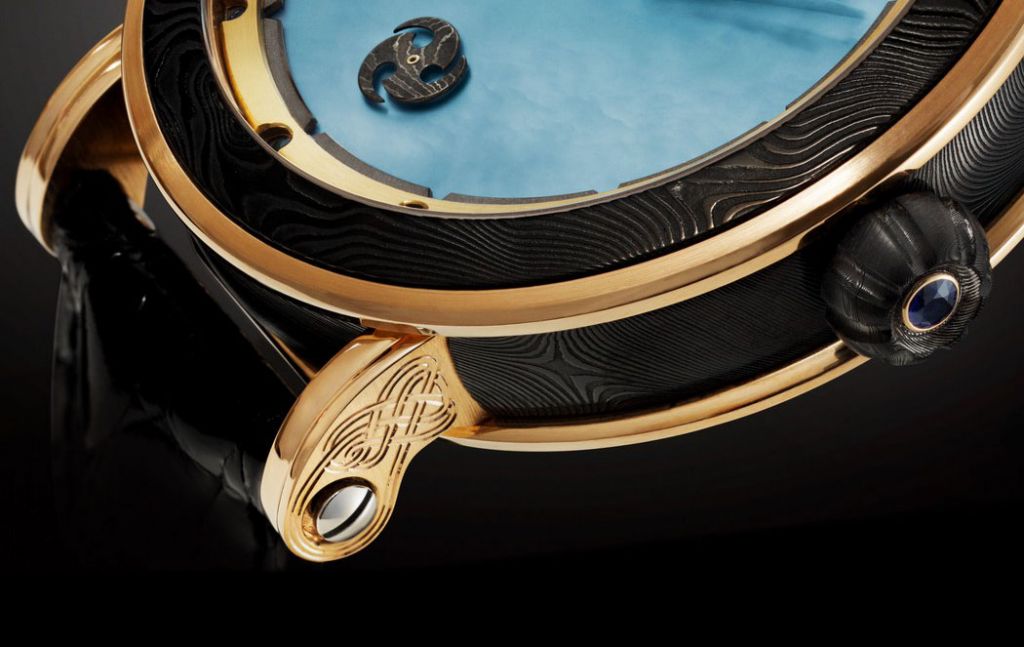 For Skadi, Anders drew inspiration from historic Viking shield decorations and opted to fill the engraving with gold for maximum contrast to the Damascus steel. The final finishing step highlights the patterns on the high-gloss polished bevels and illustrates how the Damascus steel pattern continues through the material.

The story of Skadi as described in Snorri Sturluson’s Prose Edda, written in Iceland during the early 13th century.

Snorri Sturluson explains that Skadi’s father was killed by the gods after stealing the golden apples of Idun. The items were reclaimed, and the gods returned to Asgard, thinking all is well. Unfortunately for them, Skadi isn’t the sort of daughter to sit by quietly and let her father’s death go unavenged. She girds herself in armour, takes up arms, and storms Asgard itself to face the gods responsible for her father’s death.

The gods are a little nervous when they see Skadi, so they attempt to work out a deal with her. A common Norse practice as a blood price – the family of one who was slain, would be paid money to compensate them for their loss. The gods offer Skadi a blood price of gold in exchange for her father’s death.

She explained that she was in possession of all the gold she ever needed. When her grandfather Olvaldi had died, he left much gold to his sons and one of them was her own father and now she had this gold. Instead, Skaldi wanted to have a husband from among the gods.

Still intimidated by her warlike stance, the gods agree to her demands. However, they tell Skadi that she must choose her husband without seeing his face: all she will be allowed to see are his feet. So she did…

Premium tapered strap and Swiss-made deployant buckle in 18k gold
GoS watch straps are normally made from moose leather sourced by GoS, but the strap selected for Skadi No.1 is a glossy black Alligator. However, we offer alternatives to further personalise the watch with straps in different leather qualities and stitching. The Swiss-made deployant buckle is in solid 18k gold, and the supplier’s patented and elegant snap-lock mechanism has been proven to be flawless by major premium watch brands. 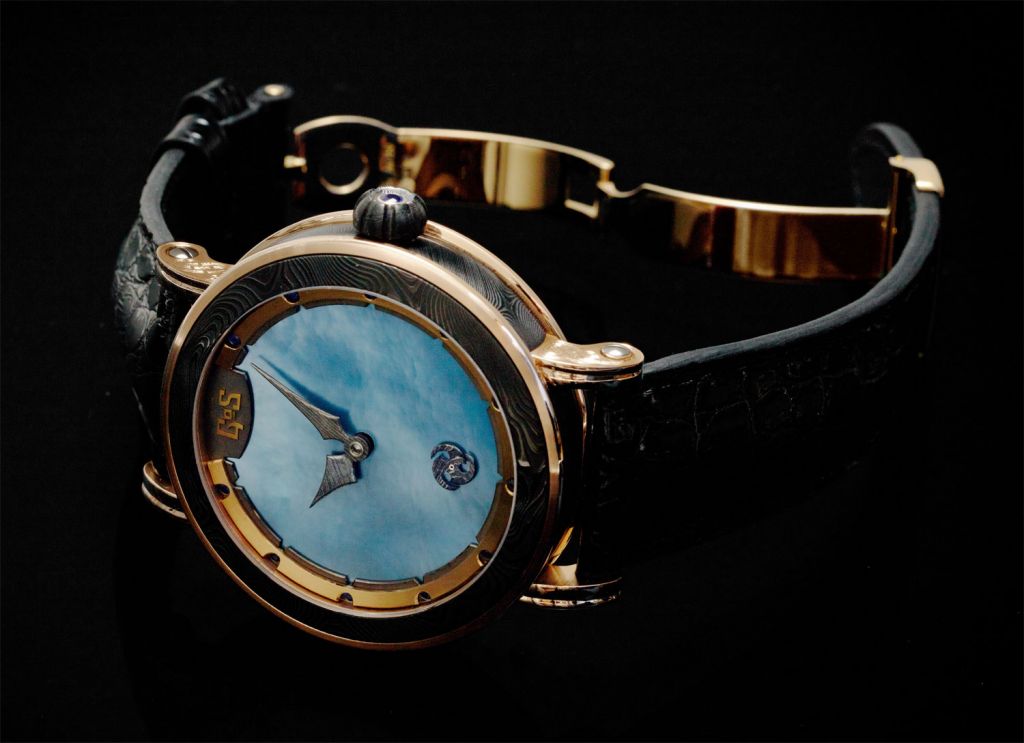 The retail price of Skadi is US$42.000+ applicable taxes. Further bespoke elements such as different strap materials or colours on request. The photos show No.1/5, which is sold while the other four are produced on order with estimated delivery in September (2pcs) and December 2020 (2pcs).