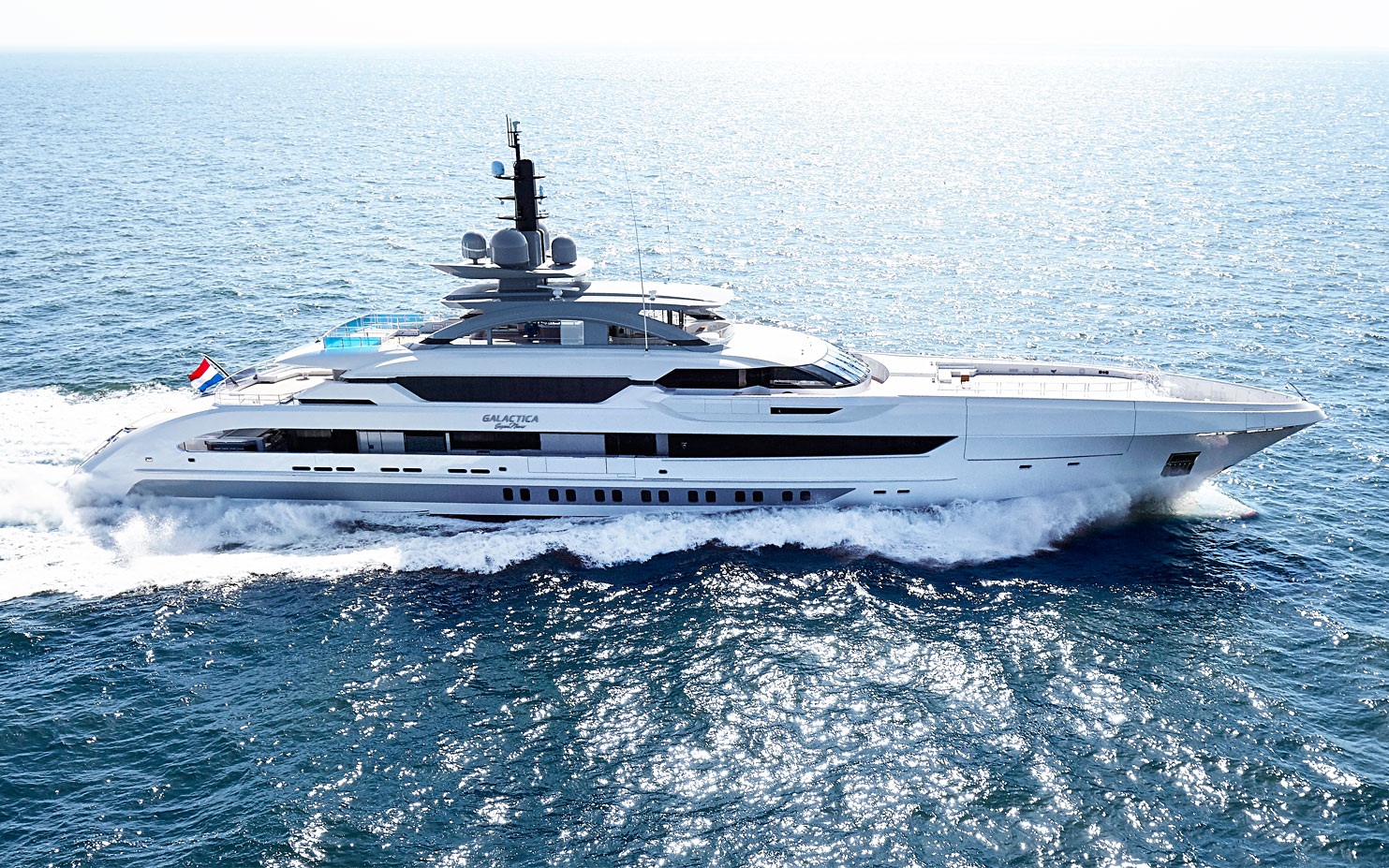 Heesen Yachts is literally making waves in the superyacht industry, and for all the right reasons. They are today the world’s leading manufacturer of high-performance yachts and have become renowned for their innovative creations which are built for exceptional speed, range, stability and comfort.

Heesen is responsible for the technical aspects of a boat, as well as the build, but works very closely with external studios to shape the exterior and interior. In the case of the 70-metre (230-foot) fast-displacement Galactica Super Nova, it was brought to life from concept to production in just 35 months after Heesen’s “Project Kometa” was sold in December 2013. The man at the helm of this remarkable feat of engineering, was Andrea Bonini, a passionate and straight-talking Project Manager from the Monaco-based Espen Øino International which has conceived 45 of the world’s superyachts. 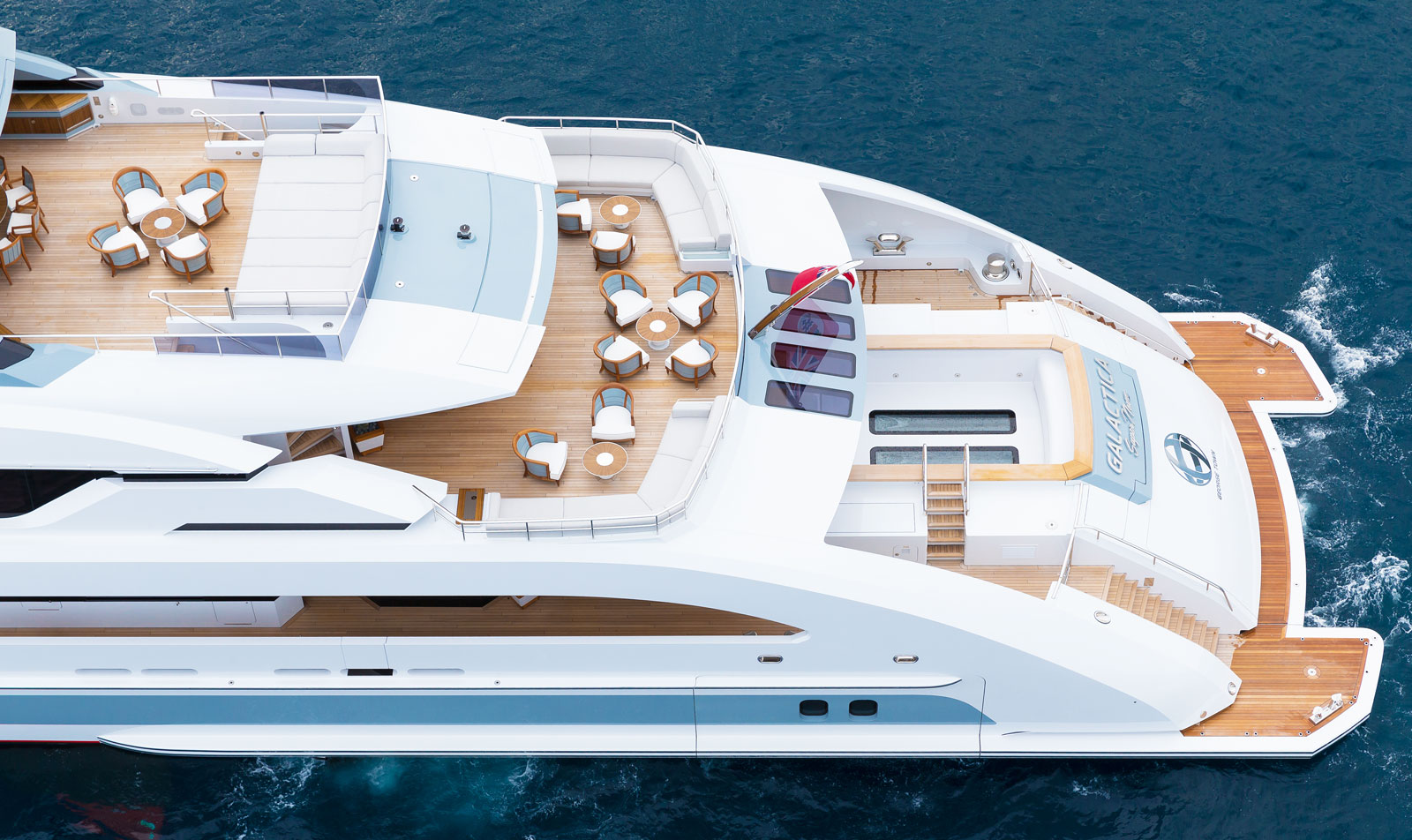 Stepping onto the solid Irish teak decking of Galactica Super Nova with bare feet, in the privileged company of Bonini, the exceptional quality of finish which characterises the “Finest New Superyacht” of this year’s Monaco Yacht Show, reverberates through your soles.

Our exclusive guided tour of the different areas of the boat, in which stainless steel plays a leading role, saw Andrea pointing out the minutest of details which all come together to form this truly spectacular masterpiece which also claimed the award for “Best Exterior Design” at the show. For example, on the sun deck, hand railings have an elliptical shape, rather than being round, to make them easier to grip, whilst on the underside of the curved inside-outside bar, it took 15 concepts for the stainless steel supports before the final design, that Espen himself was also happy with, was settled on.

This is not forgetting the other challenge of how to bring together the bar’s ten different joins between the white Iranian onyx, the rare black Emperador marble and the ribbed back-lit glass. 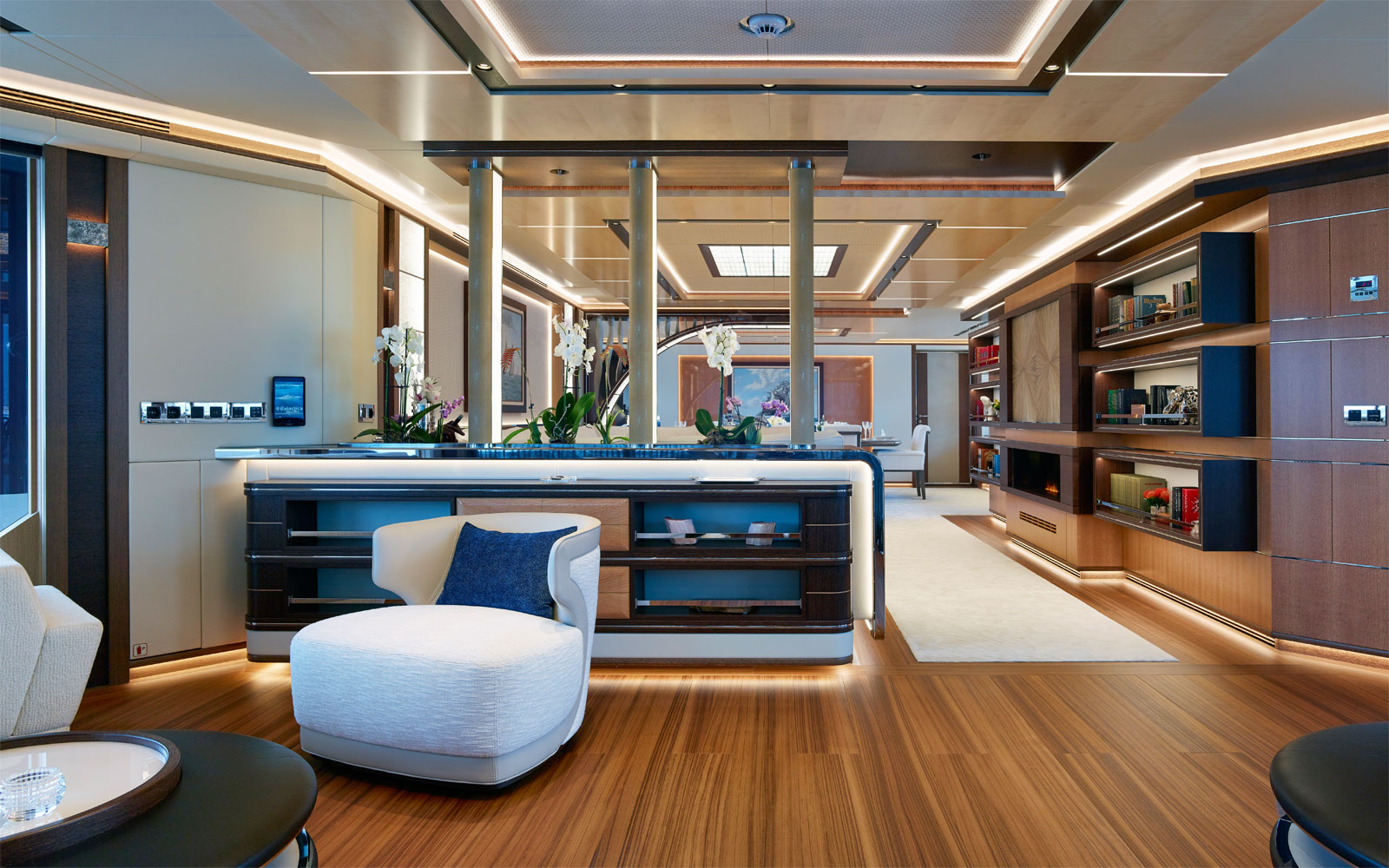 Furniture has been custom-made, including the hand-crafted bar stools which swivel 360-degrees, and all grains in every single table top converge in the same direction so as not to break up the gaze of the eye. The soft seating, which was made in collaboration with Sabrina Monte-Carlo, is dressed with cushions that feature the yacht’s very own Saturn-like logo which also appears on the shoebox, and of course, the onboard slippers. Bonini explained that sometimes the design of the insignia can almost take as long as the yacht, as it’s still an integral part of the boat’s overall look in the eyes of the purchaser. 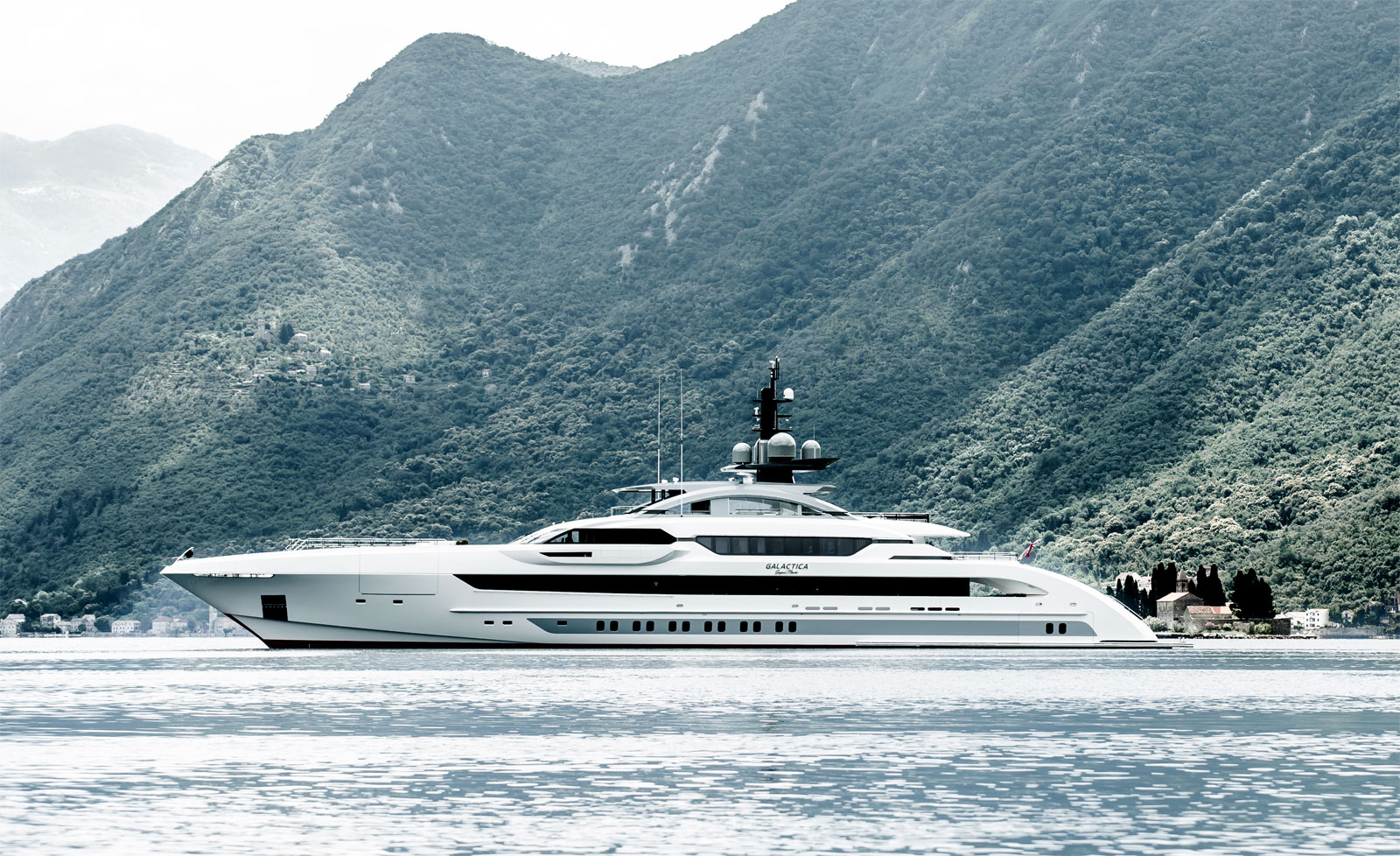 As you walk from one end of the yacht to the other and ride in the crystal cylindrical lift to move between decks, no stone has been left unturned. The beautifully sculpted front and rear flagpoles which share the same 316L stainless steel as an OMEGA watch, required hours of polishing to get the smooth finish, and even the matt black mast, the highest point of the yacht, equates to a work of art.

Form and function have been cleverly married right down to the hooks used for the crew to attach their climbing gear to wash down the outside of the vessel which is concealed from view. On this point, it takes a staggering three days to clean the yacht from start to finish, but then again, the work is never done, as there is always something that needs to be polished, dusted or wiped so that Galactica Super Nova is consistently looking at its very best. 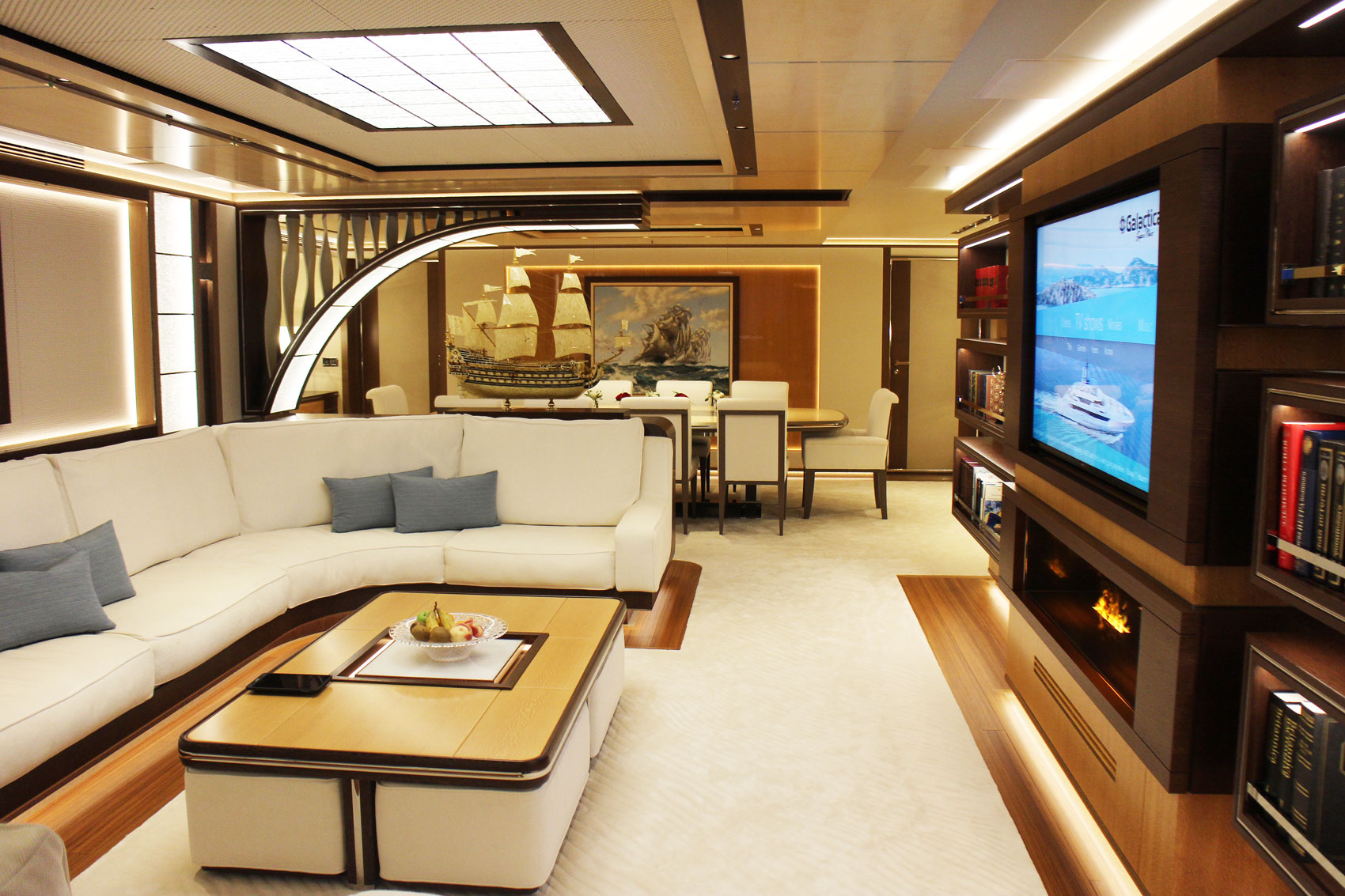