Hrithik Roshan started in the movie industry early with acting roles in the 1980s but it wasn’t until the year 2000 that he got his first leading role in the movie ‘Kaho Naa… Pyaar Hai’ (Say… you Love me) opposite Amisha Patel. Due to the huge success of ‘Kaho Naa… Pyaar Hai’, Hrithik Roshan became a true movie superstar overnight and subsequently won the ‘Best Actor’ and ‘Best Male Debut’ Filmfare awards for his dual roles as Rohit / Raj Chopra.

More films followed over the next few years including Dhoom 2 and the historical epic Jodhaa Akbar where he played the lead role of the Mughal Emporer – Jalaluddin Mohammad Akbar. The movie was greeted with much critical acclaim. The Charlotte Observer ranked ‘Jodhaa Akbar’ the second best film released in 2008, Rajeev Masand of CNN-IBN said “I felt privileged as a moviegoer. Privileged that such a film had been made, and privileged that it had been made in our times so we can form our own opinions of the film rather than adopt the opinions of previous generations”. ‘Jodhaa Akbar’ went on to win numerous Indian and International awards, and for his role in the movie Hrithik won the ‘Best Actor’ award at the Golden Minbar International Film Festival and his fourth Filmfare ‘Best Actor’ award. 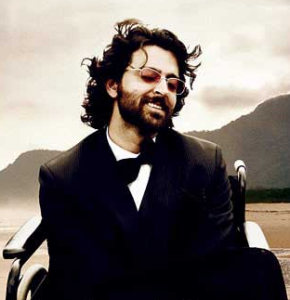 You would imagine that after such plaudits and critical acclaim an actor would just play safe and stick to ‘bread and butter’ roles, but this was never going to be the case with this versatile actor. Hrithik took on perhaps his most challenging role as Qudraplegic former magician Ethan Mascarenhas in the movie ‘Guzaarish’ opposite Aishwarya Rai creating perhaps the most beautiful on screen couple in cinema history. ‘Guzaarish’ was released during November 2010 to critical acclaim with awards and nominations at all the leading Indian film award ceremonies.

Fast forward to the start of 2011 and Hrithik Roshan is preparing for the launch of his latest movie ‘Zindagi Na Milegi Dobara’ in July. The film stars Hrithik, Abhay Deol, Farhan Akhtar, Kalki Koechlin and Katrina Kaif and is a story about three friends that finally embark on a road trip that they should have made four years ago. A road trip where each one gets to do the ultimate sport of his choice and the other 2 just have to do it with him. Filming took place in a number of locations including Barcelona, Pamplona, Bunyol, Andalucia in Spain, Egypt and Mumbai.

Luxurious: You came from a family of cinema personalities and landed your first role in a movie at the very young age of six. Was a career in acting something that you felt you were destined to embark upon? And were there times when you questioned if this was the right path for you?

Hrithik Roshan: I was lucky enough to have grown up within the industry and surrounded by some amazing role models from within my family, as well as beyond. At six, it was too young an age to really think about my career. Yes, you have those childhood whims that you want to be this or that, but the older I got, I certainly didn’t think that a career in front of the screen would ever be a reality – well certainly not as a hero. I was quite a shy, nervous young lad. I had a stammer which I was extremely conscious of and I was quite chubby. Although I excelled in my studies, I guess I always felt I would work within the industry in some capacity or other, but never as a lead actor.

I was assistant director on a couple of my father’s earlier films but as time went on, the possibility of appearing on screen became a reality and I have never looked back. The industry is such a big part of my identity that it has always felt completely natural and intuitive to me.