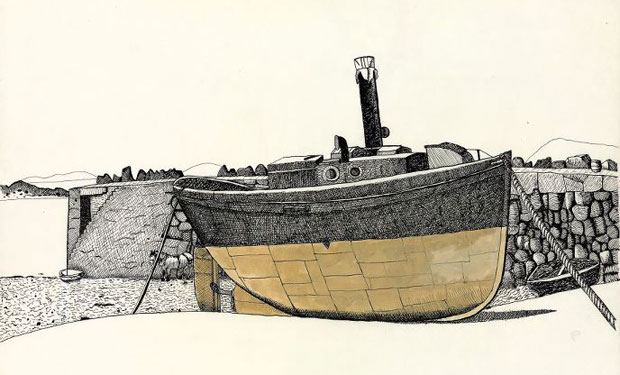 Francis Outred, Christie’s Head of Post-War & Contemporary Art, Europe: “’2012, the year of the Olympics, is a big year for major British artists in London, with David Hockney at the Royal Academy, Lucian Freud opening at the National Portrait Gallery in February and Damien Hirst at the Tate through the summer. We are delighted to be further celebrating this in our February auctions. Alongside the outstanding Bacon of Henrietta Moraes, we are presenting an exquisite canvas from a key period by Freud and two drawings which span his career, an incredible discovery from 1948 which fills in some previously missing biographical detail and a stunning study of Bruce Bernard from 1985. Also in the auction is a very unusual study of Henry Geldzahler, Hockney’s great friend and champion, from the same period”.

Boat, Connemara is a meticulous and emotional drawing executed in 1948 by Lucian Freud, while the young artist was on holiday in the Irish countryside (estimate: £200,000-300,000).

Rediscovered recently, the drawing was originally purchased directly from the artist’s studio by accomplished architect, collector and patron W. G. Howell. The present work is a significant piece in the late artist’s oeuvre, showcasing his fine draughtsman-ship skills with just a pen and tempera, and reflecting his style of the late 1940s before the focus of his work switched to oil portraiture. Freud travelled to Ireland for three weeks in August 1948 and produced only two works during his stay on the Irish coast, one of which is Boat, Connemara, where he sketched his picturesque surroundings and the lonely vision of this large vessel resting upon the empty shore. The young artist employed a masterly technique of calligraphic patterns, hatching and cross-hatching, reminiscent of old masters’ etchings, with just a hint of colour which contributes to highlight the main subject of his attention. Fresh to the market and unseen for 50 years, this exceptional rediscovery will attract the interest of discerning collectors.

Christie’s is also pleased to present several other important works by Lucian Freud this February. Each coming from a different private collection, they span Freud’s oeuvre.

Executed in 1985, Head of Bruce Bernard is a masterful drawing by Lucian Freud capturing one of the key figures in his life: the journalist, author and photographer Bruce Bernard. It is an affectionate portrait that prefigures two of Freud’s major paintings including Bruce Bernard (1992) and Bruce Bernard (Seated) (1996) and records the emotional rapport that existed between the artist and his friend (estimate: £120,000-180,000;). Painted between 1983-1984, Small Figure is an exquisitely rendered portrait of a woman, dating from a pivotal moment in the artist’s career (estimate: £1.5-2 million). It was during this period in the early 1980s that Freud carried out some of his greatest works, culminating in his widely acknowledged masterpiece Large Interior W11 (After Watteau) (1981-1983). Small Figure is perhaps best understood as a counterpoint to this large- scale depiction of close family and friends. In these contemporary works, Freud perfected his marriage of impasto and observation, translating the expression and almost tangible physicality of his sitters to canvas. Executed circa 1960, Annie is one of Freud’s earliest paintings of one of his children (estimate: £300,000-500,000). It depicts his eldest child Annie by his first wife Kitty Garman, daughter of sculptor Jacob Epstein. In the painting, Annie who is now an award-winning poet appears as a youthful, teenage girl. It is an intimate portrait that demonstrates the full, flushed contours of her glowing face and the heavy flounce of her dark, lustrous hair.

Additionally, a comprehensive retrospective of prints will be offered at auction in the single-owner sale The Printer’s Proof: Etchings by Lucian Freud from the Studio Prints Archive on 15 February 2012.

London is also celebrating another British major artist: David Hockney. As an important exhibition is currently on view at the Royal Academy, Christie’s has not only ‘Hockney On Paper’, a landmark sale of works by the artist at auction in South Kensington on 17 February 2012, but will also offer Henry Reading in the evening auction of Post-War & Contemporary Art at King Street (estimate: £380,000-550,000). Executed in 1985 it is a larger-than-life, playful, lyrical double homage in which the artist pays tribute to one of his artistic heroes and to one of his greatest friends. Created in a semi-Cubist style, Henry Reading clearly shows the artist making witty yet earnest reference to Pablo Picasso, over whose works Hockney has poured over the years. At the same time, this picture is a portrait of Hockney’s friend Henry Geldzahler. The shard of text at the centre of the composition recalls the printed words that appeared in Picasso’s Cubist works and is in fact a magnified excerpt from Klaus Gallwitz’s influential book, ‘Picasso: The Heroic Years’, which was published that year.