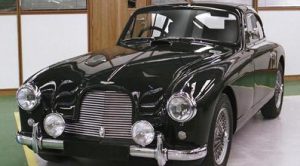 The DB2 was Aston Martin’s best selling model to date, but the economic climate for a two-seater car at this price was limited, so Aston Martin began work on making changes to the car.

Removing the cross-bracing above the rear axle had allowed space for two rear seats to be fitted and a lift-up rear door – which today we would call a hatchback – was let into the rear bodywork
for access to the luggage space. Further revisions to the body included seperate bumpers – the DB2 had a chrome rubbing strips – and a single piece windsreen. To counteract a small increase in weight, the 125 bhp Vantage spec engine was now standard.

The DB2/4 was shown at the London Motor Show in 1953, both saloon and drophead versions were available. Further improvements in the design of the body included a different shape for the rear quarter lights, headlamps set higher in the bonnet and improved bumpers.

In 1955 David Brown moved production to Tickford at Newport Pagnell when the second generation DB2/4 (which became known as the Mark II) was built. At its peak the DB2/4 was being built at the rate of six/seven cars a week even though it was strictly hand built.