I have been a fan of Omega watches since the 70s when my father first proudly showed me his gold plated Omega Seamaster Cosmic watch, as an adoring son, my view was that Omega watches must be the best watches in world if my own Dad wears one. (I was 9!)

Having been integrated into the ‘Unofficial Omega Watch Fan Club’, Omega’s of different types came and went from my household over the years, culminating in my acquiring my current favourite Omega watch, the Omega La Magique Cal 1357. The La Magique is a bit special, an incredible piece of engineering and as rare as ‘Hens teeth’, from my point of view, nothing was going to top this Omega Masterpiece.

Roll on to two weeks ago when I was notified that I would have the opportunity to buy an Omega Golden Seamaster ref. 168.023 18k yellow Gold with matching 18k bracelet, ‘apparently’ a very rare opportunity that I had to take.

So what makes this watch so special? Well I have to admit that two weeks ago I had no real idea and added to this didn’t know what the fuss was all about! Still, my very close friend (a well respected UK horologist) told me to try to buy it as it was an incredibly rare Omega watch. 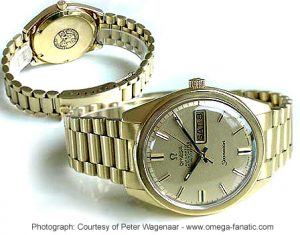 Before I try to buy anything, the first steps for me are to do research, research, research. The usual places I would go online would be the major auction houses, Christies, Sothebys, Antiquorum and Bonhams. After a couple of hours I had virtually nothing to show apart from one watch (an 18k white gold Omega Seamaster 168.023) that was sold at an Antiquorum Auction in April 2007 for 11,210 CHF.

11,000+ CHF for an Omega? That seemed quite steep based on the prices I had paid for other Omega Watches during the preceding years, maybe it was because it was white gold, maybe it had a hidden provenance that was yet to be revealed? My only option was to turn to old faithful ‘Google’ and keep searching.

In truth it didn’t take too long before I came up with the explanation, I found a blog called Omega Constellation Collectors run by someone called Desmond Guilfoyle. He had a link to a PDF document with an excellent insight into the Golden Seamaster, here’s some of what he provided:

One of the rarest watches Omega produced in the 1960s was the ‘Golden’ Seamaster Day-Date, reference 168.023. Powered by a calibre 751 certified chronometre movement, this model also came in gold top and stainless steel versions. Omega estimates that no more than 1000 of the Seamaster Chronometre Day-Date pieces – BA 168.023 (gold gold), BB 168.023 (pink gold) and BC 168.023 (white gold) – were ever produced, with only a few thousand of the corresponding gold cap and steel models being released to market.

WatchTime journalist, Michael Mehltretter, writing in 2002, revealed that despite comprehensive research, the golden chronometer Seamaster, ref BA 168 023, did not surface at all during the preceding ten years. He says that the “Seamaster Chronometre Day-Date is an absolute rarity”, and writes, “It was absent from the literature available from Christie’s, Sotheby’s, Antiquorum, and the German auction houses Dr. Crott and Henry’s.” It had also not turned up in any of the better-known collectors haunts. “Even the less elaborate versions in steel with yellow gold covering (ref. CD 168 023) were encountered only six times: three in the USA, once in a private collection in Germany, and twice at Henry’s over the last fifteen years”, he says.

The Golden Seamaster chronometre daydate is a beautifully fashioned design and large enough, at 36.5 millimetres diameter, to suit today’s preferences for size-able watches. Featuring a brush finished press-on bezel, the upper surfaces of the lugs are also brush finished, and a chamfer between the upper lugs and the brush finished side lugs is polished to a high gloss. The famous seahorse emblem is deeply embedded into the thick, solid gold case back.
Link to Omega Constellation Collectors blog.

So now I knew – this was no ordinary watch, this Omega was possibly rarer than my La Magique (261 manufactured) and certainly more sought after. There was absolutely no way that this watch wasn’t going to be mine, and as things panned out, it did become mine – Yay Paul! I bought it and sit here ecstatically writing this in the knowledge that I have joined a very exclusive Club – The Omega Golden Seamaster Club!

Michael Mehltretter couldn’t find one between 1992 and 2002 (possibly longer), I found one on Antiquorum from an auction back in 2007 and of course my own, only two watches in 20+ years – that’s what I call rare! My advice for all you sons of Omega wearing Dad’s – take a good hard look at what he’s got on his wrist, it may be worth a ‘Bob or two’!