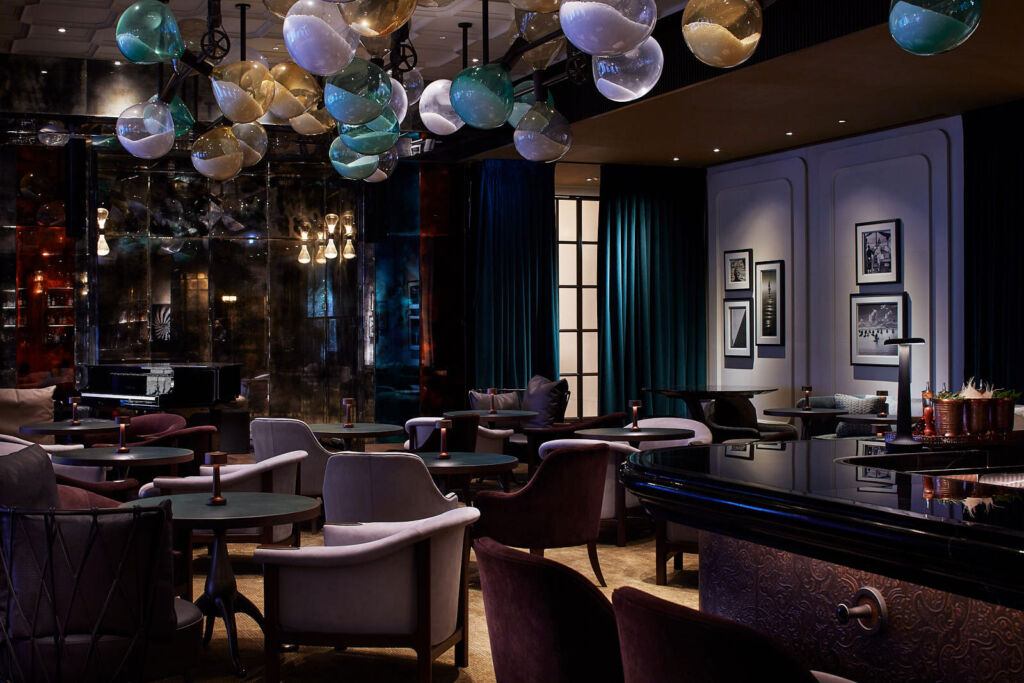 DarkSide at Rosewood Hong Kong, the sultry jazz and cocktail parlour, will be re-opening its doors in May, and they have something special lined up for patrons. To celebrate the re-opening, Arkadiuz Rybak, Rosewood Hong Kong Director of Bars, and Beverage Manager Simone Rossi and DarkSide’s mixology team, have created a “Modern Forgotten Classic Menu” inspired by retro cocktails of the last century.

If there’s one place you should be heading to for a fantastic night out in Hong Kong, it’s the Rosewood. The luxury hotel offers just about something for everyone, and one of its major draws is DarkSide, the sultry jazz and cocktail parlour.

In what will come as excellent news, it is all-set to re-open its doors on the 9th of May, and in celebration, the bar’s expert mixologists have unveiled The Modern Forgotten Classic menu. 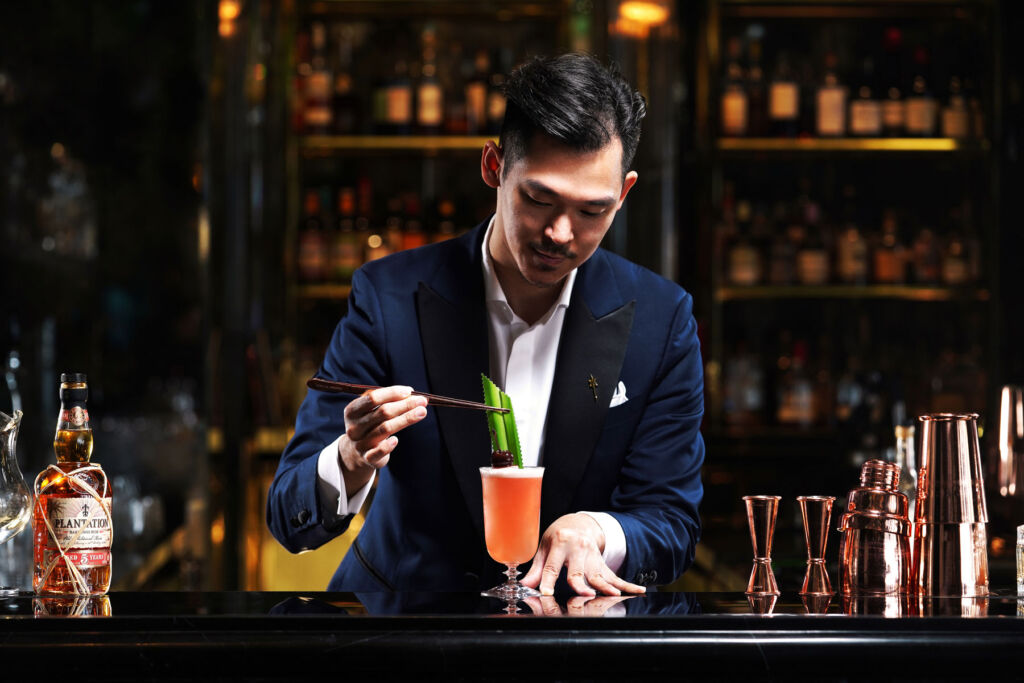 The Modern Forgotten Classic menu features the Jungle Bird, a Tiki-style cocktail created by Jeffrey Ong in 1978 for the opening of the Kuala Lumpur Hilton’s Aviary Bar – hence the name. DarkSide has re-created this very cocktail with Plantation 5-year-old rum, bitter Campari, freshly squeezed pineapple and lime, served in an Alto highball glass over a block of ice, garnished with a maraschino cherry and banana leaf. 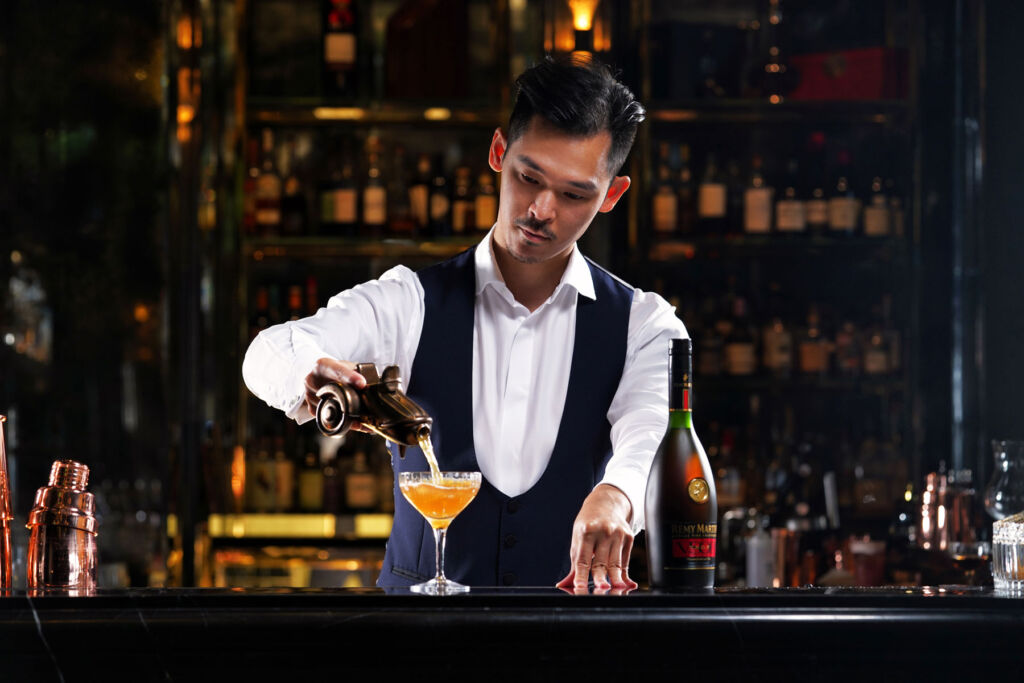 The exact origin of the Side Car is unclear, but it is thought to have appeared around the end of World War I in either London or Paris and was named after the motorcycle passenger conveyance. The Ritz Hotel in Paris claims the origin of the drink, and the first recipe for the cocktail appears in a book by Harry MacElhone in 1922. At DarkSide, patrons can expect a shaken drink that is first poured into a beautifully tailor-made ceramic side car crafted by Hong Kong local artisan “Tung Yao Ceramic.”

The cocktail, a composition of Rémy Martin VSOP, lemon and Pierre Ferrand Dry Curaçao, is then poured at the table into an elegant cut signature coupette glass. The cocktail doesn’t contain any sugar as per the original recipe but is balanced by the tangy sweetness of lemon sherbet, making it approachable for all palates. 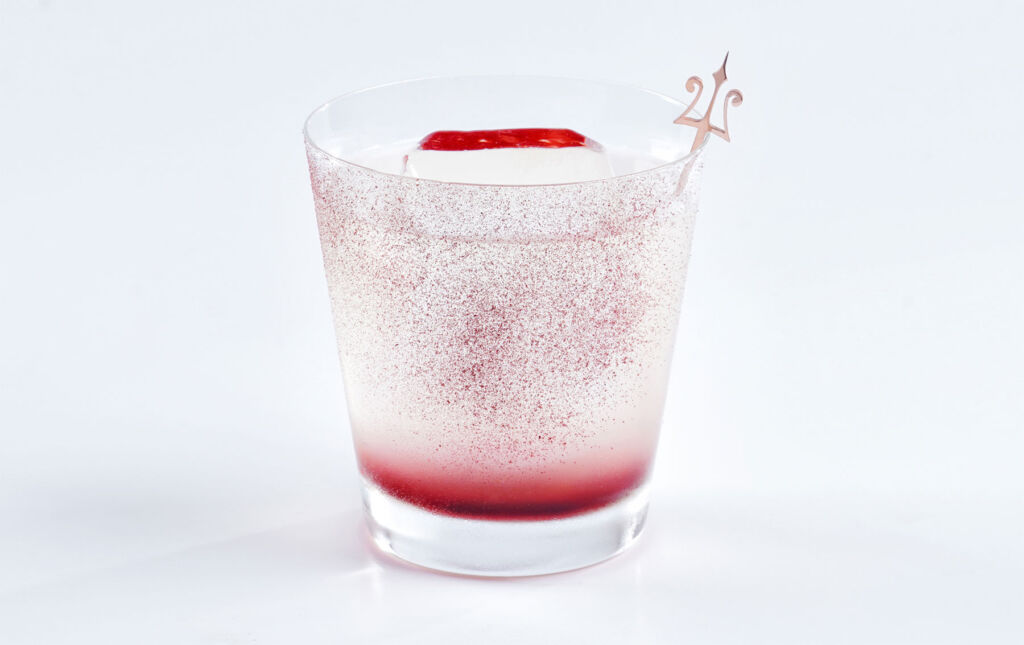 The Bramble was created in London in 1980 by Dick Brasell, who worked at the Soho bar Fred’s Club. His childhood memories of going blackberrying on the Isle of Wight inspired the “Bramble,” named after the term for blackberry bushes. A refreshing shaken drink, DarkSide offers a recipe of citrusy lemon, Star of Bombay gin and an undercurrent of blackberry notes given by Crème de Mure, which here sits at the bottom of the drink rather than on top as in the original recipe. Rather than a whole blackberry garnish, DarkSide finishes the cocktail with an elegant sprinkling of blackberry dust on top. 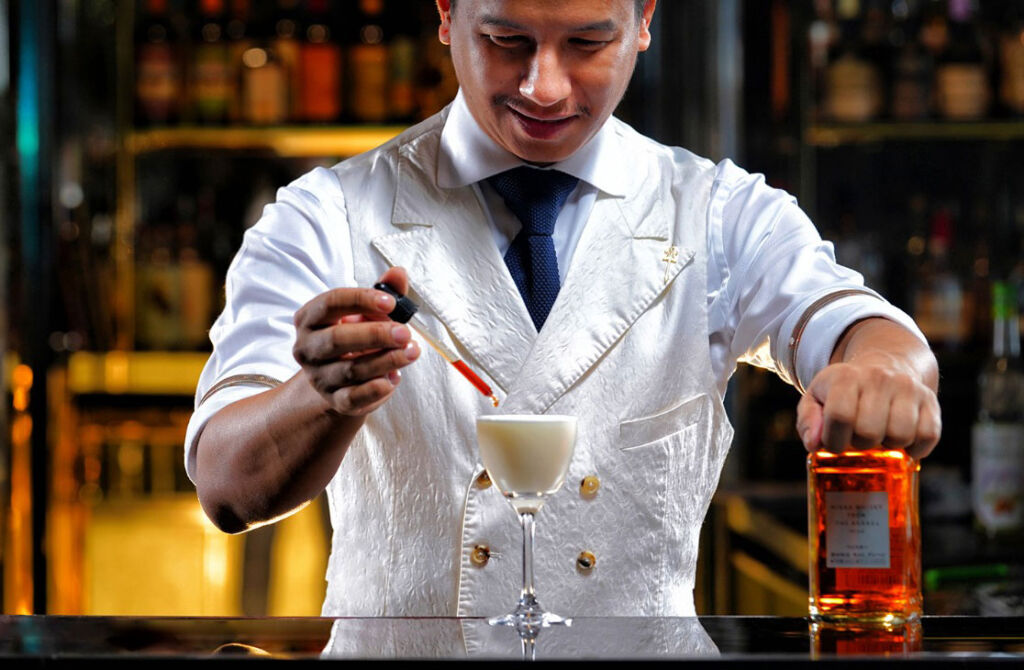 Cameron’s Kick is a classic cocktail said to have originated in Harry MacElhone’s Harry’s ABC of Mixing Cocktails, published in 1919. The highly refreshing and citrusy shaken drink exudes a strong almond flavour that blends perfectly with the “peatiness” of Nikka Whisky from the barrel. The cocktail is finished with a garnish of bitter embroidery art. 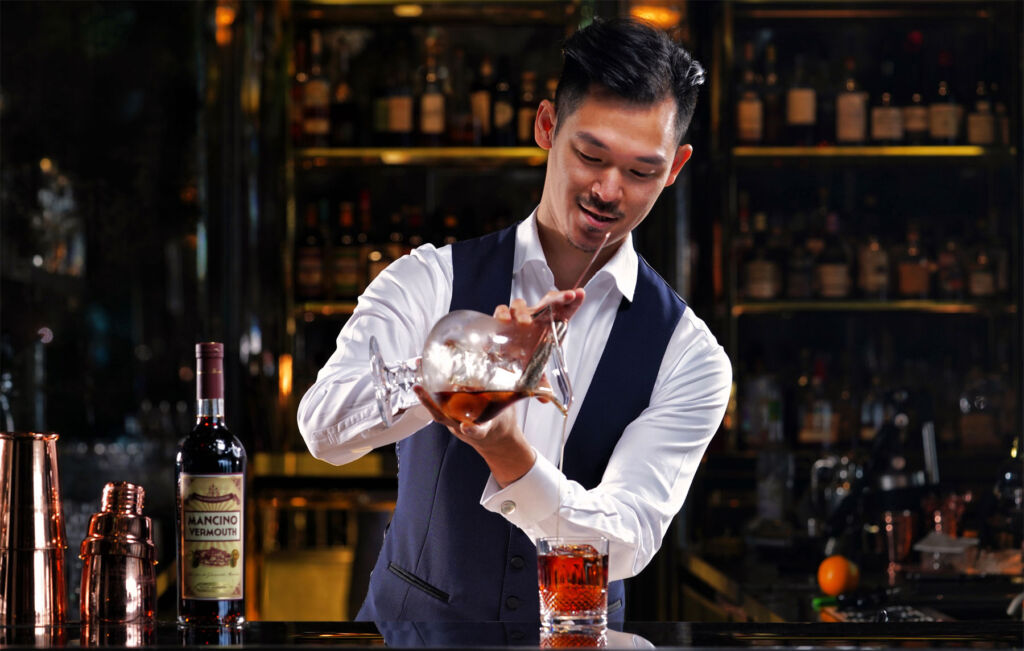 The history of Rabo de Galo (“rooster tail”) dates back to the 1950s, during the inauguration of the Cinzano Factory in São Paulo when the drink was popular among Italian immigrants. At the time, neat vermouth didn’t go down well with the Brazilians, and it was suggested that it should be mixed with cachaça, the locals’ favourite distilled spirit made from sugar cane juice.

DarkSide’s stirred version of the cocktail includes Germana Caetano’s cachaça, Mancino Rosso vermouth, cynar and bitters, which are pre-mixed and rested for two weeks to create an explosive harmony of flavours. 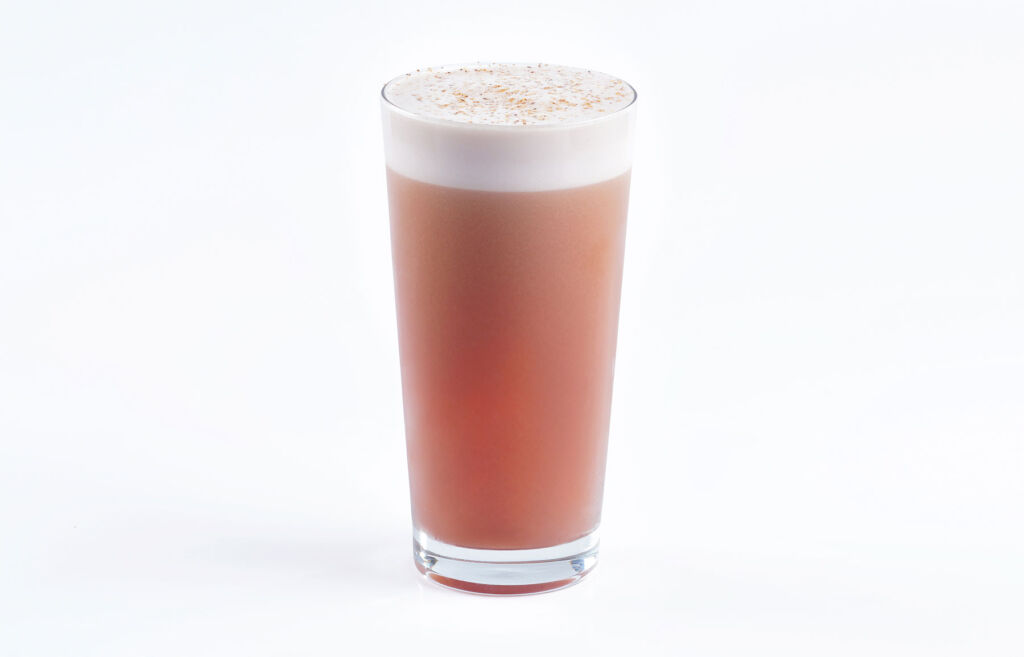 Popular back in its day, the Chicago Fizz was served at the city’s Waldorf Astoria hotel in the years leading up to Prohibition. Since then, it has fallen into obscurity however is well due for a revival, given the sophisticated and satisfying pairing of dark rum and ruby port. DarkSide uses Plantation dark original rum, Graham’s ruby port, lemon, creamy UHT egg white and a garnish of nutmeg dust that provides an extra layer of spiciness. 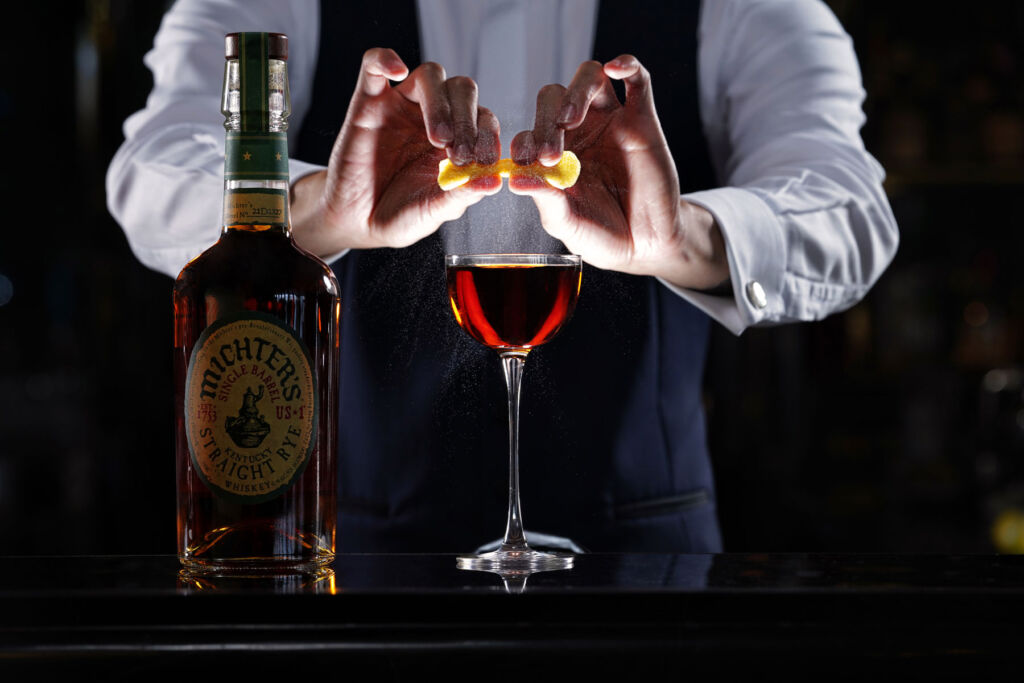 The house cocktail of the now defunct La Louisiane, a New Orleans institution famous for its fiery Cajun specialities, is the La Louisienne. It is a stirred rye whisky concoction whose recipe was originally printed in Stanley Clisby Arthur’s Famous New Orleans Drinks and How to Mix Them in 1937.

The lost New Orleans classic is the choice for any Manhattan cocktail and Vieux Carré lover and is perfect as an after-dinner libation. DarkSide combines Michter’s rye whisky with Mancino Rosso vermouth, with a fresh kick from absinthe, Benedictine and Peychaud’s bitters. 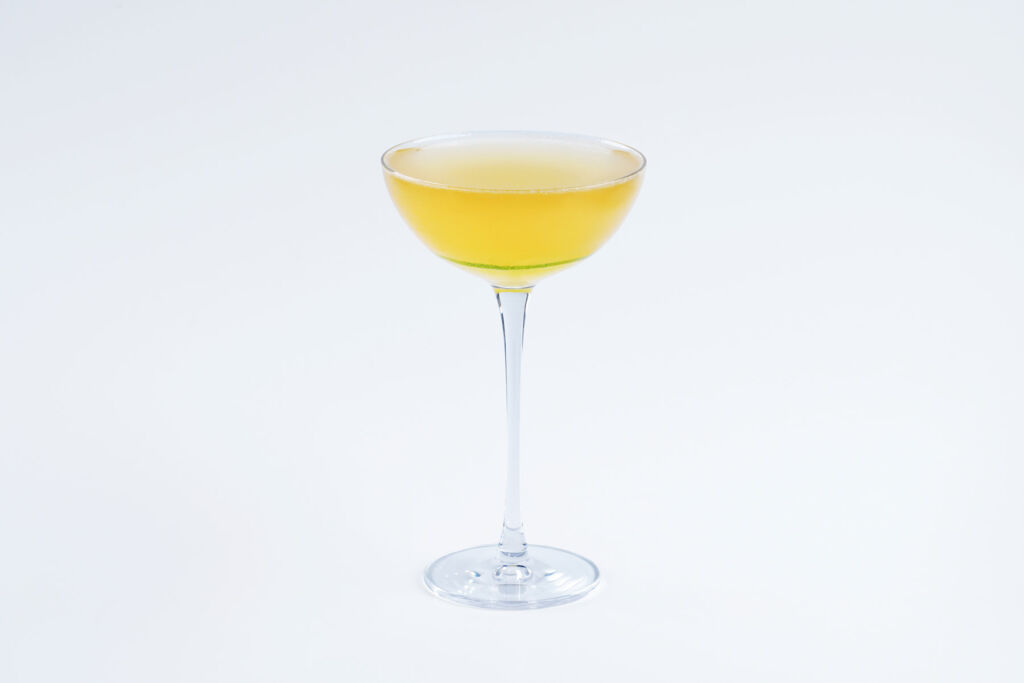 William J. Tarling first penned the recipe of Toreador – a refreshing shaken drink similar to Tommy’s Margarita – in his 1937 Café Royal Cocktail Book. At DarkSide, the cocktail is comprised of Ocho Blanco tequila, lime and undertones of ripe apricot.

All cocktails on the Modern Forgotten Classic Menu are priced at HKD170+10% service charge.