Fresh from the success of creating an eye-catching art installation seen around the world, young artist Alexander Hall has revealed his latest commission.

A new luxury hotel in the historic French city of Lyon is the setting for the latest ambitious project by upcoming British artist Alexander Hall.

Two of his eye-catching paintings have taken pride of place in the foyer of the InterContinental Lyon – Hotel Dieu, one of the city’s most iconic buildings.

The artwork was unveiled during a five-day celebration in September to mark the official opening of the opulent hotel following major renovation works.

And the London-based artist was at the five-star venue to talk about his work.

“It has been a really exciting commission and I couldn’t wait to see what they have done to the building and to see my own work in there,” he said. “I’ve only ever driven through Lyon before, so it was also a great chance to discover the city.”

The Hotel Dieu is housed within a former hospital, on the tree-lined banks of the River Rhône. A hospital has operated on the site since the 12th century, with the current building dating from the 18th century.

Its renovation has taken four years and has been the largest private transformation of a historic monument carried out in France to date.

Landing the high-profile double commission was a thrill for mixed-media artist Hall. He’s the founder of the fast-emerging creative brand Haut de Gamme – an appropriate name, as it is French for “upmarket” or “high-end”.

The 29-year-old came up with the idea for the hotel’s paintings after imagining opening a suitcase in a luxury hotel in a beautiful city and asking room service for a bottle of celebratory champagne. 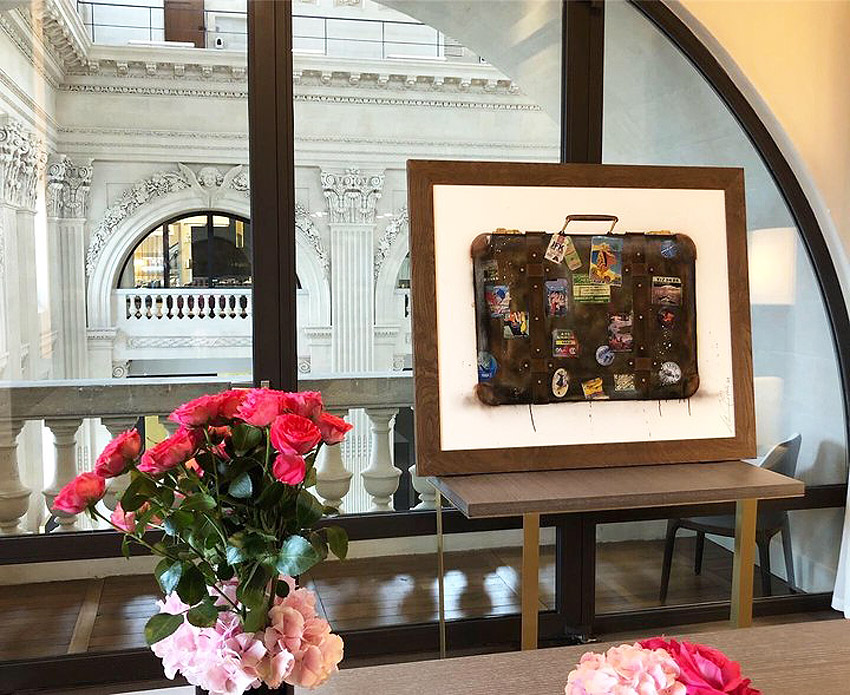 One of the paintings is a metaphor for exotic travel: an ancient leather suitcase, of the type usually found in attics but which can nowadays fetch a fair bit at bric-a-brac auctions.

The other is a symbol of celebration: a work featuring three bottles of champagne. Champagne bottles, splashed and dripping with paint, have become one of the artist’s signature images which have won him many fans.

The commission in Lyon, a city once described as the gastronomic capital of the world, came after he took on an ambitious project for InterContinental Hotels and Resorts.

He was asked to create a piece of work to mark the company’s 200th hotel acquisition last year.

His head-turning installation of 200 individually painted champagne bottles has been seen at InterContinental hotels around the world.

Hall travelled to Shanghai – the home of the new InterContinental Wonderland Hotel – where the installation was suspended from the ceiling. He continued on to Singapore, Dubai, Australia and the US to showcase and talk about the life-changing work.

“The paintings for Lyon are a spin-off from that commission,” Hall added, “so it’s been a chance to continue my work with InterContinental. 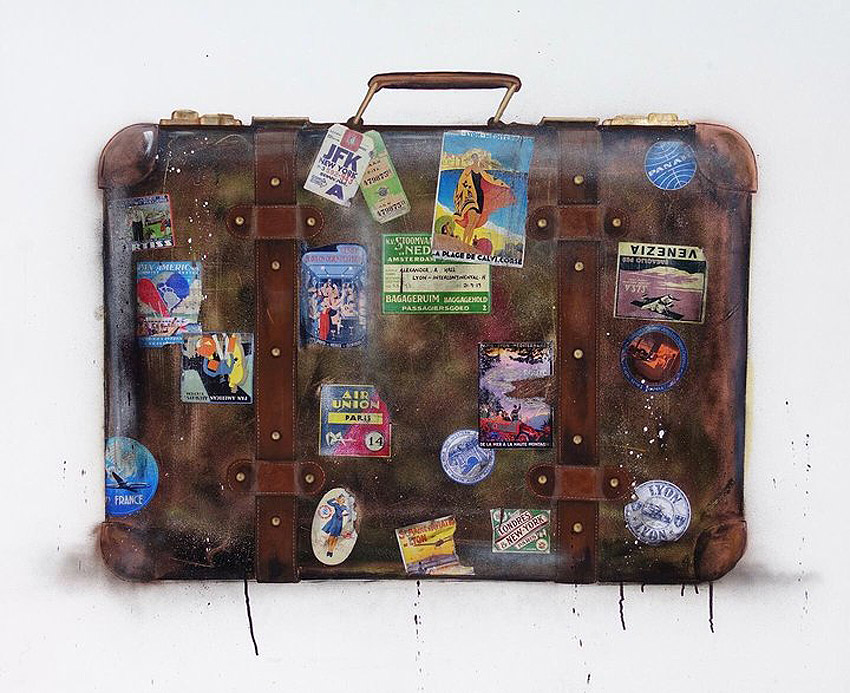 “I was inspired to take, as one of my subjects, an old-school leather 1940s suitcase as InterContinental was founded in 1946 by Juan Trippe. I used logos like Pan Am which the founder had previously worked at for example.

“I wanted something that would convey the romance of travel to faraway places; something that spoke of the things you expect to find when you go on holiday, and what you don’t expect.

“In the champagne triptych, the three bottles could represent breakfast, lunch and dinner.”

Hall worked on the paintings this summer. They are substantial pieces – one metre by one and a half metres. Fifteen limited-edition reproductions of the two originals were created and personalised individually as hand-finished prints, these were pre-sold to VIPs of the IGH brand.

Hall and other VIPs and guests at the event found themselves at one of the most historic hotel locations in France.

In medieval times, it was a resting place for beggars and Rome-bound pilgrims. The site served as a hospital for 800 years and the current building, more than 375 metres long, was started in the 18th century. The hospital closed in 2010 and, following a massive restoration project, opened this year.

Guests will find the lobby, and Hall’s paintings, under the building’s stunning Grand Dome, which stands 32 metres high. The hotel’s 143 beautifully designed rooms and suites occupy the eastern façade, with views across the Rhône.

For more about Alexander Hall and his work, visit www.hautdegamme.com

For more news and articles on Art, please click here.