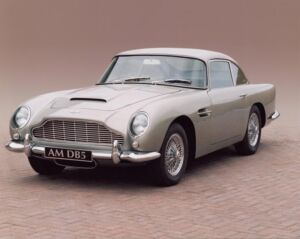 Perhaps the most famous Aston Martin because of the specially equipped silver birch DB5 that starred in the James Bond films “Goldfinger” and “Thunderball”. The DB5 made a comeback to the big screen in the 1995 film “GoldenEye”.

Regarded by many as the most beautiful Aston Martin produced, DB5 shares many similar traits to DB4. However, DB5’s most substantial change occurred under the bonnet. The 6 cylinder engine increased its capacity to 4 litres by increasing the bore to 96mm. Significant too was the introduction of a true full synchromesh ZF 5 speed gearbox. Other chassis changes included the adoption of the Girling disc brakes that had only been used on the DB4GT, and 15” wheels.

A convertible was also offered and was available with a steel hard top with an exceptionally large rear window.