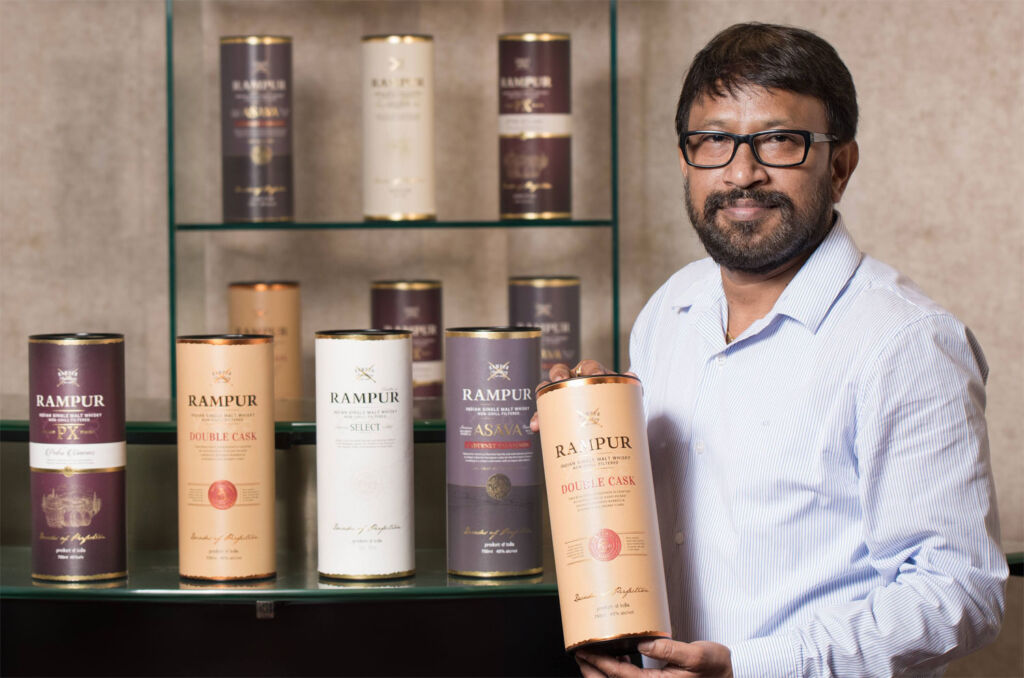 You may not have heard of Rampur, as it tends to be overshadowed by the more famous names emanating from Speyside, Japan and Ireland. It is a brand of single malt whisky produced by Radico Khaitan (previously known as the Rampur Distillery & Chemical Company Limited) in the foothills of the Himalayas.

The parent company was founded in 1943 and has become one of the country’s biggest producers of alcohol, making 13 million litres every month, which includes craft gin, vodka and rum. 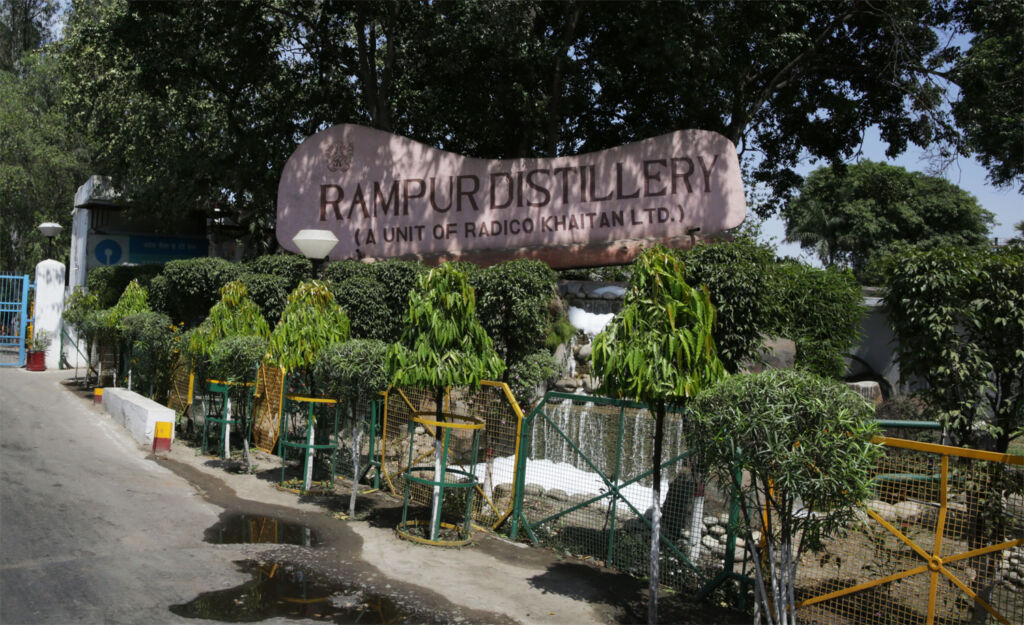 The business only started distilling single malts 27 years ago and, because of the location of Rampur at the base of an iconic mountain range, they have the privilege of using the Himalayan groundwater, soil and air, which all add to the unique qualities found in its expressions. Being based in northern India, there is the added challenge of the climate, which sees the mercury fall to two degrees centigrade in the winter, whilst rising to 42C in the summer months.

With the wide fluctuations in temperature, the ageing of whisky is three to four times faster in India than it is in Scotland, and there is also the added factor of a rather large and expensive angel’s share, with 13% of production evaporating each year. 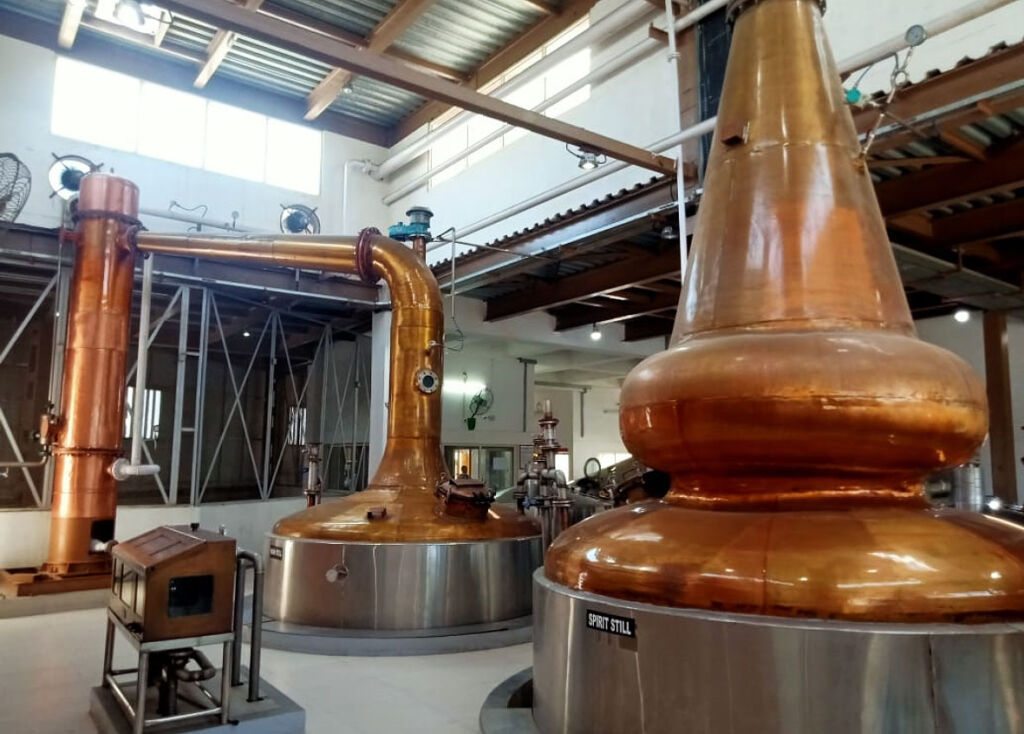 There was never any sense of urgency to bottle the single malts. Hence no products were released by the distillery for around a quarter of a century. In November 2015, Anup offered his colleagues a taste of what was to be the first Rampur single malt. After a resounding seal of approval, the business launched Rampur Select in April 2016, carrying a logo featuring two swords which are shown on the flag of the State of Rampur.

Fast forward a few years, and Rampur whisky can be found in nearly 50 countries worldwide, with the USA being a key market for the relatively young distillery.

This exclusive masterclass was a chance to sample four non-chill filtered expressions, which Anup, who comes from a family of highly experienced distillers and master blenders, has distilled and aged since arriving at the distillery in 1994. He’s also the man responsible for checking the quality of every single cask, as any defective wood can have a significant impact on the whisky.

The expression that we didn’t get to try is the “ultra-exclusive” £900 Rampur Signature Reserve, the “crown of the collection”, and one of the oldest single malts in India, where only 400 bottles have been made worldwide, of which nearly 350 have been sold already.

Rampur has its own personality thanks to its geographical location, and uses a unique combination of three different types of yeast, contributing to a fruity character. They also have their own distillation style thanks to the use of a smaller wash still and larger spirit stills, so they take two batches of wash still, and distil one batch of spirit still. 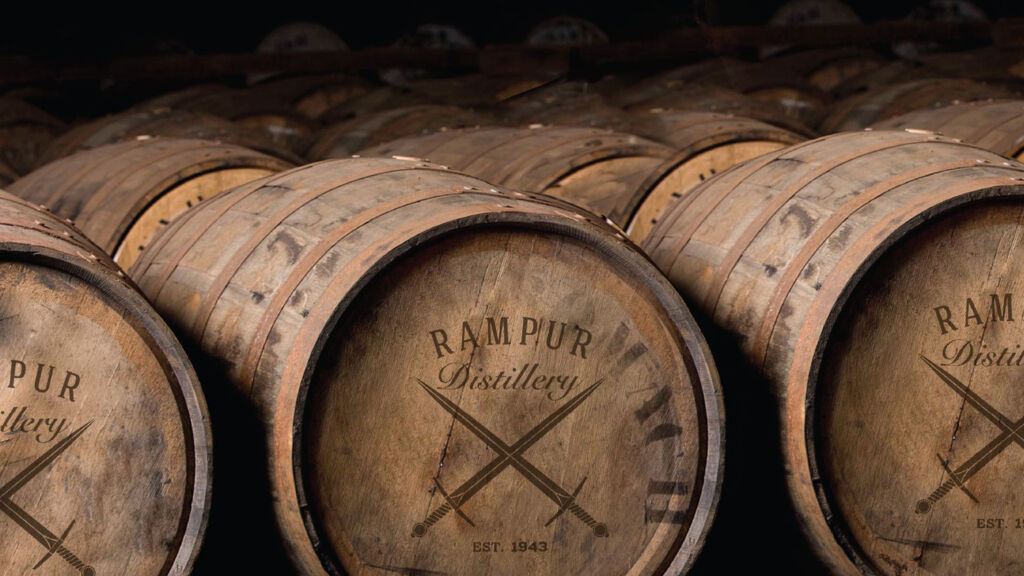 At only 4.5 litres per minute, the distillation process is extremely slow compared to that used by other whisky producers around the world, and the idea behind it is to retain the aromas during the fermentation process.

Because of the more rapid ageing process in India, Rampur’s expressions do not have an age statement as you would find with other distilleries. They, therefore, see age as just a number, and what is more important for them, is how the whisky tastes on the drinker’s palate. If the consumer then has it more than once, this is classed as success in their books, and it’s a good enough endorsement of the quality of Rampur. In fact, many of the new world malts are being released without an age statement. 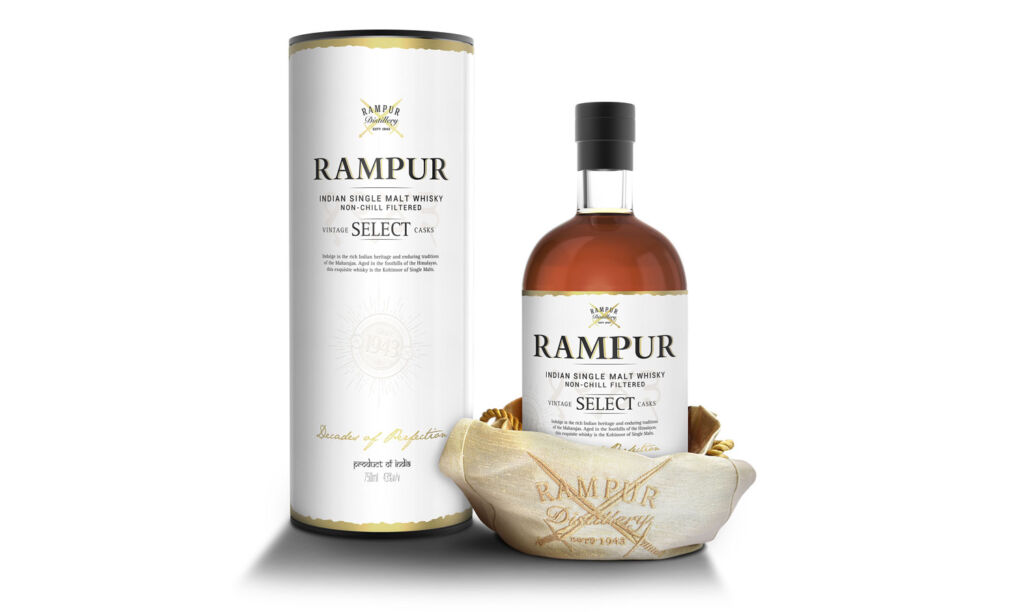 Rampur Select (43% ABV / £49.95)
Rampur Select has a beautiful golden colour, and the first note is tropical fruits, such as lychee (which has a similar top note to rose) – typical of Rampur, which is followed by hints of apple and creamy vanilla due to the Bourbon casks. The initial taste is sweet, is easy to drink and has a comparatively long finish. Anup Barik describes it as “the complete package from India”.

For Rampur Select, there’s a dash of caramel that’s been added for colour consistency, but is the only expression in the Rampur line-up where this is the case. 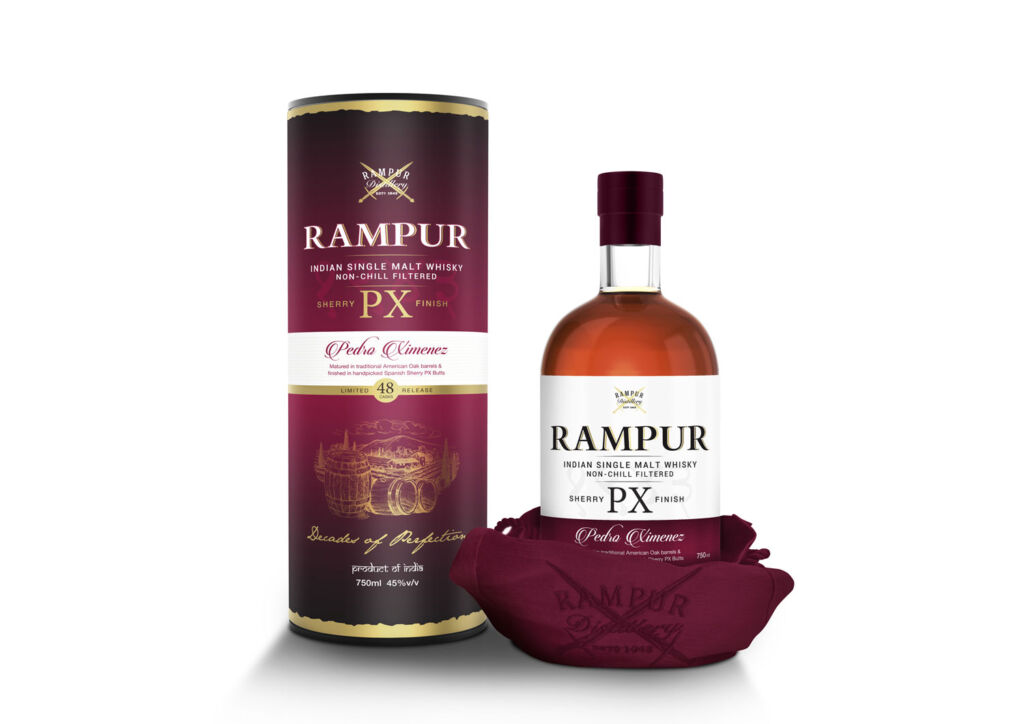 Rampur PX Sherry Cask (45% / £68.95)
According to Rampur, people in India are known for having a sweet tooth, so for this expression, Anup and his team travelled to Jerez in Spain to source 25-year-old Spanish oak casks used for Pedro Ximénez (PX) Sherry, and shipped them to India. After being matured in American oak casks, Rampur PX, which is a little darker than Rampur Select, was then finished in the PX Sherry casks for eight to nine months. Anup wanted to retain the Sherry influence, but not make it too overpowering or the whisky too sweet or sulphury.

This expression has spiciness from the wood, hints of mango and dried fruits, such as prune, and there is a beautiful balance between fruity and sweet, which comes through on the palate. The finish is once again long, with a honey aftertaste. Rampur PX, which was unveiled in 2017, is actually a limited edition, and there is no word as yet from the distillery as to whether any new batches will be produced. 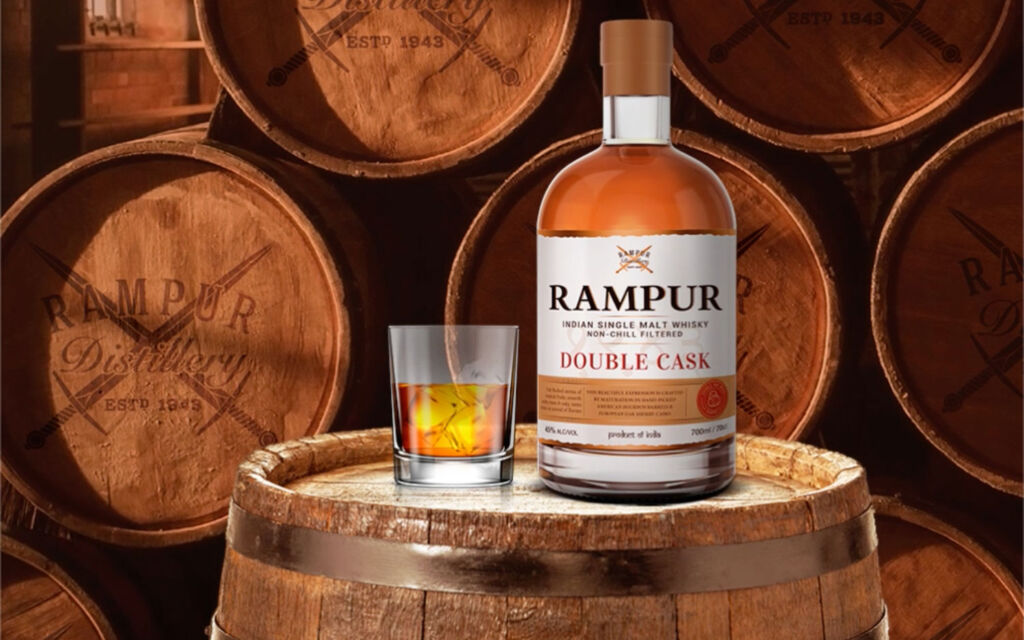 Rampur Double Cask (45% ABV / £60)
Rampur Double Cask, which came out in 2018, has spent two-thirds of its life maturing in hand-selected American oak barrels, and the other one-third lying in Oloroso Sherry casks. Due to the use of European oak, this whisky, which boasts a natural colour, has light reddish tints but is darker than Rampur Select.

The Sherry provides a sweet element but is not overpowering, and this smooth expression has got less of a rose and lychee-type character compared to others in the range. There’s also a hint of creamy vanilla on the palate from the Bourbon casks. The finish is tantalisingly long, lingering and generous. 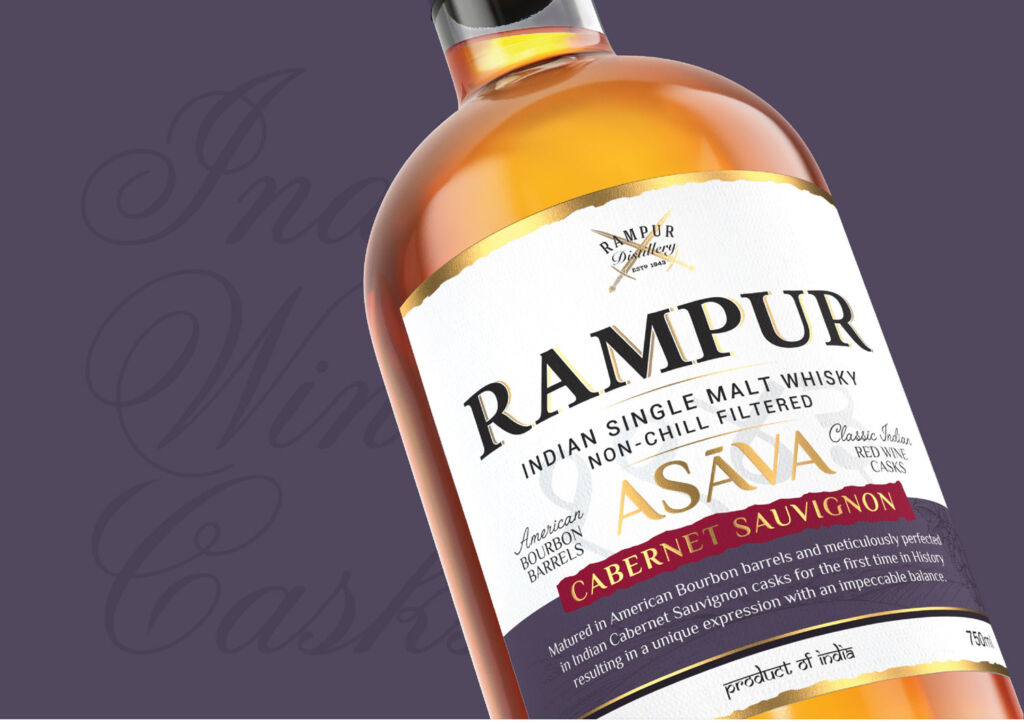 Rampur Asava (45% ABV / £68.95)
Launched on 1st October 2020 at the virtual London Whisky Show, Asava is the world’s first Indian single malt whisky to be finished in Indian Cabernet Sauvignon wine casks sourced from a good friend of Anup in Maharashtra, western India. Bottled at 45% ABV, it has been aged in American Bourbon barrels and has dashes of tobacco and spice. A rush of aromas fills your mouth, including dark chilli, dried plum and citrus. A medium to long finish rounds off this superb whisky.

My first foray into Indian whisky with Rampur was a highly enjoyable and enlightening experience and is one that whisky connoisseurs should try if they haven’t done so already.

Rampur single malt whisky – Where and How?

Read more articles on spirits and wines in our dedicated section here.