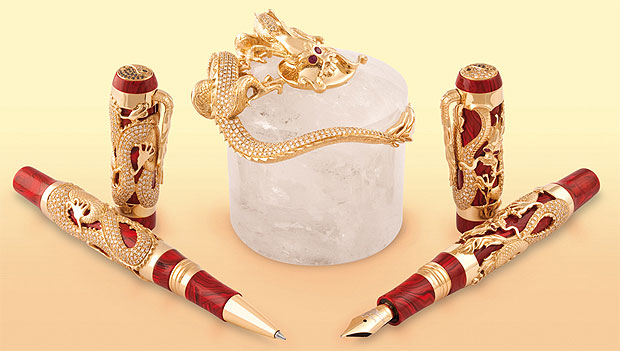 As we look back at 100 years of beautiful writing implements from the master craftsmen at Montegrappa, we are reminded of the events, the individuals and the projects that have marked the history of Montegrappa. During this period of reflection, we also acknowledge how the Number 12 looms large in the history of Montegrappa. The company was founded in 1912, and that number has been incorporated into their logo, into a line of pens, into their ethos. 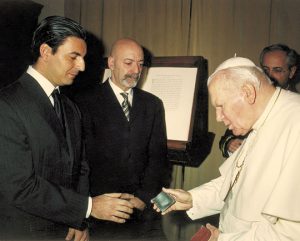 And so it is, with both humility and reverence that they enter 2012 – the year of their centenary. Significantly, 2012 is the Year of the Dragon – both for the Chinese calendar and for the rebirth of one of their most beloved pens. Coincidence upon coincidence: 1912 was also the year that Imperial China was abolished. The Dragon was the symbol of the last Emperor of China. The importance of the Number “12”, of the Dragon itself – such forces and influences have come together to mark what should prove to be a most momentous period for Italy’s oldest manufacturer of artisan-quality writing implements. 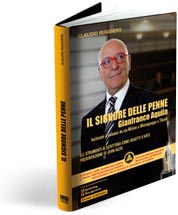 In the months leading up to 2012, Montegrappa published their long-awaited ll Signore delle Penne (The Lord of the Pens), the biography of Gianfranco Aquila, President of Montegrappa and Tibaldi. Written by Claudio Ruggiero, it outlined the profile of the man, from his boyhood right up to old age, at the helm – together with his children – of Montegrappa and Tibaldi, Italy’s two oldest pen manufacturers, currently owned by the Aquila family.

Also setting the stage for a momentous year was the release of Sylvester Stallone’s incredible pen, Chaos, and their tribute to Frank Sinatra. They lost a friend in Joe Frazier, but were grateful that he lived to see the Montegrappa pens that commemorate his epic battle with Muhammad Ali. And they are – especially in light of the year they have just entered – proud to have re-introduced one of the most highly coveted pens in out 100-year history: the Dragon.

Inspired both by the relevance to 2012, and their homage to the iconic film star and martial arts legend Bruce Lee, their craftsmen and women revised the Dragon, over a decade-and-a-half after its original appearance. It was with this pen, used as a testimonial of power, that the documents were signed during the handover of Russia’s leadership from Boris Yeltsin to Vladimir Putin on January 2nd, 2000. 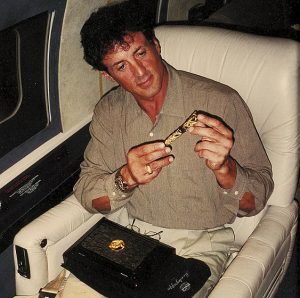 The Dragon also played a key role in forging an enduring friendship between Montegrappa and actor/director/artist Sylvester Stallone. When his original Dragon pen was misplaced, we provided him with the remaining example – the prototype. A respected pen collector, Sly has joined the Montegrappa family, the first fruits being the aforementioned Chaos. A further reassessment of the importance of the Dragon in Chinese culture proved to be supremely timely and appropriate. The Dragon is one of the 12-year cycle of animals which appear in the Chinese zodiac, the only animal that is legendary rather than of this earth. A creature of mythical strength, the Dragon is regarded in Chinese culture as a divine beast that delivers good fortune, in direct contrast to its fearsome image in the West.

Because of the power and spirit of the Dragon, those born in the Year of the Dragon are widely honoured and respected, regarded as thinkers, dreamers and innovators who often shun conformity, rules and regulations. People born in the Year of Dragon reflect the strengths of this magical creature: confidence, energy and spirit. They tend to be ‘larger than life’ in thought and deed, precisely as embodied by Bruce Lee. This grandeur has been captured in the Montegrappa Dragon pen collection.

As Montegrappa enter 2012, they would like to thank all of their friends and colleagues for the support they have shown as Montegrappa enters its second century. The coming year will be full of surprises, and will be marked by a unique symbol: The 100 Years logo. This logo will appear on all limited editions to be released in 2012, making such products all the more special and collectible. Given the importance of the Dragon in our history and – as 2012 is the Year of the Dragon – the Montegrappa designers have incorporated a dragon into the logo. Another powerful creature dear to Montegrappa is the eagle, the symbol of the Aquila family, for “Aquila” is Italian for “eagle”. This, too, will appear in the logo.

To launch the limited editions in a milestone year, they will first release The Alchemist Pen, developed in collaboration with Brazilian writer, Paulo Coelho, and inspired by his renowned best-seller of the same name. It has sold over 65 million copies in more than 150 countries, thus becoming one of the best-selling books in history.

Thank you Montegrappa for 100 years of stunning writing implements and for creating some of history’s most beautiful pens.