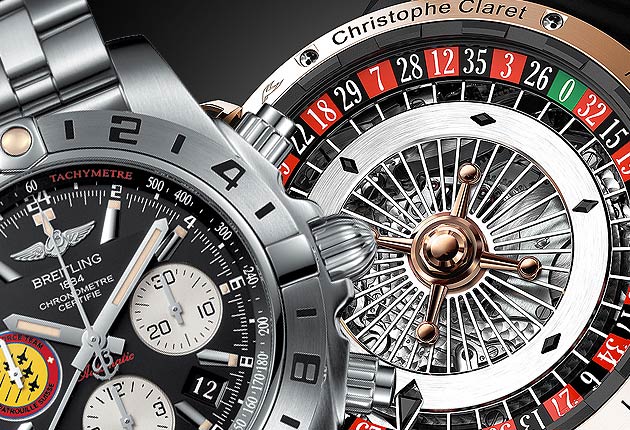 To us at Luxurious Magazine, the word Baselworld conjurs up excitement and an opportunity to see the latest and greatest watches and jewellery pieces from the industry’s best brands.

(Shown above and to be featured at a later date are the Breitling Chronomat 44 GMT “50th Anniversary Patrouille Suisse” 2014 and the Christophe Claret Poker.)
For those that are not familiar with Baselworld, allow us to explain what it is before showing you this weeks showcase of the excellent pieces for the gents. Baselworld is the most important event in the watch and jewellery industry and will open in Basel, Switzerland on the 27th March. It is an annual showcase of the very best and attracts over 150,000 visitors and over 3,500 media representatives from around the world. The exhibition takes places within what can best be described as a temporary town that is crafted and assembled by almost 20,000 people in just two months. Unfortunately for many of you, unless you a member of the media or involved in the industry, you’ll probably not be able to attend as it is essentially a business to business show.

However, there is no need to worry as Luxurious Magazine will be showing the very best pieces over the next few weeks.

(1). TNT Royal Retro 43 from Pierre DeRoche
Pierre DeRoche, the Vallée de Joux watchmakers have introduced a new smaller version of the TNT Royal Retro five years after the brand was created. The founders, Pierre and Carole Dubois, hail from a watchmaking dynasty that spans four generations, and they have used this extensive expertise in this latest creation. In the TNT Royal Retro 43 we find the same complications, the same personality with nerves of steel, but new measurements, smaller, more discreet perfect for those with thinner wrists. The new TNT Royal Retro loses a little more than 4 mm off the width, but not enough to offload its streamlined look.

(2). The Arnold & Son Time Pyramid
Although this article is primarily centred around Switzerland and the series of Baselworld watch articles we will be running will concentrate in the main on Swiss brands, it must be said that with regards to Arnold & Son, the company founder John Arnold was born in Cornwall in 1736 making him a Brit! The Time Pyramid is one of those watches that stands aside the line between horology and art, it’s an extraordinary piece that has exquisite vertical elements and three-dimensional effects in a skeletonised movement. The inspiration for this watch came from the design of 19th century English clocks. The amazing movement was built and designed by the watchmakers at Arnold & Son and has two power reserve indicators for an individual display of the autonomy of each of the two barrels.

(3). Chrono 4 from Eberhard & Co
The Chrono 4 this year has an even more sporting style housed within its 40mm steel case. The black counters creating a tone-on-tone effect with the dial are lit up by contrasting silver-toned rings echoed by the Arabic numerals that stand out against the hollowed luminescent studs. The chronograph sweep seconds hand lends a very dynamic touch of red also featured on the 24-hour counter hand.