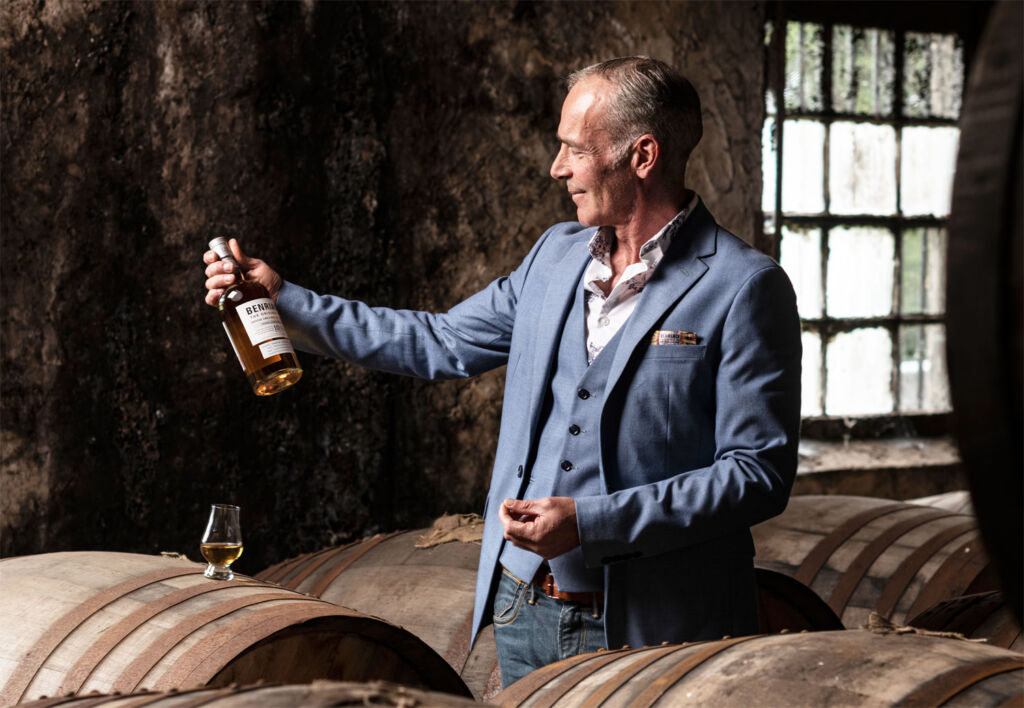 Overview
Benriach, also referred to as BenRiach, is a whisky distillery situated in the northern Speyside area of Scotland, and takes its name from the Gaelic words for “speckled mountain”. The single malt producer was founded in 1898 by John Duff, but its fortunes were short-lived. Multiple owners have ensued since then, starting with the Longmorn Distilleries Company, that actually closed it down.

It was later revived by The Glenlivet Distillers in the 1960s and, after another closure in 2001 by Seagrams, South Africa’s Infra Trading re-opened Benriach in 2004, and followed this up with the acquisition of Glendronach from Chivas in 2008, and Glenglassaugh nine years’ later. 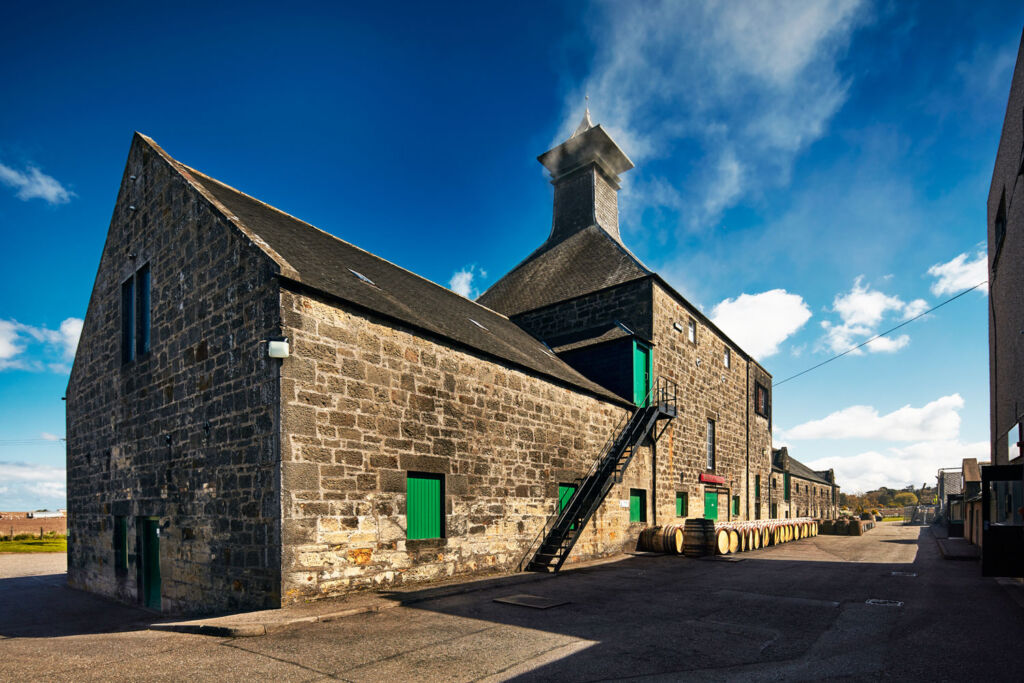 Today, it’s owned by Brown-Forman, the US makers of Jack Daniel’s after purchasing the Benriach Distilling Co for nearly £300 million in 2016. It is one of only two Speyside distilleries that uses malted barley from its own on-site floor maltings, and it has become renowned for its long-standing tradition of producing classic, peated and triple-distilled whisky. 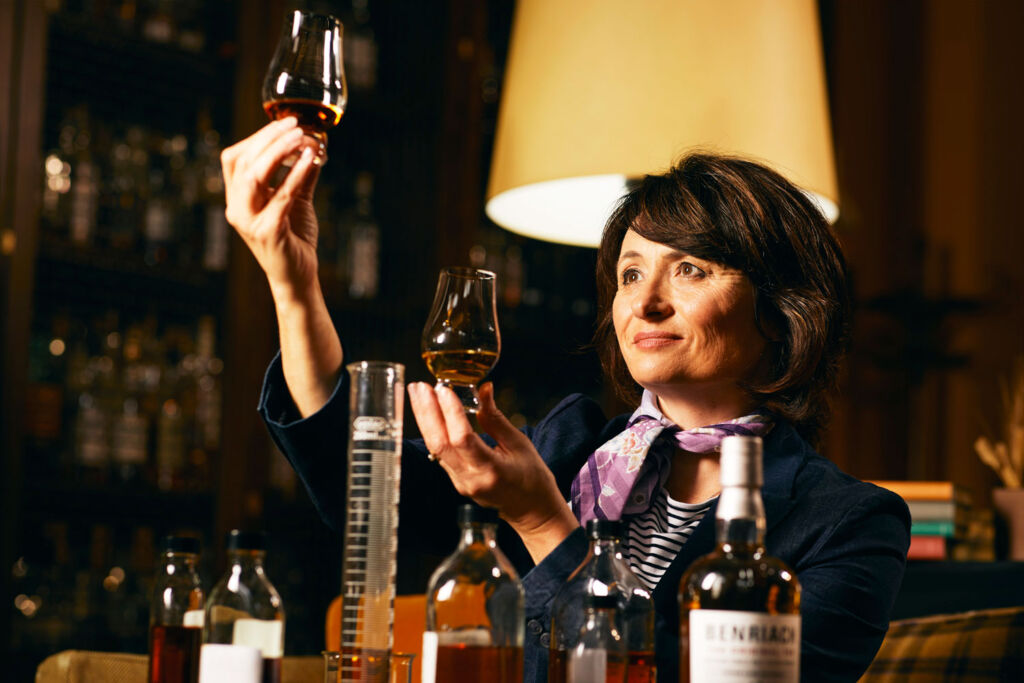 The line-up, which spans the full spectrum of flavour, has been artistically crafted by Master Blender Dr. Rachel Barrie, after being given the creative freedom to go into Warehouse 13 to sample the contents housed in different casks, which span rum, bourbon and sherry, to virgin oak, marsala, port and red wine. This allowed her to explore the flavours and bring the new portfolio to life.

The look of the new packaging is inspired by Benriach’s history as a single malt and the original 10-year-old bottling from 1994. The design, therefore, has a few historical cues, and the colour scheme, which counts blues and earthy tones, reflects shades found in Speyside, but also helps the consumer to navigate their way through the portfolio, and from the classic unpeated expressions to the more smoky whiskies. 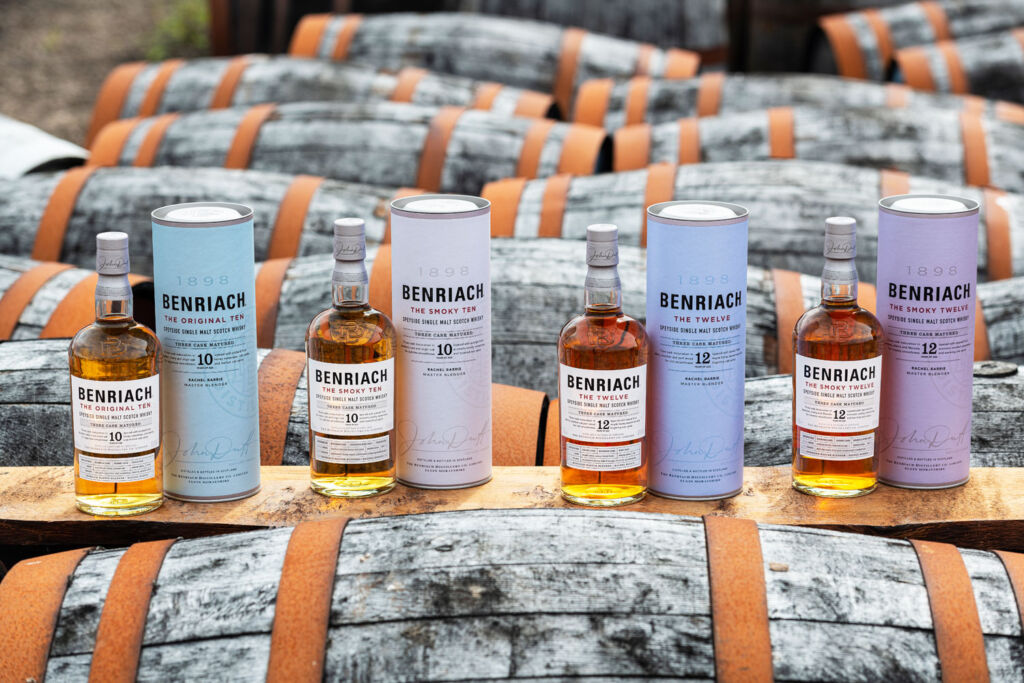 The core expressions
More readily available to buyers, the core range is made up of four different expressions from a three-cask maturation process, i.e. two ten-year-olds, and two twelve-year-olds. The line-up starts with the new signature smooth and multi-layered Original Ten (£43 / 43% ABV), which boasts a richer flavour profile than the previous 10-year-old and a rounded malt character. In fact, Dr Barrie describes it as a “Speyside Patisserie”, thanks to the different layers and a “mouthful of deliciousness”.

It delivers vanilla and honey on the middle of the palate and a burst of orchard fruit. There’s also some spice from the oloroso, and a little thread of peat to round off the profile. For a bit of trivia, the name “Original” was also chosen for this expression, because it takes characteristics from Benriach’s old 1994 whisky. 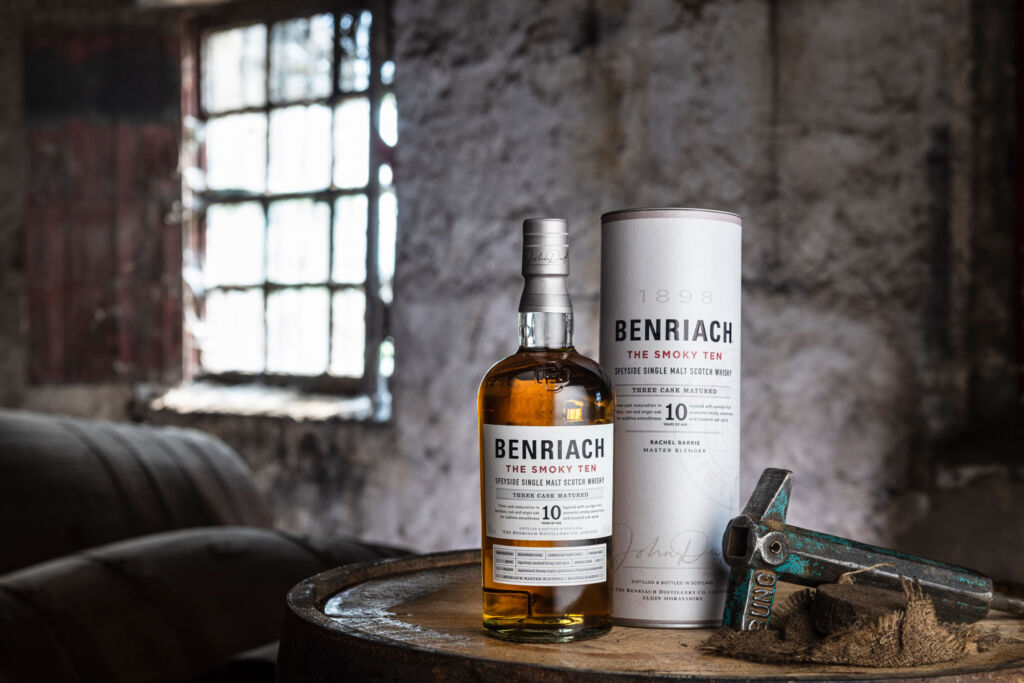 The Original Ten is followed by the new Smoky Ten (£42 / 46% ABV), which is an evolution of Benriach’s Curiositas. This very popular 10-year-old peated malt has been one of the distillery’s most iconic expressions since day one. For the Smoky Ten, bourbon is the backbone, with Jamaican rum barrels providing the spectrum of fruit, and the toasted and charred American virgin oak dialling up the smoke.

Next in the range is The Twelve (£44 / 46% ABV), which has a deeper colour than the ten-year-old, almost an antique copper hue like Benriach’s pear-shaped stills. There’s a sherry cask dominance for the base, whilst a layer of bourbon provides the top notes (i.e. freshness and elegance). The ruby port pipes bring the luscious fruit spectrum into a different dimension, with Dr. Barrie summing up the Twelve nicely as “a cornucopia of a fruit basket in front of you”. 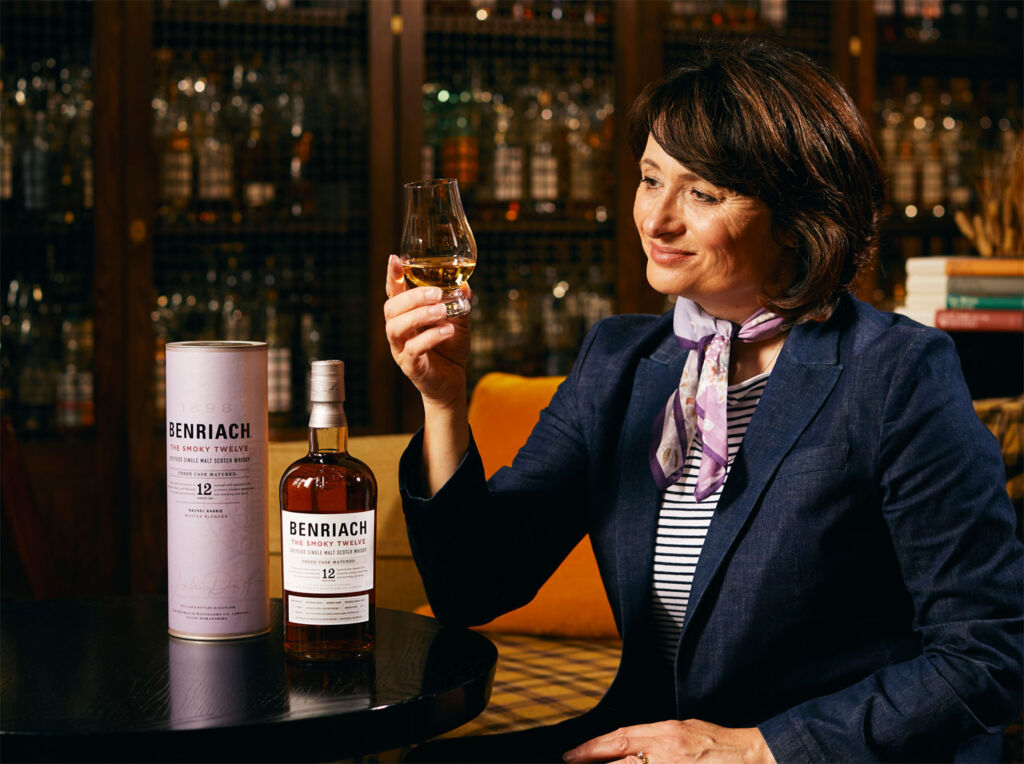 The final expression in the core category of the portfolio is the Smoky Twelve (£48 / 46% ABV) and is ideal for those who like rich smokiness. Rachel Barrie explained that her love for cooking and Italian food was going through her head when creating this whisky. This is because she had a lot of casks to choose from and a complete creative licence to explore the flavours. The Smoky Twelve has been matured in bourbon, sherry and marsala wine casks for creamy smoothness.

It has a bright colour with a sweetness of smoke on the nose, whilst milk chocolate and seared orange peel also come to the fore. The taste is an intense explosion of flavour, featuring fruit, spice and a hint of pepper. This is complemented by a long-lasting finish. 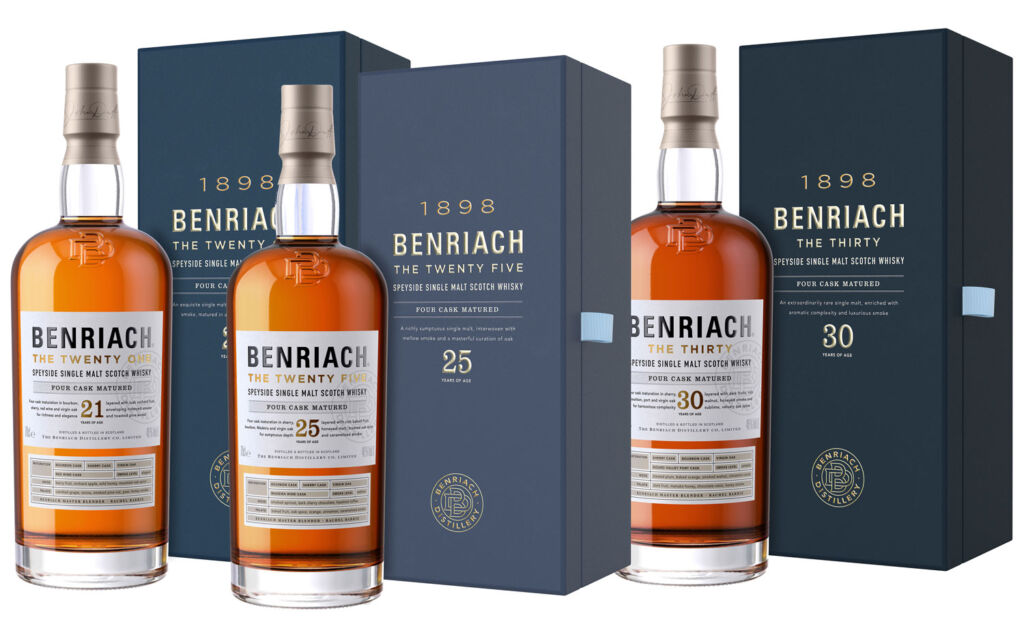 Rare and luxurious single malts
The more exclusive Twenty One (£145 / 46% ABV), Twenty Five (£325 / 46% ABV) and The Thirty (£650 / 46% ABV), which are defined by luxurious deep blue packaging, have resulted from decades of maturation and the extremely limited volumes are yet to be revealed.

The 21-year-old is described by Benriach as “an exquisite single malt with layers of elegant honeyed smoke”, and is the result of being laid down in four separate casks namely, aged bourbon, sherry, virgin oak and red wine. The 25-year-old gives off a mellow caramelised smoke character and will appeal principally to lovers of rich sherry cask whisky.

The 30-year-old, which spearheads the refreshed portfolio, is pitched in the blurb as “an extraordinarily rare single malt layered with luxurious smoke”. Dr. Barrie has crafted this expression using 100% peated spirit, making it an extraordinarily rare single malt that’s worth taking your time over, as it’s one of the only peated Speyside malts available at this age. 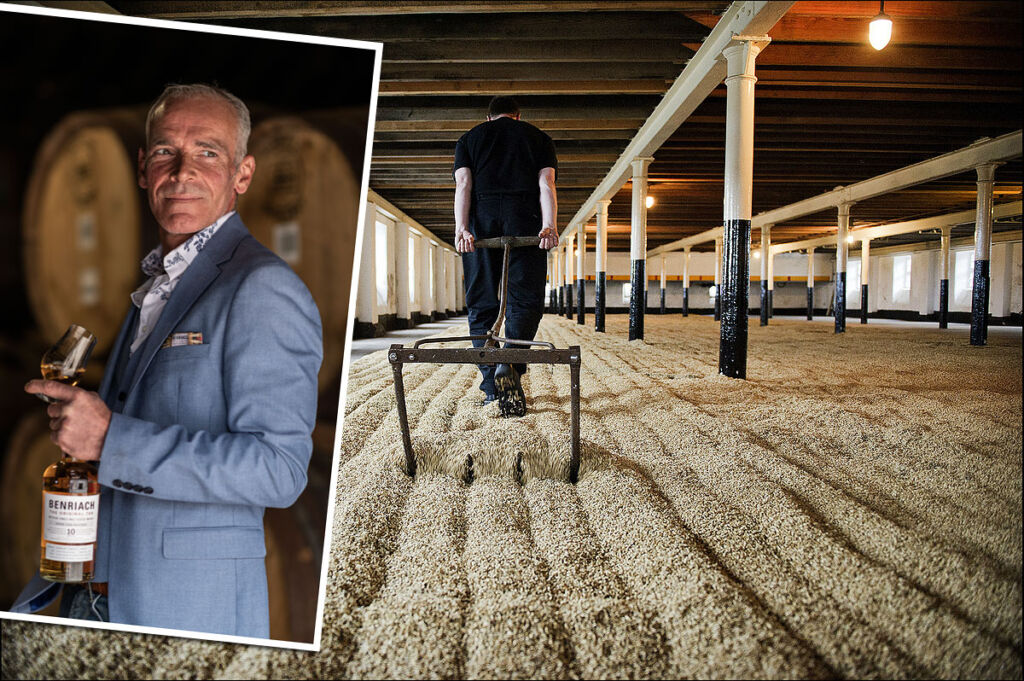 The distillery will equally maintain its legacy of capturing unique moments in time through its Cask Edition Programme and will continue to offer a travel retail collection featuring the Triple Distilled aged ten years, as well as Quarter Cask and Smoky Quarter Cask single malts.

The other cause for celebration is that the Benriach distillery is looking to open its first official visitor centre, which will allow individuals to delve behind the scenes of one of Speyside’s gems.

Benriach – Where and How?

For more information on Benriach’s new range of single malt whiskies, which are now available across global markets, visit www.benriachdistillery.com.

Read more features and articles on wines and spirits in our dedicated section here.