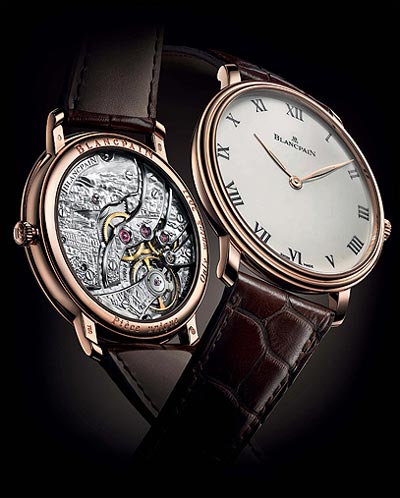 About Blancpain
Blancpain is a luxury Swiss watch manufacturer, founded in 1735 by Jehan-Jaques Blancpain. Blancpain went into bankruptcy and stopped production for a long period but was saved by Jean-Claude Biver, an executive with Omega. Blancpain is owned by the Swatch Group. Since 2002, Marc Hayek, the grandson of The Swatch Group’s founder and chairman, Nicolas Hayek runs the company. Blancpain started making watches in 1735 in Villeret, Switzerland. According to their commercial slogans, the company has never produced quartz watches in the past and has stated in its advertisements that it never will, nor have they ever produced watches with digital displays. In comparison to a large watch maker like Rolex, which makes about 2,000 watches a day, Blancpain produces fewer than 10,000 watches a year. Each watch is made by a single watchmaker. Blancpain is also famous for being the creator of one of the most complicated mechanical watches ever made, the Blancpain 1735, which is a true grand complication (Tourbillon, minute repeater, perpetual calendar, split chrono), a limited edition of 30 pieces only, production of just one piece per year.