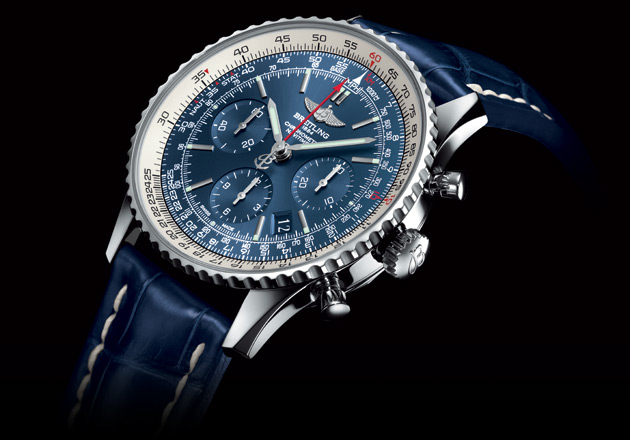 To mark the 60th anniversary of the Navitimer chronograph, the cult model among pilots and aviation enthusiasts, Breitling is introducing a 500-piece limited edition with an elegant dial in an exclusive shade of blue and aptly named the Navitimer Blue Sky. 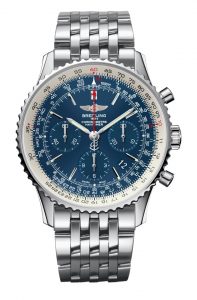 In 1952, Breitling – already a firm fixture among aeronautical professionals – decided to create a new “wrist instrument” specifically designed with aviators in mind. The result was the Navitimer with its famous circular slide rule providing simple and fast handling of all calculations relating to airborne navigation: an authentic wristworn instrument panel. In an era preceding the advent of electronic calculators, this model unique in its kind was soon adopted by many pilots for flight preparation and monitoring – whether it came to calculating average speed, distance covered, fuel consumption or rates of ascent and descent.

The only authentic aviation chronograph in widespread use, it was naturally chosen as the official watch by the Aircraft Owners and Pilots Association, the largest of its kind in the world and of which the logo often appears on models from the 1950s and 1960s. The Navitimer features a functional design and a highly original technical yet elegant look that is recognizable at first glance. It thus established itself as one of the ten great 20th century watchmaking classics, a timeless benchmark in its field and a reliable value. Continuously made since 1952, while remaining loyal to the aesthetic of the original, it is the world’s oldest mechanical chronograph still in production.

To celebrate its 60 years in flight, the favorite watch among aviation enthusiasts is now available in a 500-piece steel limited edition with a magnificent blue dial, a silver inner bezel and a red central chronograph seconds hand. A handsomely stylish new face for the most emblematic Breitling model. A transparent caseback affords a chance to admire Manufacture Breitling Caliber 01, the best selfwinding chronograph movement. The series number is engraved on the case middle at 9 o’clock, and the color match is reinforced by an exclusive dark blue crocodile leather strap. The Navitimer Blue Sky Limited Edition 60th anniversary is also available on the Navitimer bracelet – or the highly original perforated Air Racer bracelet.

Breitling Navitimer: the legend lives on.