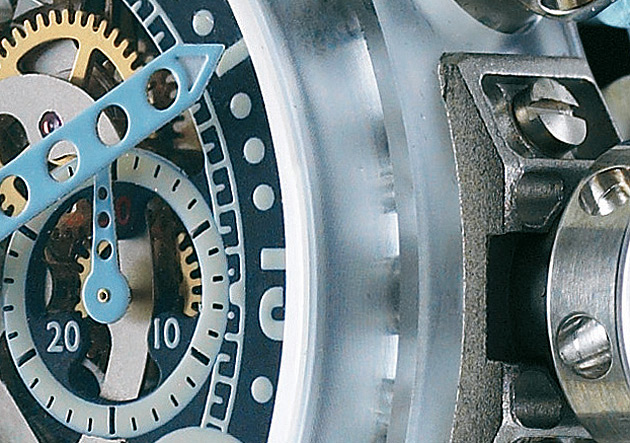 It took BRM (Bernard Richards Manufacture) more than two years to reach the impossible goal of creating a chronograph weighing less than 50 grams without sacrificing the reliability required of a BRM timepiece. The first champion to put the BRM MK-44 to the test was French racing driver Emmanuel Collard a member of the Porsche Junioren factory team, who took the extra-light chronograph for a ride in 2011 at the legendary 24 Hours of Le Mans. Since then, this incredibly light watch has become the favourite of more than a few top endurance drivers.

Weight reduction plays a major role in BRM’s technological achievement. Operating with the precision of a Formula One team, the BRM engineers have eliminated every bit of extraneous weight in the design and manufacture of the MK-44, using micrometric scales to enhance precision and efficiency.

Pushing the boundaries of the BRM MK-44 Watch even further 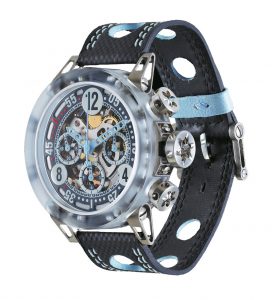 The case is created in Makrolon®, the extra-light material used for the side windows in the most advanced race cars. The back is made of Fortal® HR, an extra-light aluminum alloy that is frequently employed in motorsports. To reduce the weight even further, the titanium fastenings have been made hollow, while the sapphire glass has been reduced from 1.5 to only 1 millimeter in thickness.

The movement of the BRM MK-44 is lighter than ever, and every part has been streamlined. The rotor is just half the weight of that used in a regular movement, thanks to the optimized performance of the movement as a whole. Both titanium push buttons and crown are hollow, resulting in further weight reduction of the MK-44. Much of the dial has been relieved, the hands are thinner and the date has been eliminated for maximum weight savings. The band of the BRM MK-44 is made of extra-light fabric and fiber, with multiple openings, so not only is it lighter, but breathable too. The buckle has been reduced to only half its regular size, with screws and axles made of titanium. Finally, the four lugs have been radically streamlined, without sacrifice of strength. Putting this remarkable weight-reduction program into perspective, the BRM MK-44 weighs a mere 48.80 grams (1.72 oz), whereas a similar chronograph has a weight of 100 grams (3.5 oz) or more! The result is a new world record for the lightest automatic chronograph.