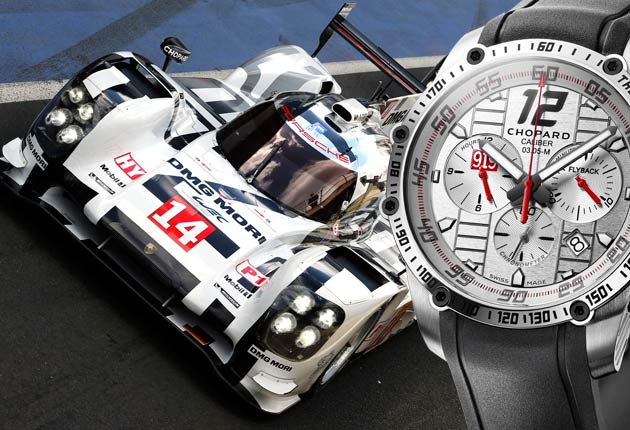 As Official Timing Partner Porsche Motorsport since the start of the season, Chopard will also be alongside the German team for its big return to the 24 Hours of Le Mans.

A legendary team and an equally fabled circuit will contribute to making this a new milestone in the history of motor racing. On June 14th and 15th, Porsche will be looking to earn its 17th victory in the 24 Hours of Le Mans. Chopard is dedicating a limited-edition Superfast chronograph to this landmark event.

The 24 Hours of Le Mans is unquestionably the most highly anticipated fixture in the FIA World Endurance Championship season. In 2014, this legendary race will carry a distinctive flavour, since it sees the grand return of Porsche to this track that has brought the German team 16 victories, a still unmatched record. As Official Timing Partner Porsche Motorsport, Chopard is delighted to be associated with this major rendezvous that is already set to be a highlight of the 2014 season.

Porsche: the legend of Le Mans
It was in Le Mans that Porsche forged a significant part of its legend: having clocked up 16 wins between 1970s and 1988, the German team left an indelible imprint on the Circuit de la Sarthe. While Porsche first took part in the 24 Hours of Le Mans in 1951, its first victory came in 1970, the very same year the film Le Mans starring Steve McQueen was shot. The victorious Porsche 917 K also came first the following year, before Jacky Ickx and Porsche jointly engraved their names on the winners’ list in 1976, 1977 and 1981 with a Porsche 936, and then in 1982 (the last of Jacky Ickx’ six Le Mans wins) at the wheel of a Porsche 956. That same 956 also came first in 1983, 1984 and 1985 before passing the baton to the Porsche 962 C, which won the 1986 and 1987 editions. The 1990s would see Porsche score four more wins, with a Dauer-Porsche 962 Le Mans in 1994, a Joest Porsche TWR WSC in 1996 and 1998, and finally, the very last victory in 1998 with a Porsche 911 GT1-98. Such is the exceptional track record that Porsche intends to enrich by this year’s return to Le Mans alongside Chopard, its Official Timing Partner.

Chopard and Porsche Motorsport: shared values
United by shared values such as the constant quest for performance and excellence, Porsche Motorsport and Chopard naturally gravitated towards each other around their passion for racing. Born of a joint desire to pursue reliability and innovation, the exceptional mechanics emerging from the Porsche Motorsport or Chopard workshops have significantly influenced their respective fields and remain benchmarks for aficionados of motorsports and watchmaking.

The paths of Porsche and Chopard also meet in the story of another legend: Jacky Ickx. An exceptional driver who has put his name in the history books by feats achieved in several motorsports disciplines, and a longstanding Chopard ambassador, Jacky Ickx – nicknamed “Mr Le Mans” – can lay claim to six victories in this legendary case, of which four at the wheel of Porsche! 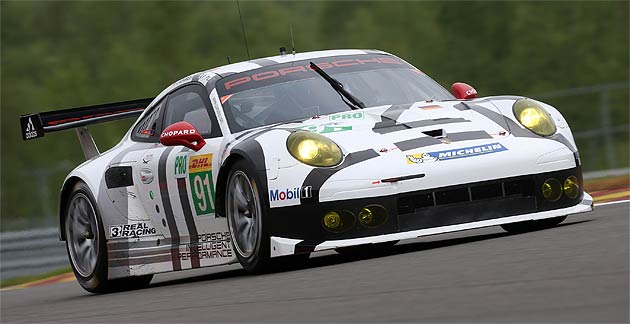 Porsche Motorsport: the eagerly awaited return of a legend
This legendary dimension will be once more in the limelight on June 14th and 15th, at the 82nd edition of the 24 Hours of Le Mans. 16 years after its 16th victory on the fabled track, Porsche will be making its grand comeback, with four cars competing: two Porsche 911 Hybrids in the LMP1 category; and two Porsche 911 RSRs in the GTE Pro category. Four cars that will roar off at exactly 15:00 hours on June 14th for two intense turns of the dial by the hours hand – all under the watchful eye of Chopard, Official Timing Partner Porsche Motorsport

Porsche Motorsport’s return to the 24 Hours of Le Mans in this configuration also signals the German manufacturer’s ambitions. New cars, new teams, new drivers, a new factory: Porsche Motorsport has opted to make its comeback to the FIA World Endurance Championship this season in order to continue building the legend linked with its name.

Each weighing a minimum of 870 kg, the cars competing in the LMP1 category burn 30% less fuel while guaranteeing levels of intensity and performance on a par with previous models. According to 24 Hours of Le Mans organisers, never in the history of motorsports have regulations one so far in taking account of the challenges currently facing society in terms of sustainable development.

It is this same vision of the future and this same determination to push existing boundaries that drive Chopard in designing and developing its mechanical watches. Witness in particular the Superfast collection dedicated to motor racing, and of which Chopard is launching a special edition to celebrate the return of Porsche to the 24 Hours of Le Mans with its 919 Hybrid. The Superfast Chrono Porsche 919 Edition, a chronograph picking up several aesthetic features of the high-speed car from the German car manufacture, is issued in a 919-piece limited edition.