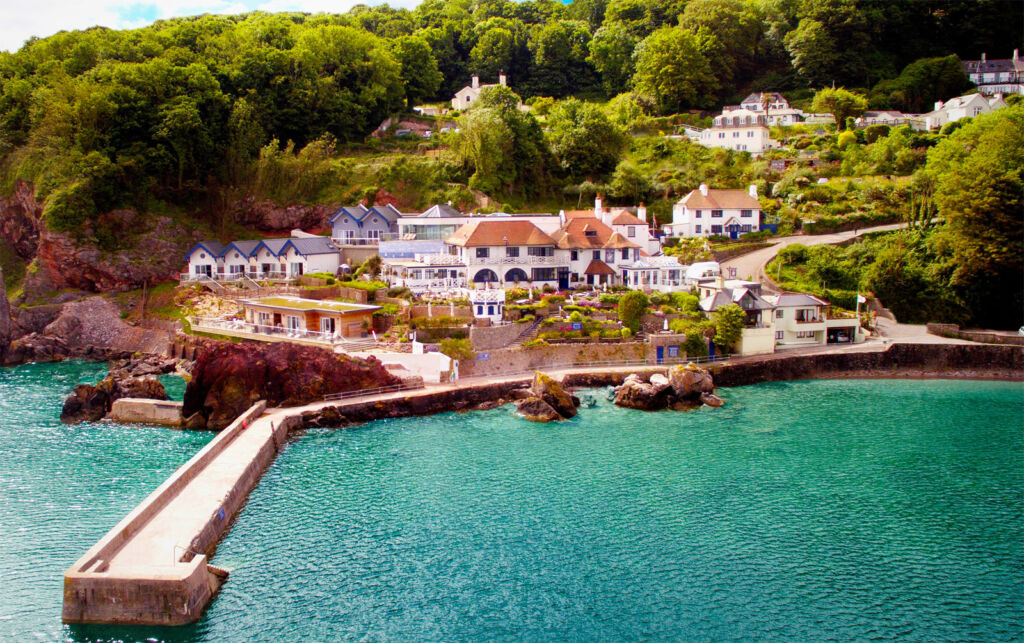 Simon Wittenberg enjoys a two-night weekend stay at the multi-award-winning AA five-star “Inn on the Beach” in Babbacombe Bay on the picturesque South Devon Coastal path.

Overview
This is a hotel with a difference, as guests are rewarded for their efforts just getting there. Perched on the side of a hill overlooking a picture-postcard bay on the outskirts of Torquay, the Cary Arms & Spa is accessed via a steep stone-walled single lane, followed by an even narrower access road to get to the guest car park, which your pounding heart, nor your car’s sensors will appreciate, especially if it’s dark.

Fortunately, the staff are there to guide you in to avoid any scratched paintwork, and the hotel does offer a complimentary valet service if you don’t wish to take on this “challenge” on arrival and departure. 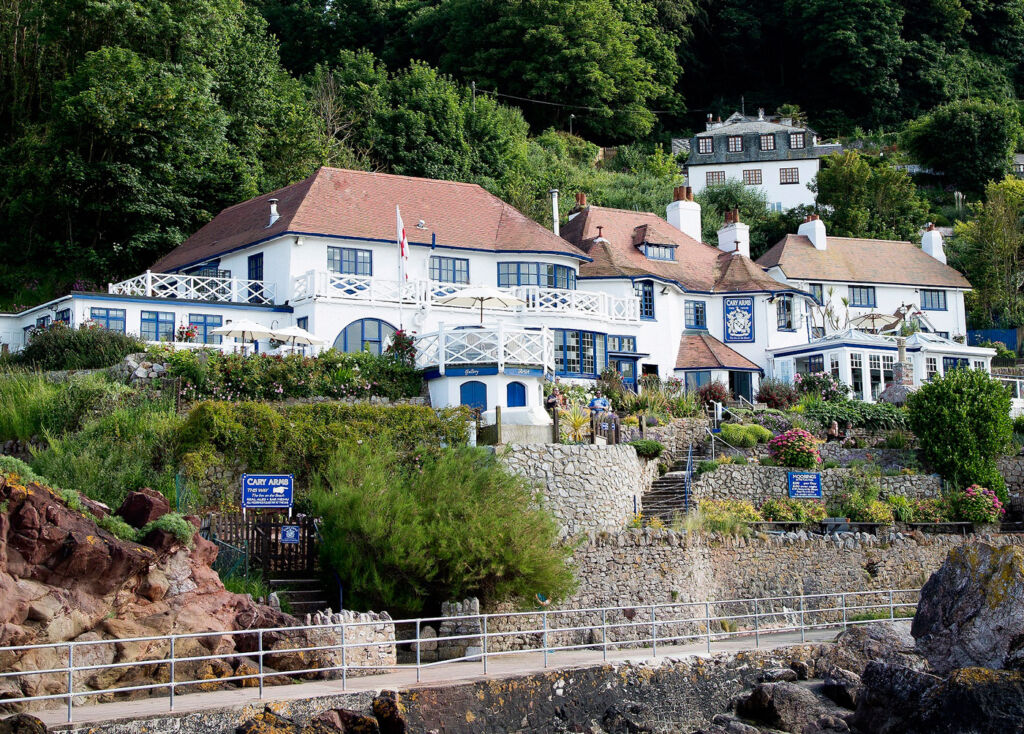 Nevertheless, after you have conquered Beach Road and the tight confines of the parking area, your eyes are treated to a spectacular view and a magical location, a panoramic vista of the unspoilt Jurassic coastline stretching as far as Portland Bill on a clear day. Created in 2006 by legendary hotelier, Peter de Savary and his wife Lana, the Cary Arms & Spa is formed of a cluster of different types of accommodation. 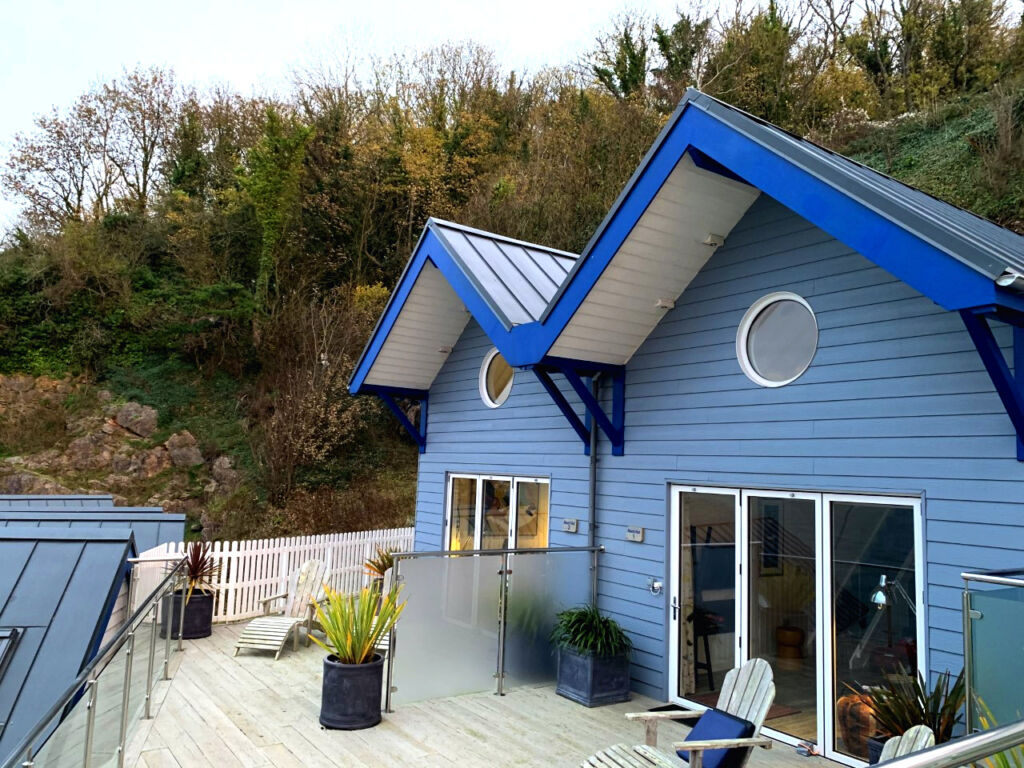 Sleeping and relaxing
Our chosen accommodation during our stay was one of the two duplex light blue wooden Beach Huts that sit next to the glass-fronted Cary Spa. Looking out over the pier where you will catch a fisherman or two waiting patiently for their catch until dusk, you can instantly see the attention to detail, and that no expense has been spared on the decor. 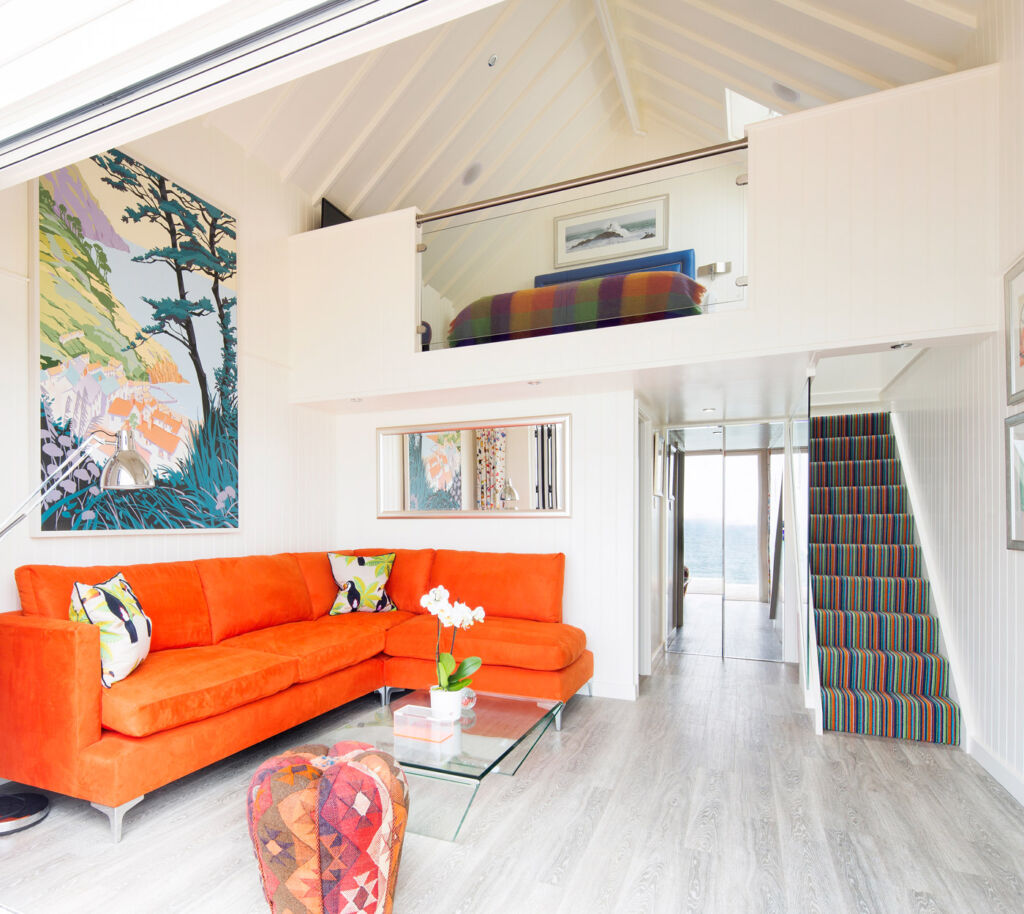 You are greeted by ambient lighting and a bright orange ‘L-shaped’ sofa sitting in front of a glass table complete with a decanter filled with sloe gin. Other quirky features include a champagne cork stool, a ceiling fan which resembles a yacht propeller and the atmospheric wall-mounted fireplace.

At the rear of the Beach Hut is a generously-stocked bright orange Smeg fridge with complimentary drinks, plus an en-suite bathroom with a walk-in rain shower and accessories from The White Company. 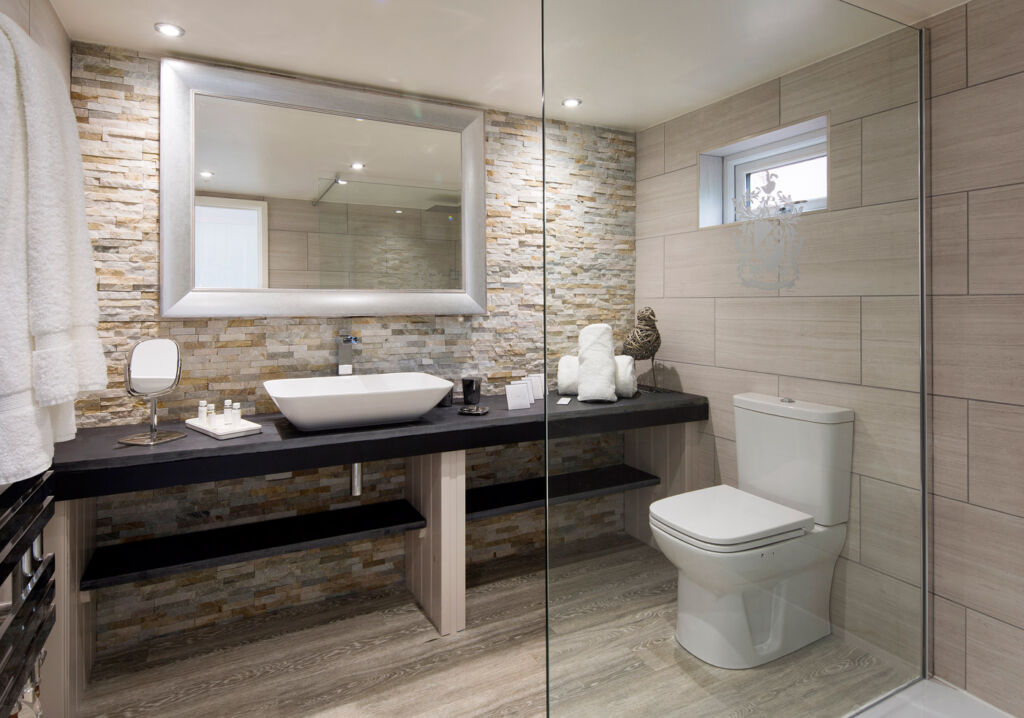 Climbing the multi-coloured stairs to the mezzanine level overlooking the lower floor, and you are welcomed by an inviting king-sized bed dressed in crisp white sheets with sticks of rock on the pillows, as well as a teddy bear-shaped hot water bottle. 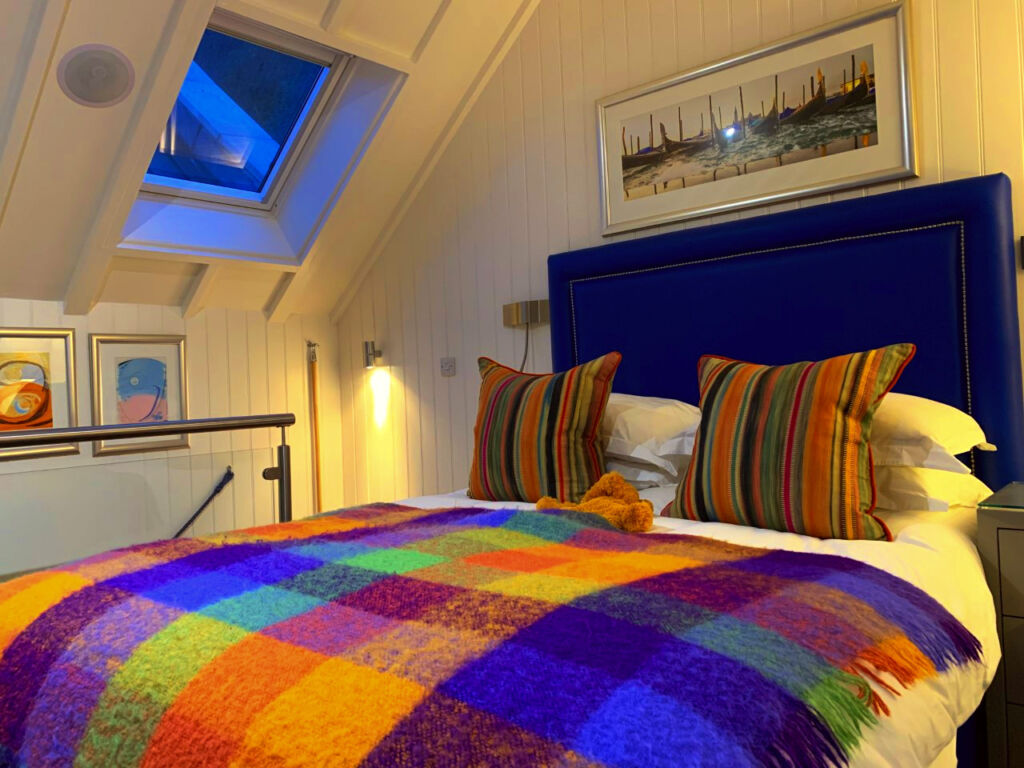 The sleeping quarters have equally been tastefully furnished with a battery-operated candle, an array of literature highlighting the attractions in the area and a second flatscreen TV. If that’s not enough, you can look through the porthole when in bed, and admire nature at its best.

Relaxing and rejuvenating
The Cary Spa, which was formally unveiled in August 2016, sits behind the inn and adjacent to Beach Huts 1 and 2. It can only be accessed by guests who have opted for the additional cost of £25 per person per day. Therefore, as only a handful of residents seemed to pay for this privilege when we were staying, it was never busy at the times that we went. 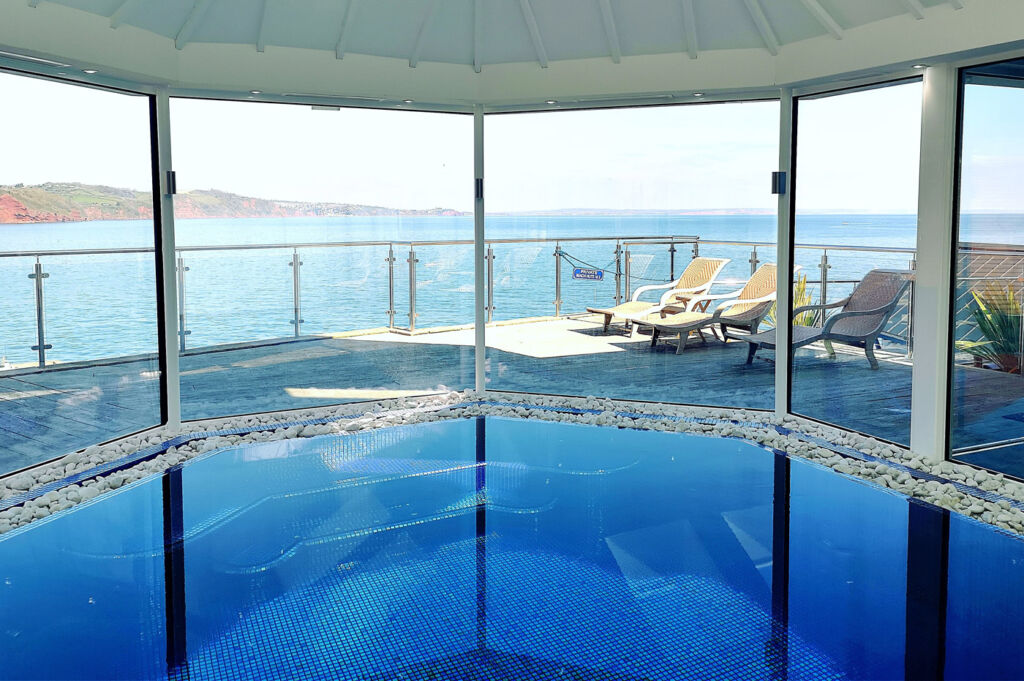 At the heart of the Spa is the hydrotherapy pool, which has jets activated on-demand and a waterfall on the far wall for an added feeling of relaxation. Thanks to the large floor to ceiling windows, you can admire the view across the bay when sitting in the lukewarm water, or when reclining on one of the comfortable wicker loungers.

It’s also worth trying the steam room and sauna, as well as the experience shower, which has a hot “Rainforest” mode with birdsong, whilst cool “Mist” is accompanied by the sound of thunder and lightning.

The option that we were more hesitant to try, for obvious reasons, was “Arctic Cold”, although I did pluck up the courage to dip my feet under the short freezing cold burst of water just so I could say that I’d done it. Although we never saw anyone use it, there’s a small gym with a few machines to the left of the pool for those harking after a row or ride in the warm.