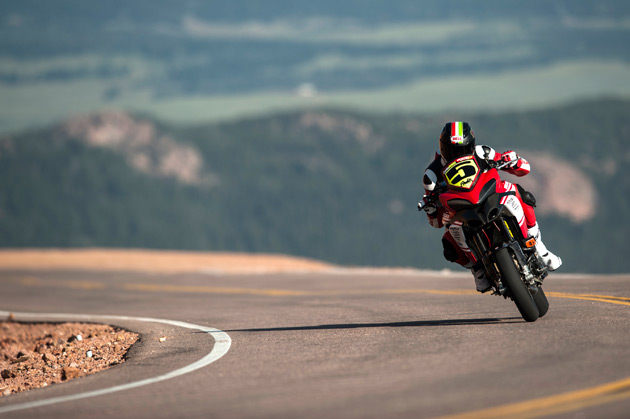 Carlin Dunne dominated the 2012 Pikes Peak International Hill Climb, setting the new course record for motorcycles today from pole position for the second year in a row on a Ducati Multistrada 1200 S. This win marks Ducati’s third-straight victory at the historic “Race to the Clouds”.

Both Dunne and Spider Grips Ducati teammate and six-time winner Greg Tracy finished the race under the 10-minute barrier, which is a first for any motorcycle in the race’s 90-year history. Dunne crossed the finish line at the 14,110-foot summit of Pikes Peak with the record-setting time of 9:52.819, beating his previous record of 11:11.32, while Tracy was less than six seconds behind, placing second with 9:58.262.

“Today was an emotional day,” said Dunne. “The year of work the Spider Grips Ducati team put into preparing for Pikes Peak got us across the finish line in under 10 minutes, an achievement we’re very proud of. When we heard that we won and broke the record for the second time, I was speechless. The one-two finish proves the Ducati Multistrada 1200 S is the ultimate bike to conquer Pikes Peak.”

Dunne reached speeds above 144mph (230kmh)  throughout the mountain’s straights, and traversed 156 turns, ranging from hairpin, blind, decreasing radius, and multi-apex turns, while consistently gaining elevation up the technical 12.42-mile (20km) course. The Pikes Peak International Hill Climb, or “Race to the Clouds”, is situated in a range of the Rocky Mountains, 16km west of Colorado Springs and races from a start line altitude of 2,862 metres (9,389ft) to a finish line at 4,300 (14,100ft). 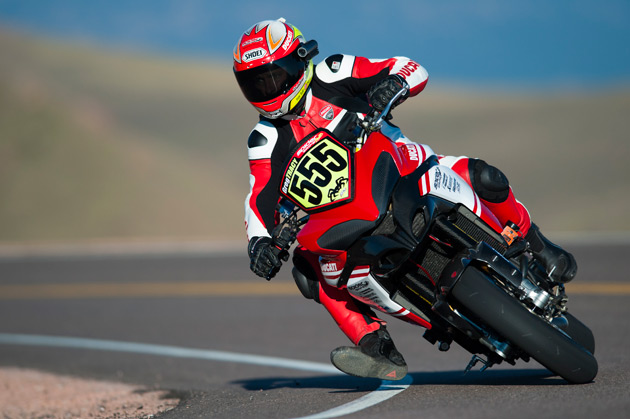 “Ducatisti around the world are celebrating the victory of Carlin Dunne and the Spider Grips Ducati Team – we are all very proud,” said Dominique Cheraki, General Manager of Ducati North America. “Three years ago we chose the Multistrada 1200 S to compete at Pikes Peak to showcase its on-and-off road capabilities, class-leading ergonomics, handling, and performance. When we were alerted that the entire course would be paved in 2012, there was no doubt that the Multistrada 1200 S was still the right choice and breaking the record today proves this.”