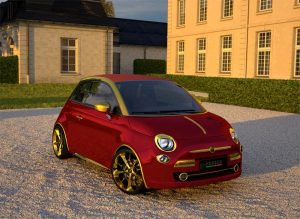 Fenice Milano the luxury car customisation company has done it again with its La Dolce Vita, coupling one of my favourite things – Gold with my wife’s favourite car resulting in the amazing Felice Milano La Dolce Vita Fiat 500 – a sure fire hit in our household!

Back when the new Fiat 500 was first launched my wife said those dreaded words ‘I want one! swap my Fiat Panda for that one”… for two years prior to that moment I was forced to drive around in a Fiat Panda Eleganza just because my wife insisted that I did my bit to save the planet, restricting my own brutes in the garages to a weekend jaunt. Don’t get me wrong, I have a great affection for small Fiats, the build quality is great, the ride more than acceptable, the only downside is they are a little cheap and boring. Roll on a few years and Fenice Milano hits you right between the eyes with the La Dolce Vita Fiat 500 something that meets both mine and my wife’s requirements, only problem for me now is trying to remember the number of the combination lock on my wallet!

For the more nostalgic of you, the new Fiat 500C represents the modern heir of the internationally renowned Italian automotive industry’s symbol. Born as an homage to the convertible model of the 500 launched in 1957, the 500C by Fiat with its avant‐garde solutions in the 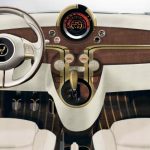 mechanics, power train and comfort on board. But for all those like me who aren’t satisfied by the standard versions and want to add exclusivity to the original retro style charm, Fenice Milano presents two new versions whose precious finishing and technical improvements give life to a true jewel of the Made in Italy style and manufacture. The La Dolce Vita Fiat 500, this is the name of the model by Fenice Milano that uses the convertible 1.4 petrol 101 HP automatic version as base of the famous city car. Blinking at the golden age of the Italian cinema and lifestyle, that attracted many international stars and jet‐setters, ‘La Dolce Vita’ represents the flagship of Fenice Milano’s production.

Thanks to its small size (355cm length, 165cm large and 149cm height), this small jewel is ideal for those who want to move comfortably in the city without giving up luxury and exclusivity. Embellished with many 24k gold inserts and fine woods like teak, manufactured by Fenice Milano artisans, with suspension adjustments and the optimization of the exhaust and suction system guaranteeing better performances and more comfort on board. 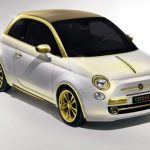 The Fenice Milano La Dolce Vita Fiat 500 is available in two colours expressly studied and realized for Fenice Milano that help exalting its uniqueness. The Sportiva version is offered in a multi‐layer chromium Deep Red, embellished by overlapping ten different layers of varnish that create the particular semi chrome effect. For the more sober fans of the La Dolce Vita Fiat 500 and those that require a refined style, instead, the Classica version has been created in a white gold pearlescent varnish. This limited edition has a varnish infused with small particles of 24K gold. For both versions the seats and the internal elements are in pure leather and in a Alcantara Natural colour with handmade exposed seams. Moreover, in the passenger compartment of ‘La Dolce Vita’ the console has been entirely redesigned, moving the instrument board in a central position and embellishing it with a golden frame, while the dashboard is in teak with 24K gold inserts whose profiles are hand shaped by the Fenice Milano’s artisans.

The wheel, redesigned starting from the original one, has the external crown in teak and the internal one in leather with commands in 24K gold, and also in the footboard the original carpeting has been substituted with teak.