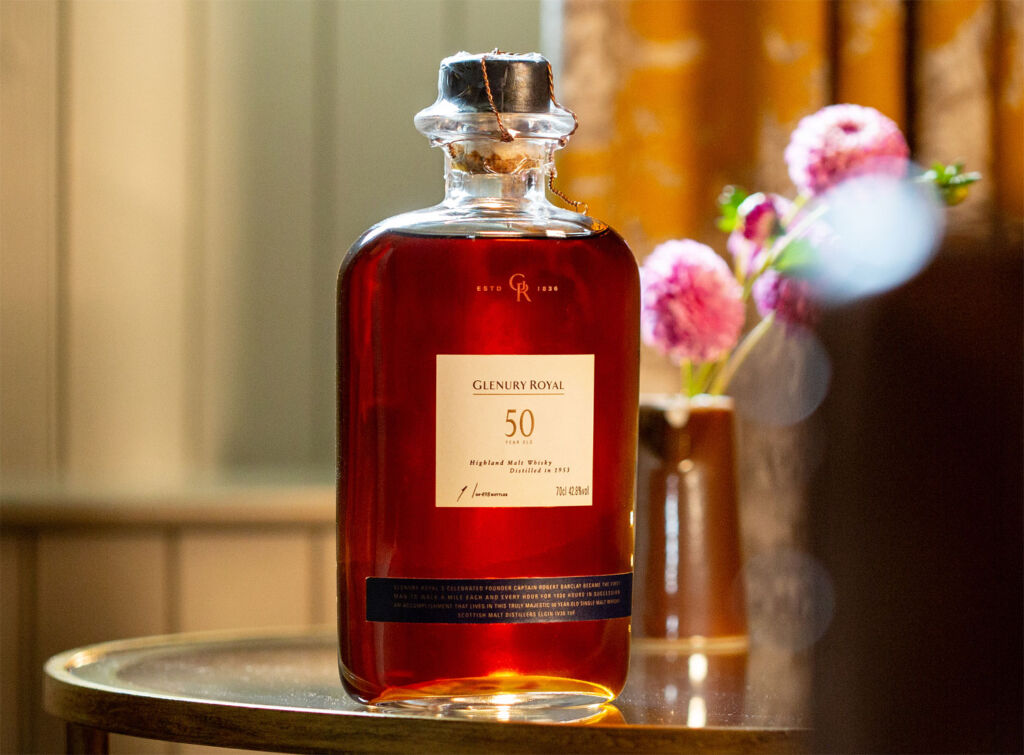 An extremely rare bottle of Glenury Royal 1953 Whisky has sold for a record £14,000 at an online auction. The single bottle achieving the record hammer price was #1 of 498 bottles and was released less than 20 years ago.

How much would you pay for a bottle of whisky? Some of us might stretch to a few hundred pounds, and for that, we’d be expecting something rather special. However, others seem to have no qualms about paying many thousands for a single bottle.

Recently we’ve seen gold prices reaching all-time high numbers, and it now seems that whisky is giving it a run for the money in the record-making-stakes.

At a recent auction, Bottle #1 of Glenury Royal 1953 went for an incredible £14,000 at an online auction by Whisky Auctioneer. Admittedly, it was a rather special bottle. It was the first of 498 bottles of Glenury Royal 1953 50 year old which was released in 2003. The whisky was a special release by Diageo which paid homage to the distillery’s legacy and one of the rarest as well as the oldest whisky ever bottled for the annual series.

With an intriguing and dramatic history, The Glenury Royal Distillery was located near Stonehaven in the Highland whisky region before it joined the array of Scotland’s lost distilleries. It closed its doors and ceased production in 1985, meaning its liquid is exceedingly difficult to come by. It is this scarcity that has led to these fascinating and historical spirits from Scotland’s lost distilleries becoming some of the most highly prized and sought-after possessions for collectors in recent years.

Iain McClune, Founder of Whisky Auctioneer, said: “This fantastic result is a testament not only to the exceptional maturity of the Glenury Royal 1953 50-year-old but also to the enduring mystery and lure that lost distilleries pose for rare whisky collectors and enthusiasts around the globe.

“The secondary whisky market has witnessed significant growth in recent years, and a key component of this growth has been lost distillery bottlings. With dwindling stocks, many of these expressions are becoming exceptionally rare and sought after. We are enthusiastic about showcasing a wide range of lost distillery examples in our monthly auctions at varying levels of accessibility. For a budding collector, these whiskies can be a great place to start, offering a fascinating window into Scotland’s distilling past.”

The Glenury Royal Distillery was founded in 1825, taking its name from the glen that runs through the Ury district. Its first owner was Captain William Barclay, a diverse character and a close friend of the Royal Family. His whisky was just one of the three to be granted permission to use the Royal suffix/prefix with only Royal Lochnagar and Royal Brackla sharing the honour.

This record-breaking single malt was not the only lost distillery highlight of the online whisky sale. A very rare independent bottling from closed Speyside distillery Caperdonich (previously known simply as Glen Grant 2) achieved a hammer price of £3,100.

Other noteworthy results from the auction included a 55-year-old single malt from The Macallan, presented in a handcrafted Lalique crystal decanter, which reached a £60,000 hammer price, and a cask filled with spirit distilled at Glenrothes distillery in 2009, selling for £8,400.

To find out more and to register to take part in upcoming auctions please visit www.whiskyauctioneer.com.