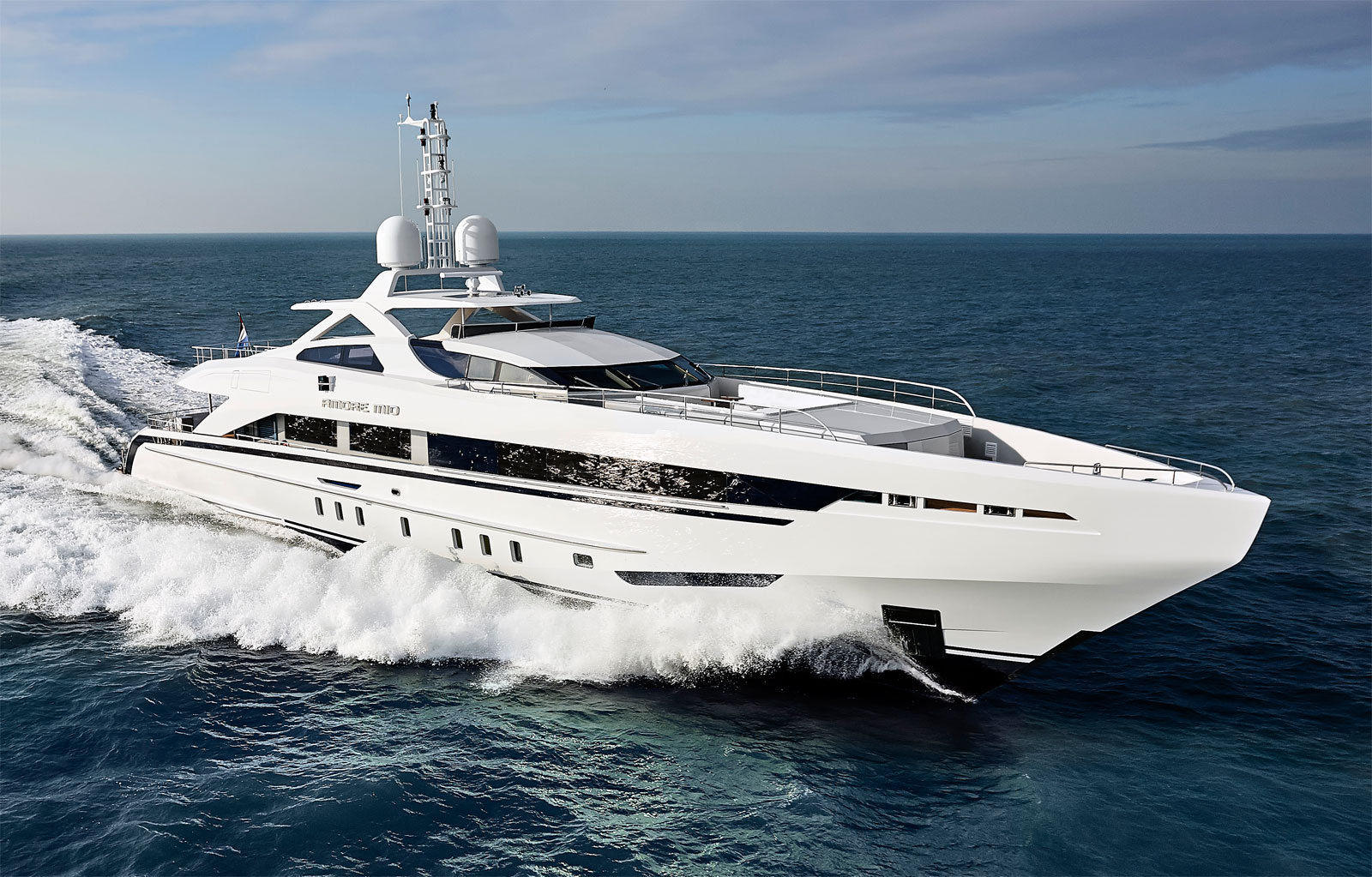 In the second half of this special two-part feature, Simon Wittenberg climbs aboard the 45-metre semi-displacement Heesen “Amore Mio” superyacht

Around 50 per cent of the superyachts built by Heesen is commissioned by a buyer, whilst the remaining “tranche” is manufactured according to a set specification for that model. Two of the latter, one of which is a 37-metre, are currently in progress for delivery next summer. 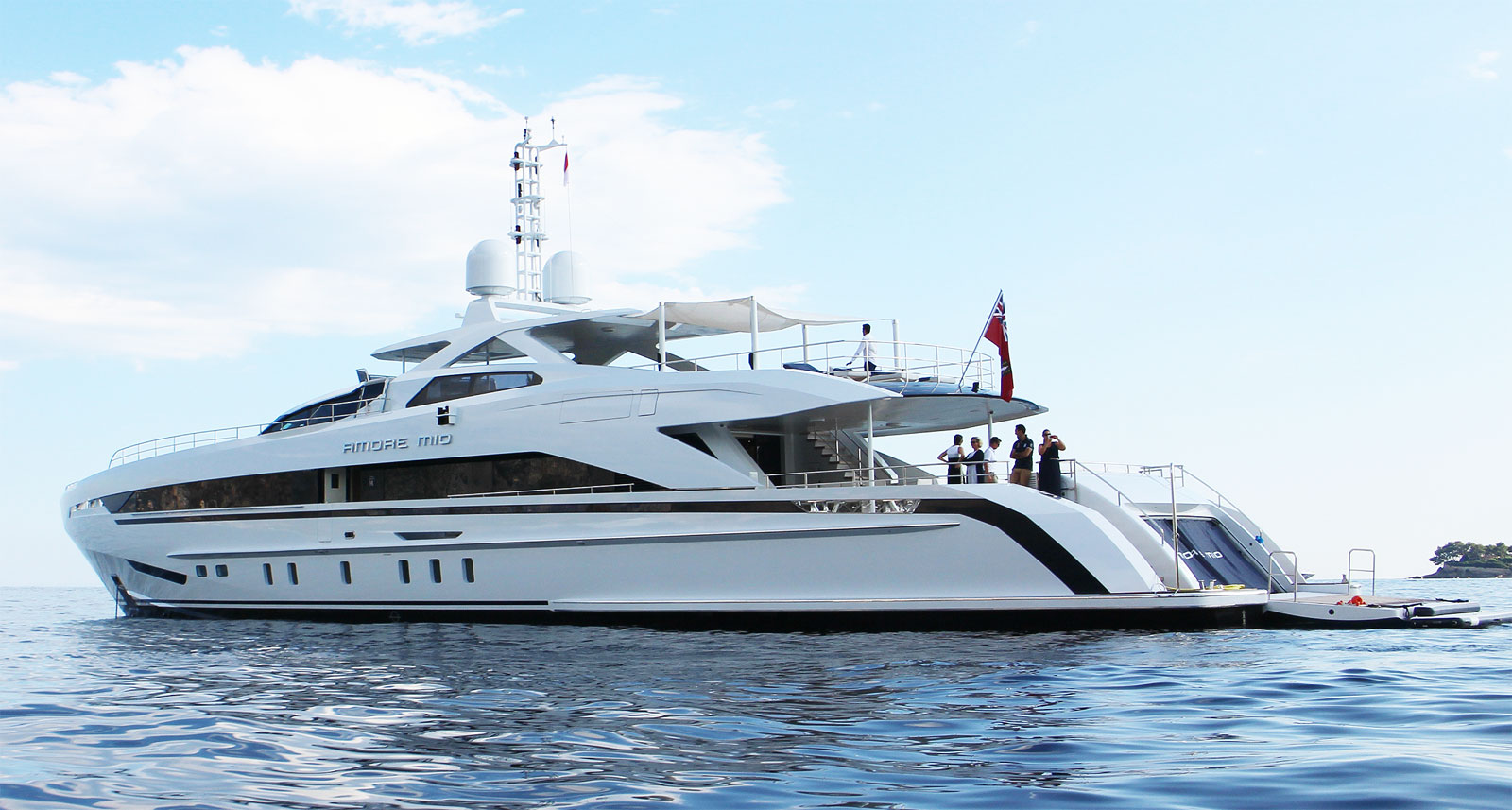 With a yacht that’s made to specification, new owners can intercept the build before it’s finished in order to customise it according to their own tastes and desires, and they also have the privilege of being able to change their mind along the way. Although it’s effectively started by Heesen “at risk”, every yacht, however, always has a home to go to before it leaves the yard at Rijnstraat in the Netherlands.

“Amore Mio”, the largest and most powerful sports yacht ever built in Holland, and worth in the region of €29 million (excluding VAT), is one such example. Amongst a few other stylistic changes, out came the original Jacuzzi, and in went, a perfectly flush deck as the owner is supposedly more keen on yoga. 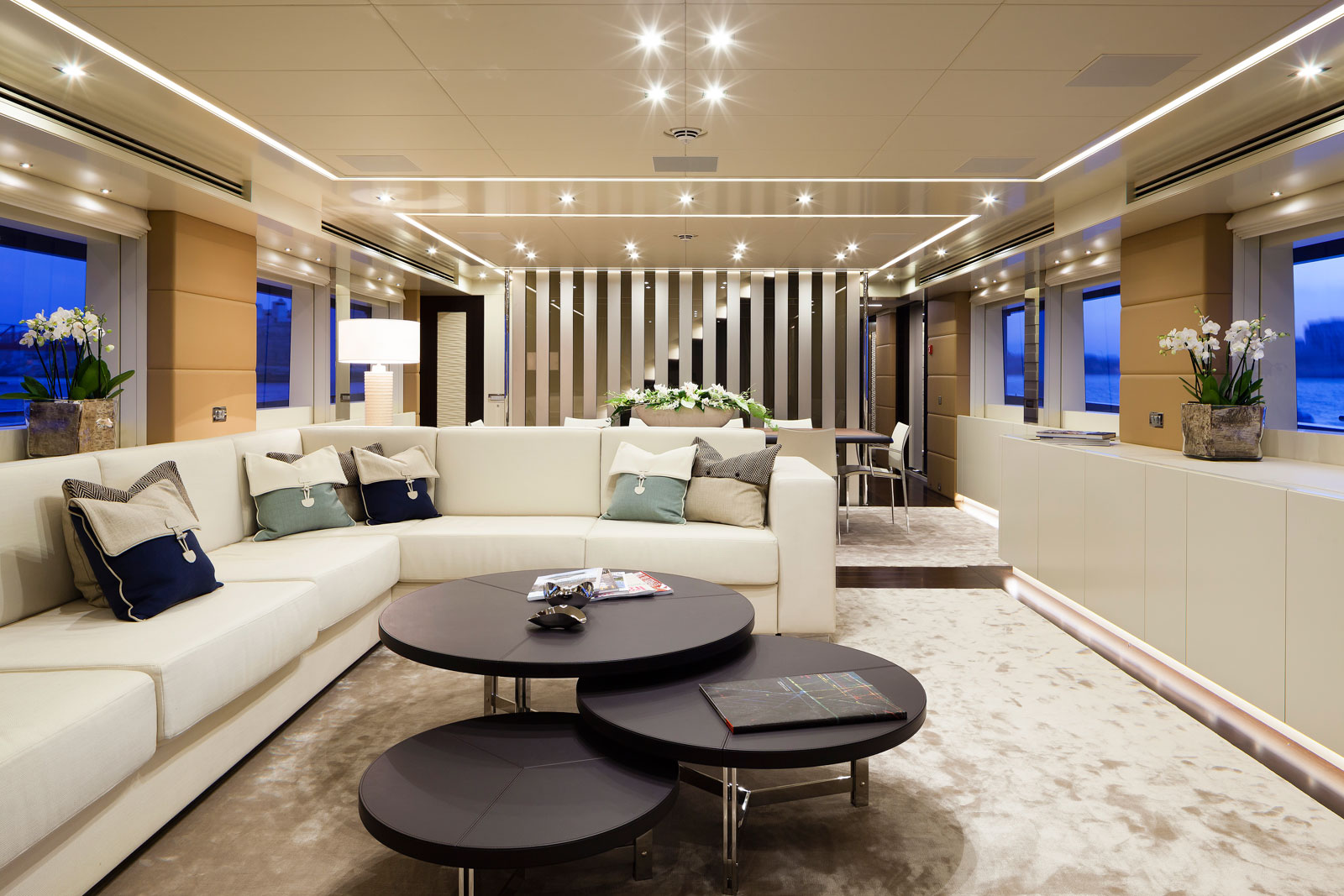 Because of its smaller size, relative to something like Galactica Super Nova, it’s much easier to feel at home on the Omega Architects-penned Amore Mio. It’s a less formal ambience, and it’s immediately clear that this vessel has been conceived for the purpose of pure enjoyment and relaxation.

Guests are greeted by plenty of soft seating and rolled beach towels inscribed with “Amore Mio”, and it’s akin to being in a large luxury penthouse rather than wandering around a floating apartment block. With only three decks (lower, sun and main), it’s much more of an intimate and personal experience, as the hosts and hostesses serving the guests are far less spread out. 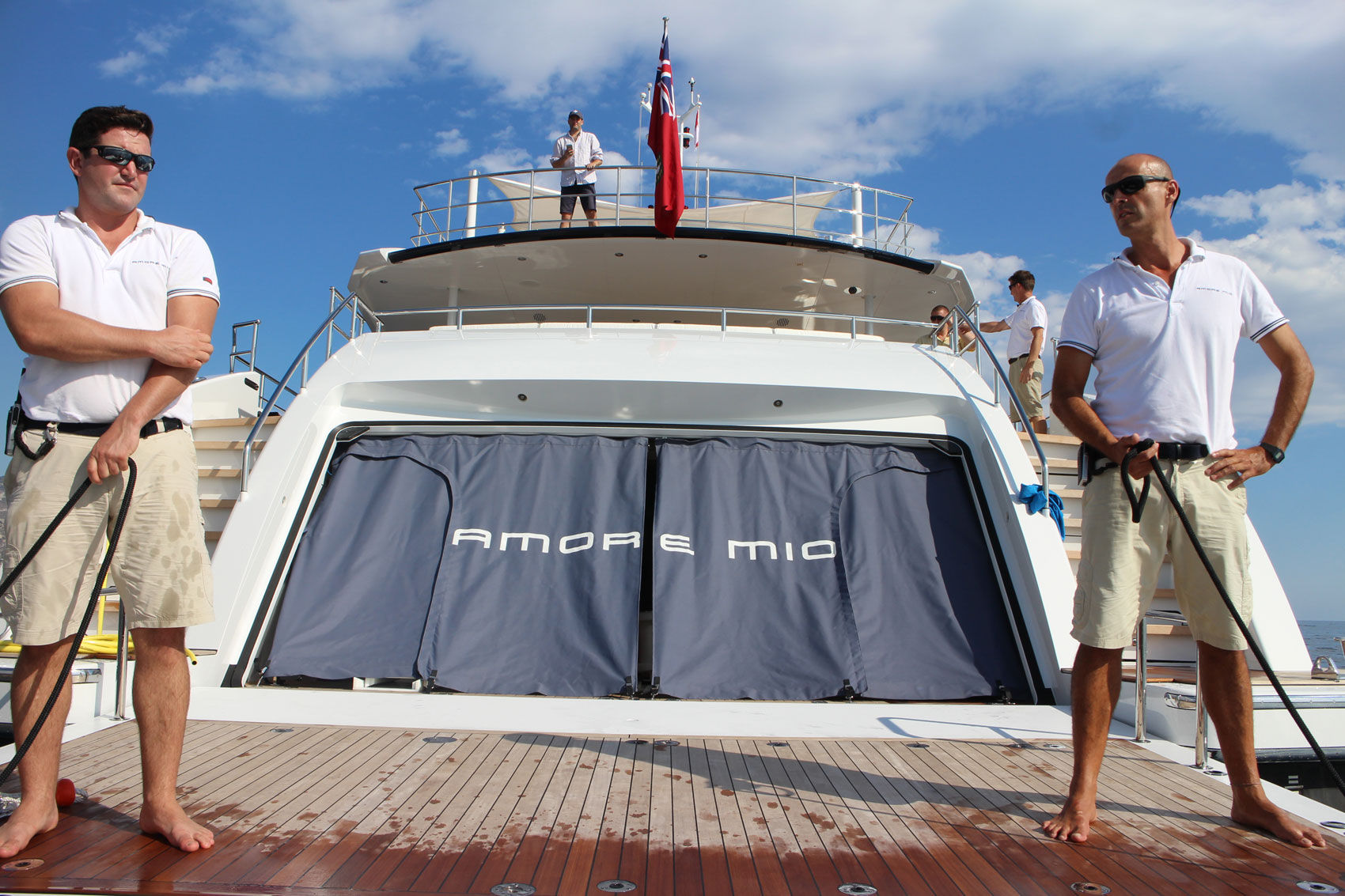 The seven crew (plus the optional live DJ which we had), are on the yacht for around six months at a time when it’s in service, and they have the unenviable task of keeping every surface blemish-free, whilst the Ukrainian chef creates spectacular gastronomy within the small galley. Come the winter, Amore Mio resides in Malta before re-joining the Mediterranean circuit for another sunshine-kissed summer.

The rear garage is one of the most impressive parts of this stunning vessel. This is where the two pristine white 3,920hp engines sit that catapult the yacht to a maximum cruising speed of 30 knots (56 km/h), the same as Galactica Super Nova, but with a lot more noise and gusto. Amore Mio’s engineer proudly showed off his “office” next to these two great powerhouses, and made everything look so easy as all the different functions and fluid levels can be seen on one touchscreen. 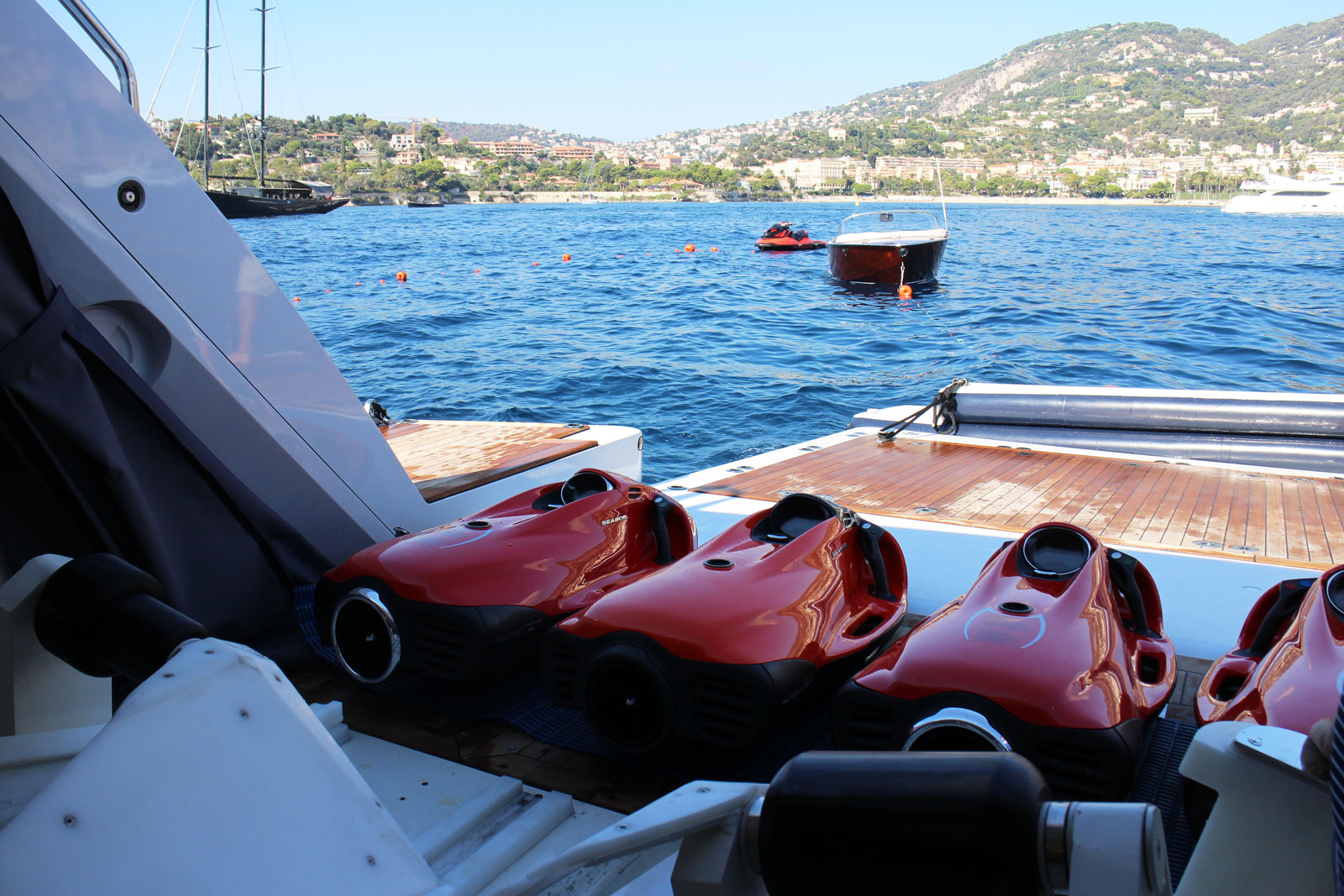 However, the pièce de resistance of the garage is what can only be described as the equivalent of a large toy box, to ensure that boredom never strikes. On one side, there is the six-metre custom Swiss-built, Boesch mahogany tender, whilst on the other, there are four red SEABOB F5S’s (costing a mere €11,000 each) – which we tried, alongside one 300hp Sea-Doo RXP watercraft, one jet-powered surfboard, plus an inflatable sofa which attaches to the tender for “joyrides”.

This is of course not excluding the drone and the GoPro camera to catch every moment near and far. Orchestrated by the charismatic captain, Tripp Hock, all of this sports equipment was unleashed into the water from the yacht’s 12 square metre swimming platform, turning the surrounding waves near to Beaulieu-sur-Mer into a playground for the rich, the perfect way to end a weekend in the company of Heesen. 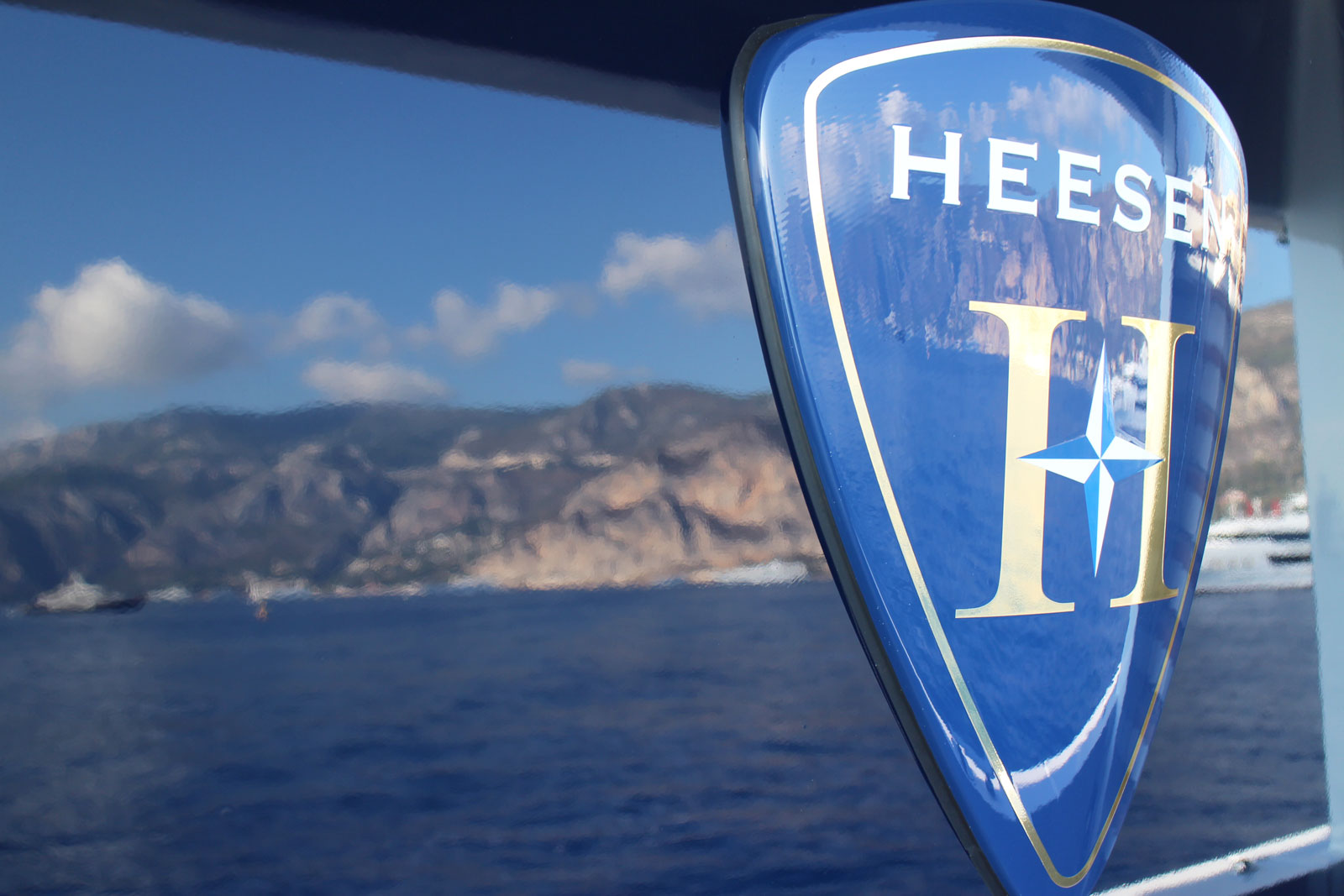 With thanks to the Hermitage Hotel and Café de Paris for their exceptional service and hospitality.

See more of the Heesen Amore Mio below