After a relatively early start on a Saturday morning, and a short 40-minute journey alongside the snow-capped Mount Esja and stunning autumnal-looking scenery, the first point of interest was Þingvellir (or Thingvellir) National Park, which lies around 40 kilometres northeast of the capital. It is the location of the first Icelandic parliament, a holy site, and sits on top of the Mid-Atlantic Ridge.

This is a large fissure that stretches between the Eurasian and the North American continental plates which are drifting further apart every year. As well as admiring the beautiful surroundings, it’s a unique opportunity to make your way down a path, once a road open to cars, between high sided rock faces which are actually the edges of the two tectonic plates. There are also various walkways that lead you down to the Öxará river (above) where you can witness large brown trout swimming close to the surface. 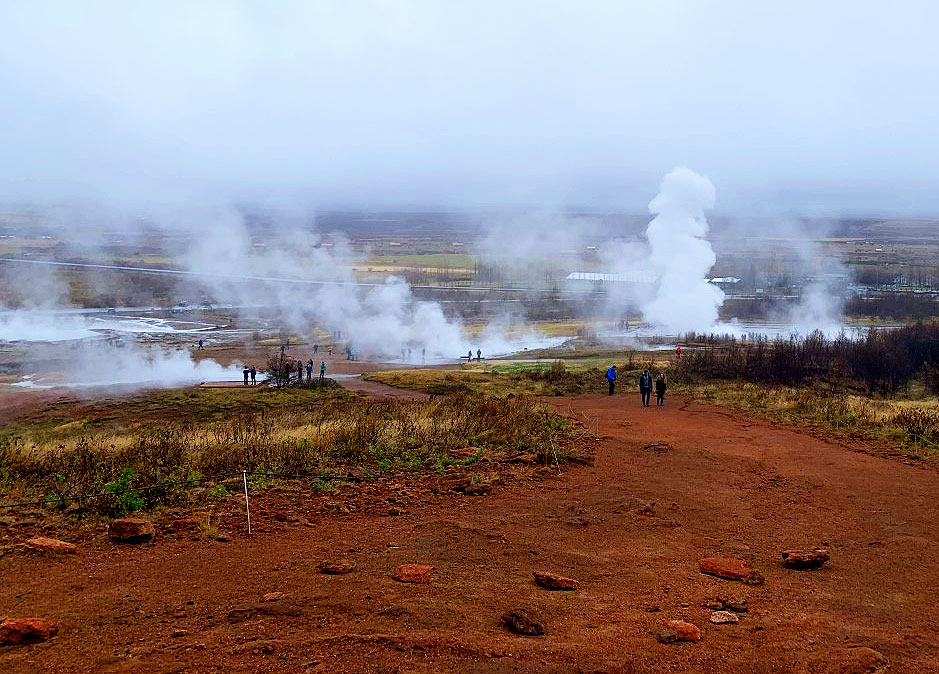 With Cami safely back on the rear seat after stretching her legs, we hit the road for another scenic drive to the Geysir Geothermal Field, one of Iceland’s most visited locations on the Golden Circle trail. 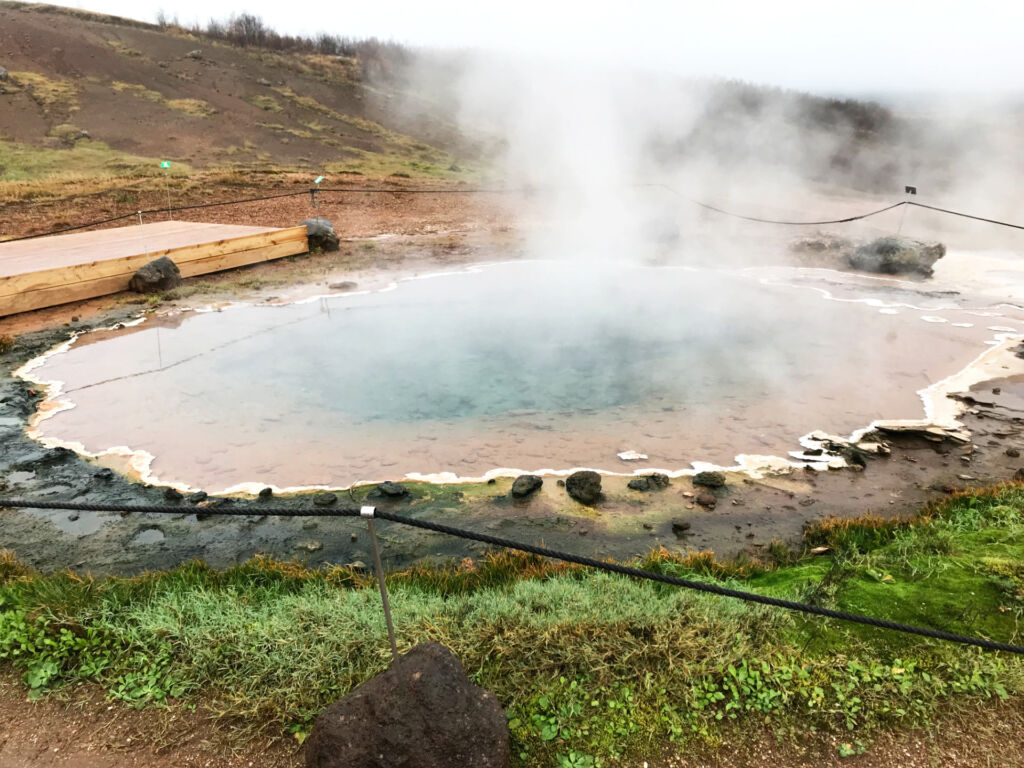 Surrounded by rusty red earth, there are various dormant pools of hot water, varying in size and depth, but only one called “Strokkur” spews a jet of water into the air. It erupts every four to eight minutes, which means you don’t have to wait long to see the water column in action. However, there is no way of telling how intense it will be, or whether it will be one or two consecutive jets.

The trick nonetheless, is to read the wind direction to avoid getting wet, plus it is recommended that visitors keep a distance as the water temperature is 125 degrees Centigrade, hence you can see it bubbling away on the surface. Although this attraction is very busy with tourists, it’s definitely worth stopping by, as seeing nature in action before your very eyes, is a real spectacle.

When it comes to satisfying hunger during the excursion, Bessi will find a suitable lunch stop to suit any dietary preferences. With vegetarian being one of ours, our destination was Friðheimar, a short drive away from Geysir, which is essentially a farm dedicated to all things tomato. Around a fifth of Iceland’s tomatoes come from here, and the business uses the heat from the geothermal water, as well as hydroelectric power, to fuel the bright lights, encouraging the tomatoes to grow in numerous vast greenhouses.

The restaurant itself sits within one of these next to the rows of vines, and our host warned us that we may catch a glimpse of the bees flying around. Although we didn’t see one during our visit, they are supposedly friendly and are only tasked with the job of pollinating the awaiting crop.

Being within the realms of the Golden Circle, this eatery is an extremely popular location, and booking a table in advance is strongly advised (which Bessi can do for you). On the lunch menu, there are a few options, such as tortilla and fresh ravioli, but one of the most famous dishes here is the very tasty tomato soup, which comes with fresh crusty white bread, sour cream and cucumber salsa. Although it’s expensive by UK standards (at ISK 2,390 or £15 per person), you are entitled to as many bowls of soup, and as much of the delicious homemade bread as you can stomach.