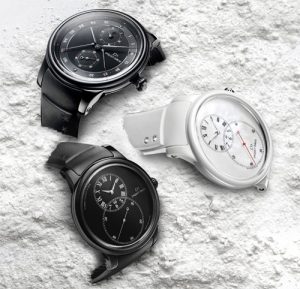 Giving concrete form to the mystery of time is the eternal challenge for a watchmaker. Jaquet Droz meets this challenge with the arrival of three models in the Jaquet Droz Grande seconde ceramic watch collection. Scratch Proof, inert and produced with exceptional expertise at extreme temperatures, the ceramic of the case symbolizes the values of purity, durability and refinement so dear to Jaquet Droz.

Contemporary in spirit, the Jaquet Droz Grande seconde ceramic Black timepiece displays an elegance that is intended to last: the 44 mm watch case is made of resistant ceramic, whose color and radiance will never fade. Jaquet Droz has now complemented this exceptionally strong material, the hands in black gold with a touch of red on the tip of the seconds hand and the six markers it indicates. This new chromatic signature, which suggests an authentic, highly refined luxury that is entirely contemporary, brings a new dynamism to the two interlinked circles and it strengthens the compelling power of the number 8, the Manufacture’s symbol of good fortune. The same quest for perfection yielded the opaline black dial, and by the contrast between the matt face and the gleaming ring, carefully integrated.

Behind the immaculate and restrained form of this new and exceptional model collection lie all the know-how and the spirit of innovation that characterize the Manufacture. Tradition, first of all, since the Jaquet Droz Grande Seconde Mother-of-pearl watch adopts one of the historic designs of Jaquet Droz: the 8. Then beauty, evidently, of the dial in mother-of-pearl and the seconds hands in red lacquer. Finally, daring in the choice of a color so intensely present and rarely used in the world of watchmaking: the white. With its self-winding double-barrel mechanical movement, the Jaquet Droz Grande Seconde Mother-of-pearl appeals to the best in Jaquet Droz tradition: the power of its lines, its mechanical reliability, its unique design, and the contemporaneity of an integrated rubber band, also in white, set with 4 diamonds.

With the Perpetual Calendar Ceramic, Jaquet Droz makes a strong statement about its avant-garde identity in the world of Haute Horlogerie. Skilfully housing this famous complication in an ultra-contemporary case, the brand remains true to the ultimate aspiration of generations of superior craftsmen: to achieve simplicity. A complication that transcends Time, the Perpetual Calendar marks the passing of the days of every month, whose number changes in leap years. Its prodigious mechanical memory has become an obsession with the most exacting of connoisseurs and master craftsmen. Jaquet Droz’s master dial-makers showed technical genius, working to specifications that demanded nothing less than perfection. For this Numerus Clausus of 88, they demonstrated the full measure of their talent by creating an opaline black dial adorned by a black gold ring with a fine-brushed finish. In the ranks of connoisseurs who know the ultimate value of Time, all eyes are on this mesmerising timepiece, which can run for 100 years without the slightest adjustment