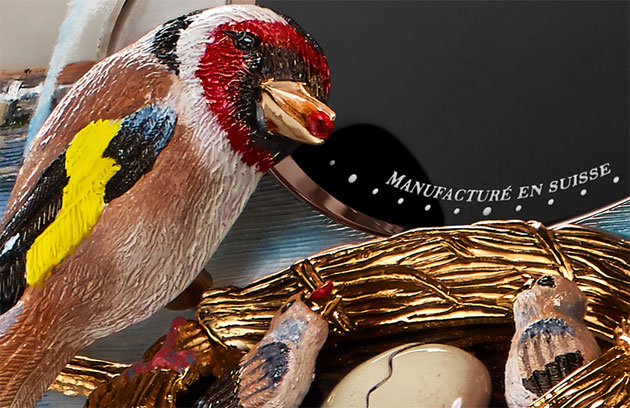 Jaquet Droz unveil The Bird Repeater Geneva, a stunningly beautiful timepiece uniting all the symbols of the Swiss city on a white mother-of-pearl dial 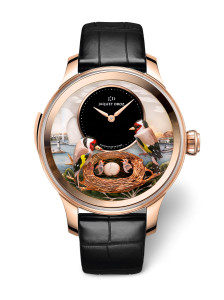 For this new edition, Jaquet Droz has brought together the sum of the talents that make up its Ateliers d’Art to stage a further celebration, this one in praise of Geneva, where Pierre Jaquet-Droz opened the city’s first clockmaking manufacture in 1784 and, at the same time, introduced the production of timepieces featuring grand complications.

Pastoral and urban converge to form the background décor of The Bird Repeater Geneva, uniting all the symbols of the Swiss city on a white mother-of-pearl dial. Thus have the engravers, painters and enamelers achieved the feat of reproducing, in miniature, Lake Geneva, its famous Jet d’Eau fountain and lighthouse – Le Phare des Pâquis – as well as the silhouette of the Salève, the pre-Alpine peak considered the city’s “balcony.”

At the center of the dial, a pair of elegant goldfinches have nested right in the heart of Île Rousseau, the island paradise for birds located precisely at the entrance to the lake. These creatures, their plumage as brightly colored as a Fauvist canvas, hand-sculpted in gold, are accompanied by their two young, and the group is gathered around an egg in the middle of the nest. The meticulously rendered details, the vivacity of the colors, the attention paid as much to the eyes as to each wisp of straw, is a testament to the illustrative talent of the La Chaux-de-Fonds artisans. 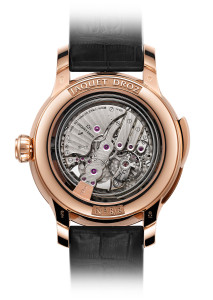 And, as always with Jaquet Droz, beauty and mechanical genius go hand in hand. In keeping with previous editions, The Bird Repeater Geneva boasts 8 animations, minuscule yet spectacular – the birds feeding their fledglings, the spreading wings, the flowing water, the hatching egg – and all paying genuine tribute to the renowned humanoid automata created by Pierre Jaquet-Droz and his son in the 18th century.

The animated tableau contrasts with the great simplicity of the hours and minutes dial, off-centered at 12 o’clock and produced from a disc of black onyx on which two red gold lancine hands make their circular journey, echoing the light diffused by the case, also in red gold and 47 millimeters in diameter. The Bird Repeater Geneva is equipped with a Jaquet Droz RMA88 automatic winding movement and enjoying a 48-hour power reserve, The Bird Repeater Geneva models number just eight in total. A figure redolent with symbolism in the world of Jaquet Droz, connoisseurs will not fail to capture its full significance and all the magic it encapsulates.