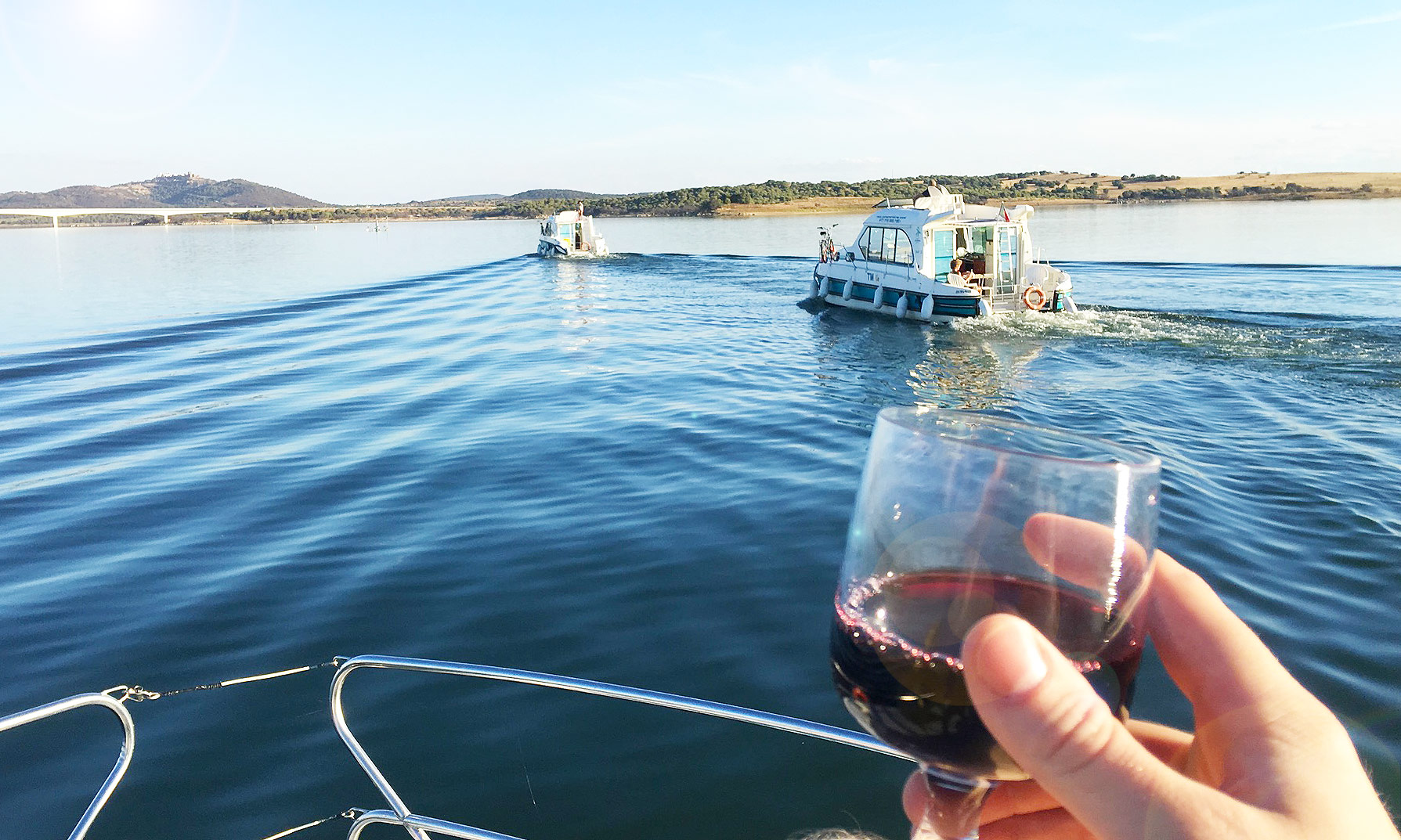 Alquieva, one of the Great Lakes of Portugal, is nestled in the South-East of Portugal, and in one place, actually dissects the border with Spain

Surrounded by the gently undulating hills and friendly locals, it makes for a picturesque destination all year round. Add in some beautiful nearby villages and ancient fortified towns, and you have a very desirable summer getaway indeed.

Lake Alqueva is the largest man-made lake in Western Europe, so some form of powered transportation is a must if you want to get around. Thankfully, the Amieira Marina at the end of the ‘tick’ on the South-West part of the lake has you covered, with an enclave full of modest but pleasant boats of varying berths up to eight people. Life on these boats is not rushed one. At a maximum speed of 10 knots, these aren’t speedboats, but as the water has speed restrictions, for the most part, this isn’t particularly bothersome. It would also go against the ethos of complete relaxation that this sort of trip is meant to offer. 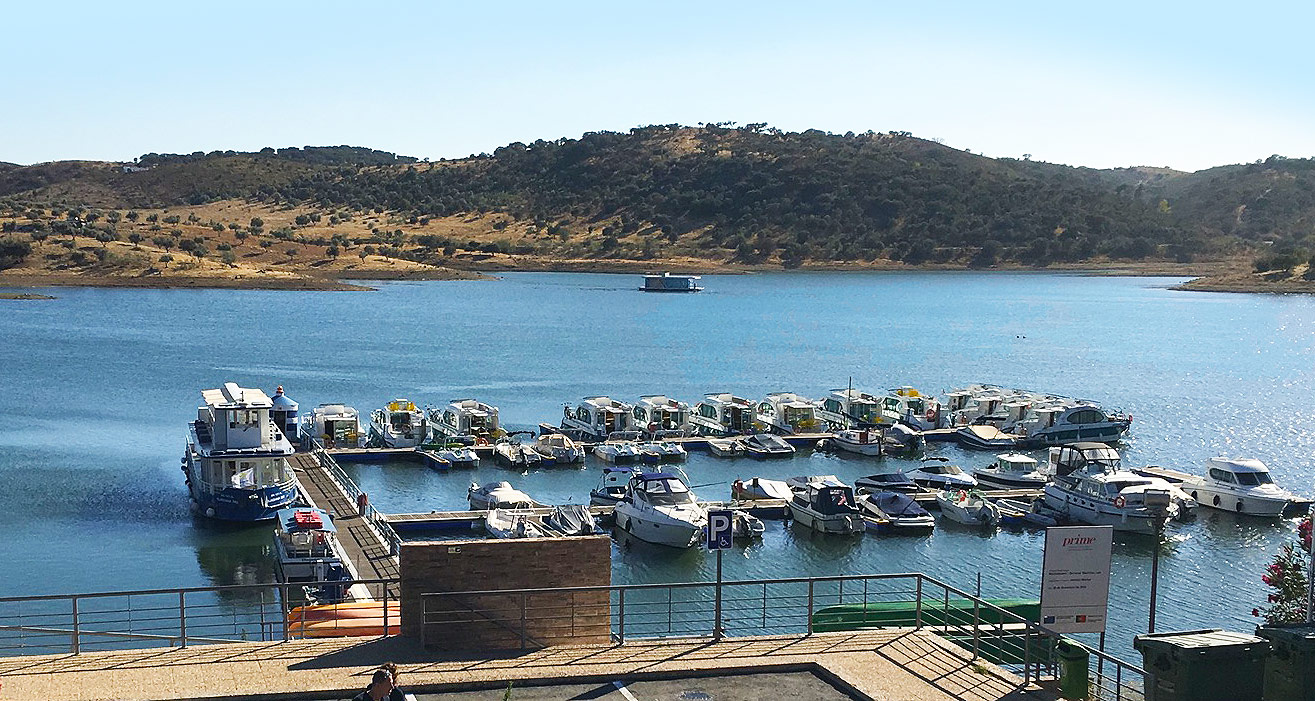 As we prepare to set off on the first day, the lake is clear and quiet with the only disturbances in the water being the gently bobbing bottles that the local fishermen use to prop up their lines in the open water. The stillness made for ideal conditions for our group of journalists, none of whom had ever driven a powered boat like this before.

We stocked up on food from the excellent ‘panoramic restaurant’ sitting atop the hill by the Amieira Marina, which provided us with a selection of locally sourced food to suit all palettes, with a varied menu to suit all tastes, from juicy steaks to the slightly out-there pigs trotters, though all food was excellent and vegetarians are catered for too. Local wine can also be provided; this part of Portugal is well known for its wine production so it is best to leave the duty-free alone at the airport and wait until you get to the marina itself or local towns to buy your tipple. 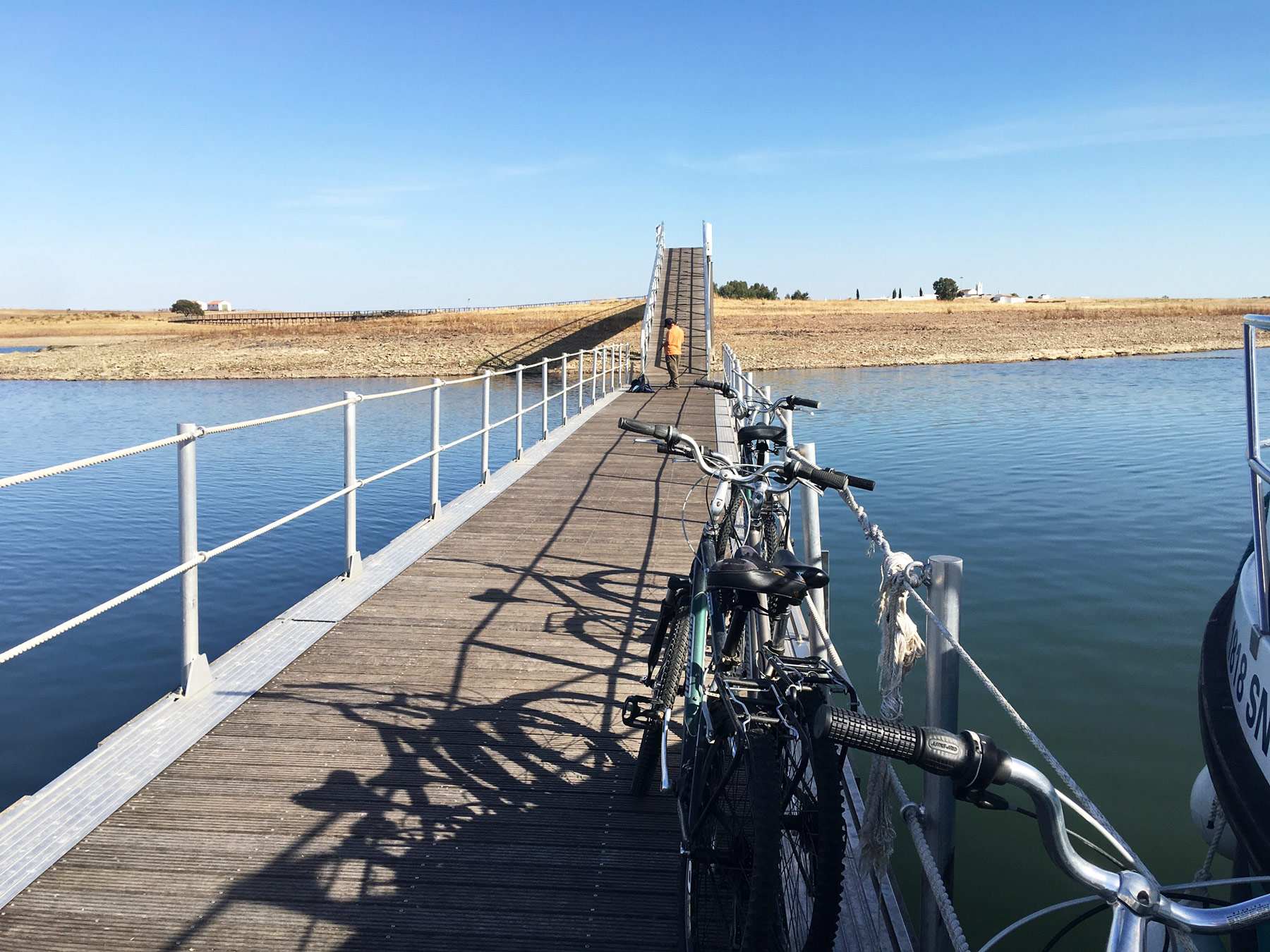 After some helpful instruction on the basics from a local who works at the Marina, we all set-off, nearly all of us going in the right direction. An easy to use and read GPS device is provided on all boats to show safe routes and a depth gauge tells if you are heading into too shallow waters. Even those who had never driven a car before acclimatised quickly to the steering and general controls of the boat.

Other useful provisions on the boat include a fully equipped kitchen with gas stove, a gas BBQ for the deck, radio with USB capabilities, and bicycles for getting around when you are on dry land. All boats are also lockable, so your belongings are safe when you disappear for your various escapades around the lake. 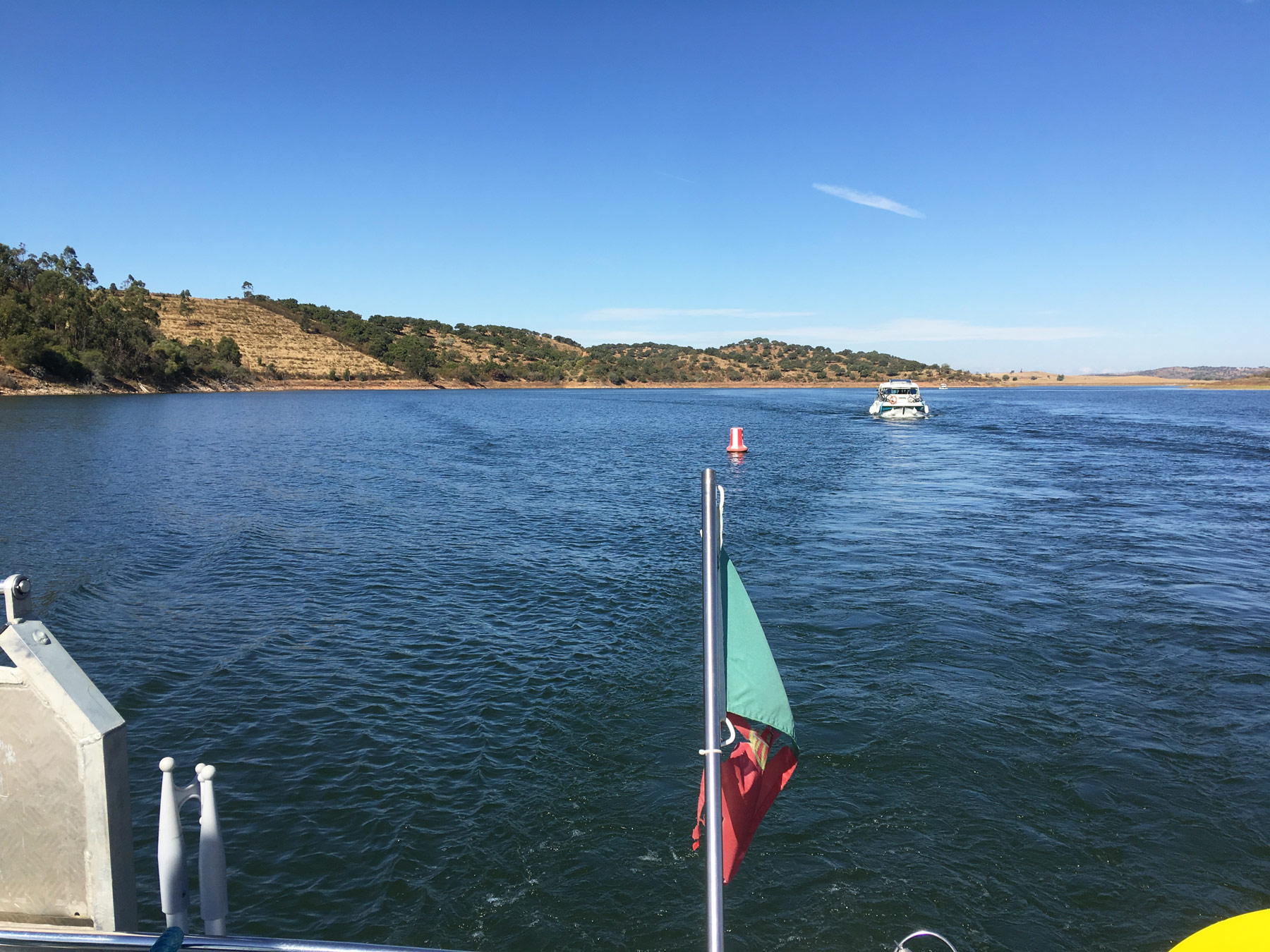 We were guided around the lake to see all of the notable towns in the vicinity, each providing its own unique character and attraction to any visitor, though a map is given to anybody who rents one of the boats and the routes around the lake are already built into the GPS to make it as easy as possible. Each of the villages and towns is worth a visit depending on the duration of your holiday, even if only for a coffee or a glass of wine. Every place bar none has some stunning architecture to take in. The most notable and memorable town on the trip for me was Monsaraz. 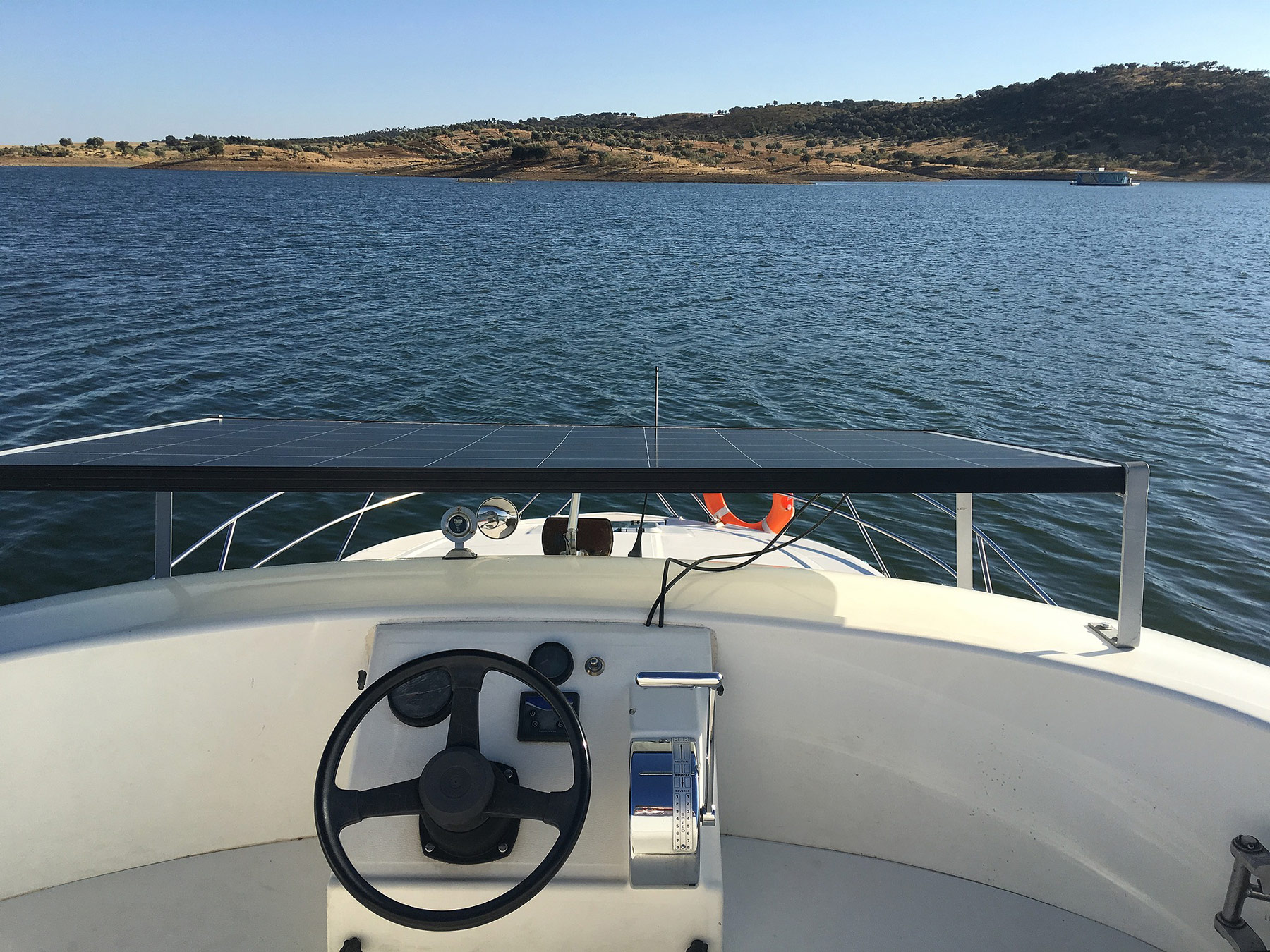