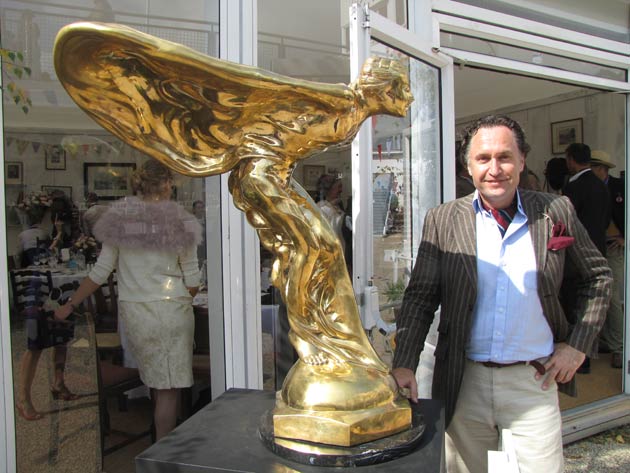 It was clear, even at breakfast, that the Goodwood Revival was going to be no ordinary motor racing event.

The restaurant of this lovely hotel was full and buzzing with elegant guests in 1930s and 1940s dress, who included Italians and Americans and the talk was of brake linings and carburettors. After an, extremely good, full English we ventured out into the car park which was filled with the roar of veteran engines and the sounds of attempts to start a 1960s recently restored Aston Martin DB5, ‘UFO 5’. 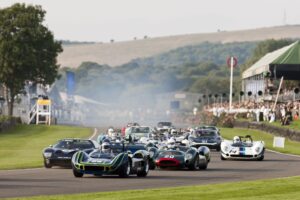 As we left the car park the now successfully started DB5 and a 1928 Bentley 4.5 litre tourer, NF8943, pulled in front of us and, trusting that they knew the way to Goodwood, we followed them down lush green lanes towards Chichester. We lost them somewhere in Chichester and followed the signs to Goodwood home to the ‘secret’ headquarters of Rolls-Royce. It must be secret as there were no road signs to it until we arrived at the roundabout right outside the factory.

Once kitted out with our Rolls Royce sponsor’s guest passes, we were directed to the factory forecourt where about a dozen Ghosts, Wraiths and Phantoms with chauffeurs were waiting. We were directed to a waiting Ghost and driven to Goodwood where two young women dressed as 1940s soldiers snapped to attention and saluted us! Definitely, no ordinary motor racing event!

Another uniformed official opened the gate for us and we entered another world. The Goodwood motor racing circuit was teeming with thousands of people in every imaginable ‘fancy dress’ from the 1940s to the 1960s. There were ‘spivvy’ suits, mechanics in oily overalls, teddy boys, many more uniforms and polka dot dresses and head scarves galore. We were directed to the pit lane and the Rolls Royce pavilion, immediately behind the pits. 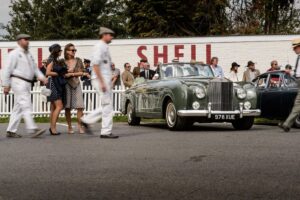 Rolls Royce had a large pavilion designed with a sense of fun in a seaside beach hut style and filled with retro knick knacks including boys own adventure books, a toy yacht, old crockery, walking sticks and a fold-up deck chair. It seemed like the scene for a ‘Ripping Yarn’ and I even think I saw Michael Palin wearing a knotted hankie and tank top.

The Goodwood Revival is a very British celebration of motorsport straight from an old Corgi catalogue, with a cast of many thousands, including fans, drivers, enthusiastic overseas visitors, eccentrics, history buffs and those who like a good excuse to dress up, get buried in sand on a beach and eat candy floss. The Goodwood Revival site grew out of RAF Westhampnett, a satellite airfield for RAF Tangmere which was home to two Spitfire squadrons, nos 145 Sqn and 602 Sqn during the Battle of Britain.

As one of the main sponsors, Rolls-Royce Motor Cars had a prime location, immediately behind the pits. This afforded views of the cars flashing past, activity in the pits and importantly the regular parade through the pits by the Goodwood Grid Girls. Sir “Jackie” Stewart, three-time world drivers champion at Formula One, was seen walking past several times too. 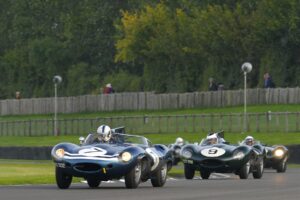 The weekend saw 15 very competitive motor races take place with everything from a 1931 Bugatti type 54 to a 1969 Porsche 911. Surely the most unusual was the very first, the Settrington Cup, a race for Austin J40 pedal cars of a type raced between 1949 and 1966.

Celebrity contestants included Rowan Atkinson, the Mr Bean and Blackadder star, racing a 1965 Ford Falcon Sprint in the Shelby Cup, in which he unfortunately, crashed out of the race after hitting a spinning car ahead of him. Jochen Mass, former Formula One driver raced a 1955 Studebaker Golden Hawk in the St Mary’s Trophy. Mark Blundell former Formula One driver raced a Ford Zodiac MkII and Tiff Needell, former racing driver and Top Gear presenter, raced a 1954 Jaguar MkVII. Derek Bell former five times winner of the Le Mans 24 hours raced a 1956 Jaguar D-Type in the Lavant Cup. Nigel Williams, Formula One world champion, raced a 1962 Lotus-BRM 24 in the Glover Trophy.

The Goodwood revival is not just about motor cars, after all, it did start life as an aerodrome, so it is only fitting that there is a quality historic aircraft flying display and static aircraft display area. 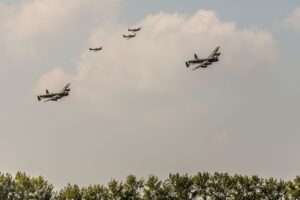 Highlights of the flying displays were the only two airworthy Avro Lancasters still flying in the world, reunited in British skies for the first time since 1964 and a Canberra. The Lancasters were the RAF Battle of Britain Memorial Flight’s PA474 and the Canadian Wartime Heritage Museum’s FM213. Canberra PR9 XH134 is the only flying example of its type in the world. In an overall silver finish the English Electric Canberra made a very evocative sight in formation with two silver Hawker Hunters, all from the Midair Squadron.

The Goodwood revival is also known for its Parades which this year included a parade of significant cars from Sir Jackie Stewart’s racing career, a Jaguar D-Type parade, a Maserati 250F parade and a special parade of 100 WWII vehicles and 400 people. The military vehicle parade included a large number of Willys Jeeps driving WWII veterans around the circuit.

My colleague Emma Gray and yours truly even managed to get in on the action in the Course Director’s entourage of historic cars which ventured out onto the circuit for a sedate lap on a few occasions over the weekend. 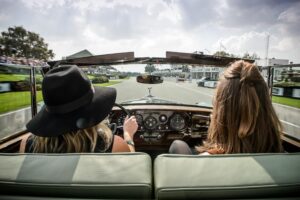 Rolls-Royce was represented in this entourage, with a beautiful 1961 Rolls-Royce Silver Cloud II Four Door Cabriolet in Smoke Green, with bodywork by H.J. Mulliner. Emma and I were conveyed in period luxury, with the silence of the ‘magic carpet ride’ only marginally disturbed by the ticking of the clock. The car is the only model of its type in the world and was very kindly loaned for the occasion by a customer of Rolls-Royce Motor Cars. Apparently, the car had only recently been bought and was loaned back to Rolls-Royce for the Goodwood Revival.

Our wonderful weekend at the Goodwood Revival ended as it had begun with a chauffeur driven ride in a Rolls Royce back to the factory and back to the real world of my old BMW! Many thanks to Rolls-Royce Motor Cars for an incredible experience. This long-time aircraft enthusiast is well and truly hooked and will return!