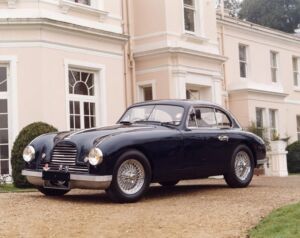 Details of the Aston Martin DB2 Coupe were released to the Press on April 12, 1950 and was shown as a production car at the New York Motor Show on April 15-23.

The Aston Martin DB2 Coupe followed the 2-litre sports chassis design in many ways but was 9 inches shorter in the wheelbase. The body itself was the work of designer Frank Feeley and was built around a square section tube frame on which an aluminium body was attached. The new Aston Martin DB2 Coupe engine was designed under the guidance of the great W.O.Bentley.

The Aston Martin DB2 Coupe was available in both Coupe and Drophead Coupe. The engine had twin overhead camshafts, hemispherical combustion chambers, a stroke of 90 mm and bore 78 mm giving a capacity of 2580 cc.

In standard form, power output was 105bhp. A 125bhp Vantage version was later offered. The Aston Martin DB2 Coupe is known for its superb chassis, great performance, and an immense amount of character.