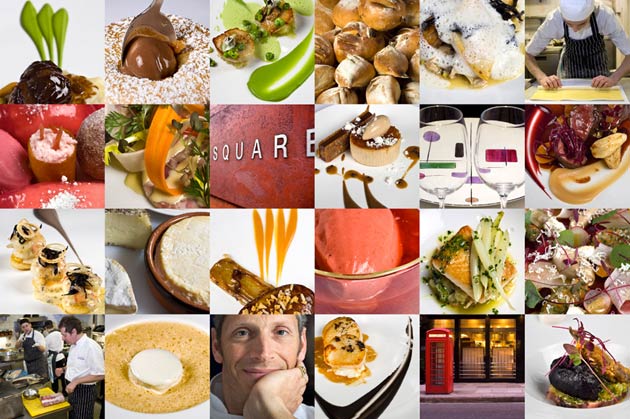 We arrived at this double Michelin starred restaurant with eager anticipation and curiosity. With Philip Howard as chef and co-owner of this upmarket Mayfair establishment, we had heard nothing but high praise for the culinary talent that he has brought to British fine dining with modern French food. 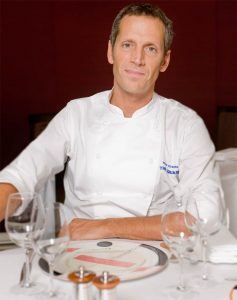 If you’re not familiar with Philip Howard’s great accomplishments, he is also the man behind another double Michelin-starred townhouse restaurant in Notting Hill called The Ledbury, alongside Nigel Platts-Martin and with his former Sous Chef Brett Graham. His third and fourth London restaurants, Kitchen W8 (which has one Michelin star) and Sonny’s Kitchen are in partnership with Rebecca Mascarenhas. He was also recently one of the winning finalists on the BBC’s Great British Menu.

To get in plenty of variety, we decided to opt for the seasonal tasting menu – nine courses, each one cleverly and carefully well thought out to complement the previous and the next.

Since The Square’s doors opened back in 1991, Philip Howard has managed to stay current with his menu but still hold on to the heart of what drove him to this unequivocal success. Our host informed us that the sautéed langoustine tails (our fourth course on the tasting menu) have been on the cards since inception and is still one of the most popular dishes served at The Square today. We couldn’t wait to tuck in.

First, the autumn minestrone broth with a beautifully slow cooked quail egg and a miniature tarte fine of savoury onions and cepes to add a sharp-sweet contrast to the soupy flavour. Then, a refreshing ocean-spray, with rillette of smoked Cornish mackerel with vinaigrette of Poole prawns, oysters, seawater jellies, cucumber and caviar. 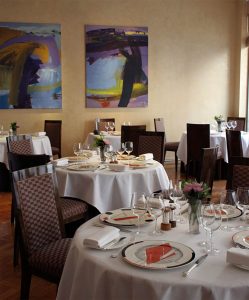 Our sommelier, a clearly consummate professional, presented us with fine wine pairings for each dish. Our favourite was the Mád Tokaji Furmint, 2011 – a Hungarian white that worked fantastically well with our aforementioned fourth course – sauté of Scottish langoustine tails with Parmesan gnocchi and a potato and truffle emulsion. It certainly hit the spot.

Course number five was fillet of turbot with autumn truffle and walnut pesto with a smoked celeriac and bay milk puree, followed by a well-presented breast of grouse with turnip and celeriac, pearl barley, pancetta and blackberries. For those not keen on game, diners can choose the fillet of beef with smoked cream potato, cepes and red wine. The Square can also cater for anyone who is vegetarian.

Our cheese course continued our epicurean feast, with a bite of Beaufort and an ultra creamy pot of Stinking Bishop served with crispy thins. Our key favourites were the desserts – Brillat-Savarin cheesecake with mango, passion fruit and lime and the melt-in-your-mouth finale, plum soufflé with almond ice-cream.

The Square had already won us over but for the sweetest send-off, we were presented with a colourful display of jelly candy lollipops – vanilla coated mini apples, hibiscus-infused jelly covered pineapple pieces and more. A plate of candy-popping truffles sent us out on to Bruton Street satisfied and in full agreement with the two notorious stars hanging on The Square’s name.

For those who wish to try out Philip Howard’s recipes at home, check out newly published The Square, The Cookbook: Savoury – the first volume of his debut food bible on learning the basics, plus recipes for soups, salads, fish and meat dishes and more. It teaches you how to rustle up various meals, giving you invaluable lessons on timing things right when in the kitchen. 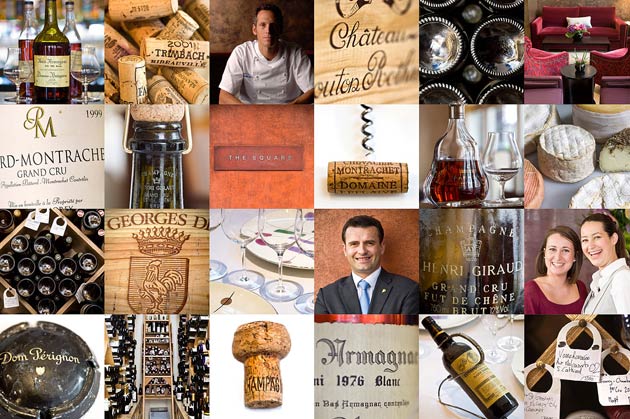