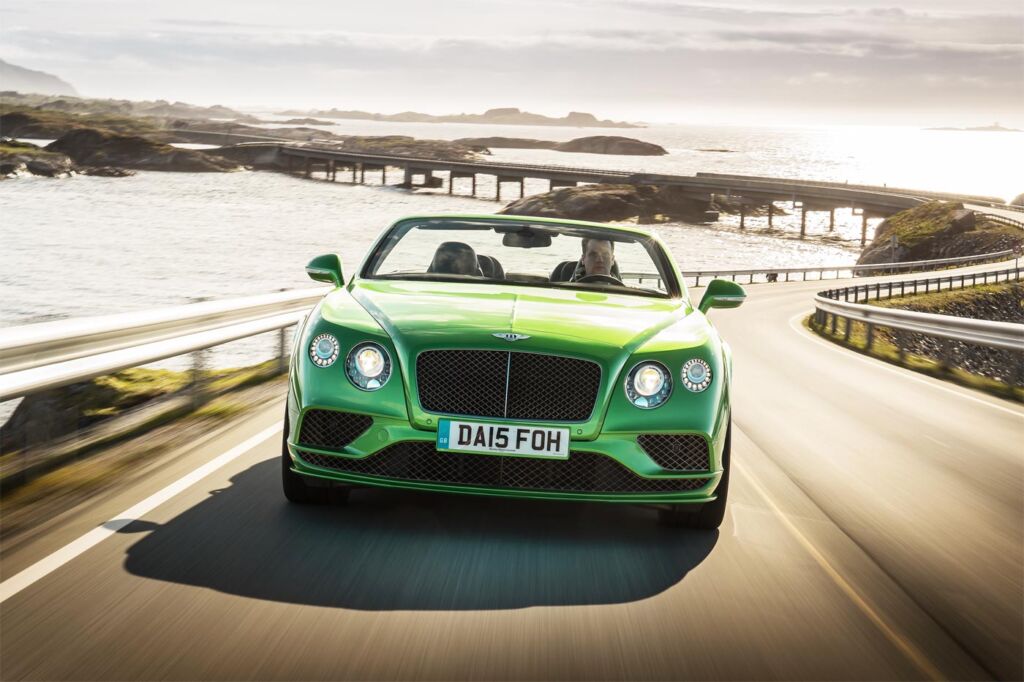 Paul Kinsley joins Bentley Motors in Norway to put the all-new Bentley Continental GT line-up to the test on some of Europe’s most dramatic roads.

Bentley’s history goes back to London in 1919 with two brothers, Walter Owen Bentley and Horace Millner Bentley. It soon found its place in the production of beautifully crafted vehicles and was identified as such when purchased by Rolls Royce in 1931. Bentley then became one of the world’s leading brands for the manufacture of luxury cars.

The Continental itself started off life in 1952, when the Type R Continental arrived. This model was not only recognised for its sumptuous lines and handmade interior, but also for its 120 mph top speed, something not seen in any other luxury vehicle of its era. Following the purchase of Bentley by Volkswagen AG in 1998 several years later, the brand saw significant changes including the launch of the brand new Continental line-up in 2003, immediately transforming Bentley, and felt by many as a transformation from old to new.

This was the first car to be released under the new ownership and was designed to cater for a significant increase in supply. The Continental GT (Grand Tourer), has since become the best-selling Bentley model of all time.

The latest edition of the Continental range took us to the scenic beauty of Norway. We arrived at Alesund Airport where we were transported to three Squirrel helicopters, the only way to fully absorb and appreciate the route that we would be taking on our return. The breath-taking background to our road trip could only be experienced by air during the 30-minute flight.

The destination was the grounds of the Storfjord Hotel, situated amongst lush green forest and mountains, divided by a huge waterway by the name of the Geiranger Fjord. 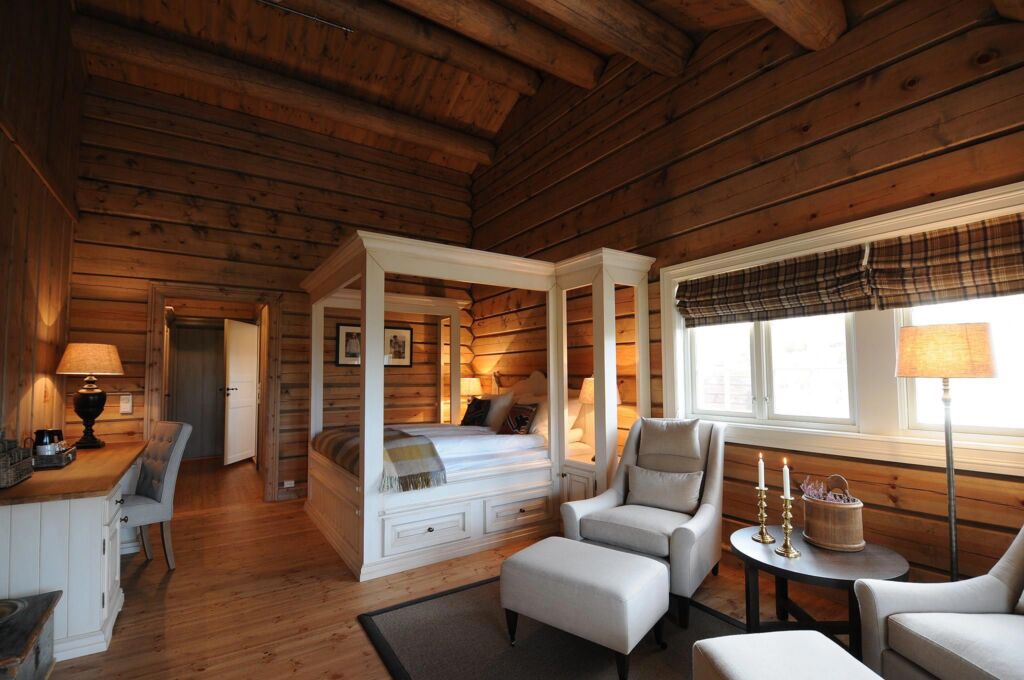 The hotel appeared to be recent in build, and almost invisible in its surroundings. Originally built in 2007, it looks older than it is, designed to blend into the wooded environment. Crafted by local hand, the wood has been chiselled to perfection and finished to a very high standard, with the rooftops insulated with grass. This is an ideal location if you are looking for the ultimate in peace and tranquillity.

Eight Continental GT models in a selection of striking colours awaited for our 230-mile journey back to Kristiansund Airport, made up of coupe and convertible models, and V8 and W12 engine variants. Taking a scenic route through this superb location, made up of long straights, tight turns and hairpins across a range of mountains, the roads proved to be the perfect testing ground for the exceptional handling and performance of the Bentley Continental GT. 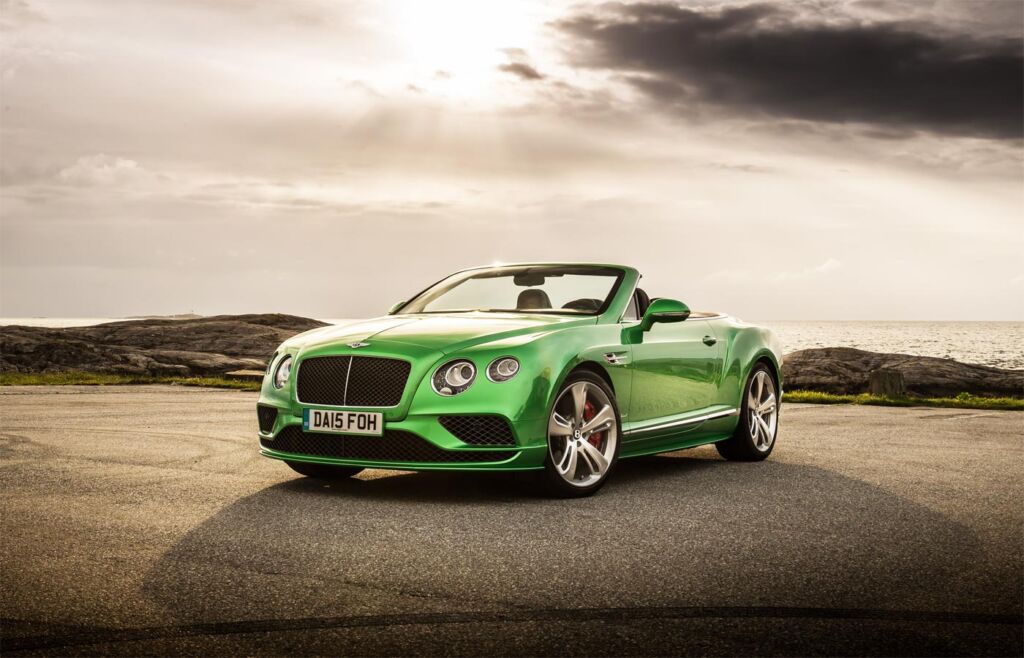 Approaching the new GT Speed Convertible in a striking Apple Green paint, there were some obvious updates. These took the form of a new front bumper which reduces the size of the radiator grille and aids the assertive appearance. There are a variety of new wheel options available on all models, with some unique designs including a 21” five-spoke directional painted alloy. 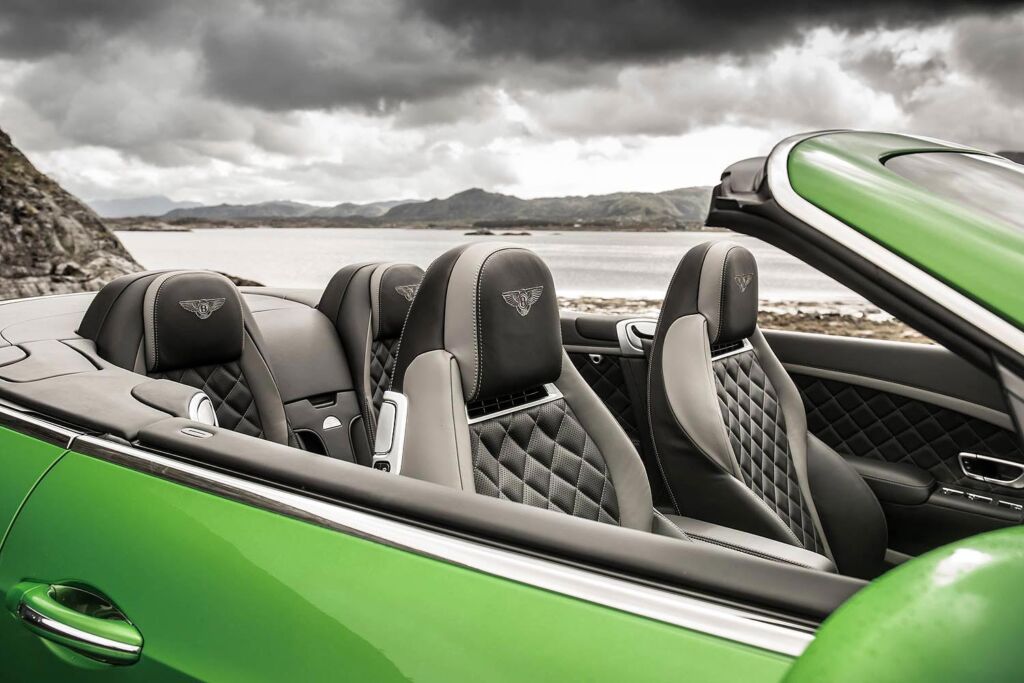 In the cabin, you are greeted by a smaller diamond quilting pattern, and if the hide isn’t to your preferred comfort, there is now an option of a softer semi-aniline hide, the highest quality of leather available to the motor industry. The seating position literally feels like the car is giving you an expensive cuddle, with adjustments that will suit all.

The hand-crafted dash retains its classic feel with new dials and graphics neatly encased in chrome surrounds, illuminated with LEDs, buttons and switchgear to leave a very positive feel. There is now the option of a new ergonomic sports steering wheel with larger gear shift paddles, the underside embossed to give a more positive feel. Coupe models also benefit from an Alcantara roof lining which is matched to the vehicle’s interior. 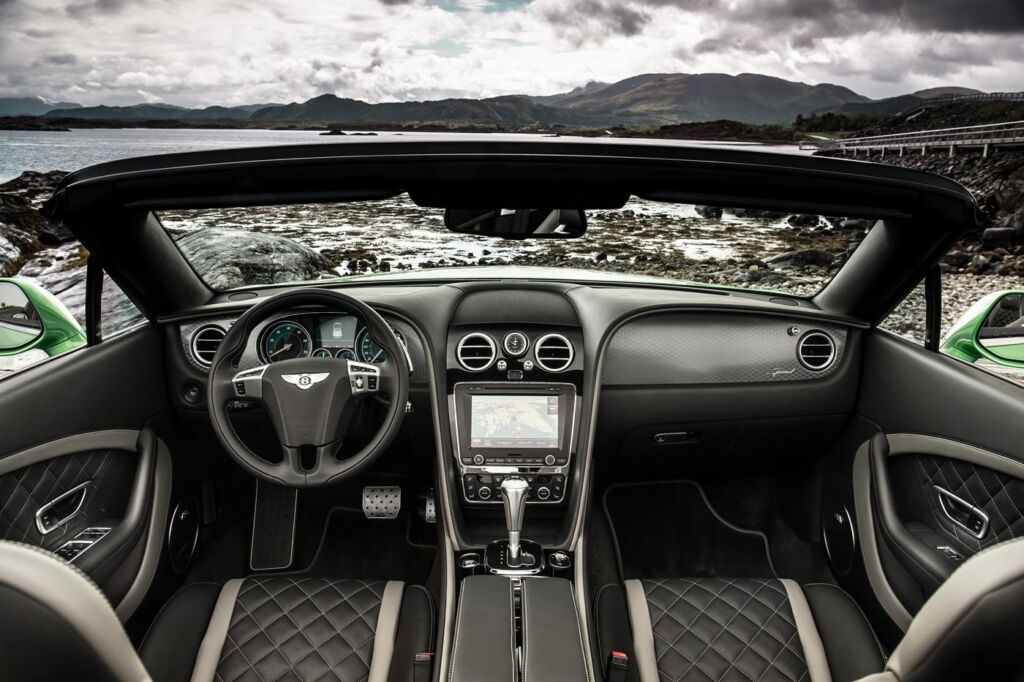 The close-ratio ZF eight-speed automatic transmission harnesses the increased torque and power delivered to all four wheels. The gearbox also makes a significant contribution to the fuel efficiency and CO2 emissions of the W12 models. You feel the immense power as you feather the accelerator and sample the 6.0-litre twin-turbocharged W12 engine note as it exits the exhaust, a sound that certainly won’t disappoint.

It really does stir the adrenaline and focuses the eyes as you accelerate from 0 to 60 mph in just 4.1 seconds. With 635 PS on tap, this really is a supercar (it has a top speed of 203 mph!). While on the outside this car appears to be a large vehicle, and is, driving the Bentley Continental is quite different. The steering is direct and responsive, supported by the four-wheel-drive system. Short bursts on the throttle literally pin you to the back of your seat, but driving the new Bentley really will fill you with confidence.