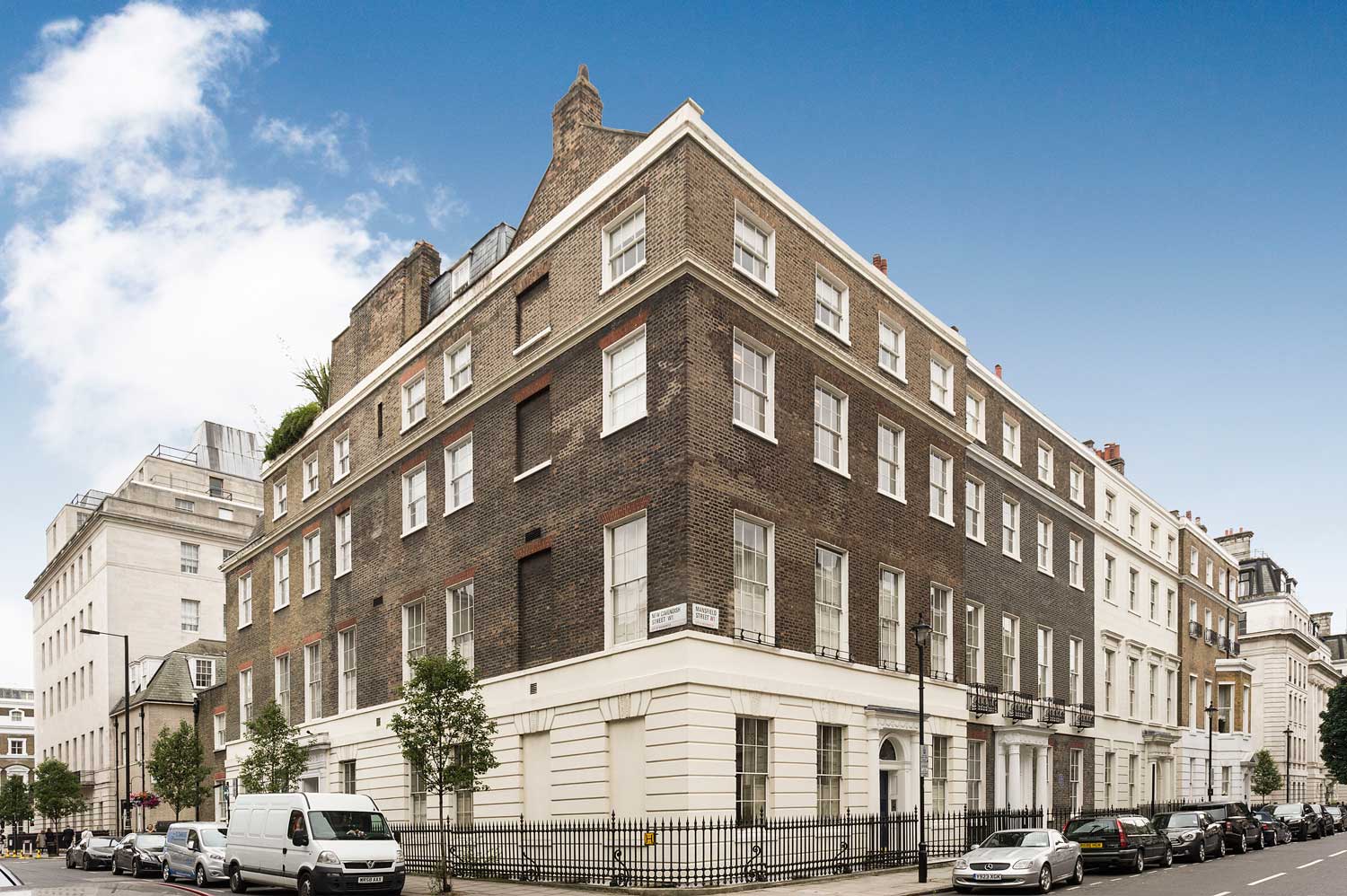 A wave of new development has created a three-tier resi-market in London’s Marylebone says new Beauchamp Estates report. Luxury new build and fully refurbished properties are the most sought after.

Marylebone has been transformed by a wave of new residential development, providing over 450 new homes, which has created a three-tier property market in the urban village says a new research report by ultra-prime estate agent Beauchamp Estates. The three-tier market consists of second-hand property, new/newly refurbished homes and luxury residences, each having their own distinct buyer profile and price performance; with more homes in the development pipeline.

The 202 acres of Marylebone contains over 22,000 households, bordered by Edgware Road to the West, Oxford Street to the South, Great Portland Street to the East, and Regent’s Canal and Park to the North. Originally developed between 1715-1820 and 1890-1910, the second-hand property sector consists of Georgian and Victorian terraces, a few squares, and Edwardian mansion blocks, largely located between Baker Street and Edgware Road to the West and Thayer Street and Great Portland Street to the East.

The Beauchamp Estates report reveals that second-hand and newly refurbished homes in Marylebone typically sell for £1.5 million, up from £1.4 million in 2013, achieving an average of £1,581 per sq.ft. These homes predominantly sell to UK domestic and continental European buyers, with newly refurbished homes also appealing to some Middle Eastern purchasers. 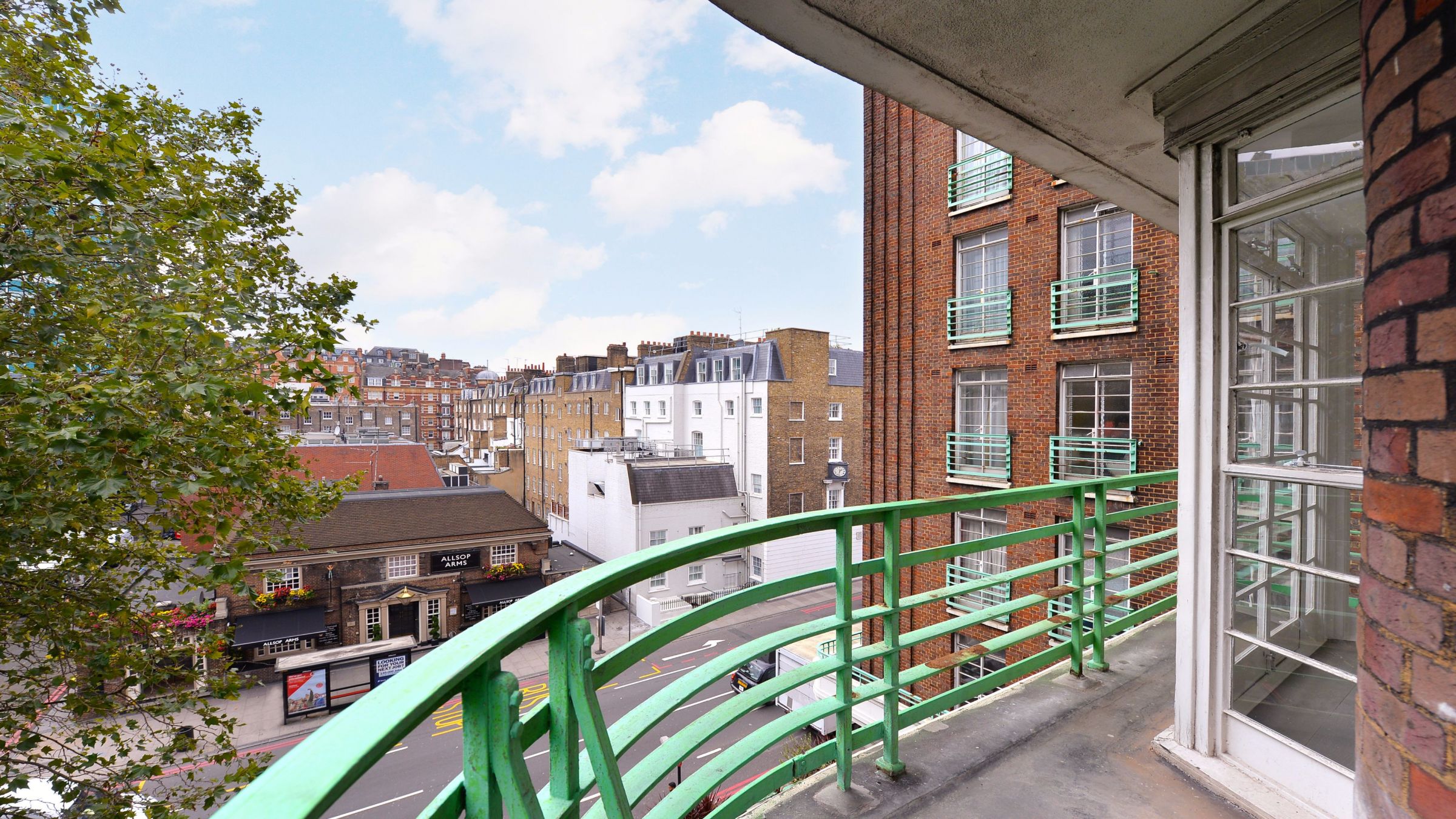 Since 2011, 459 new homes have been built or are under construction in Marylebone, with another 768 in the planning pipeline. The report mapping indicates that this wave of new residential development has largely taken place in just four locations – Chiltern Street, Marylebone High Street, the edge of Regent’s Park and the border with Fitzrovia. The report reveals that new homes typically achieve £2,000 to £2,500 per sq.ft, a significant price premium when compared with second-hand transactions.

Beauchamp Estates reveal that in the last two years a new ultra-prime sector has emerged at the top end of the Marylebone residential market. This new market consists of a collection of recently built, highly exclusive, luxury residential developments, benefitting from hotel-style concierge and leisure facilities, which command values of £3,000 to £3,500 per sq.ft.

Examples of these new luxury residential projects are The Chilterns (44 apartments) by Frogmore/Galliard; Chiltern Place (56 apartments) by Ronson Capital and The Park Crescent (12 apartments) by Amazon Property. Completed in 2016 and 2017 respectively, The Chilterns and Chiltern Place homes have sold for an average of £3,069 per sq.ft (£6.2 million) and £3,343 per sq.ft (£5.9 million) respectively. The Park Crescent has sold for £4 million to £18 million, at values of £3,500 per sq.ft.

Purchasers in Marylebone’s luxury residential projects have been a combination of affluent British downsizer families and wealthy overseas buyers, mostly from the Middle East, and some from Asia: most buying for owner occupation. Beauchamp Estates observe that the provision of these luxury homes has enabled Marylebone to join adjacent Mayfair as one of the capital’s most highly sought after addresses.

It is because of the spectacular growth of the new homes and luxury development sectors in Marylebone that Beauchamp Estates recently launched a new Marylebone office on the corner of Marylebone High Street headed by directors Alex Bourne and Richard Douglas. Bourne and Douglas are local Marylebone experts, having been based there under their previous Hanover West End brand for the last four years and successfully selling over £250 million worth of Marylebone and wider Prime London property before joining Beauchamp Estates. 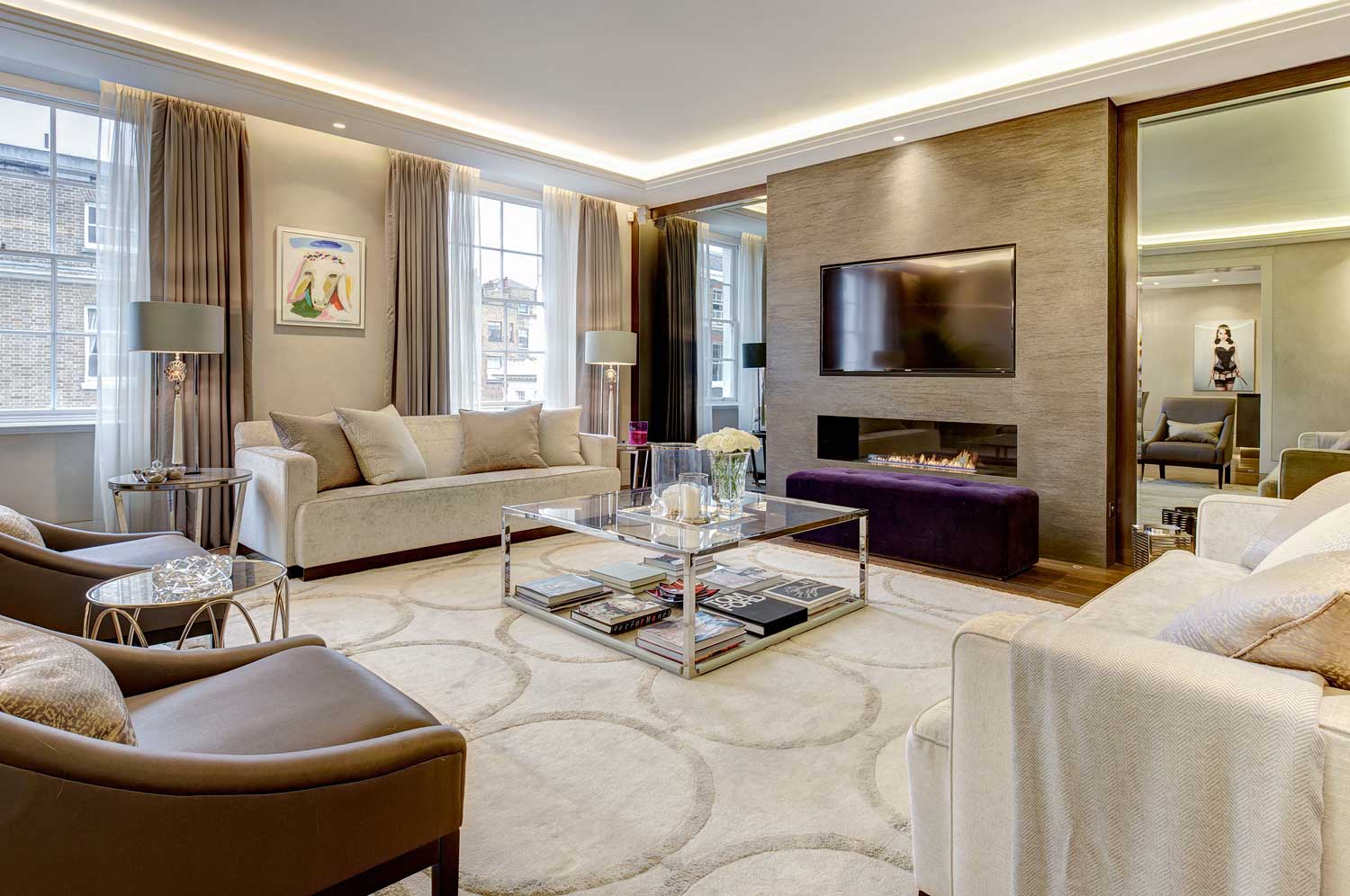 Beauchamp Estates says that whilst the annual volume of sales in Marylebone has declined from 457 in 2015/16 to 300 in 2016/17, and prices for second-hand stock have recently dipped by -2.3%, there has been a “flight to quality”, with ultra-prime buyers now showing a significant preference for newly built, luxury or newly refurbished homes. Hence the strength of the new homes market and the price benchmarks for the area set by The Chilterns, Chiltern Place and The Park Crescent. 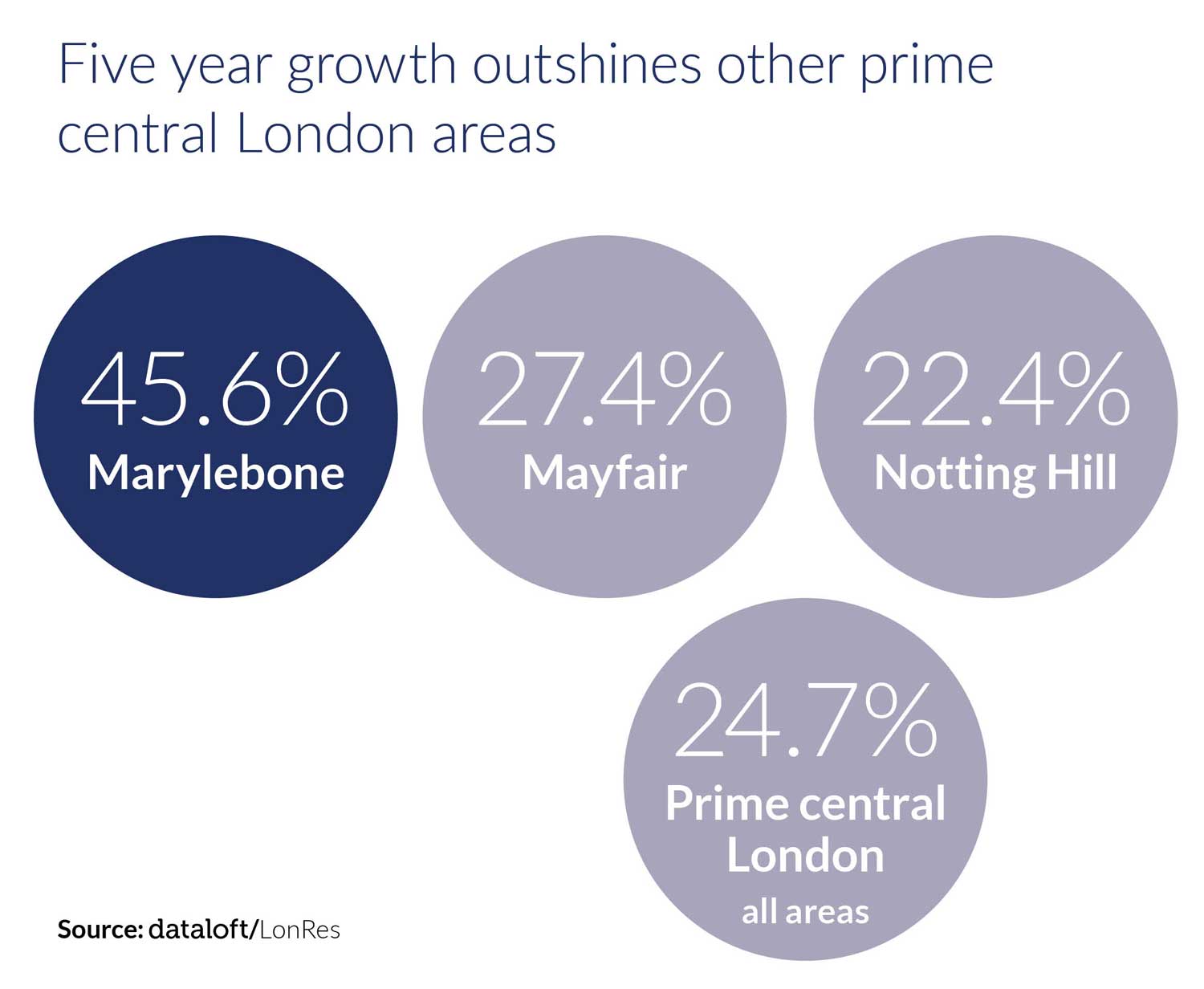 Marylebone’s ongoing development looks set to continue observes the report. In 2018 rail and underground connections for Marylebone will increase with the opening of the new Elizabeth Line (Cross Rail) stop at Bond Street in December.

There are also a number of new premium developments under construction and due to come to market. On Marylebone High Street is W1, which will provide 19 apartments and five townhouses, with prices at between £1.9 million and £12.5 million.

On the border of Regent’s Park, there will be the new ultra-prime residential development, The Regent’s Crescent by PCW Property, which will provide a collection of 76 luxury apartments, including penthouses. Adjacent to The Regent’s Crescent, developer Amazon Property are due to launch a brand new collection of homes under their Park Crescent brand. Both projects are anticipated to set new price benchmarks for the Marylebone market.

On the border of Marylebone, in neighbouring Fitzrovia, is Rathbone Square, providing 142 private apartments, where values have averaged £2,365 per sq.ft (£3.3 million). The report highlights that if Fitzrovia’s development pipeline is combined with Marylebone’s there are now over 1,277 new homes in the local new homes pipeline. Fitzrovia’s Fitzroy Place, on the eastern border of Marylebone, is one of the largest new developments in the locality in over a decade, providing 237 apartments, of which 236 were sold prior to its 2016 completion at values averaging £2,133 per sq.ft (£3.4 million).

Gary Hersham, Managing Director of Beauchamp Estates says: “Marylebone has become one of London’s most fashionable neighbourhoods, mixing beautiful period architecture with stunning new developments. The new homes market in Marylebone has developed since 2011, with the ultra-prime luxury sector only emerging recently in the last two years. The growth and success of the new developments market have enabled Marylebone resi-value growth to outperform both Mayfair and PCL overall over the last five years.”

Alex Bourne, Co-Director of Beauchamp Estates (Marylebone office) says: “Premium retail and leisure provision have been the two key features that have helped to drive the area’s repositioning. Marylebone High Street and Chiltern Street, in particular, have seen an influx of fashionable new clothing boutiques, smart cafes, the new BXR Gym – whose members include sporting icon Anthony Joshua – and of course the new 5-star Chiltern Firehouse Hotel and restaurant, which is so popular with A-list celebrities. Together these facilities have made Marylebone a really cool place to live and hang out.”

Richard Douglas, Co-Director of Beauchamp Estates (Marylebone office) says: “Over the next 14 months, a series of exciting new developments will be coming on-stream around the High Street, by Regent’s Park and on the border with Fitzrovia. Projects like The Regent’s Crescent and W1 will help to drive capital values and attract a fresh wave of high-net-worth buyers to Marylebone. Census data shows that the population of Marylebone has grown by 17% in the last 10 years and this is being facilitated by the thriving new developments sector which has created hundreds of new homes in the locality.” 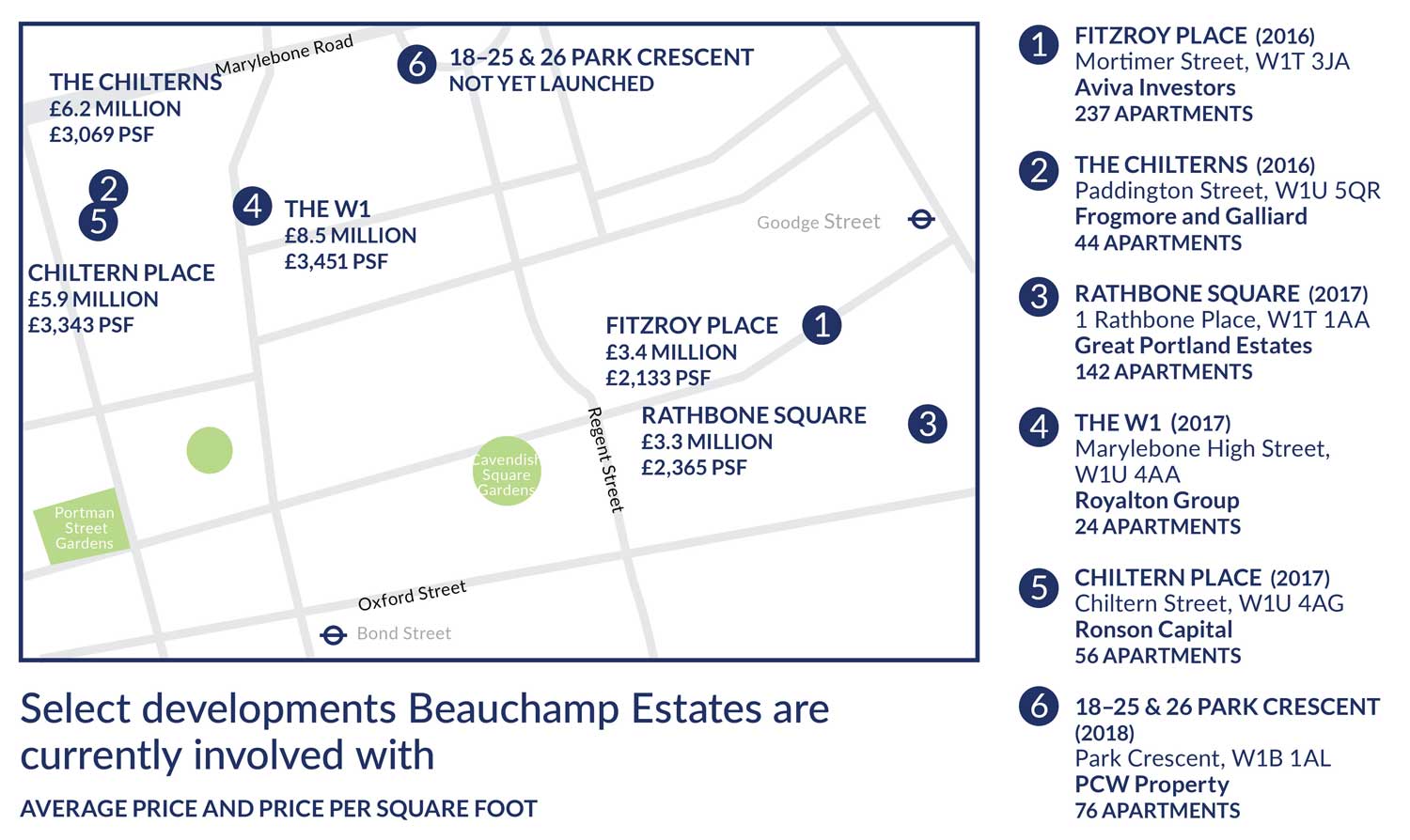