Montblanc has unveiled two Artisan Edition Pablo Picasso Limited Edition writing instruments in tribute to the Spanish painter, draughtsman and sculptor, and one of the most famous figures in 20th Century art.

Pablo Picasso, born in Málaga in 1881, started to paint at the early age of seven and a mere two years later completed his first oil painting, “Le Picador”. It was the start of an unequalled artistic career whose beginnings got underway in his fatherʼs painting classes. Until his death in 1973 in Mougins, France, the artistic genius of the twentieth century produced more than 50,000 works ranging from drawings to ceramics and from poetry to sculpture and painting. These include the dove of peace and his most famous masterpiece, “Guernica”, which depicted the destruction of the city of the same name during the Spanish Civil War. It was displayed for the first time at the International Fair in Paris in 1937. 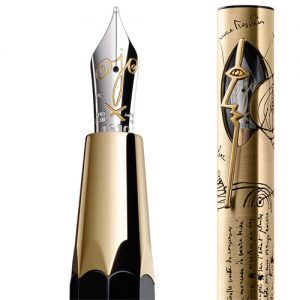 The Montblanc Artisan Edition Pablo Picasso Limited Edition 91, restricted to 91 pieces, and designed to honour Pablo Picasso’s lifetime achievements, is available at a price of £21,700.00 (including VAT), and features a cap made of 750 solid gold, an 18 carat gold rhodium plated nib decorated with an engraving of the famous Picasso drawing, the “Ojo”, as well as a barrel sporting lacquered red bands reflecting Picasso’s Spanish origins.

The second more precious fountain pen, the Montblanc Artisan Edition Pablo Picasso Limited Edition 39, which sports a Cap made of 750 solid white gold, and a Montblanc diamond set on the cap of the writing instrument, is available at a price of £35,300.00 (including VAT) in a worldwide Limited Edition of 39 units, honouring Pablo Picasso’s 39 paintings and drawings of his muse, Sylvette David.

The two Artisan Edition Pablo Picasso Limited Edition writing instruments can be purchased from Montblanc boutiques as of September 2012. However, due to restricted numbers, it is recommended that customers place their order before this date.