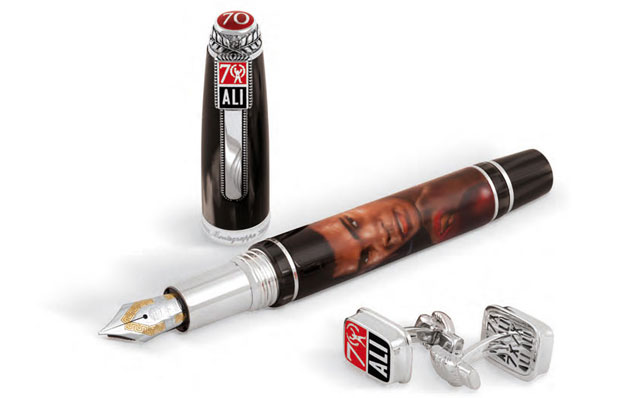 For those who remember the stellar arrival of a young Cassius Clay over 50 years ago, with Golden Gloves and Olympics successes, for the legions of fans who followed his professional career as Muhammad Ali, yet another milestone has been reached. Seared into the collective memory as the devastatingly handsome, truly iconic sportsman, Muhammad Ali has just celebrated his 70th birthday. 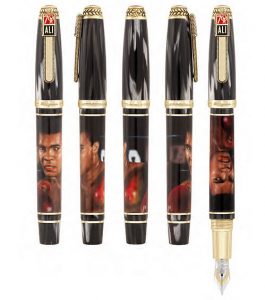 Montegrappa are delighted to released a series of pens honouring this greatest of boxers in 2010 and 2011, including a model commemorating the spectacular “Thrilla In Manila”, but this moment in Muhammad Ali’s eventful life brings a different, poignant joy. Montegrappa are delighted to announce the release of a special limited edition celebrating Muhammad Ali’s 70th birthday, which is a personal landmark rather than a professional one.

Their designers have created a work of art that they trust will observe the occasion in the most memorable way. The pen and accompanying cufflinks bear the official logo created by Muhammad Ali Enterprises for Ali’s 70th birthday, seen on the pen’s clip and the cufflinks’ face. It is a powerful red-and-black symbol in enamel, with the famous profile of Ali, arms raised in victory, framed by the “0” in “70”, the number positioned above the name: purely and simply, “Ali”.

The fountain pen is piston-fed and boasts an 18K gold nib with ebonite feeder. The pen barrel is painted and signed by artist, Lorena Straffi, who has created a handsome portrait of Muhammad Ali in his prime, with fists raised. The cap’s end-piece bears the number 70 in a field of red, surrounded by laurel leaves, above the birthday badge on the pocket clip. Another detail sure to delight the fortunate wearer appears in the folding back-clips of the cufflinks: they are shaped like miniature boxing gloves.

The Muhammad Ali 70th birthday collection will be offered as follows:

Each Muhammad Ali’s 70th birthday set is packed in a luxury wooden box.