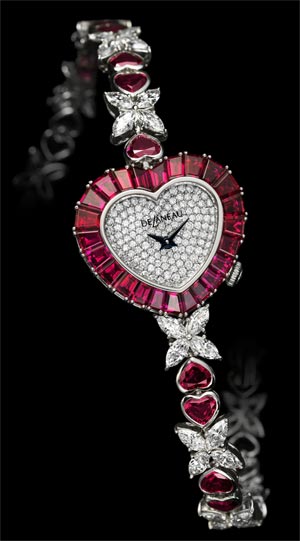 After a long and careful research within its archives, DeLaneau was drawn to the creation of the jewelry bracelet watch collection Les Délicates.

To transcend the brand’s universe, to materialize its essence in four emblematic pieces that refer to the history of DeLaneau, this is the aim of the new collection Les Délicates. Romantic, sparkling and precious, these bracelet watches are odes to poetry and gentleness. Taking the shape of a heart or a flower, they may also have a round or diamond shaped body.

Diamonds, rubies, emeralds, sapphires, and conveys even marvelous Paraïba tourmalines vibrantly illuminate the watch refinement and sophistication. Taking strength from their legacy, Les Délicates are a tribute to the brands’ jewelry as well as the demanding technique of a mechanical heart. Indeed, as with all DeLaneau pieces, Les Délicates are powered by a beautiful mechanical movement.

Both classic and contemporary, Les Délicates bestows elegance and femininity to its lady as if they had always belonged to each other. A precious and timeless piece, Les Délicates is already in the thoughts of every daughter who secretly wishes to inherit it from her mother.

Les Délicates are the celebration of 60 years of passion that combines horology and jewelry entirely and uniquely dedicated to women. It is an imprint of timeless exclusivity, refinement, and above all poetry.

The collection will be composed of twenty unique pieces, each one adorned with a different stone palette.

The DeLaneau Story
Bienne, Switzerland,1949, a period prone to creation & modernity, sees the birth of DeLaneau Watches. A few years later, in 1965, Swiss couple Rolf and Yolanda Tschudin become the new owners. Yolanda, the daughter of a sculptor, becomes one of the very few women active in the watch industry. She embraces the new codes of modern society and transcends them into her timepieces. Be it the growing importance of movies – many world renowned actress from Cinecitta and Hollywood – or other leading aristocratic ladies were all faithful to the brands ultra feminine wrist watches. From then on to this day, it was not just a watch but rather a unique luxury jewellery timepiece by DeLaneau.

Imaginative Mechanical Complications
Several decades later, in 1997, fate had another charismatic woman embrace DeLaneau’s destiny: Cristina Wendt-Thévenaz, the brands Creative Director and CEO. Coming from the world of interior architecture and design, she was introduced to watchmaking by a fortunate coincidence and immediately nurtured a true passion for this field. Discovering the beauty of century old techniques such as stone setting, engraving, enamelling or even miniature painting, Cristina empowered DeLaneau with ultra feminine aesthetics.

Beyond design, she also wanted to instill the art of mechanical watchmaking into her refined pieces. The very first Tourbillon specifically crafted for women was proposed by DeLaneau in 2002, followed by the truly original Angel Heart in 2008, a model which bears a dial with two wings that open to reveal a small second in the center….poetry at its best! Being an active woman herself, Cristina then thought of developing wrist watches with a mechanical movement that would reveal a function useful in every day life. Thus came along the 1608, a DeLaneau caliber featuring jumping hours and minutes – without hands – that allow a vast dial surface to be decorated by delicate motifs. Combining a simple display of time with amazingly original patterns crafted thanks to the Métiers d’Art the 1608 models – launched in 2009 – have immediately been greeted with success.