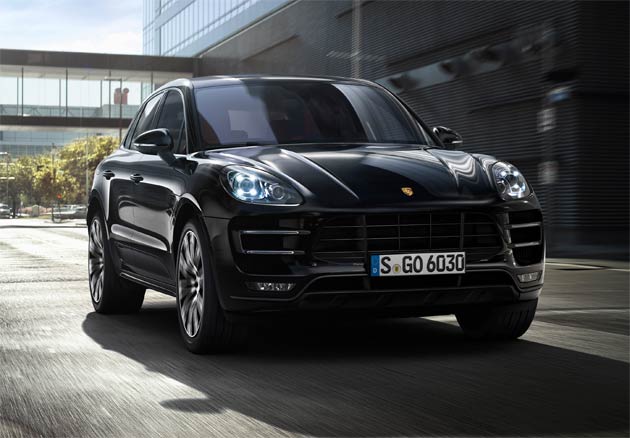 The Porsche Macan was formally unveiled at last year’s Los Angeles and Tokyo motor shows and is now built alongside the Panamera and the Cayenne at Porsche’s German €500 million plant in Leipzig. 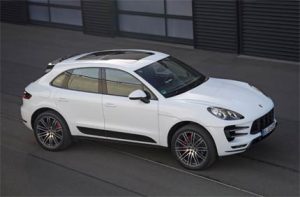 Taking its name from the Indonesian word for “tiger”, it’s the first time that the automaker has entered into the compact SUV segment. Deliveries began back in April 2014, and there are currently three Macan variants for sale starting with the base 340 hp S, followed by the highly popular Diesel and the range-topping Turbo which we drove.

The design of the Macan is based on Audi Q5’s architecture and is inspired by some of Porsche’s other iconic models, whilst maintaining the true sportscar heritage of the brand. For example, the sloping roof line is inspired by the 911, whilst the bi-xenon headlights and multi-function sports steering wheel are based on that found in the 918 Spyder. The Genuine Carbon side blades at the bottom of the front and rear doors are also reminiscent of the aforementioned hybrid.

The thin, but elegant LED lights are another stand out feature of the minimalistic rear, and the black diffuser is flanked on both sides by square twin tailpipes which give the Macan a more aggressive and sporty look. Our test car sat on the beautifully sculpted 21-inch 911 Turbo design 10-spoke alloy wheels (not standard specification) with 265 mm tyres on the front with slightly wider 295 mm rubber at the back. 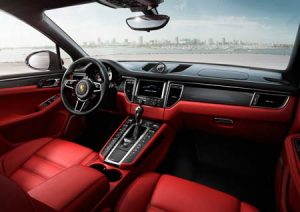 The Macan has all the gadgetry that you would expect for tackling rough terrain, which can literally be activated by pressing the ‘Off Road’ button on the centre console. Ground clearance can be increased by 40 mm above its normal level to a height of 230 mm as a result of the air suspension.

The sumptuous leather interior, which has a full-length panoramic roof, is spacious, as is the legroom and capacity of the boot (accessed via the powerlift tailgate) that stands at 500 litres. For the driver and front passenger, the heated sports seats with 18-way adjustment and Alcantara headlining are particularly comfortable and there are three individual memory settings so that any of the saved seating positons can be chosen any time that you get in the car. At the heart of the forward-sloping centre console is the high-resolution, crystal-clear, 4.8-inch VGA multifunction display which is the main interface for the crystal clear 14 speaker-545 watt BOSE Surround Sound audio system. Very intuitive, the screen also doubles up as the satellite navigation, reverse parking monitor and a live TV when specified (it costs another £1,028.00 for the privilege). For obvious safety reasons, the latter only broadcasts a picture on the screen when the vehicle is static, with the transmission converted into audio when on the move.

The sports steering wheel is light to operate with buttons fitted as standard for the telephone, radio and on-board computer. Ergonomically-positioned paddles allow you to move up and down the seven different ratios at your own pace. Furthermore, the sports car-inspired three-dial instrument cluster is also well designed and the far right hand multi-function display features a number of informative read outs including satellite navigation which is much easier to follow rather than having to always twist your head towards the centre console in order to browse the map. 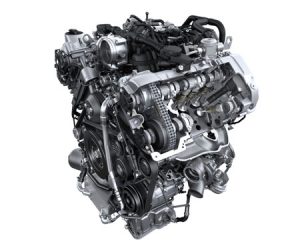 So what’s it like to drive? With 400 bhp on tap from the 3.6-litre V6 twin-turbo engine, the Macan Turbo is remarkably quick and there is certainly no lack of power. Weighing in at around two tonnes, it can be catapulted from 0 to 62 mph in just 4.6 seconds thanks to the option of the Sport Chrono package (fitted to our test model for an extra £728.00) which sees the addition of “Launch Control”, designed to mirror the experience of pulling away off the grid in a race. This is combined with a beautiful deep sounding growl from the four pot exhaust as you move up the high performance seven speed Porsche Doppelkupplung (PDK) gearbox which is extremely responsive and well configured. The ride is incredibly smooth apart from on more coarse surfaces where there is a little vibration coming through the tyres, much like we experienced with the Cayenne Turbo S last year. However, long-distance comfort is good as the Macan’s chassis is a combination of the steel spring design and the Porsche Active Suspension Management which effectively reduces the amount of body roll on any surface or during aggressive acceleration or braking.

There is also excellent stopping power to match whether in wet or dry conditions as the Macan brings the highest calibre braking system in its segment. To achieve this, the compact SUV relies on six-piston fixed-calliper front brakes with discs measuring up to 360 mm.

All-in-all, whether in the city or out in the open air of the countryside, the Macan Turbo is a very easy and versatile car to live with. A price tag of £67,000 when fully loaded with options is a premium to pay compared to what you can get with equivalent rival models, but spending the extra to have one of the very best compact SUVs on the market is definitely worthwhile.

Specification at a glance:

Click on an image below to see the Porsche Macan Turbo in more detail: