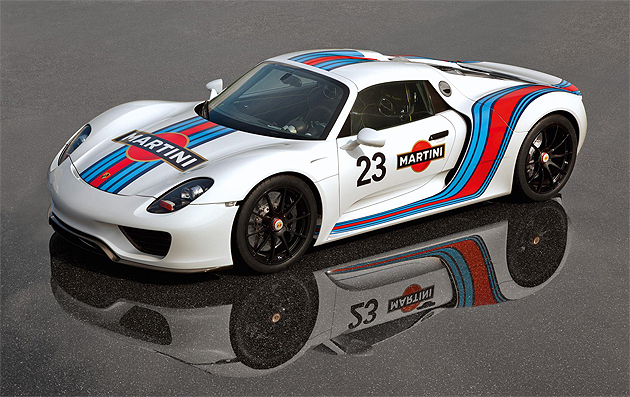 Driving trials of the Porsche 918 Spyder are continuing at high speed, and in the distinctive, sporting livery of Martini®Racing; made famous in the 1970s as the colour scheme of many successful Porsche race cars.

A fundamental element of the testing programme for the plug-in hybrid super sports car – as is the case in the development process of all Porsche cars – is the 20.8 km Nürburgring-Nordschleife race circuit. Indeed, a lap time of less than seven minutes 22 seconds around the challenging track in the Eifel region of Germany is one of the development goals of the 918 Spyder.

The Porsche 918 Spyder combines a high-performance internal combustion engine with electric motors on the rear and front axles to achieve extraordinary driving performance and excellent efficiency.

The combined system power of the drivetrain is 770 hp and the NEDC fuel consumption is forecast to be only around three litres per 100 km, equivalent to CO2 emissions of about 70 g/km. While the livery of the prototype is reminiscent of historical models, this advanced technology ensures the Porsche 918 Spyder is clearly a super sports car for the future.

The monocoque of the Porsche 918 Spyder is constructed from carbon fibre reinforced polymer (CFRP), which reduces vehicle weight and delivers remarkable rigidity and dynamic precision. Other highlights are fully variable aerodynamics, adaptive rear axle steering and the ‘top pipes’ exhaust system which routes the exhaust upwards at the rear of the car. 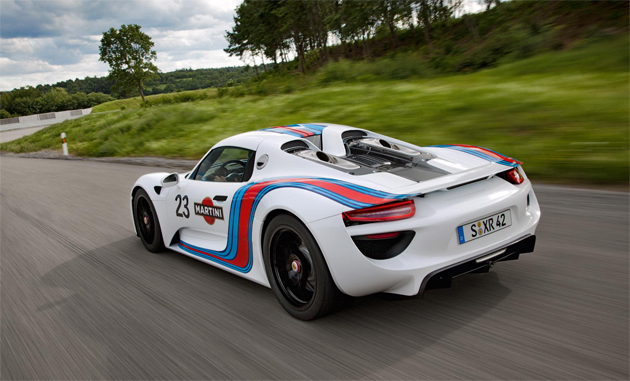 The latest test car is now undergoing circuit laps in the legendary Martini® Racing colours synonymous with historic Porsche race cars, particularly from the 1970s. When they first appeared, the Martini® Racing stripes quickly attained cult status and are still in vogue today.

Martini® was the official partner of the Porsche factory team between 1973 and 1978. The attractively designed ‘Martini® Porsche’ race cars scored numerous wins and became the centre of attention wherever they appeared. Victories included finishing first overall in the Targa Florio, Sicily, in 1973, winning the Sports Car World Championship in 1976 and overall victories at the Le Mans 24 hours in 1976 and 1977. Previously in 1971, a Porsche 917 finished first in the legendary endurance race at Le Mans with the support of Martini®. Whether a Porsche 908, 917, 935 or 936 or one of various 911 RS or RSR models, common to all of these race cars was the memorable Martini® Racing design implemented in a wide variety of forms. 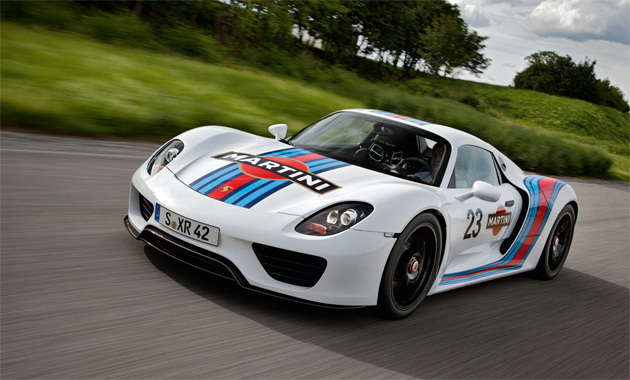 A new edition of this successful partnership is now making the Martini® Racing design exclusively available to the innovative 918 Spyder. Porsche AG and the Martini® brand, represented by Bacardi & Company Limited of Switzerland, have once again signed a partnership agreement to make this possible.