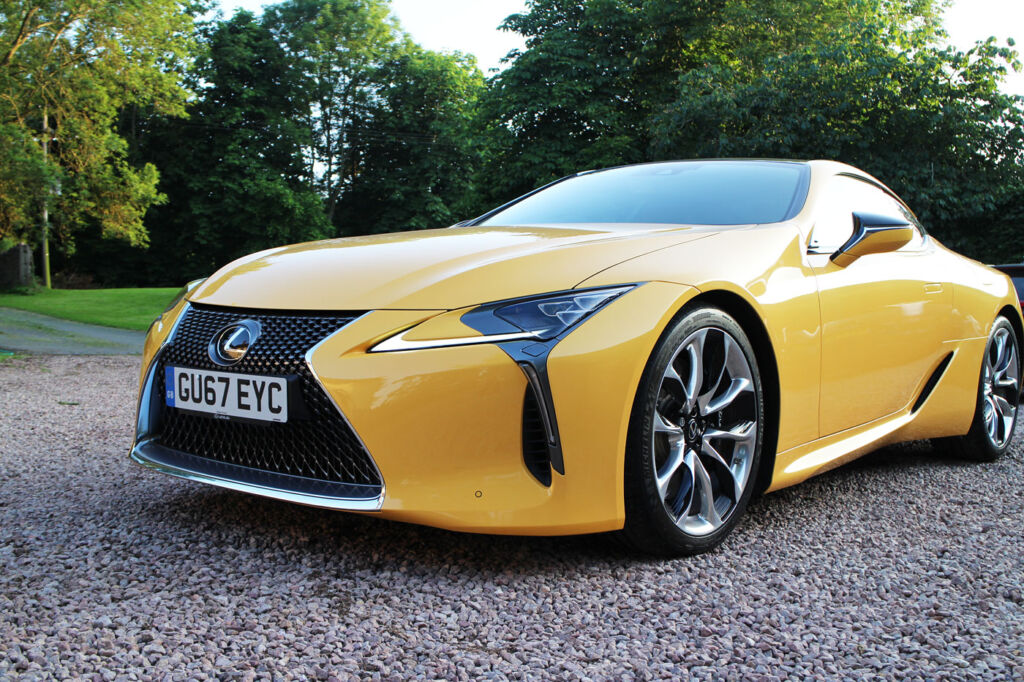 Simon Wittenberg heads to the scenic Malvern Hills to put Lexus’ flagship the Lexus LC500 through its paces.

Based on the award-winning LF-LC concept (LF means “Lexus Future” whilst LC stands for “Luxury Coupé”), which was unveiled back in 2012 at the North American International Auto Show, the Lexus LC500 became a reality five years later following its presentation to the world’s media at Geneva.

Rolling off the same Japanese Motomachi production line that gave birth to the renowned LFA supercar, the rear-wheel-drive and two-tonne LC is built on the GA-L vehicle platform by a team of specially selected and trained Takumi craftspeople. All boast lengthy experience in Lexus manufacturing, and they made the first examples of the LC500 destined for European shores back in May 2017. 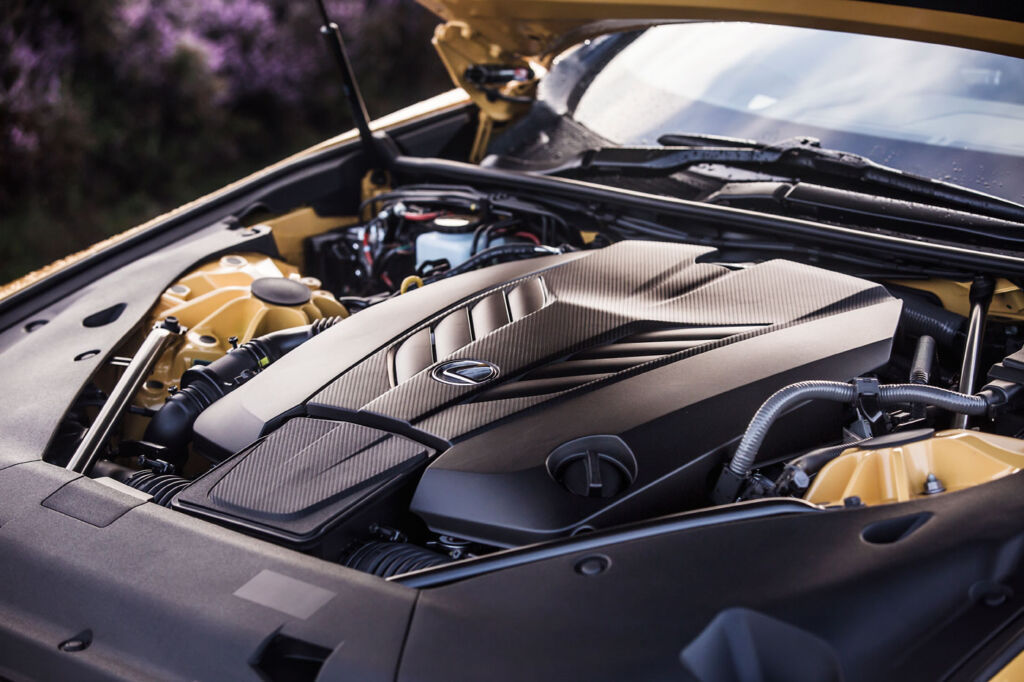 In the line-up, there’s the choice of the full-blown 5.0-litre V8-powered Lexus LC500, which we tried out in Sport + Pack guise, or the more eco-friendly 3.5-litre V6 hybrid (the “h”). Fighting the likes of the BMW 6-Series and Jaguar F-Type R (a fellow 5.0-litre V8 contender), or even the Porsche 911 for custom in the 80-odd grand price bracket, the competition in this upper echelon of the market is without a doubt, stiff.

With just under 300 sold so far since its introduction to the UK, the Lexus is not everyone’s natural choice, but it’s different and has plenty going for it to fight its corner.

The LC500’s exterior is an object of beauty, with a plethora of sharp angles and beautifully-sculpted curves to keep the eyes entertained for endless hours. Accentuated by the striking Naples Yellow paintwork (costing £675 for the privilege) on our test car, there was no getting away from the term “head-turner”.

The familiar Lexus spindle grille with a chrome surround lies at the foot of the long sweeping bonnet, which is flanked by the inward-looking “tick-like” LED running lights, and side air intakes. The carbon fibre roof sweeps down to the rear boot lid where the retractable spoiler can be found. 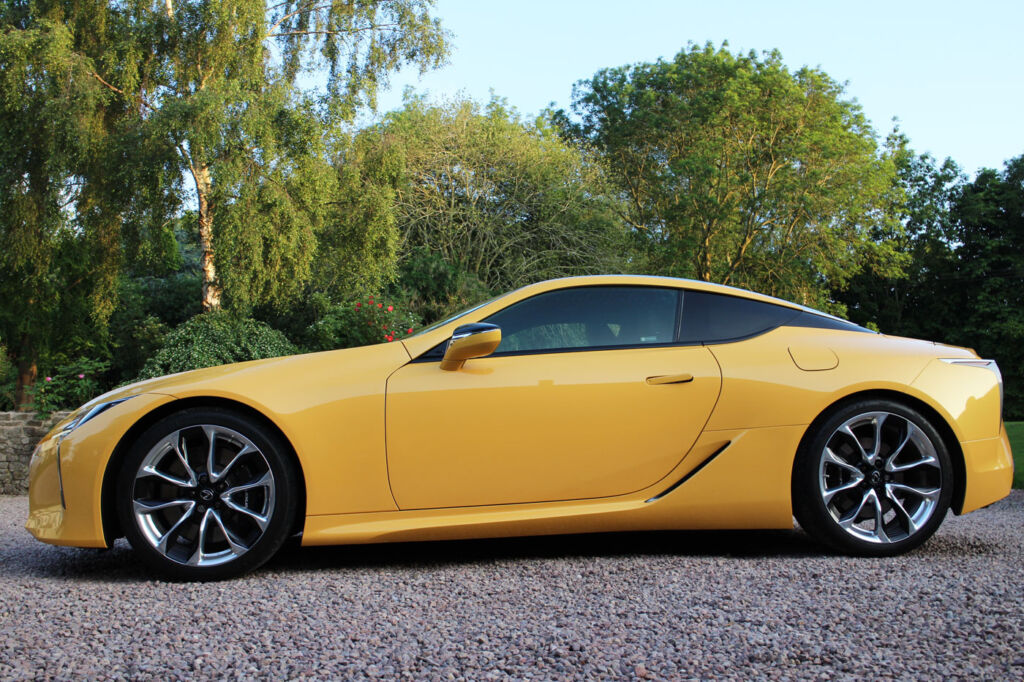 Look to the sides, and you are drawn towards the cleverly-designed wraparound “T-shaped” lamps, which have a slightly hypnotic mirror effect when you peer into them. Underneath, and the diffuser is punctuated by chrome exhaust tips. On the subject of the car’s back-end, the boot, as you would expect with this type of car, is small at 197 litres, but at the same time, it was perfectly spacious enough to hold a small weekend suitcase plus a few bags of shopping.

Into the cabin, and the Lexus LC500 sports a 2+2 configuration, but the seats in the back will do little to accommodate a fully grown adult in a reasonable degree of comfort. A small child possibly at best, but that’s about it if you want to have sufficient legroom when at the wheel. Upfront, there’s the hugging eight-way adjustable heated and ventilated seats which deliver a comfortable and tailored driving position. 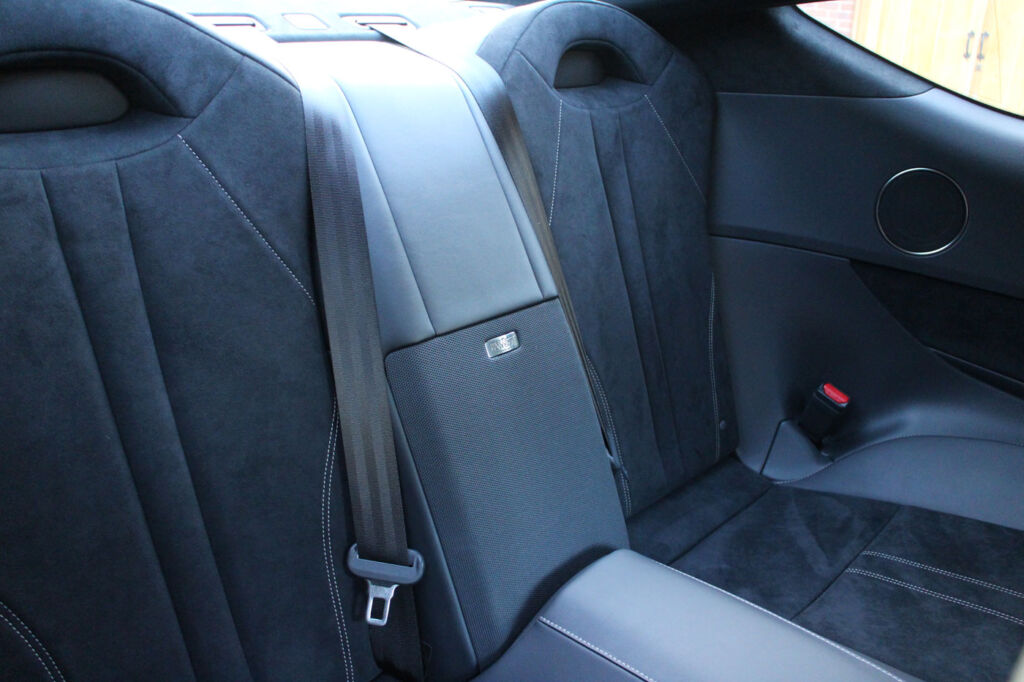 The interior, which is clad in soft-to-touch Alcantara and leather, is nicely laid out, and the centre console which is bound by a handle-like divider, has a lot going on. The central mouse-like touchpad, which is situated behind the nicely-machined chrome volume knob and the gear shifter, takes some getting used to as it’s uber-sensitive. Plus, if the car has been sitting in the sun, it can actually be very hot to touch as we duly discovered.

At the top of the console is where you find the ten-inch screen next to the comparatively old-fashioned analogue clock. This display is the interface for the crystal clear 13-speaker Mark Levinson audio system (a £1,000 option) which is intuitive to use. Nevertheless, what lets the side down is the satellite navigation system which is far from user-friendly, disliking postcodes and needing a degree just to turn it off.

It’s a shame as everything else has been well thought through, and for a car costing close to £100,000, you would expect something a little more sophisticated and refined.