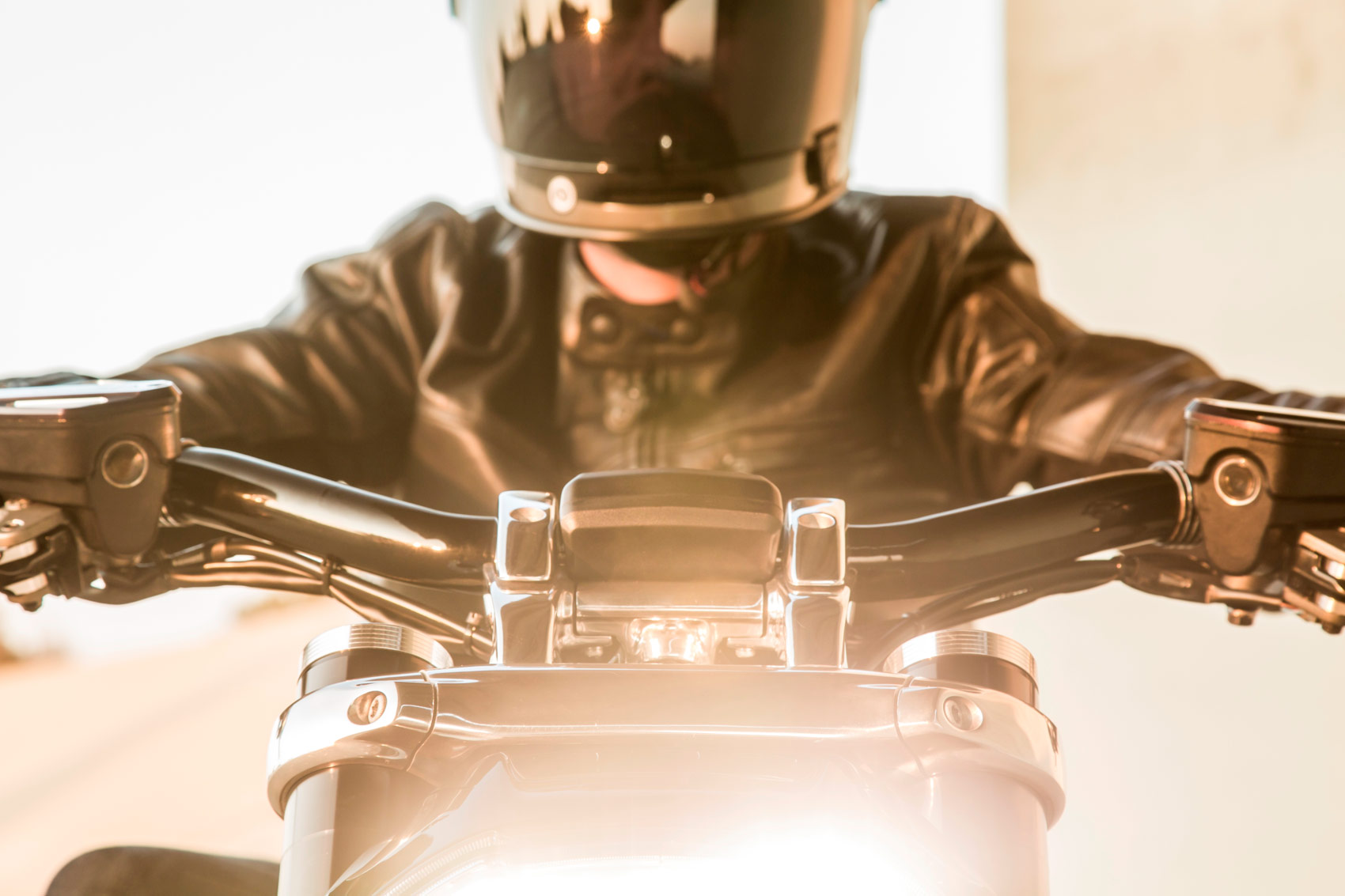 Sturgis is the largest motorcycle rally in the USA and although it is heavily weighted towards American-built bikes, visitors to the event are pure and simple, bike fans irrespective of where it’s made. So what could be better for the attendees than a liberal dose of Italian flair coupled with superb design from California customizer Roland Sands. 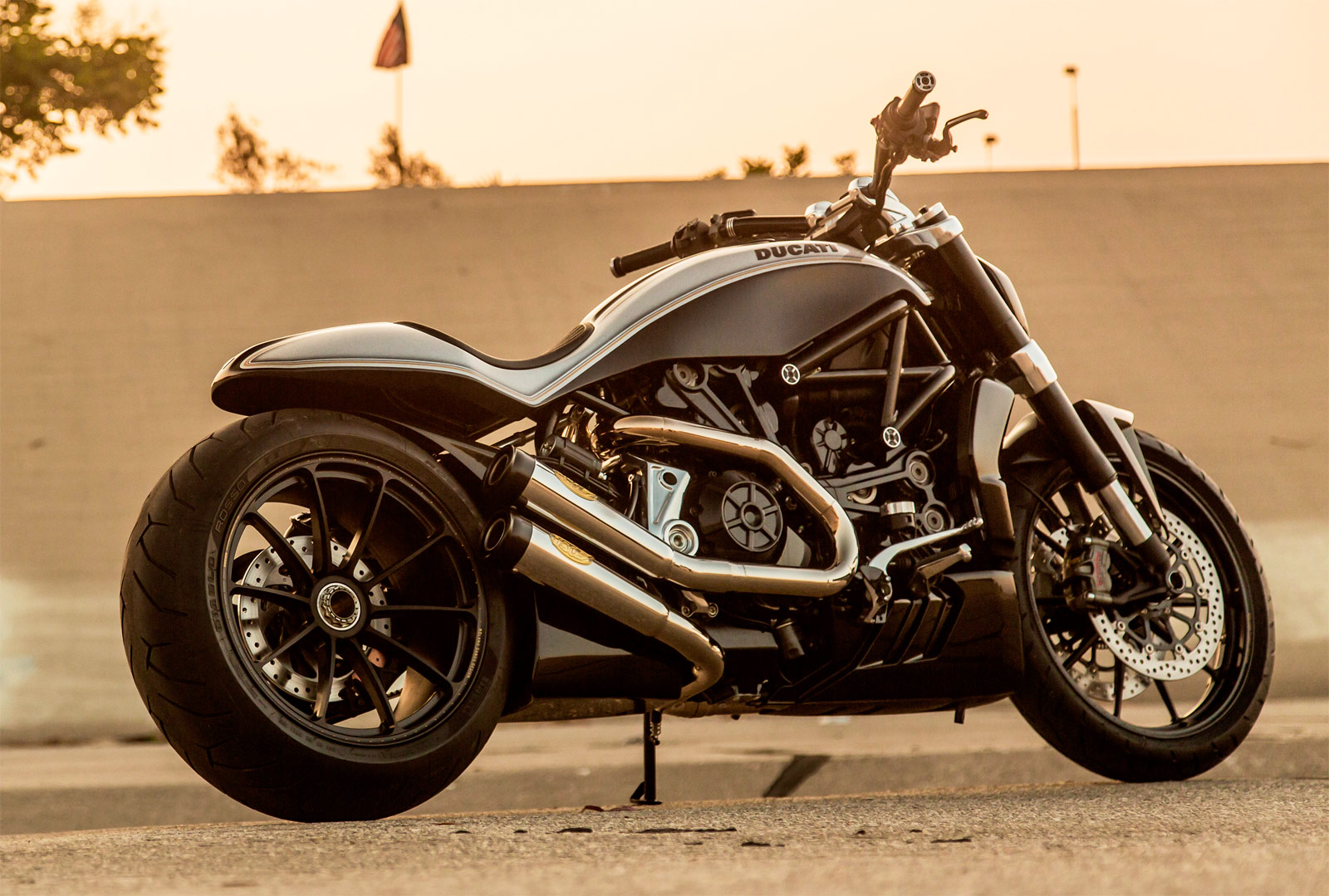 For the 2016 event in South Dakota (the 76th gathering), Ducati joined the throngs, fronted by a gorgeous XDiavel. This was Ducati’s first official participation at the Sturgis Motorcycle Rally and they brought the entire XDiavel world along with them.

The design of the XDiavel is quite unmistakable and this was acknowledged on the world stage when it became a winner in the Red Dot Design Award in 2016. For Sturgis 2016, a new variation of the XDiavel was unveiled with a heavy dose of American design from Californian customizer Roland Sands. At Sturgis, Sands in conjunction with Ducati showcased his own interpretation of the Bologna-built cruiser and it was a beautiful. 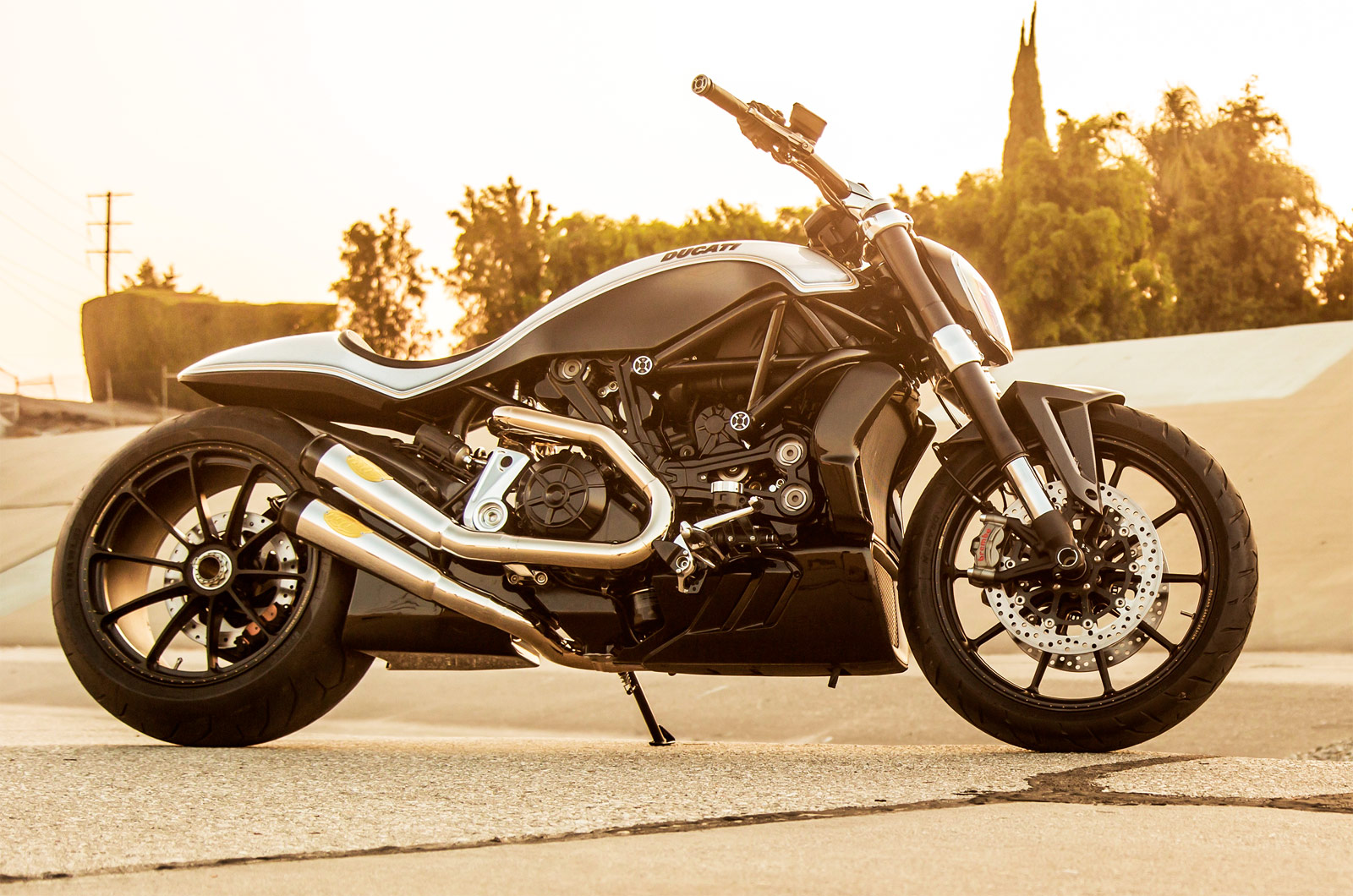 An exercise in pure style, the Roland Sands XDiavel-derived concept bike features a top-class finish and a design that reflects the strong personality of this celebrated Californian customizer. With a one-piece body fixed to the distinctive Ducati trellis frame, a 19” front wheel for a bold look, and a collection of billet aluminum details that deliver a unique result, this XDiavel has transformed into an even more decisive, radical sport-chopper cruiser that still retains its inimitable Ducati DNA.

This very special one-off build was a logical evolution for Roland Sands who has always had a thing for the Ducati cruiser. 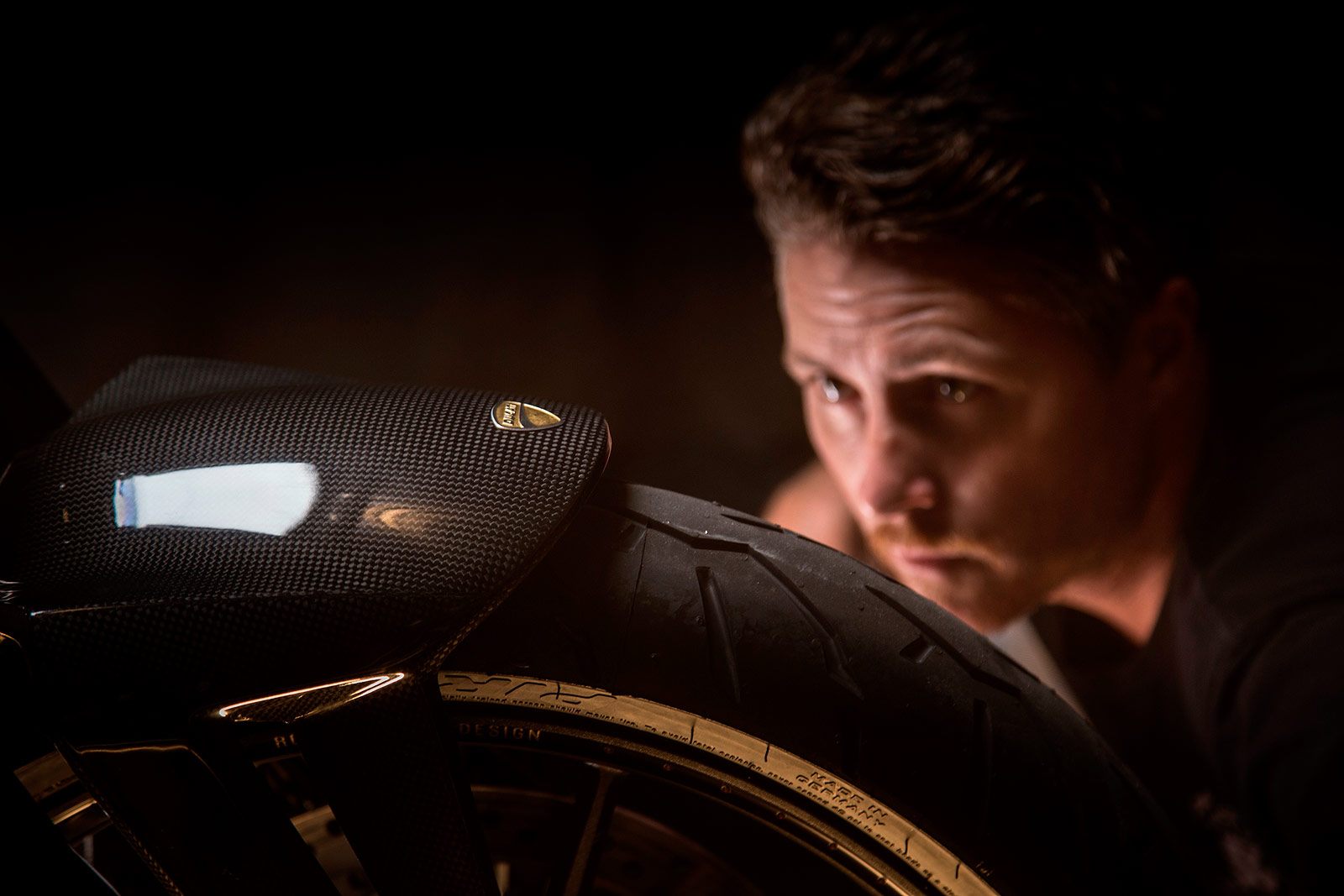 Roland hails from Long Beach in California. Fans looking for a great custom-designed motorcycle shouldn’t be dissuaded by Roland’s youthful looks as his passion for bikes started not long after he took his first steps. His entry into the world of motorcycles came courtesy of a RM 50 dirt bike, given to him on his 5th birthday. After just minutes of riding, he broke a bone! His love of speed on two wheels took him to the professional racing ranks setting multiple track records around the world and in 1988 became the American Motorcyclist Association 250GP champion. However, by fate or design and 32 broken bones later, Roland traded in his racing leathers for a hammer, pencil and a computer to design and build motorcycles and custom motorcycle products. In 2005, Sands founded Roland Sands Design. Sands designs are a mixture of sport bike and chopper influences and he has played a pivotal role in popularizing high-performance custom bikes to the masses.

In addition to the custom design XDiavel, Roland Sands Design has created an exclusive line of special accessories and components, featured in the Ducati Performance catalogue, and currently available at Ducati dealers. 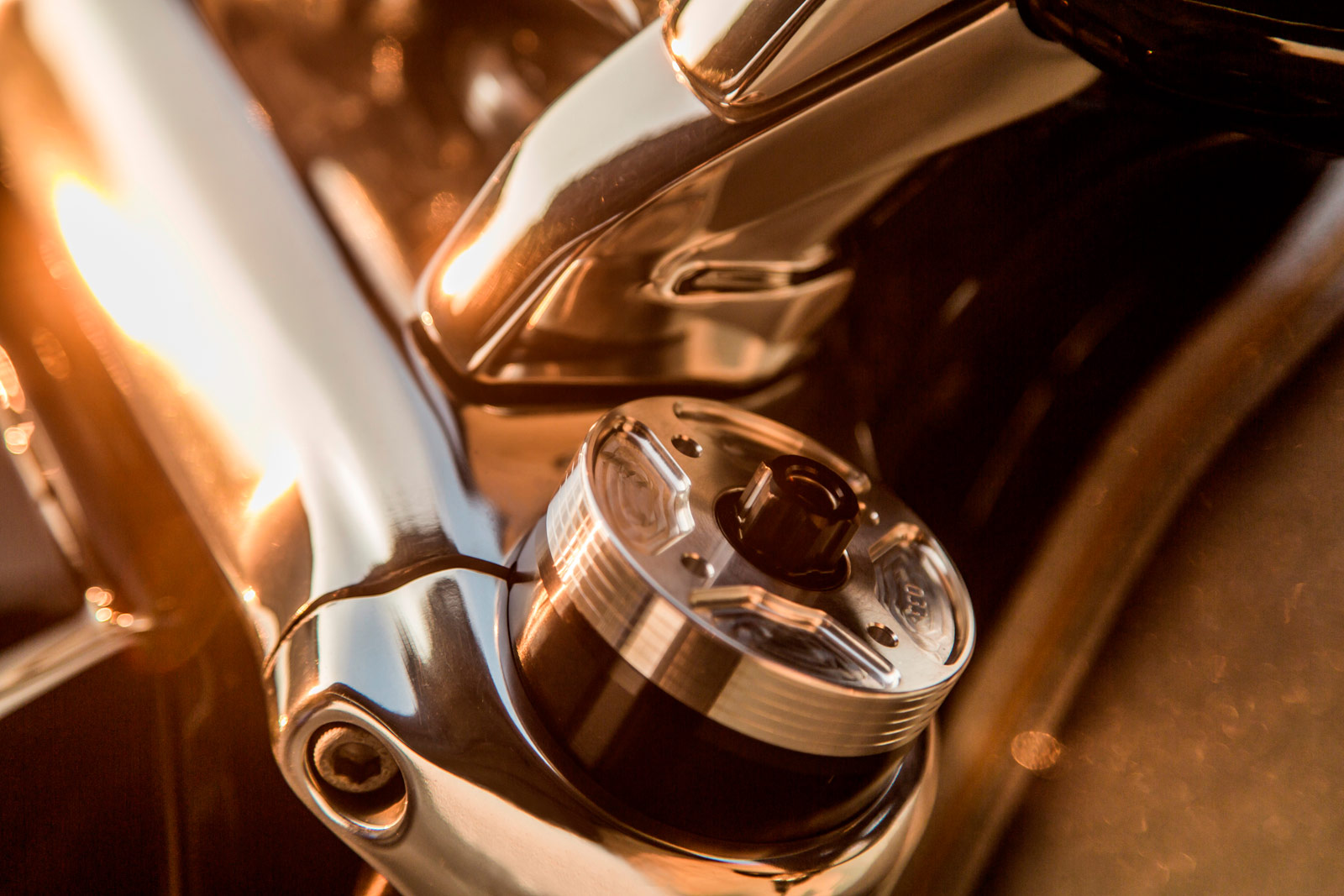 “The response to our presence here at the Sturgis Motorcycle Rally has been exceptionally welcoming. The passion for two wheels, twin-cylinder engines, and beautiful roads is shared by everyone at this gathering of the motorcycle community,” said Jason Chinnock, CEO of Ducati North America. “As motorcyclists, we are part of a tribe, but we also embrace our individuality. This custom-built XDiavel by Roland Sands Design embodies the spirit of personalization that makes this Rally so special. The XDiavel and this interpretation provides us an opportunity to share Ducati with all in attendance.”

“The XDiavel is a beast. A wolf in wolves’ clothing and a serious piece of speed equipment,” said Roland Sands, owner of Roland Sands Design and lead designer on the custom build. “We really wanted to pivot off all that amazing technology and not mess it up by tearing it out. So the bike is still very stock from a functional standpoint. The bike was a 3-month build, with careful consideration and deliberation about the direction of the design. Ultimately, we decided to twist the aesthetic while retaining decidedly ‘stock’ bike functionality. I’m proud to say that’s exactly what we’ve achieved,” said Roland of the build.