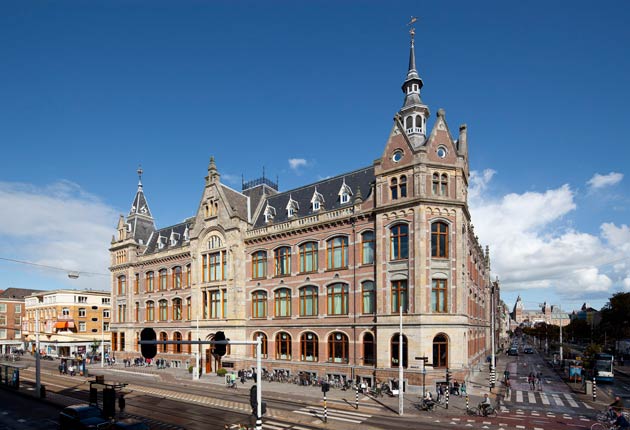 The Conservatorium is located within walking distance of Amsterdam’s Museum Square and Royal Concert Hall (‘The Concertgebouw’). It occupies the same building which was once home to the Sweelinck Conservatory of Music (this has inspired the name of the hotel) and the Dutch savings bank in 1897 when it was first built for the equivalent of €54,600.

The contemporary five-star property opened its doors in 2011, and Roy Tomassen, the former General Manager of The Grove hotel in the UK (which Luxurious Magazine reviewed in 2013), is now incorporating the very best elements of the London property, but at the same time, is also aiming to go one better than his former employer.

The Conservatorium is the first member of ‘The Set’ (a collection of hotels which aims to redfine the concept of luxury) and joined ‘Leading Hotels of the World’ on 01 July 2014. The Milan-based designer, Piero Lussoni, masterminded the amazing and lengthy four year refurbishment of the music school and guests are immediately welcomed by a large open glass atrium where the old architecture has been cleverly combined with the new. It is such a pleasant and comfortable environment to meet and work in that it has actually become the ‘second home’ of many locals, according to Tomassen. There are also hints of the old conservatorium as guests walk around the building such as the suspended violins in the Van Baerle Shopping Gallery.

In addition to a 1000 square metre gym and spa, The Conservatorium houses 120 bedrooms and suites over eight floors. The latter feature state-of-the-art technology such as flatscreen televisions which swivel at the floor, in-wall loudspeakers and bathroom LCD mirror TVs. One of this property’s flagship offerings is in fact the 155 square metre ‘I Love Amsterdam’ suite (starting from around €1,900 per night) which comes complete with its own 1,500-litre bath (that fills up in just six minutes) and a spiral staircase leading up to a private roof terrace which provides stunning 360-degree views of Amsterdam.

Dining is kept to the lower floors and all is masterminded by Schilo van Coevorden, the highly renowned chef. There is a choice of two restaurants: ‘Tunes’, where visitors can enjoy an à la carte or two eight course tasting menus in the former archive of the music school, and the ‘Brasserie and Lounge’ that offers contemporary local dishes for all-day dining. We ate in the Brasserie and sampled the five course Flower Menu in commemoration of Amsterdam’s open garden days.

Dishes included smoked burrata with yellow watermelon and olive oil caviar, carrot risotto, red cabbage with an apple foam base, and lobster and flower salad inspired by Laura Ashley. The ‘Nasturtium’ dessert, which is what really blew our tastebuds away, came in the form of a flower design using crushed dark chocolate for the earth, green ganache marzipan for the stalk and coloured macaroons to represent the petals.

For an after dinner or lunch meander, The Conservatorium is perfectly placed to browse the luxury boutiques of the nearby Cornelisz. Hoofstraat.

Expect to pay €453 (including breakfast) for a Deluxe Guest Room the first Saturday night in August 2014.