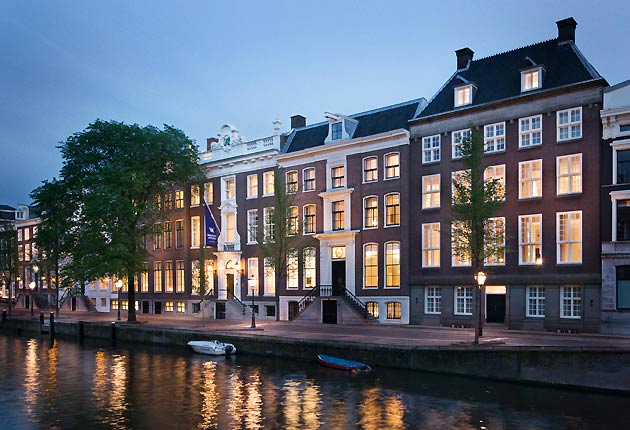 The five-star Waldorf Astoria Amsterdam, which sits on the banks of the Dutch city’s grandest canal, the Herengracht, celebrated its official launch in May of this year.

It follows an extensive refurbishment and amalgamation of six historic 17th and 18th century town houses which are now merely separated by bronze lines. The highly charismatic 64-year-old General Manager, Roberto Payer, who previously turned around Amsterdam’s once ailing Hilton Hotel, has been put at the helm in a bid to make it yet another success for the American group.

The Waldorf Astoria Amsterdam is awash with architectural marvels including the beautiful central staircase and the former welcome rooms which have now become the reception and concierge. The splendour of the houses has been maintained by G A Design International, who was also responsible for the interior of the Corinthia Hotel in London.

Every one of the 93 bedrooms in this magnificent property is different, right up to the 123 square metre, €3,800-a-night Brentano Suite. Each retain the historical charm of the original buildings with beamed ceilings and sash windows. We stayed in one of the 40 square metre (430 square foot) King Deluxe rooms overlooking the large rear courtyard garden (claimed by the Waldorf Astoria to be the largest in Amsterdam). The king bed is furnished with crisp white sheets featuring the Waldorf Astoria logo, feather pillows, plus an extremely soft cotton dressing gown. This category of bedroom also comes complete with a writing desk sporting a Nespresso coffee machine, a large LG 42-inch TV with a plethora of satellite channels, a small sofa and elegant lighting.

The white and grey marble bathroom is equally light and spacious and offers visitors a healthy supply of Salvatore Ferragamo toiletries to help refresh and relax. Payer’s attention to detail is clearly evident, shown by a fresh white rose mounted on the mirror and a small flatscreen TV overlooking the large bath.

When it comes to fine dining, the new Waldorf Astoria prides itself on its gastronomic restaurant ‘Librije’s Zusje Amsterdam’, which has been opened in partnership with the renowned three Michelin star eatery, ‘De Librije’. Executive Chef, Sidney Schutte, now heads up the team at the hotel, incorporating several of the signature dishes and classic items within the Waldorf’s menu. Although we didn’t eat there, we did nevertheless sample a bespoke and mouth-watering vegetarian four course meal made by the very same chefs which included dishes such as brown algae, radish, tomato and Lavas, artichoke with egg yoke, basil, pea, cress and black garlic. Toasted white chocolate with pistachio, cherry and Magnolia was served for dessert, and it was no less than exquisite. At breakfast in the same venue, there is a basic continental buffet offering the likes of Dutch cheeses, cold meats, pastries and fruit, with other hot options available to order upon request.

Additional eateries in this property include The Maurer Room, the Peacock Alley on the Bel Etage – an elegant lounge and dining area with flowing drapery, hand blown glass and classic furniture to give a truly authentic experience, as well as The Vault Bar which is flooded with natural light.

For those feeling a little more active or looking for cutting edge treatments, the boutique Guerlain Spa, which is situated in one of the oldest parts of the building, is a European style natural sanctuary designed in muted grey and earthy tones with warm influences of lavender and honey. The spa also features a ten metre heated indoor swimming pool which is long enough to put in some quick lengths and feel refreshed, but a good workout is best left to the well-equipped gymnasium. There is no Jacuzzi, but guests can nevertheless enjoy the heat of the sauna or steam room.

Expect to pay €515 (including breakfast) for a King Deluxe Room the first Saturday night in August 2014.