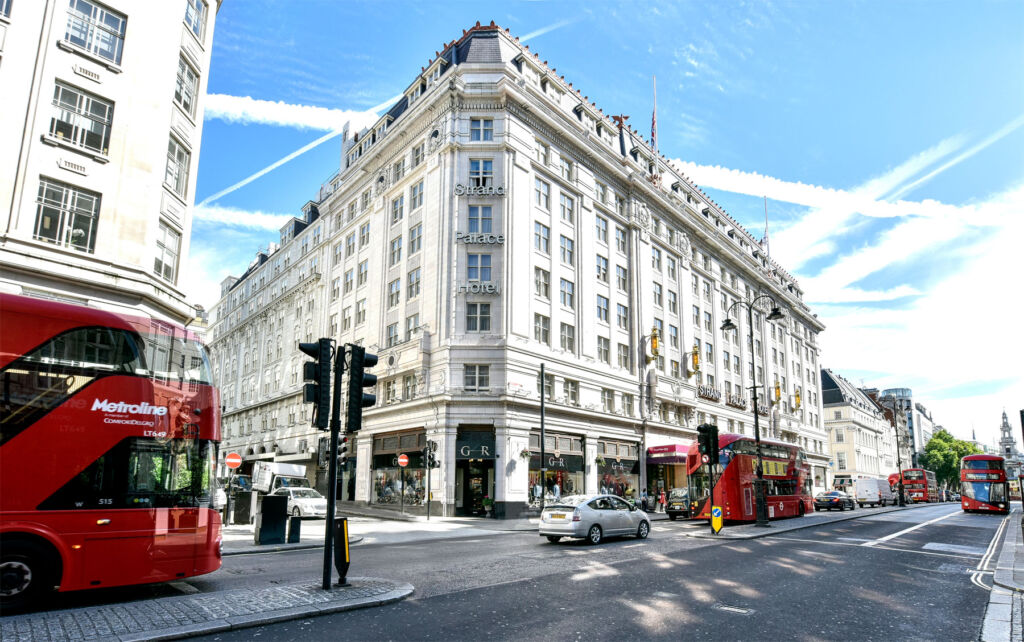 Simon Wittenberg checks into the recently refurbished and luxurious Strand Palace hotel near Covent Garden, the perfect location to explore some of London’s most famous landmarks and attractions.

A hotel steeped in history
Permission was granted in 1907 to build a “grand hotel” on the Strand, one of London’s most iconic streets, and two years later, the Strand Palace opened its doors. Guests paid just five shillings and six pence, the equivalent of 27p per night for a single room with breakfast. In the 1920s, the property expanded, acquiring the Haxell’s Family Hotel next door, with the name continuing today for one of the Strand Palace’s restaurants.

In the early years, the art deco features incorporated into the building proved a hit with visitors, in particular, a hotel which then accommodated American service members during the Second World War. As the country recovered in the post-war era, the Strand Palace underwent a significant modernisation programme, and by 1958, all rooms (there are now 785 sat across nine floors) had their own ensuite bathrooms and coal-fired boilers were retired to make way for those powered by oil. 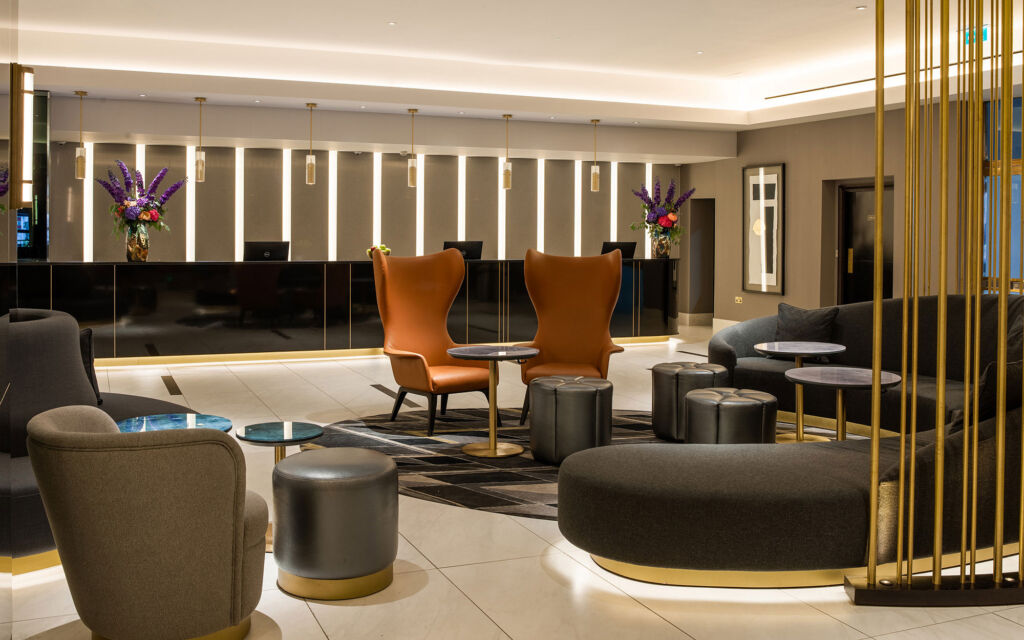 Fast forward to the present day, and the Strand Palace is now in the hands of the investment firm London & Regional Properties (L&R), after buying this property and the 919-bed Regent Palace Hotel on Glasshouse Street near Piccadilly Circus for the princely sum of £105 million. The current décor in the lobby (above) and beyond is the result of a significant multi-million-pound refurbishment programme completed in May 2020, which saw architects having to refer to the original hand-drawn plans, and having to embark on the challenge of removing or repairing existing 100-year-old services, all whilst keeping the hotel open to guests.

The result of the latest investment is a modern and welcoming environment with an art deco twist – a nod to the Strand Palace’s history, with a greater focus on sustainability. For example, button-operated electric showers were installed in every room (there are no bathtubs), alongside low flow taps to further reducing water consumption, whilst new carpets made with over 84,500 recycled plastic bottles, and LED lighting, was also installed.

Free Wi-Fi is available to all guests at this property, and comes without the often-tiresome rigmarole of having to enter loads of information to access it, plus the signal is nice and strong throughout the Strand Palace – not always the case with hotels. 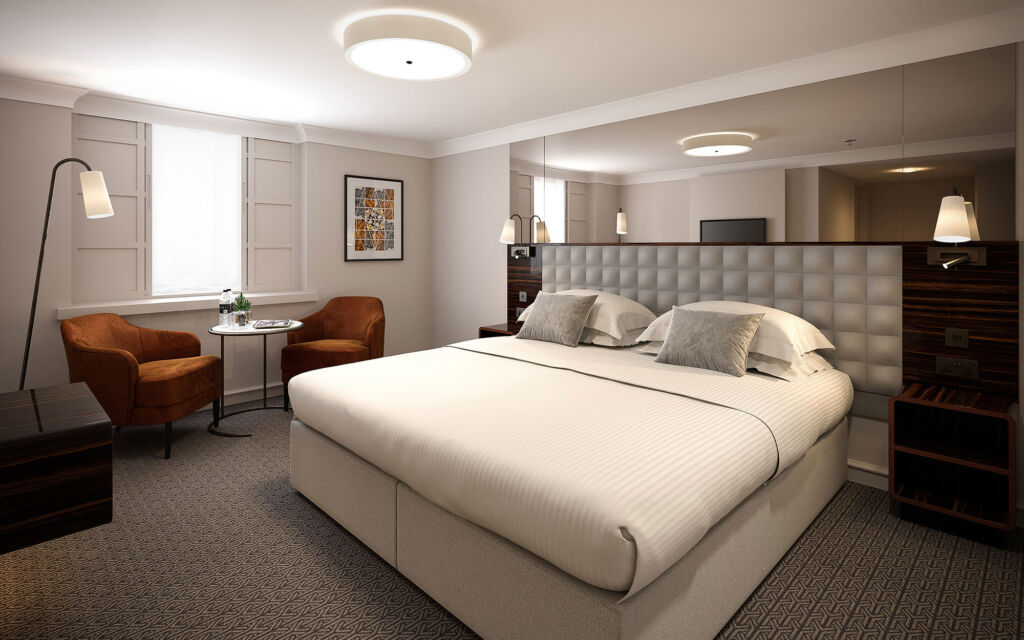 Spacious and modern accommodation
As we were visiting the hotel with a baby, we stayed in one of the Deluxe Studio King Rooms on the eighth floor, priced from £315 per night. Without any advance warning from reception, finding your room takes a little detective work to decipher the map on the landing and work out the direction that you need to go in, as the numbering system is not all that logical. For example, 895 sat opposite our room 837, and whilst we were kindly rescued by a housekeeper, a fellow guest wasn’t so fortunate, and was pacing the corridors with an element of confusion trying to match their key card to a door.

The Deluxe Studio King category of accommodation is designed to accommodate families with children, offering enough space for a pull-out sofa bed and a travel cot (all supplied by the hotel). The inviting two-metre-wide king-sized bed was dressed in crisp white sheets, and sat opposite the sizeable wall-mounted LG TV, the perfect place to catch up on the day’s events.

In one corner was a well-equipped minibar, complete with a Nespresso coffee machine, a variety of biscuits and snacks, as well as bottles of water, which were most welcomed during our sunny weekend stay.

The ensuite bathroom sported a neutral white décor, with an almost optical-illusion cube-type design on the tiled floor, and came complete with nicely-scented accessories from the White Company and a plethora of fluffy white towels.

Overall, it had to be said that the room that we stayed in was adequately spacious and comfortable, with nicely chosen artworks to finish off the modern look conceived during the refurbishment. However, the only disadvantage of it being located on one of the upper floors, and looking out onto the interior of the hotel, was that it was a little noisy, as we were sat just beneath the multiple roof-mounted fans, which were operational day and night. The upside of our accommodation being inward-facing however, is that there was no traffic noise from the bustling streets that surround the Strand Palace. 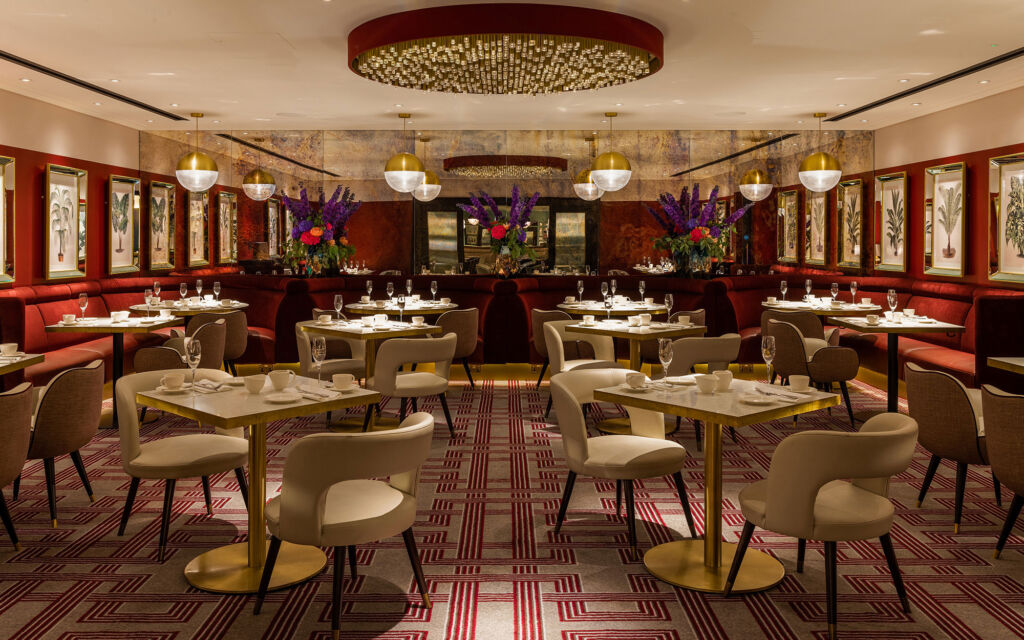 Two in-house dining options
There are two on-site eateries at the Strand Palace hotel, namely Joe Allen, which offers American-style gastronomy, and Haxells Restaurant & Bar, which is located next to the large and spacious lobby and reception area. The latter is orientated around modern British cuisine for lunch and dinner, whilst also supplying afternoon tea to visitors and staying guests. 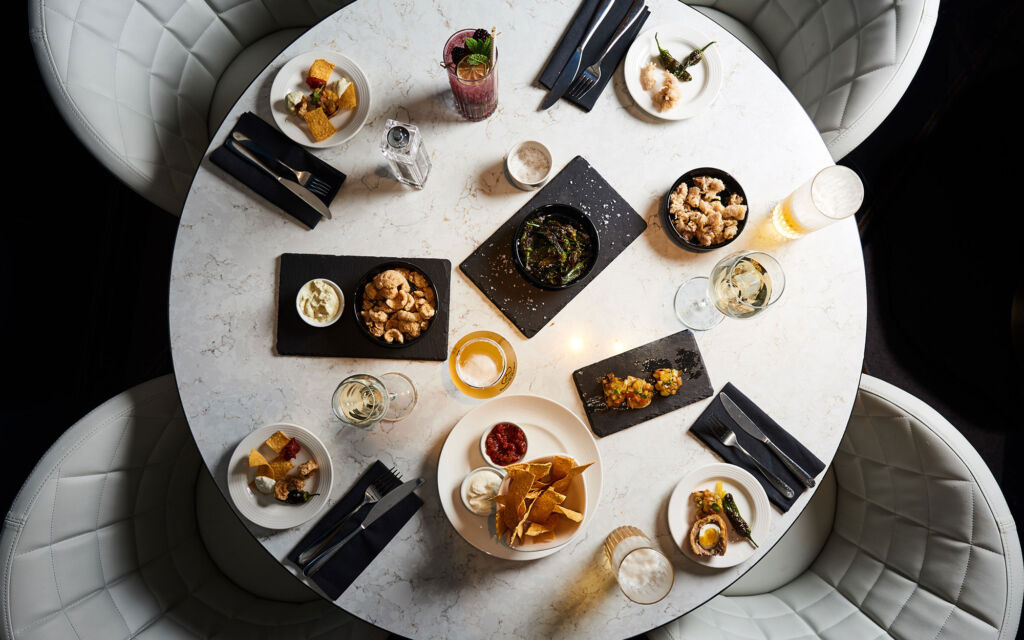 We opted for Haxells for our evening meal, and although the menu is not extensive, there’s still a sufficient element of choice, and covers reasonably-priced vegetarian, carnivorous and fish dishes. Staff also pay particular attention to any specific dietary requirements and allergies, and take the time to double check everything is right before anything is prepared.

In fact, Haxells provides a pleasant smart-casual environment, with curved banquettes in alcoves (where we sat) and smaller tables. Overlooking diners is a collection of ballerina tutus designed by students from the Wimbledon College of Arts, and just by pure coincidence, the designer of the outfit adjacent to us happened to be sitting on the next table.

To start proceedings, and ideal for some pre-theatre bites, we tried three of the “Small Plates” listed on the à la carte for a combined total of £20, which took the form of three pea and Parmesan croquettes with a creamy rice-like centre, a pizza-style flat bread with an artichoke-tasing purée, and garnished with rocket and vegetable crisps, and four chicken skewers with a touch of lemon and coriander. All were excellent, beautifully prepared, and nicely filling.

On to the mains, and I chose the succulent and flavoursome fillet sea bream, served with some tomatoes on the vine, roasted new potatoes which had been subtly sliced, a small dish of hot chimichurri sauce, and all finished with a grilled lemon halve (£18). My other half went for a medium to well-done six-ounce flank steak with vine tomatoes and whole roasted garlic (£18), and we shared some sides of tenderstem broccoli, and some soft and crunchy sweet potato fries (both £5). Once again, the chef and his team impressed, and it was a yet another enjoyable course.

With just enough space left for dessert, there are five different options to tempt the taste buds, and range from £5 to £6 each, so once again, not on the pricey side for a hotel of this kind. I decided on the sumptuously soft chocolate fondant with raspberry coulis, with my wife enjoying a slice of pecan pie. Plates were left clean and rounded off what had been an excellent dinner, and with generous portions throughout, you were left feeling full, but not to the point that you had overindulged at any point.

Haxells is also the location for breakfast, and our host from the night before gave us the handy tip of heading down to the restaurant relatively early in the morning (breakfast is served from 06:30 to 10:30 on a Sunday), as long queues form in the lobby after 9am once the majority of people emerge from their lie-ins.

This was sound advice – our arrival at around 7.45am (thanks to the baby alarm going off early!) meant that we had a relaxed start to the day and avoided the rush hour, coupled with any long waits at the hot buffet, which counts the vital ingredients of a full English breakfast, alongside displays of various bread and cheeses, and an ample selection of pastries. In the bar area, there are a few different juices and fruit of various kinds to take as you wished.

The perfect location to explore London’s many attractions
When exiting the large and spacious lobby area of the Strand Palace, the beauty is that you’re only a short walk away from some of London’s most well-known attractions and landmarks – this is undoubtedly one of the strong selling points of this property compared to some of its rivals. To begin with, you’re in the heart of theatreland, with the Back to the Future musical only a few steps down the street.

Heading south from the hotel, you arrive at the Thames, and heading north is the bustling Covent Garden filled with a plethora of street performers, Leicester Square, and the lights of Piccadilly Circus. Heading down the Strand by turning right out of the main doors, you reach Trafalgar Square, Admiralty Arch, The Mall, and Buckingham Palace, in a matter of minutes.

Greeted with sunshine and blue skies during our weekend stay, we took the opportunity for a stroll over Westminster bridge to another nearby attraction – the London Aquarium. At around £30 per adult ticket, it’s worth investing in a pack of Kellogg’s cereal offering a two-for-one deal if visiting with a fellow grown-up and a small child. With a sprog in tow, it’s the perfect escape away from the crowds gracing South Bank, and the queues for the London Eye.

Caring and attentive from beginning to end
One of the things that strikes you most about the Strand Palace hotel, is just how caring and attentive the staff are, from reception and housekeeping, through to our hosts during dinner. They ensured that we had the best possible stay, and made an effort to strike up a conversation and respond to the many gurgles of the little one. 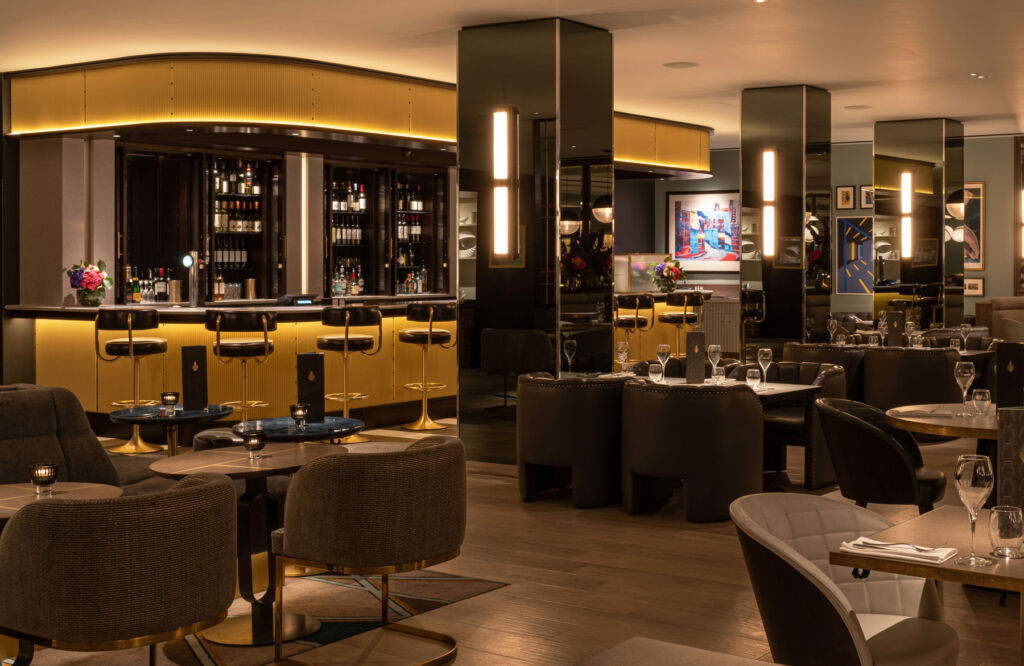 In summary…
The Strand Palace hotel succeeds in its objectives of treating guests to a modern and comfortable experience, with attentive service to match. There is ultimately very little to mark this property down on, so we would happily return should the opportunity arise.

The Strand Palace hotel – Where and How?

The Strand Palace hotel is located at 372 Strand, London WC2R 0JJ, United Kingdom. For more information or to make a reservation, visit www.strandpalace.co.uk. See photos from our stay on the Luxurious Magazine Instagram page.